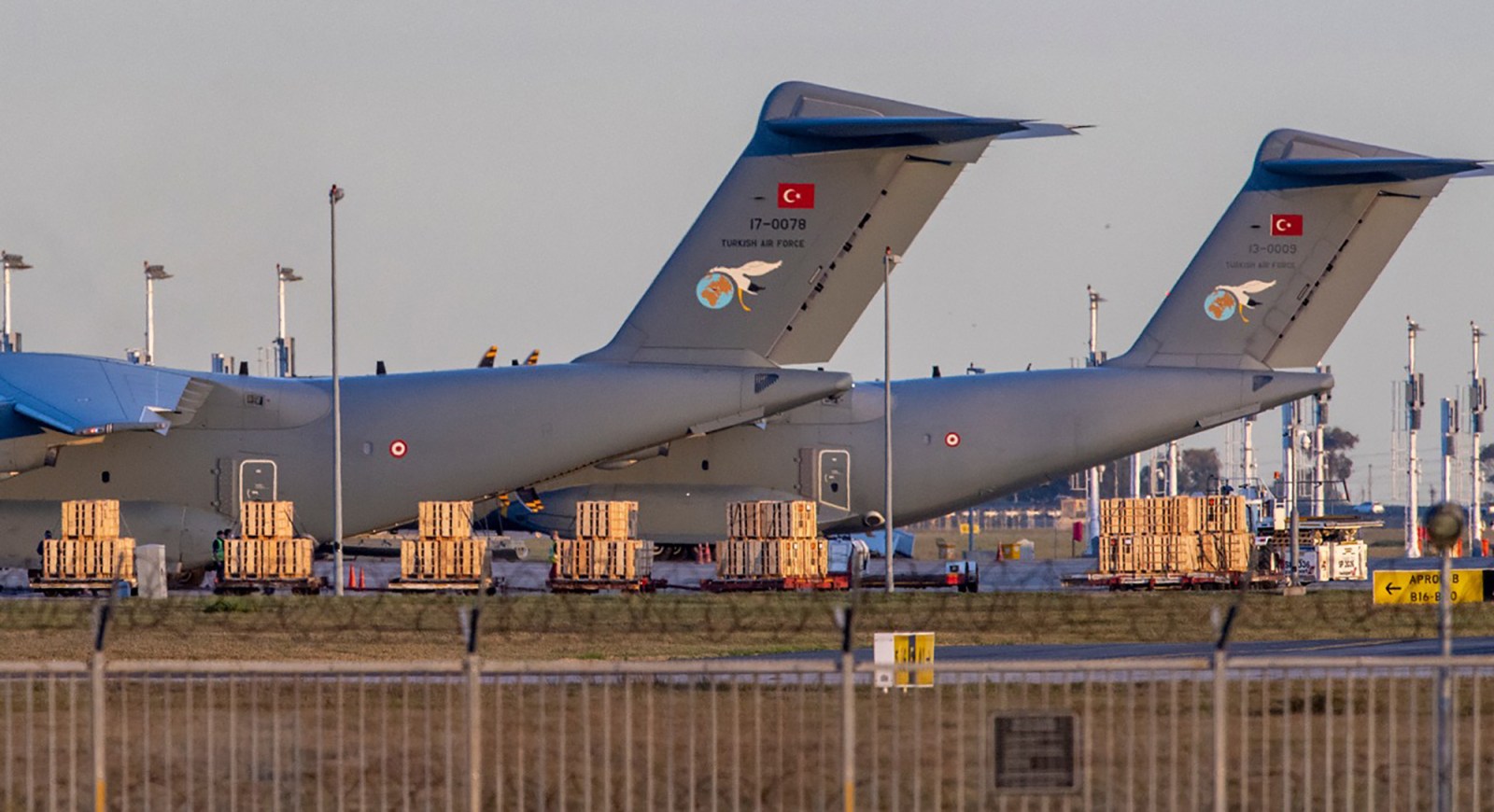 On Thursday an A400M military transport plane, carrying a donation of medical supplies arrived in Cape Town. A second arrived later that day while a third and fourth aircraft on Saturday. At least one more aircraft is expected in the next day or two to pick up what Turkish ambassador Elif Ülgen explained was “some kind of military ammunition” purchased from Rheinmetall Denel Munition (RDM). Only the first arrived with medical supplies on board.

The aircraft were only on the ground for a few hours before returning to Turkey.

Ülgen said she wasn’t aware of the details but said much of the outbound cargo was destined for practice and exercises by the Turkish military. The Covid-19 lockdown has been relaxed in Turkey as recovery numbers have started overtaking new infections. Ülgen said Turkey started doing business with RDM two years ago.

Industry insiders have raised questions over whether this kind of export is permitted under South Africa’s strict lockdown, which has seen movements of cargo restricted mainly to essentials such as food and medical necessities. But Ülgen said the necessary permissions for the sale and export were already done before lockdown.

The supplies are destined for the Machinery and Chemical Industry Institution (MKE) which deals with explosives and ammunition and processes these for the Turkish ministry of defence. “They called me and said they were desperate because the deal was to receive them at the beginning of March,” she said. Since the cargo is explosives, they have to be transported in military aircraft, but when the airspace across Africa went into lockdown, flyover permissions became difficult to obtain.

The first two planes to the Cape Town International Airport flew across West Africa and stopped over in Luanda on the way back. The second batch of planes came across the Horn of Africa, with one stopping over in Somalia to drop off humanitarian aid and medical equipment, Ülgen said. Turkey has thus far sent medical supplies to 57 countries, including the United States. In Africa, it helped Sudan, Guinea, Somalia, Uganda, Lesotho, Mozambique, Tunisia, Algeria as well as Libya, a conflict-torn country where Turkey is also militarily involved.

The Turkish donation to South Africa was relatively small but it was a “token”, Ülgen said. It included 100,000 surgical masks, 100 N95 masks, 500 protective overalls, 500 face shields, 500 medical safety goggles, 200 litres of hand sanitiser and one disinfectant tunnel – including the special disinfectant spray – to put at the entrance of a public building to disinfect those entering.

South African Air Force sources said the Turkish initially wanted to send six flights to land at Langebaanweg Air Force Base, but military intelligence put a stop to this as there is no customs point here to clear the cargo. South African National Defence Force spokesperson Siphiwe Dlamini has not yet responded to queries sent to him on Friday regarding the transaction.

The deal raised questions because local lockdown regulations only allow for the transport of essentials like food and medicine. But an insider said the industry in South Africa isn’t in complete lockdown and some business is going ahead even though most production has stalled. Lockdown regulations do not stipulate anything about the export of military supplies.

South Africa’s National Conventional Arms Control Committee head Ezra Jele said the committee usually meets at the end of the month, but it hasn’t met since February since the country went into lockdown at the end of March. He could, however, not say exactly when exactly the Turkish transaction was approved.

“The permit must be valid because if it’s not valid the [military supplies] can’t leave the country. The decision was taken before the state of disaster,” he said. “It was dealt with long before the February meeting.”

RDM did not want to comment on the transaction. Spokesperson Ruby Maree said she’s not in the office due to the lockdown. “In general, due to the nature of our business we are not allowed to disclose any information about our customers or orders. I trust you understand.”

Military analyst Helmoed-Römer Heitman speculated that the transaction could likely have been for pyrotechnics such as flares, smoke grenades and blank rounds if they are to be used in military exercises. He also said it could have included rocket motors or missile warheads.

“The Turks have a design office up here [in South Africa] that designs missiles for production in Turkey, and I suppose it is possible that some initial batches might use South African bits,” he said.

Turkey’s involvement in conflicts in countries like Libya and Syria have given rise to fears that the apparent urgency of the purchase was related to this, but at this point there is no proof of this. South African President Cyril Ramaphosa has reportedly urged Turkish President Recep Tayyip Erdogan in January not to deploy any troops to Libya. This is one of the conflicts Ramaphosa said would be prioritised by the African Union during South Africa’s year in the chair. DM