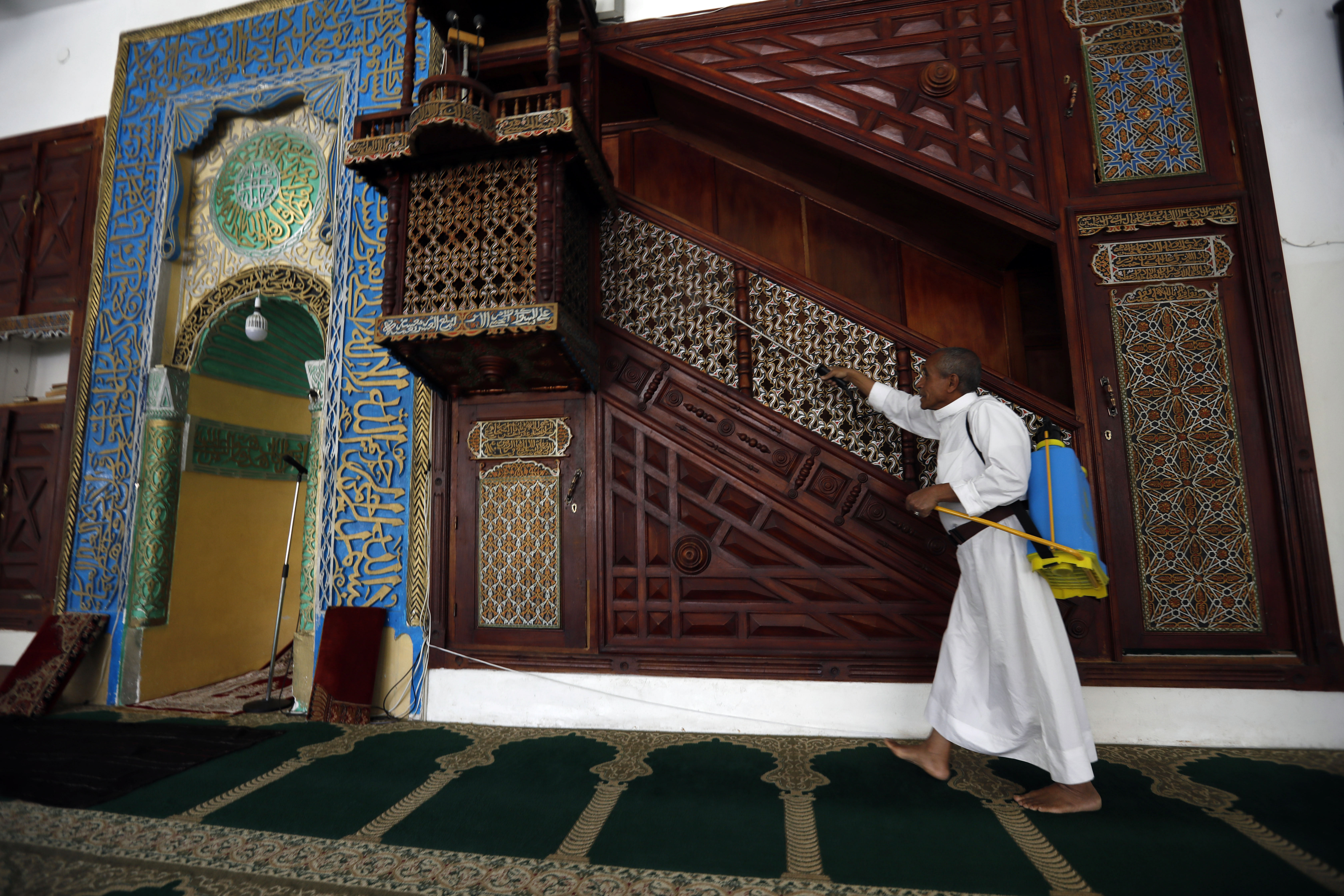 epa08392189 A worker sprays disinfectant inside a mosque amid the ongoing coronavirus initiated COVID-19 pandemic in Sanaa, Yemen, 24 April 2020 (issued on 29 April 2020). According to reports, Yemen has reported five coronavirus cases in the southern city of Aden, a day after UN relief officials warned that the COVID-19 pandemic has been circulating undetected in the war-ravaged Arab country. EPA-EFE/YAHYA ARHAB

ADEN, April 30 (Reuters) - Yemen reported multiple coronavirus infections and deaths linked to the disease for the first time on Wednesday and an official in the southern port of Aden said the number of cases was very likely to increase in the coming days.

The United Nations has said it fears the novel coronavirus could be spreading undetected in a country where millions face famine and lack medical care after Yemen announced its first COVID-19 case in the southern Hadhramout province on April 10.

Yemen has been mired in conflict since the Houthi group ousted the internationally recognised government from power in the capital Sanaa, prompting a Saudi-led alliance to intervene in March 2015. The war has shattered health and sanitation systems and authorities lack testing capabilities.

The Saudi-backed government’s health minister told Yemen TV late on Wednesday that five COVID-19 cases with two deaths were reported in Aden and noted that the prevalence of other diseases with similar symptoms, such as dengue fever, made it difficult to detect coronavirus infections without testing.

“We have all been waiting for this moment and preparing for it despite our scarce (health) capabilities,” said an official in the separatist Southern Transitional Council (STC), which on Sunday declared self-rule in Aden and other southern regions.

“Yes this is yet another suffering for us but we must be firm, calm and patient … It is very likely the numbers will increase in coming days,” Abdul Nasser al-Wali said.

The STC, which is locked in a power struggle with the Saudi-backed government in its interim seat in the south, on Wednesday declared a three-day, 24-hour curfew and closure of mosques.

Authorities have told Reuters they have been unable to track down “patient zero” for Yemen’s infections, an important step in tracing people potentially exposed to infection and containing an outbreak.

On Tuesday the United Nations said there was a “very real probability” the virus was circulating within communities.

Health workers say the virus could spread rapidly in a country where 24 million people – 80% of the population – rely on aid, and 10 million are at risk of famine. Disease is rife.

Two sources familiar with the matter have told Reuters there has been at least one confirmed case in Houthi-controlled Sanaa, but the movement’s health ministry denied this and said all suspected cases had tested negative for COVID-19.

On Wednesday the Aden-based government’s emergency coronavirus committee voiced concerns that Houthi officials were not admitting to a coronavirus outbreak in the capital.

The Saudi-led coalition has declared a temporary nationwide ceasefire due to the pandemic as the United Nations seeks to hold a virtual meeting of the warring parties to cement a permanent truce, coordinate coronavirus efforts and restart peace talks.

The Iran-aligned Houthis, who control most big urban centres, have not accepted the truce and violence has continued.

Tensions also resurfaced in the south after the STC declared emergency rule, threatening to renew conflict between the separatists and the Saudi-backed government, both part of the anti-Houthi coalition. (Reporting by Mohammed Ghobari and Nayera Abdallah; writing by Samar Hassan and Ghaida Ghantous; Editing by Kim Coghill and Jon Boyle)