Will we see a post-Covid China-Africa reset? 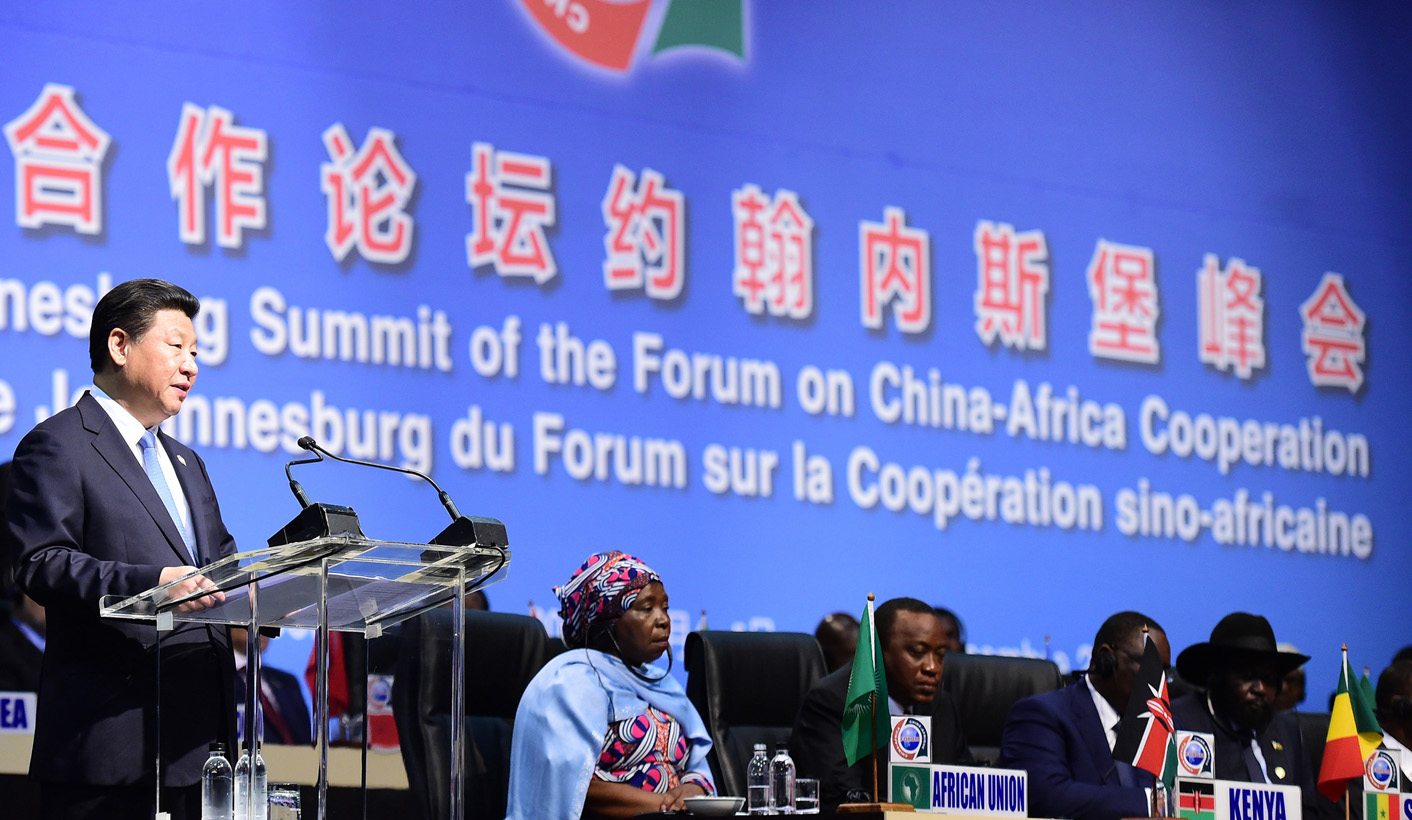 Chinese President Xi Jinping addresses delegates at the opening of the Forum on China-Africa Co-operation (Focac) Summit in Sandton in 2018. (Photo: GCIS)

South Africa has fallen back on its old foreign affairs game by talking ‘left’ in expressing revolutionary solidarity for Cuba, Venezuela and Iran. This time the polemic has a parallel track in the journey, cap in hand, to the World Bank and IMF, while seemingly paying lip service to liberal economic reforms. Yet will the Covid-19 crisis force a change in policy direction in Africa, externally and internally, in particular concerning the continent’s relations with China?

Stepping back from the day-to-day predictions and prognostications about Covid-19, two things are of longer-term interest concerning the politics of recovery in Africa:

On the first question, the immediate answer depends in part on who appears to have done better in managing the Covid crisis. This understanding is influenced invariably by the availability of information. If China has – or is perceived as having – done better than the West in managing the crisis (and we probably will never know entirely), this could embolden calls for a more powerful and authoritarian state and centralised administration. The extension of powers under national crisis conditions has already given some leaders a taste of dictatorship.

There are pluses and minuses for African leaders of this outcome.

Following more closely a China model offers the prospect of more efficient delivery without the bother of managing the politics of the economy. Covid and the lockdown enables statists to display their power and prowess – one only has to look at the instances of bully-boy enthusiasm of the South African National Defence Force in cracking down during the lockdown.

Many African leaders might like the idea of the Chinese system because it offers the prospect of staying in power and making money, rather than because of the development advantages of an efficient, centralised state.

But democracy protects leaders and citizens. The Nirvana of relatively unobstructed, unfettered power does not provide the constitutional and institutional safeguards for leadership. Unlike the Asian development experience, post-colonial African history saw a slide into militarism, autocracy and incessant instability, not least because the government lacked the competition and competency to deliver prosperity.

In a vicious cycle, this is because the state is weak and fragmented. It is one thing to mobilise against a common enemy (coronavirus) or for a short-term national goal (the World Cup); it is another to keep this machinery up, running and motivated for the longer term, not least because it is expensive.

The Chinese model comes at an immense political and economic price. This includes (but is not limited to) the cost of exchange rate manipulation to remain competitive in trade, and continued infrastructure investment to drive demand for commodities, job creation and urban expansions. These aren’t costs that many African governments can afford to incur, without falling ever-deeper into a debt trap.

Statist overreach by African governments – mimicking the developed world’s response in a developing world reality on behalf of elites – can only have dramatic and negative economic consequences. These will, sooner rather than later, inevitably have a political impact. Populism thrives in situations of dearth and excess, and desperation.

It is also not clear where the emergency anti-coronavirus provisions end and the benign development state supposedly takes over. African history suggests that this authoritarian path is invariably costly and fraught with personalised, fragmented interests. The benefits of this path depend, also, on the flow of external capital, skills and technology. Yet the dilution of democracy suggests that investors will be less forthcoming absent constitutional and legal safeguards, and donors are less likely to invest beyond humanitarian assistance.

The political resilience of African citizenry also might well surprise in this regard. Africa is not China. African democracy is not a system which was once upon a time benevolently handed out by leaders; it is the system favoured by the vast majority of citizens given the previous experience. And its freedoms have been hard fought for in most instances.

The answer to the second issue – what changes the pandemic might bring in external relations – in part depends on the outcome of the first, and to the nature of global engagement post-Covid.

China might well face other areas of push-back, not least given the allegations of the poor treatment of Africans in China during the Covid pandemic, and calls for China to pay damages for its role in the spread of the virus. Also, a surge of other sources of debt might shift attention away from China as a source of capital. The outcome will depend, as ever, on how all these partners respond: Africa, China and Western lenders.

This crisis has laid bare Africa’s differentiation, often overlooked in sweeping descriptions of the continent as “hopeless” or “rising”, one where there are “lions on the move”.

But one generality is accurate. The continent is likely to become increasingly debt-stressed as a consequence of Covid. This reflects the debt position of African countries before Covid, the depth of their domestic markets and resources, and their options today. It also relates to the extent outside actors and specifically Chinese institutions are willing to renegotiate African debt.

It’s now a case of all hands on deck with debt and funding. The IMF released emergency funds to at least 39 countries in March. The World Bank has expedited $14-billion for crisis relief, and earmarked more. The Bretton Woods institutions have also called on the G-20 group of creditor nations to suspend collecting interest payments on loans they have made to low-income countries. On April 15, the G-20 agreed to do so until the end of the year – all except one: China.

According to Benn Steil and Benjamin Della Rocca, writing in Foreign Affairs, China loaned more than $120-billion to 67 mostly developing nations through its Belt and Road Initiative (BRI) for infrastructure development. Beijing has, they report, caveated “preferential loans” such as those made by the Export-Import Bank of China (EximBank) for debt relief, thereby making “a mockery” of the G-20 pledge.

EximBank has financed more than 1,800 BRI projects in dozens of countries. As Steil and Della Rocca conclude:

“By continuing to demand interest payments on the loans, China will force poor nations to choose between servicing debts and importing essential goods such as food and medical supplies. Some BRI projects, such as the Standard Gauge Railway loans to Ethiopia and China, for example, are believed (since these are opaque arrangements) to carry interest rates of around 8%, double the cost of capital to the Chinese lenders.”

According to their analysis, since 2013, “China has provided nearly half of all new loans to nations considered to be at a high risk of default”. Ethiopia owes nearly 20% of its GDP to China, South Africa some 4%, or $14-billion, and Kenya more than 11%.

And they will now inevitably take on more, as governments try to reinvigorate stagnant economies post-Covid.

Remember Jubilee 2000, the Highly Indebted Poor Countries (HIPC) initiative, Bono on the White House lawns, and the Gleneagles G8 “Make Poverty History” summit? Under the debt relief provisions of the early 2000s, Africa was forgiven more than $100-billion in debt. In effect, these measures supported subsequent Chinese debt issuance. It is unlikely that G20 nations will want to similarly support Chinese debt maintenance.

If Beijing does not offer debt relief, it will stand accused of profiting from Africa’s poverty, and gaming the international development system. Jack Ma’s generosity with face masks and testing kits notwithstanding, without commitment on financial relief, China’s relationship with Africa will be exposed as shallow and transactional.

Beyond Covid-19, a step-change in debt flows to Africa based on a “freedoms’ means test” on delivery and governance is what Africa’s performers and their citizens want and need.

The question is: Can donors offer this disaggregated alternative? DM

Dr Mills and Van der Merwe are with the Johannesburg-based Brenthurst Foundation, and are co-authors of the recently released The Asian Aspiration: Why and How Africa Should Emulate Asia – and Why It Should Not (Picador).