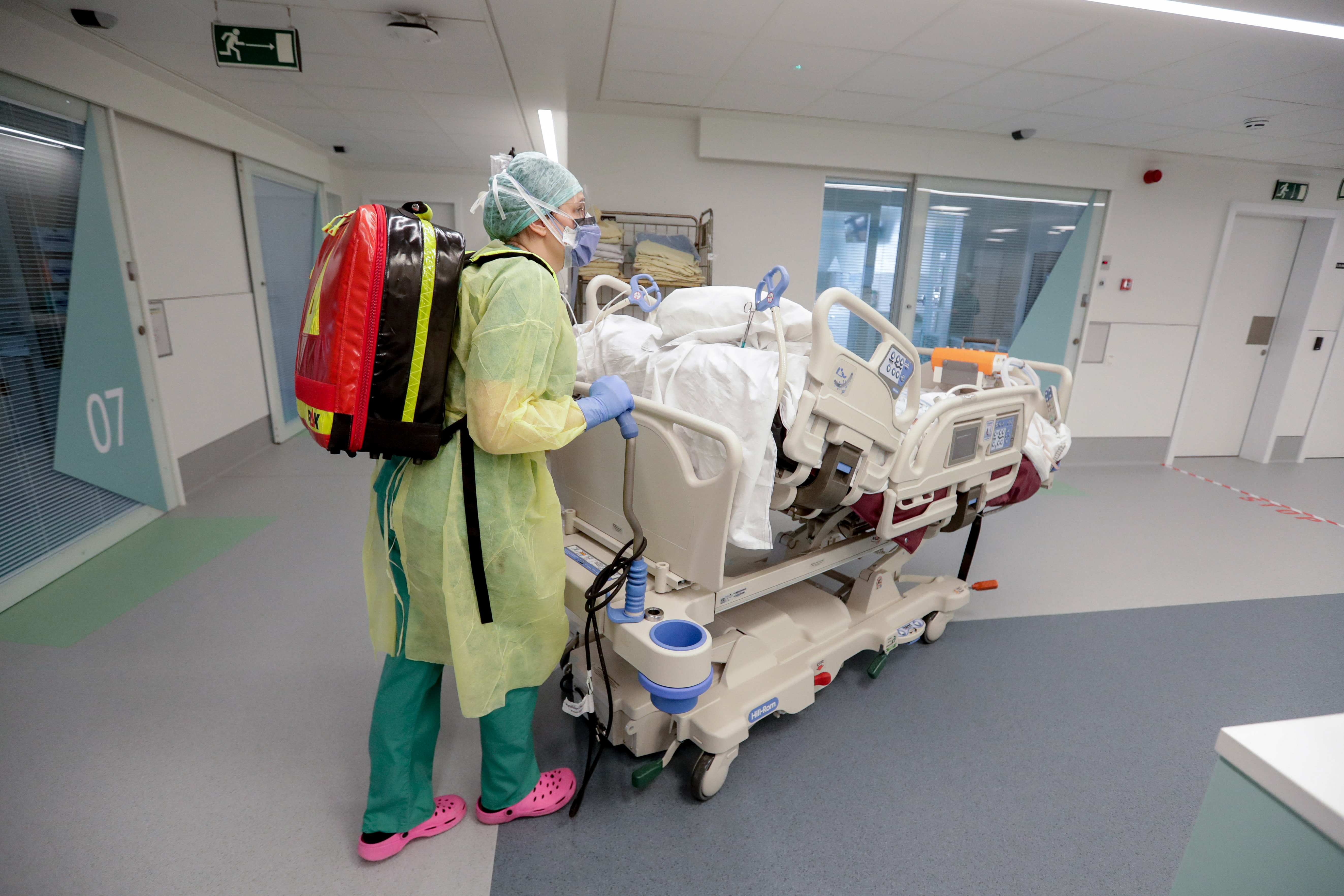 epa08392183 A COVID-19 patient is cared for by the nursing staff in order to perform a lung scan at the Etterbeek-Ixelles site of the Iris Sud Hospitals in Brussels, Belgium, 29 April 2020. Countries worldwide increased their measures to prevent the widespread of the SARS-CoV-2 coronavirus which causes the COVID-19 disease while crucial businesses like grocery stores, pharmacies, public transportation and health services are still open. EPA-EFE/STEPHANIE LECOCQ

Preliminary results from a U.S. government trial showing that patients given remdesivir recovered 31% faster than those given a placebo, were hailed by Dr. Anthony Fauci as “highly significant.”

“This is really quite important,” Fauci told reporters at the White House, likening it to a moment in 1986 “when we were struggling for drugs for HIV and we had nothing.”

“This will be the standard of care,” he said.

The U.S. Food and Drug Administration said it has been in discussions with Gilead about making remdesivir available to patients as quickly as possible, but the agency declined to comment on any plans to grant the drug regulatory approval.

“I want them to go as quickly as they can,” President Donald Trump said, when asked if he wanted the FDA to grant emergency use authorization for remdesivir. “We want everything to be safe, but we would like to see very quick approvals, especially with things that work.”

The closely watched drug, given by intravenous infusion to hospitalized patients, has moved markets in the past few weeks following the release of data from several studies that painted a mixed picture of its effectiveness, and Fauci cautioned that the latest data still needs to be analyzed.

Interest in remdesivir has been high as there are no approved treatments or preventive vaccines for COVID-19, and doctors are desperate for anything that might alter the course of the disease that attacks the lungs and can shut down other organs in severe cases.

Doctors have been eager for results from the NIH study because it is a large trial in which patients were randomized to treatment with the drug or a placebo without participants or doctors knowing which group they were in – the gold standard for clinical trials.

Gilead earlier this month said it was prepared to donate to hospitals its existing supply of 1.5 million doses of remdesivir, which it said was enough for more than 140,000 patients, although that number would increase if the drug could be given for a shorter duration. Regulatory approval of the drug would clear the way for commercial sales.

“We are working to build a global consortium of pharmaceutical and chemical manufacturers to expand global capacity and production,” Gilead Chief Executive Daniel O’Day said in an open letter on Wednesday.

He also said Gilead is looking at ways to potentially bring the treatment to a broader patient population by investigating other formulations and means of delivery.

The study showed a trend toward better survival for remdesivir – 8% of patients given the drug died compared with 11.6% in the placebo group – but the difference was not statistically significant so may not be due to Gilead’s drug.

The trial’s lead researcher told Reuters on Friday that full results could come by mid-May.

“The full dataset will provide more clarity on how remdesivir can best be used,” said Dr. Aneesh Mehta, a researcher on the NIH trial from Emory University School of Medicine in Atlanta.

Despite the excitement, Dr. Lawrence K. Altman, global fellow at The Wilson Center in Washington, DC, was not ready to celebrate the preliminary findings.

The new data “offers a glimmer of hope” that remdesivir has an effect against COVID-19, but more scientific analysis is needed “comparing them to other studies of the drug that have shown mixed results,” he said in a statement.

Also on Wednesday, results were published by the Lancet medical journal of a trial conducted in China that concluded remdesivir failed to improve patients’ condition or reduce the pathogen’s presence in the bloodstream. Gilead said previously that those findings were inconclusive because the study was terminated early.

“The drug seems to have antiviral activity – how much is as yet unclear,” Dr. Daniel McQuillen, an infectious disease specialist at Lahey Hospital & Medical Center in Burlington, Massachusetts, told Reuters. “Seems likely that it might need use with another antiviral agent.”

Combination antiviral treatments have proven highly effective against other diseases.

Gilead also provided data on a study in severe COVID-19 patients it has conducted in dozens of medical centers, which does not have a placebo comparison but tested the drug under five-day and 10-day regimens.

In that 397-patient trial, Gilead said clinical improvements were similar regardlesss of treatment duration, and patients treated early on with remdesivir did better than patients who were treated later in the course of infection.

Remdesivir, which previously failed as a treatment for Ebola, is being tried against COVID-19 because it is designed to disable the mechanism by which certain viruses make copies of themselves and potentially overwhelm their host’s immune system.

The company is also studying the drug in patients with less severe COVID-19, but those results are not expected until later next month. (Additional reporting by Timothy Ahmann and Steve Holland in Washington, D.C. and Carl O’Donnell in New York; Editing by Bill Berkrot and Lincoln Feast.)

Robben Island appears to be on a literal road to ruin