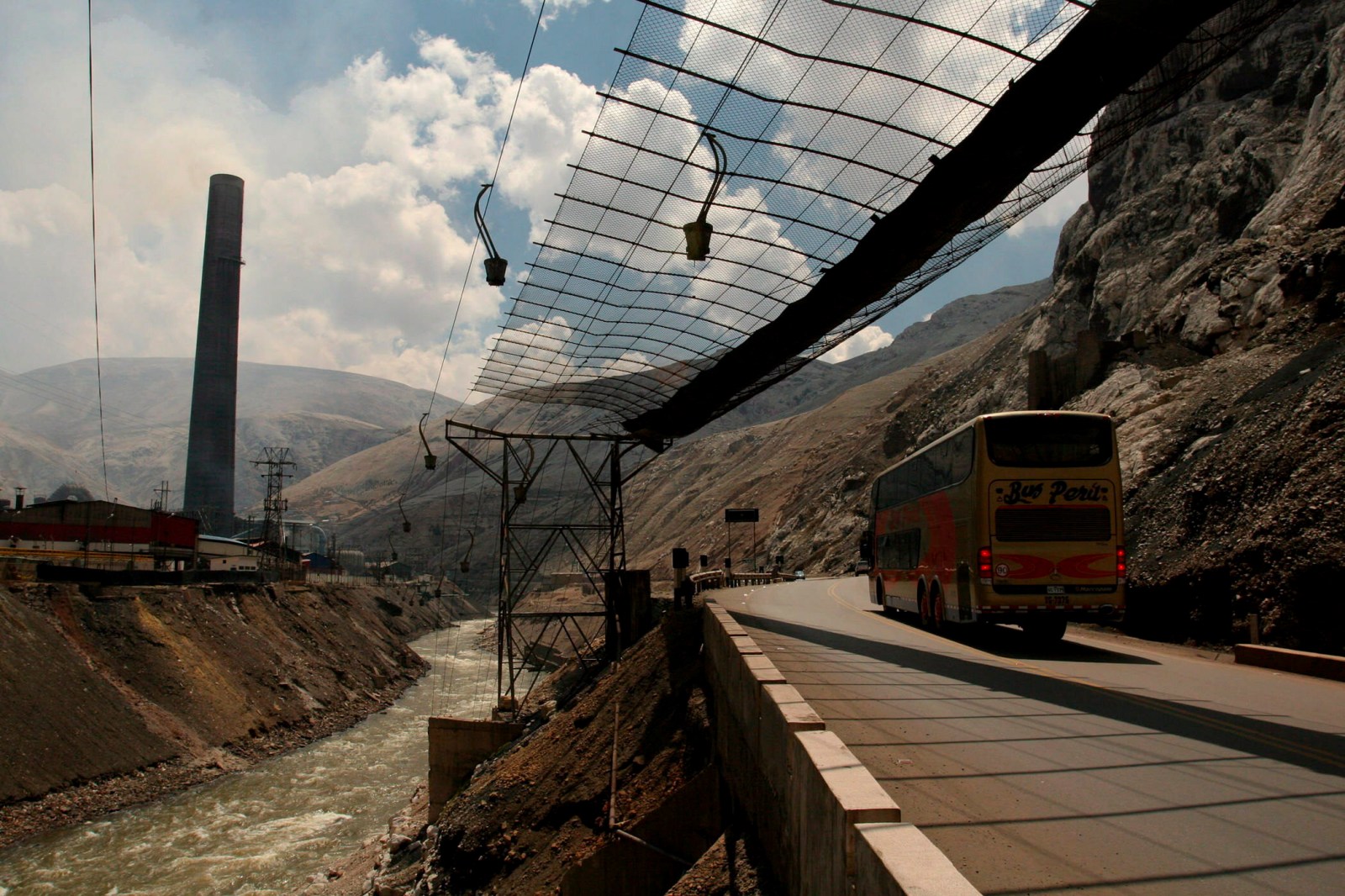 epa01011768 (FILES) This file picture dated 30 April 2007, shows a passenger bus passing through Peru's largest mining region, known as 'La Oroya'. Heavy mining and its metallurgical plants have resulted in serious health concerns for the 30,000 residents of La Oroya, some 150 kilometers from the capital Lima. The La Oroya production facilities were built in 1922 and many villages are becoming 'ghost-towns' as a result of the environmental impact of zinc, lead and copper extraction from the mountains nearby. EPA/PACO CHUQUIURE

JOHANNESBURG/LIMA, April 28 (Reuters) - As mining heavyweights South Africa and Peru move to lift coronavirus lockdowns, workers in deep mines are resisting going back to work without adequate protective gear and information about cases at sites, with one major union filing legal action against restart plans.

The workers fear being literal canaries in the coal mine in facilities where social distancing is nearly impossible and warn that companies are not divulging coronavirus cases, putting them at risk.

South Africa, the world’s largest producer of platinum, manganese and chrome ore, is letting its mines run at half-capacity after a national lockdown. Peru, which hopes to end its own lockdown on May 10, is the world’s No. 2 copper producer and No. 6 gold producer.

“Reopening the mines without proper regulation in place is a really bad idea for workers and for the communities that they come from,” said Richard Spoor, a lawyer for South Africa’s Association of Mineworkers and Construction Union (AMCU), which represents more than 250,000 miners. “It’s a bad idea for mining, frankly.”

A ruling is expected soon after an April 29 hearing. On Tuesday, AMCU President Joseph Mathunjwa said the union needs to know workers are safe before they return to mines.

South African mining companies are pushing for a restart, saying 10% of the industry’s workforce could lose their jobs and 15% of its output is threatened.

Logistics will still hamper any resumption. South African miners are restricting bus loads to mine sites to 20 workers at a time, even though the cages used to transport workers underground hold up to 1,000. Companies plan to limit the amount of people allowed in the cages at one time and conduct screening of symptoms before allowing entry down the shaft.

Copper and platinum prices are down about 16% and 21% since the beginning of January, respectively. Gold prices have risen, partly on the metal’s safe-haven appeal.

Unions in both countries are openly encouraging members not to return to mines. At least one executive in South Africa has been arrested for flouting safety standards.

Peru’s Antamina copper mine did not follow national lockdown regulations in mid-March even after dozens of workers contracted COVID-19, the respiratory disease caused by the novel coronavirus, three sources said. Union workers moved to shut down the mine in mid-April and the company suspended most operations the next day, the sources said.

The mine, controlled by BHP Group Plc and Glencore Plc, initially reported only seven COVID-19 cases to officials. One of Peru’s major mining unions has asked the government to inspect the mine to ensure its lockdown compliance.

BHP and Glencore referred questions to Antamina, which said it had adhered to Peru’s emergency rules but was granted a government exemption to focus on essential maintenance tasks, which applied to all miners. Antamina said it cut on-site staff to about 30% of usual headcount, and boosted cleaning and employee health monitoring.

Staff that left the mine have been quarantined and Antamina is conducting testing, said spokesman Martín Calderón Uceda.

“Initial tests indicate that there are more positive cases than expected,” he said on April 24.

On Monday, Antamina said it has done 600 tests for COVID-19, with 210 testing positive. About 87% of those testing positive are asymptomatic and 17 required medical attention.

The pushback against mining restarts could expand to Chile, Burkina Faso, the United States and other countries, where mine workers are making similar demands, potentially crimping global supply of key metals.

Most global miners did not halt open-pit operations amid the pandemic because they were considered an essential economic activity.

In Brazil, Vale SA is using thermal cameras to scan the body temperatures of workers while Barrick Gold is stockpiling antibody testing kits and Rio Tinto and BHP are pushing workers to spend weeks on site, rather than rotate home and potentially be exposed to the virus.

Despite the steps, mine workers globally are uneasy.

“How essential is mining right now?” said Kari Johnson, 58, a forklift operator at ArcelorMittal SA’s Hibbing Taconite in Minnesota. The company does not provide pay for employees who self-quarantine, a policy that Johnson and her union are trying to change.

ArcelorMittal said all operations staff are deemed essential in the United States, but employees who test positive for COVID-19 and go into quarantine are eligible for benefits.

U.S. workers are going directly to the national regulator to report any employers with lax safety standards. The United States does not require miners to report the number of employees that test positive for COIVD-19.

In Burkina Faso, workers at Endeavour Mining Corp’s Hounde mine say they have been shunned by friends and family after their facility became one of the first in Africa to report a coronavirus case.

“In any part of a mine there are many people who circulate, in a control room or in a smelter,” said a worker at Chile’s Codelco, the world’s largest copper miner. The worker’s temperature is tested on the daily bus ride to the site.

“You don’t know who is healthy and who is not.” (Reporting by Tanisha Heiberg and Helen Reid in Johannesburg and Marco Aquino in Lima Additional reporting by Melanie Burton in Melbourne, Ernest Scheyder in Houston, Fabian Cambero in Santiago, Tumelo Modiba in Johannesburg and Henry Wilkins in Ouagadougou; Writing by Ernest Scheyder Editing by Amran Abocar and Matthew Lewis)