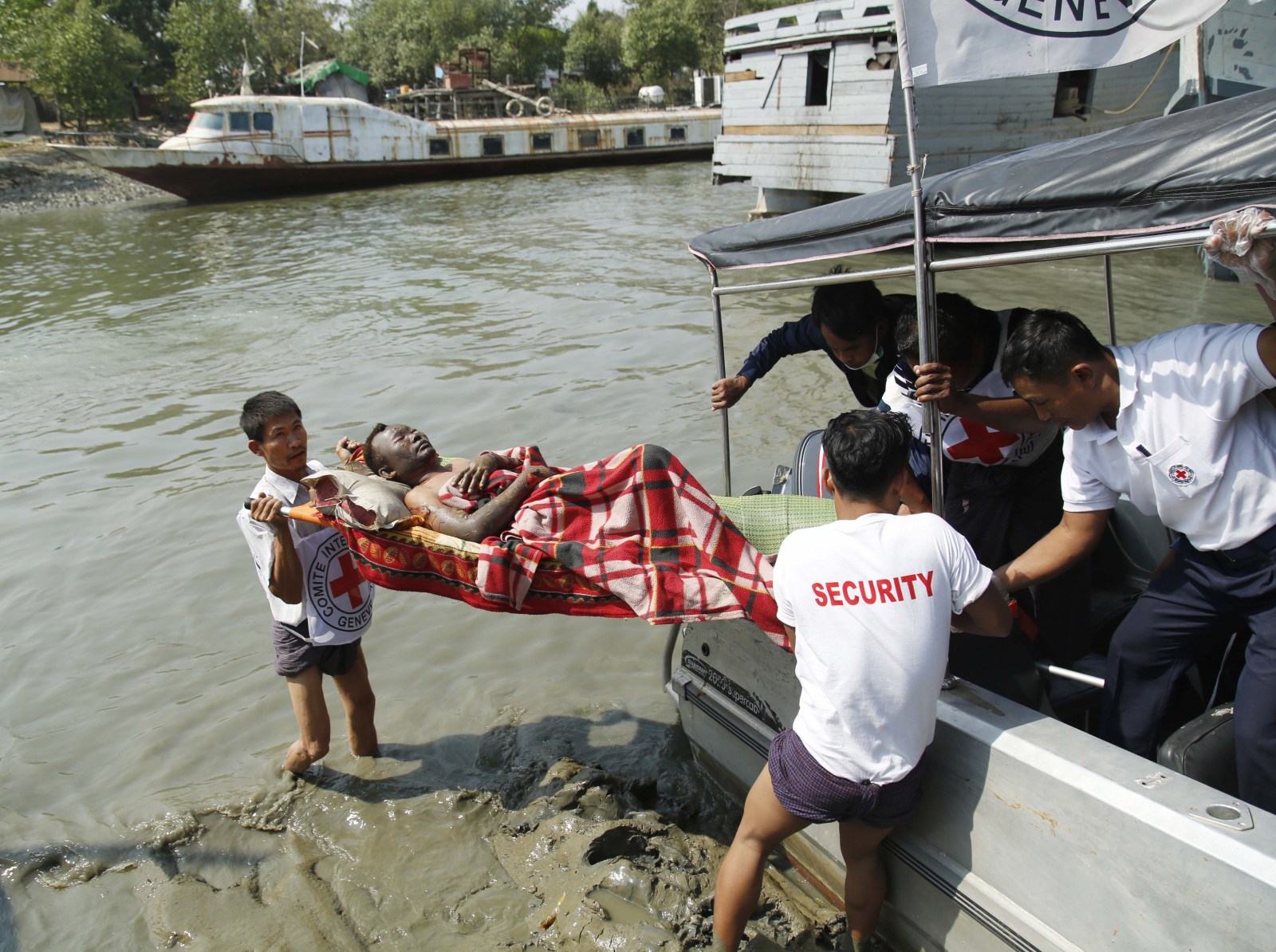 epa08317521 Members of the Myanmar Red Cross society move a wounded man from a boat to an ambulance that will transport him to Sittwe Hospital, in Sittwe, Rakhine State, western Myanmar, 24 March 2020. The man, who comes from Chay Taung village near Min Bya township, was wounded during fighting between the Myanmar military and the Arakan Army (AA) near Min Bya township on 23 March 2020, as the Myanmar government declares Arakan Army (AA) a terrorist group on the same day. According to local media reports, approximately 100,000 residents are living in temporary camps across Rakhine State as fighting continues between the Myanmar military and the Arakan Army. EPA-EFE/NYUNT WIN

April 29 (Reuters) - The departing U.N. human rights envoy for Myanmar said its military may be committing war crimes and crimes against humanity in Rakhine and Chin states, where fighting between government troops and ethnic minority rebels has intensified.

“While the world is occupied with the COVID-19 pandemic, the Myanmar military continues to escalate its assault in Rankine State, targeting the civilian population,” Yanghee Lee said on Wednesday in her final statement after six years as rights envoy, calling for an international investigation into the allegations.

The South Korean special rapporteur said the armed forces, known as the Tatmadaw, have ramped up attacks against civilians in recent weeks with air and artillery strikes that “may amount to war crimes and crimes against humanity”.

The government has repeatedly refused requests by Lee to enter Myanmar. She has previously accused the army of genocide and other war crimes against the Rohingya Muslim minority in Rakhine in 2017, when some 700,000 fled an army crackdown.

The army and government have consistently rejected such accusations and said the military was responding to attacks by Rohingya Muslim insurgents.

Government troops and fighters from the Arakan Army, which wants greater autonomy for Myanmar’s western region and recruits largely from the region’s Buddhist majority, have been locked in fighting for more than a year, but clashes have intensified recently.

Dozens of people have been killed and tens of thousands displaced.

Lee also urged the Arakan Army, which has been accused of kidnapping officials, to protect civilians. The group did not immediately make a public statement in response.

Lee criticised the targeting of aid workers, referring to a driver for the World Health Organization killed last week. Government troops and rebels blamed each other for his death.

“Calls for a ceasefire, including by the Arakan Army, have gone unheeded,” she said.

“Instead, the Tatmadaw is inflicting immense suffering on the ethnic communities in Rakhine and Chin.”

The Arakan Army declared a month-long ceasefire for April along with two other ethnic minority guerrilla forces, citing the pandemic. The military rejected the ceasefire, with a spokesman saying a previous truce declared by the government went unheeded by insurgents. (Editing by Robert Birsel, Matthew Tostevin)