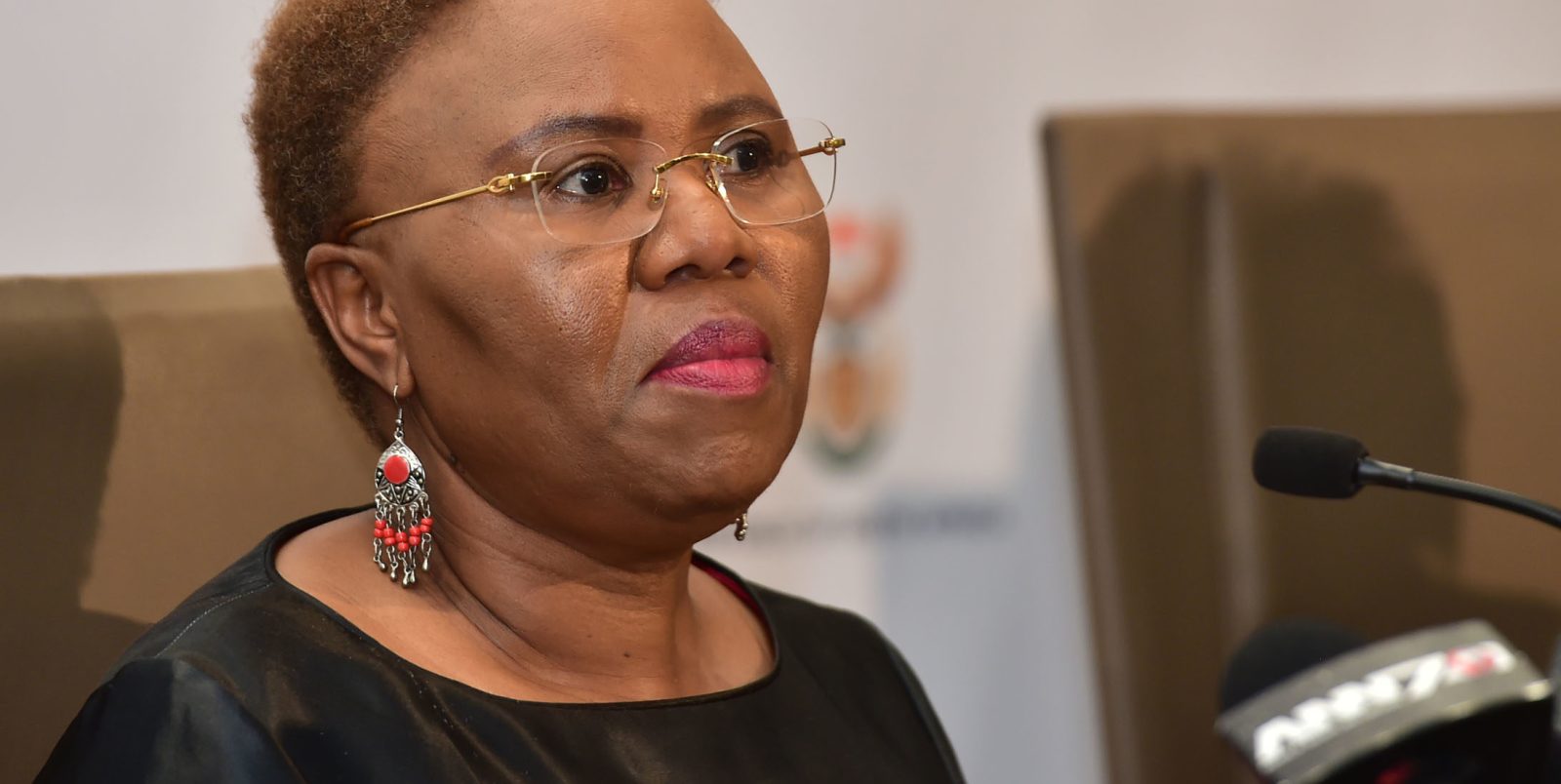 Cases of gender-based violence are continuing to increase, the Minister of Social Development Lindiwe Zulu said in a briefing on Wednesday. She also admitted that the country’s child support grant was below the breadline, but said government does not have the money to provide an increase.

The Minister of Social Development has admitted that the number of gender-based violence cases in the country are increasing as lockdown continues. She said government was not moving fast enough to get women out of abusive situations.

“We have seen a rise in the number of Gender-based violence (GBV) incidents and we have strengthened the capacity of our GBV Command Centre by adding additional qualified social workers to attend to gender-based and family violence cases that are happening during this period. This is one of the biggest problems we are facing. My call to our communities is that we must still report GBV.

“This morning I looked with horror at a picture of a young woman who was burnt by her boyfriend. The plea and call that we are making is this: Lockdown does not allow you to be abusive.

“Working with civil society, we have developed referral pathways during the lockdown to faster assist victims of GBV to link up with relevant authorities at this time, which is also linked to the Gender-Based [Violence] Command Centre.

“We have to upscale the support that we are giving. We have to find other mechanisms to enable people to leave the house and go to the police.”

Clearing up the confusion regarding child grants, she confirmed that caregivers whose children receive child grants will receive R500 a month between June and October. She emphasised that government could not afford increasing each child support grant by R500 a month for six months. She said there would be a once-off increase in the child support grant of R400, due in May.

“I do want to say here: The child support grant is below the poverty line. We don’t want a short-term solution. We need to have a conversation as a country to look at other ways to ensure that in future that child care grants are increased.

“[M]any organisations are arguing that we have short-changed the children. While I acknowledge that all the proposals were sound and well-motivated, we were unfortunately not able to provide the necessary funding to accommodate every one of the proposals. She said that it would have cost government R38-billion to increase the child support grant for six months.

Zulu said they were in discussion with the Minister of Education, Angie Motshekga, about ways to fill the gap left when the school nutrition project was suspended due to the closure of schools.

She said an explicit reason for the large relief package announced by President Cyril Rampahosa last week was that the National Command Council (NCC) on Covid-19 had an “explicit interest to cushion poor and vulnerable South Africans from the impact of the pandemic and its aftershocks”.

Ramaphosa announced the relief package, including financial and social relief, saying that it will be used to mitigate against the impact of the outbreak of coronavirus infections in the country and the subsequent hard lockdown that brought almost all economic activity to a standstill as only essential workers were allowed to work. The hard lockdown had all but devastated the country’s informal economy.

“We are going through a difficult time and many in our country are anxious about where their next meal will come from; theirs and their loved ones’ well-being and future prospects; and their possible exposure to the virus,” Zulu said.

She said the national departments allocated a sum of R20-million to efforts by the Solidarity Fund to distribute emergency food parcels. The Solidarity Fund has provided R23-million. More than 58,000 households had received parcels and this would benefit 250,000 people.

“We are looking at scaling up this programme,” Zulu said. “No South African must go hungry.”

All current beneficiaries of community nutrition centres qualify, those who receive home-based care and those who are part of government lunch clubs. “These also include households in need of food assistance which are not supported through the Social Relief of Distress Fund (SRD) and any other feeding programmes,” Zulu said.

She said they were in talks about setting up a food voucher system.

“I echo President Ramaphosa’s sentiments in condemning with the strongest possible terms the politicisation of government’s nutrition relief resources that should benefit the poor and vulnerable. South Africans should not be divided along political, or any lines for that matter, when they need to be united. Equally strong is government’s stern warning to those who steal and profit from nutrition relief packages that are destined for the poor,” Zulu said.

She said that there were presently 163 shelters for the homeless countrywide accommodating about 14,000 people.

“This number fluctuates as some are running away, with some coming back and some not. Within these shelters, we are providing personal protective equipment (PPEs), dignity packs, food, sanitisers, sleeping mattresses and blankets. Additionally, we are providing substance abuse and psycho-social support services,” she added.

“The regulations currently do not cover for the movement of children who have visited their family members and now need to return to their parents during the current lockdown. We have made proposals to this end to amend such regulations to allow those children to return back to their parents. These will also be gazetted soon.

She said “they were looking at” returning all social workers to local offices to resume duties if that office can provide adequate personal protective equipment in line with health protocols.

Zulu confirmed that all other existing social grants will be increased by R250 a month from May to October 2020. From May, she said, the payment of grants will be staggered over a number of days to ensure that personal distancing guidelines can be followed. Grants for older people and people with disabilities will be available from 4 May. All other beneficiaries will be able to collect their grants only from 6 May.

Zulu said that the R350 special Covid-19 relief grant will be paid from May to October.

“The new special Covid-19 SRD grant requires a rather more complex approach, as the beneficiaries are not on the Sassa database or other government grant support programmes. It was therefore necessary to introduce new systems and new qualification criteria, and amend some regulations,” she said.

To apply for the grant, applicants will need an identity number or Home Affairs permit, banking details, contact details and proof of residential address.

She said people may apply by sending a WhatsApp message or email, and they were finalising a way for SMSes, self-help desks and online applications to be used.

“For people with no access to technology, volunteers will be trained to assist applicants who cannot use technology and will be provided with gadgets to capture details on behalf of applicants,” Zulu said.

Bank accounts and cash sending measures will be used to transfer the grant. She said there would be no back pay.

“Applicants who apply in June will receive their grants from June.

“The system will go live immediately when the regulations are published and we envisage to start making payments by 15 May 2020. Those who have applied during the trial run will be contacted to provide further information,” Zulu said. DM/MC