After the virus: What are Africa’s chances of recovery? 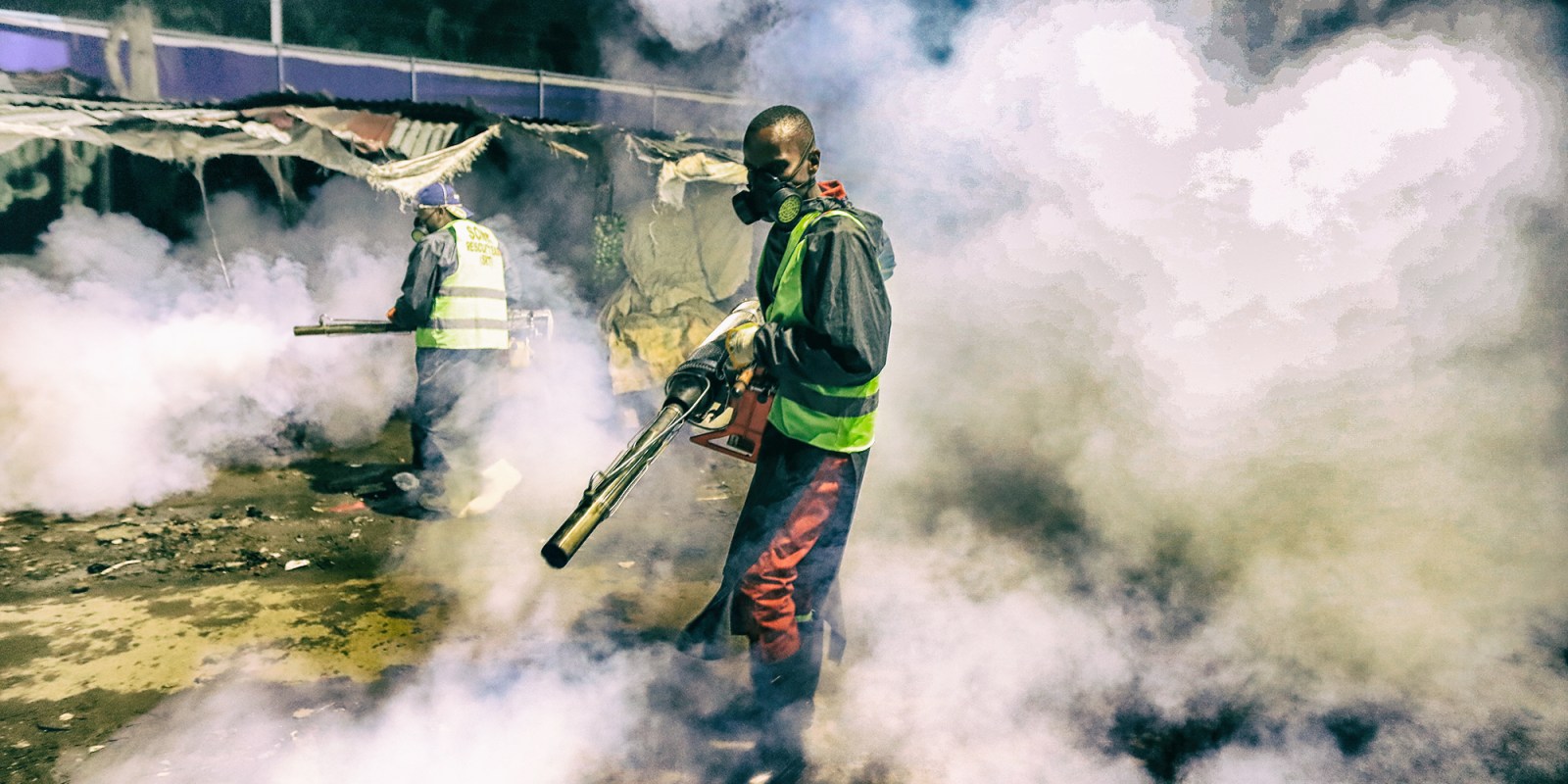 Members of the Sonko Rescue Team, an NGO founded by Nairobi Governor Mike Sonko, use smoke machines to spray streets and surfaces as they conduct a fumigation exercise during curfew at a local city market and its main streets in order to fight the spread of the COVID-19 coronavirus pandemic in Nairobi, Kenya, 15 April 2020. (Photo: EPA-EFE/Daniel Irungu)

Today’s trillion-dollar question is: What will the post-Covid-19 world look like? Will the world indeed deglobalise, will supply chains shorten and what will all of this mean for Africa’s many already-fragile economies?

Over the last few weeks, there has been a multitude of predictions on the size and scope of the economic upset caused by Covid-19. The International Monetary Fund (IMF) predicts the global economy will contract by 3% in 2020, making the “great lockdown the worst recession since the Great Depression, and far worse than the Global Financial Crisis”.

McKinsey, for example, finds that in the absence of significant fiscal stimulus, Africa will experience a three to eight percentage point cut to GDP growth, up to a $200-billion decline, notwithstanding the effects of currency devaluations, inflationary pressure, or declining credit ratings, all of which could further worsen the economic outlook.

Economists are usually more cautious to predict good things. However, a global reset does not have to be a bad thing for Africa if it can use this crisis as an opportunity for much-needed economic reform, and in so doing reposition itself to take advantage of a changed global order.

The first step, as pointed out, is thus to face up to the crisis and turn it around. As with South Africa, even before Covid-19, the rest of the African continent faced tremendous challenges, on the cusp of seismic demographic change; not just numbers, but also in distribution, as the world’s fastest urbanising region. Over half of the population of sub-Saharan Africa is today under 25, half of whom are unemployed, accounting for 60% of all the continent’s jobless. This presents a politically explosive scenario.

Finding a way out of this situation was never going to be easy, and Covid-19 has just made it much harder. Before the crisis, the IMF, for instance, estimated that Africa needed to create nearly 20 million high-value jobs each year just to keep up with the number of young people coming into the African job market.

Enabling an economic recovery while dealing with a backlog of problems like unemployment and poverty will depend primarily on Africa’s ability to access finance – both investment and loans.

However, many countries are already at a dangerously high level of indebtedness. In 2019, the majority of sub-Saharan African countries (38 of 47) registered a fiscal deficit. The World Bank estimates that the region would need an additional stimulus of $100-billion “including an estimated $44-billion waiver for interest payments in 2020”.

The IMF has, for instance, announced $1-trillion in financial firepower to help the global response to Covid-19, $100-billion of which is earmarked for low-income and emerging countries. Ten-year interest-free loans have already been announced for lower-income countries, including Rwanda, Senegal and Madagascar. The World Bank has also announced that $160-billion will be available over the next 15 months. The African Development Bank (AfDB) is also providing substantial capital, including via a $3-billion social bond.

There are a number of possible threats to this funding scenario. The prospects of global recovery – and the normalisation of globalisation – depends on a range of political factors, centred on the US-China relationship. The possibility of a globalisation reset could be increased by a number of events: The use of an anti-China platform by President Donald Trump during the 2020 election (a near certainty) or a more aggressive response by China, including over Taiwan, in the South China Sea, or in Hong Kong. There is a global, strategic aspect as relations take on a Cold War tone and temperature.

No matter the schadenfreude of some over the globalisation reset, there is a clear connection between the health of global capital flows, and the ability of African countries to fund their way out of this crisis.

What this means, simply, is those who can best access funds, and put those funds to good use, will be in the strongest position to benefit from the new world order, which will include some potential upsides for African countries.

First, they could position themselves to benefit from the moderation of “one country risk” (especially to China) in global supply chains and practice diversification. As Joerg Wuttke, president of the EU Chamber of Commerce in China recently put it, “single source is out and diversification is in”.

Despite increased continental trade openness overall, the level of integration in global value chains in Africa is one-third lower than other developing regions. Changing this requires diversification of investment types away from traditional concentration in extractive sectors to more light manufacturing and services, which can create opportunities for value addition.

A drive for diversification is all the more imperative in Africa’s commodity-producing states post-Covid-19 as they seek to reduce export vulnerabilities and increase job opportunities.

Africa’s relative performers might also encourage greater aid flows through increased policy differentiation, in particular from the United States, already the largest donor to Africa, contributing $11.2-billion of $53-billion annually (with the European Union providing the second-largest volume of some $7-billion), to ramp up economic growth and job creation.

China has already made headway with its belt and road infrastructure initiative across developing and into developed markets. The pandemic offers it the opportunity to present itself as a humanitarian ally, and Africa could also leverage its position including the treatment of its nationals in China, to improve terms of aid and trade. There have already been calls for Beijing to scrap the $140-billion in debt that African countries have taken out with China since 2000 as partial compensation to African countries for the impact of Covid-19.

Secondly, there may be another unexpected upside for Africa from the crisis. Younger populations might well come out of Covid-19 better than older ones. The global south should, given the right conditions, be somewhere to invest. But much will depend on how Africa survives the crisis, the extent to which it is able to de-risk investments and how it positions itself to profit from this new order.

A global reset does not have to be a bad thing for Africa if it learns to own its problems and be their solution. The imperative for African leadership resolve, national resilience and a drive for competitiveness cannot be understated. But it is a situation of move quickly or be damned. DM

The writers are with the Brenthurst Foundation.

This article is an excerpt of a more detailed Brenthurst Foundation Discussion Paper.