US will more than make up shortfall of suspended WHO funding, says Pompeo 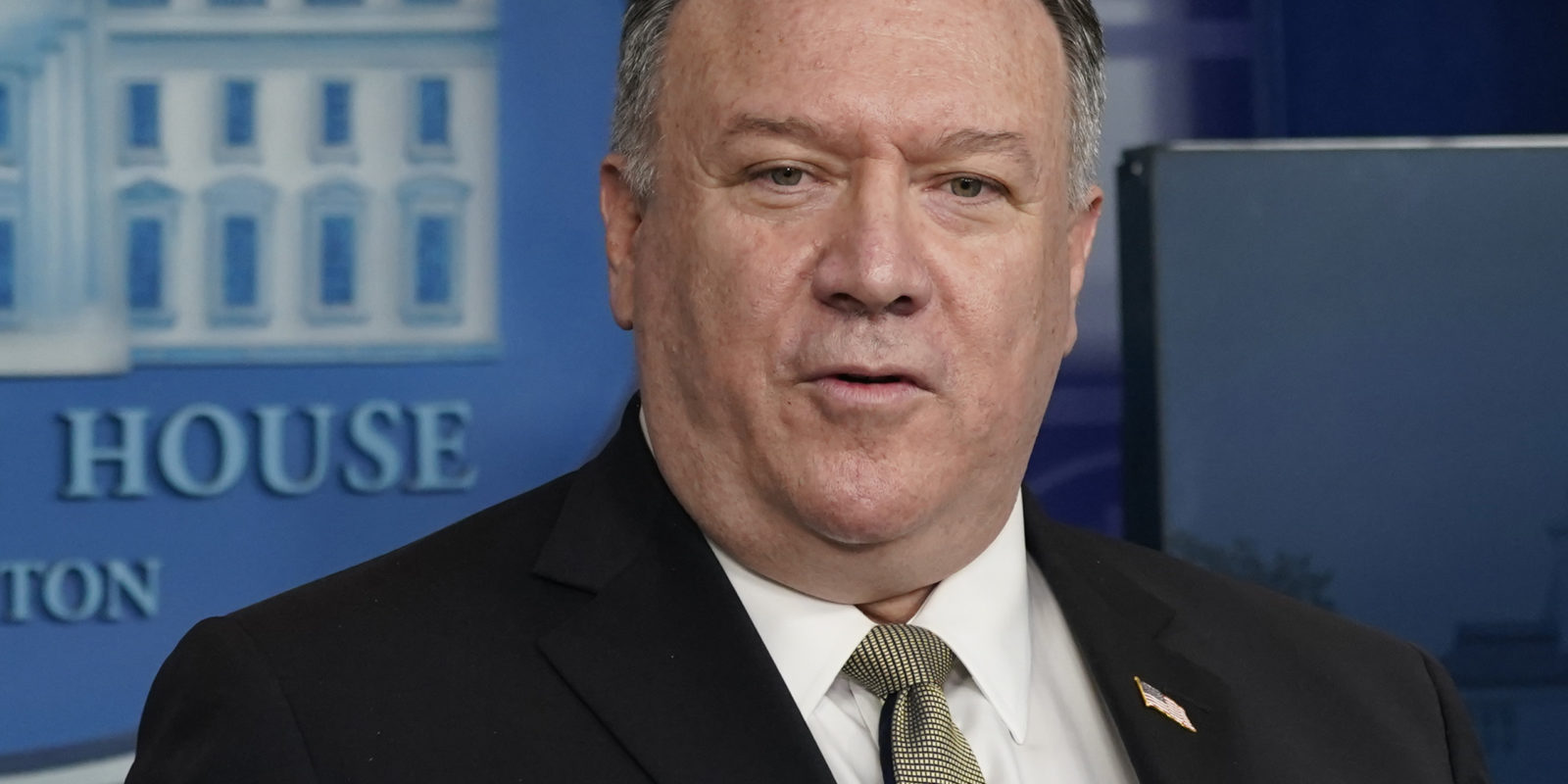 US Secretary of State Mike Pompeo participates in a news briefing with members of the Coronavirus Task Force at the White House, in Washington, DC, USA, 08 April 2020. (Photo: EPA-EFE/Chris Kleponis / POOL)

But the US secretary of state was more hesitant in his response to calls for a complete cancellation of the debt of poorer countries.

US Secretary of State Mike Pompeo has said the US will more than compensate for cutting off funding to the World Health Organisation (WHO), by stepping up its own support to the global fight against the coronavirus.

Pompeo also dismissed perceptions that the US is losing the public relations war in Africa by withdrawing financial support from the WHO – and offering unscientific Covid-19 remedies through President Trump – while China, Cuba and the WHO itself ramp up concrete assistance to the continent.

Pompeo was also adamant that the US would fulfil its promise to provide ventilators and other vital equipment to African and other countries – despite some lingering uncertainty about whether the US itself still has a shortage of such life-saving gear.

Pompeo was addressing a telephone briefing of African journalists on Monday 27 April. One said that most Africans were talking about Cuban doctors, the WHO and China helping Africa fight Covid-19.

“When it comes to the US they’re talking about your administration’s withdrawal of financial support from the WHO and they’re talking frankly about President Trump’s comments about disinfectants, chloroquine and other unproven remedies,” the journalist said. “Are you concerned about reputational damage?”

Later on Monday the Chinese philanthropist Jack Ma delivered a third consignment of medical equipment to fight the pandemic in Africa, including 500,000 swabs and test kits and 300 ventilators. Earlier, a Cuban medical brigade of more than 200 health professionals had touched down at Pretoria’s Waterkloof air base to help South Africa fight the virus.

Pompeo replied he was always concerned when people had a misunderstanding of the facts because disinformation was being propagated.

“We’ve contributed $500-plus-million to the WHO – that is 10 times what China has ever contributed.

“And President Trump has been very clear. We want to make sure that money gets to the right places. We’re not reducing the amount of money we’re providing for global health assistance. Indeed, further forward, I’m confident we will actually increase that number.

“But we need to make sure it’s part of a multilateral institution that actually functions and actually delivers good outcomes for the people in some of the poorest countries in the world and in Africa.”

Trump suspended US financial contributions to the WHO pending a 60- to 90-day review because, he said, of its role in helping China cover up the outbreak of the coronavirus pandemic in Wuhan late last year.

Pompeo said when a multilateral institution like the WHO  failed in its primary mission, to ensure that when it had accurate timely information it made good decisions to stop the spread of the virus, Africa and other countries suffering the consequences should hold it responsible.

Pompeo said US support for Africa’s health was “unrivalled.” It had invested about $60-billion in public health in Africa over just the past two decades, saving many lives, including more than 17 million through its Pepfar initiative to fight AIDS. It had also trained 265,000 healthcare workers.

And it had launched a “massive effort” to help Africa fight Covid-19, including committing more than $170-million as part of the more than $775-million it had pledged to curb the pandemic worldwide.

Apart from finances, the US was also repurposing field hospitals, tents and ambulances from international peacekeeping missions to fight Covid-19 in Ghana, Senegal, Uganda, Sierra Leone, and Mauritania. In Ethiopia it had trained more than 500 Covid-19 rapid response workers.

In Nigeria, even in states ravaged by Boko Haram and ISIS West Africa, the US had trained hundreds of volunteers to slow the spread of the virus. And the US was still playing a big part in multilateral efforts with epidemiologists and other experts working with many African countries and with the African Union.

US NGOs, charities and businesses were also continuing “their renowned American generosity” such as Catholic Relief Services providing emergency assistance to the most vulnerable in South Sudan.

Pompeo said the US had also played a central role in urging other G20 and G7 countries to agree to suspend the debt repayments of lower-income African countries as a bridge to get them through the pandemic.

But Pompeo was more hesitant in his response to calls, including from Senegalese President Macky Sall, for a complete cancellation of the debt of poorer countries. The US was “working to make sure that we evaluate the situation properly and we respond… in a responsible way,” he said.

He added that the “Chinese Communist Party” had also imposed “an enormous amount” of debt on African countries, some of it on “incredibly onerous terms,” that should also be relieved.

Pompeo said the US was undertaking a “massive effort” to ensure that other countries received essential equipment to fight the pandemic, referring to Trump’s recent statements promising ventilators, particularly, to several countries, including Ethiopia.

But he was not completely clear about when all the equipment would be provided.

Asked if the US could hold back on exports of ventilators and respirators until its own needs had been met, he answered, “Goodness gracious, no,” adding that “we are now beginning to export significant numbers of ventilators. As our companies ramp up, the number will grow increasingly. We’re going to create a supply chain for the world so that this equipment is available for all citizens across the world. I’m wholly confident we will achieve that.”

But to another question about supplying medical equipment to foreign countries, he answered, “We will be able to provide enormous assistance to countries throughout the region as well… we believe, over time as the virus begins to become less accretive here in the US… I’m confident we will do that.”

The second response suggested that the equipment would be exported only when it was no longer needed in the US – although Pompeo might have been talking about different kinds of equipment in each case.

Pompeo said there was a global shortage not only of ventilators but of a broad range of items needed to fight the pandemic.

“And the United States is engaged in an economic effort that is unrivalled anywhere in the world to meet that demand. As our supply chain begins to kick in, we’re going to do the right thing for the citizens of our country for sure.

“But we’ll do the right thing for citizens right across the world, and the president over the last number of days has made a number of commitments to countries around the world. And specifically, I know that’s been done at other levels as well. We’ll absolutely make good on those commitments.”

US media has reported that the US government intends to pay for the equipment sent to Africa which has shortages of most if not all vital equipment. Pompeo did not address that point. DM