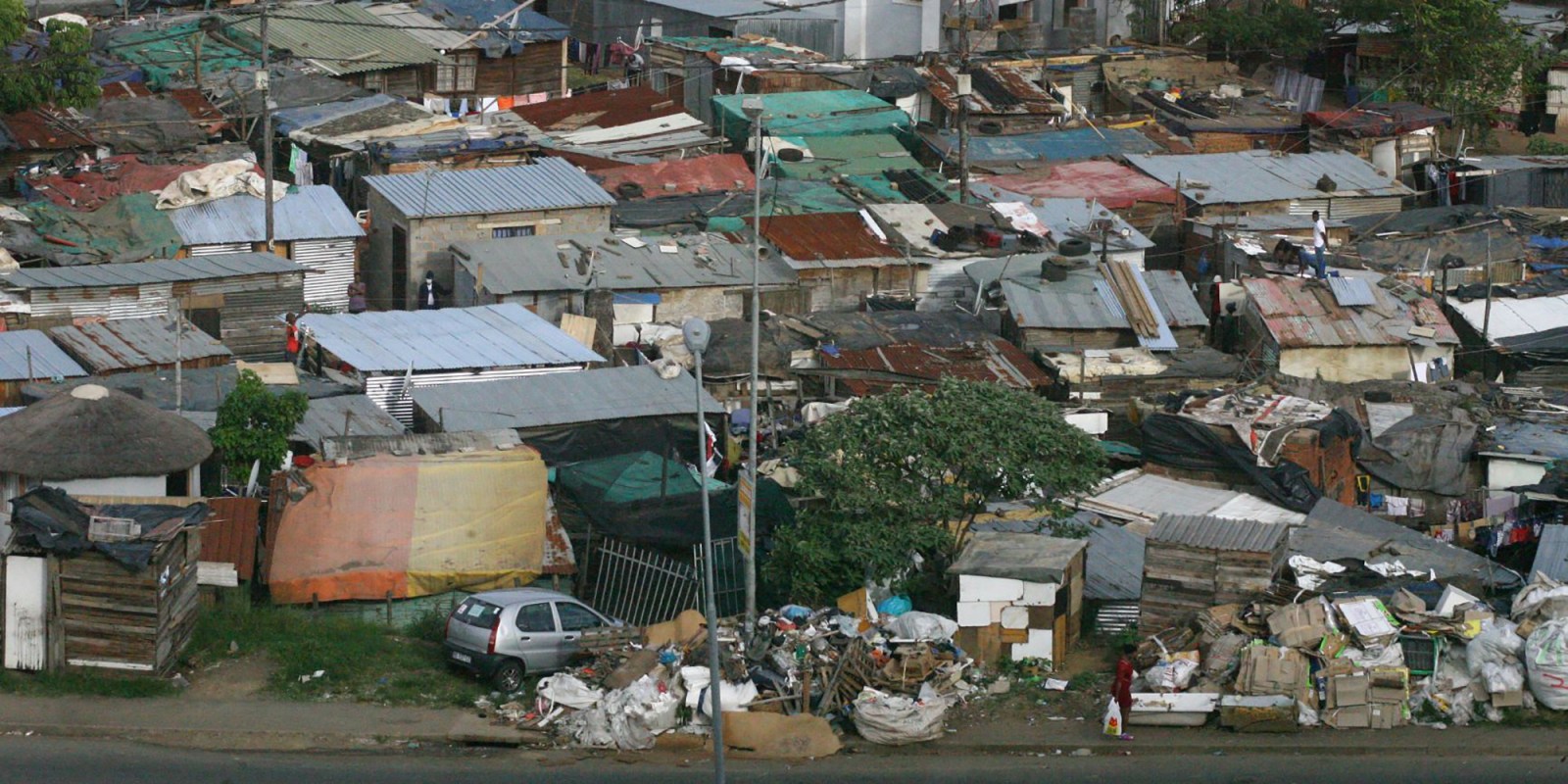 Shack settlements in Durban's Cato Manor are a combination of established and new structures. Violent clashes between shack dwellers and police are common in the area during evictions. (Photo: Jonathan Erasmus)

Shack settlements in Durban’s Cato Manor are a combination of established and new structures. Lockdown has not stopped evictions, despite Covid-19 regulations prohibiting them.

Impoverished, suspicious of and frustrated with municipal authorities, shack dwellers countrywide have been at the forefront of evictions from their meagre makeshift homes throughout South Africa’s Covid-19 lockdown.

While regulations prohibit the eviction of anyone during this period, the devil lies in the proverbial detail: those perceived as invading land and building new illegal structures on state property are fair game.

The answer that must be determined before dismantling is if the dwelling, usually a combination of corrugated iron, discarded wood board and other cheap barrier materials, is considered occupied or not. If it is not occupied, there is no need for a court order.

But for legal teams working with shack dwellers, being able to answer this question in a state of lockdown has become difficult, if not near-impossible.

In contrast, metropolitan councils have in-house legal counsel and a monopoly on movement.

This has drastically skewed the already prevalent power imbalance between authorities and the vulnerable.

The present lockdown regulations passed on 31 March require attorneys to apply to the provincial director of their respective Legal Practice Council for permits, which can only be issued for an urgent matter that is already enrolled for hearing.

This provides a problem for new, urgent matters in the high courts, such as obtaining an urgent interdict. It also affects the lower courts where first appearances occur.

In fact, so critical is this point that the Cape Town Attorneys Association may end up taking Minister of Justice Ronald Lamola to court if undertakings made by Lamola to the association to review and amend the regulations by 10am on Tuesday morning (today) are not met.

In eThekwini, Cape Town and Johannesburg, various shack-dweller movements have dragged their metros to court thanks to pro bono legal services despite these odds, claiming their occupied homes were demolished without a court order. They have further maintained that the country’s lockdown regulations prohibit any form of eviction.

The common denominator used by municipalities in their defence has been that the structures being demolished have been “incomplete” and/or “unoccupied”, and that authorities were within the ambit of the law to tear them down.

In Cape Town, Khayelitsha shack dwellers were granted interim relief on 19 April by a high court after several of their structures were demolished by the City. The court ordered the City to return building materials confiscated from the shack dwellers.

The City said that despite the interim relief, its anti-land invasion efforts “did not act contrary to the lockdown regulations or the national law”.

In the case of eThekwini Metro, the City and shack dwellers’ movement Abahlali baseMjondolo have been to court twice — each obtaining a victory.

On 7 April, the City convinced the Durban High Court that the removal of structures near Shallcross and Cato Manor, known as the Ekuphumeleleni and Azania settlements, was legal.

But on 24 April, Abahlali obtained an interdict preventing further demolitions at another informal settlement in Cato Manor known as eKhenana.

eThekwini mayor Mxolisi Kaunda at a Friday press briefing sounded “a warning to those who continue to take advantage of the lockdown by invading land and erecting illegal structures”.

Two days later, KZN Premier Sihle Zikalala told Daily Maverick at a press briefing that what the City was doing “was not evictions, but it was dismantling of newly built shacks”.

In Johannesburg, about 80 structures in Lawley, south of the city, deemed illegal, were torn down. Among those arrested for the invasion was a South African National Defence Force soldier from 21 Battalion.

Johannesburg mayor Geoffery Makhubo pushed the notion that the shacks were “unoccupied”. He was supported by the Gauteng Co-operative Governance MEC Lebogang Maile, who said last week that land invasions in the south of the city were “out of control”.

History has shown that if municipalities allow structures to be erected and occupied on invaded land, it could take up to nine months or longer before the occupants are removed.

Motileni said the LRC had filed papers against the evictions at midnight on Sunday, 16 April.

Before filing, Motileni and her colleagues had to consult with their clients over the phone “while we could hear the demolitions taking place in the background”.

Due to the urgency of the matter, Motileni said, they were unable to obtain permits from the Legal Practice Council, and instead took their attorney admission certificates, on the advice of counsel, when they drove to see their clients.

“On the N2 we drove into a roadblock and were held for an unreasonably long time of 45 minutes. The officer attending to us would not let us through, and when he found out why we were going to Khayelitsha, he said he could not let us through as we would stop his colleagues from fulfilling their mandate. It was only when a senior officer arrived and heard us, that we were let through”.

Although Motileni and her colleagues managed to commission some papers at Khayelitsha’s Harare Police Station on Monday, by Tuesday, notices appeared at police stations stating no commissioning would be done.

“We eventually managed to get the commissioning done via a WhatsApp video call by an advocate”.

She said the victory against the City was due to collaboration with community groups such as Ndifuna Ukwazi and the Social Justice Coalition.

“Ndifuna Ukwazi has activists on the ground. On 10 April they assisted us in putting spreadsheets together as to who was affected and collecting details such as how many children were in the households”.

She said it was clear that the lockdown disempowered the most vulnerable.

“How is it that it is only after lockdown happens that the evictions took place? How do they think those affected would get legal assistance when most offices are closed? This is an abuse of power”.

The shack dwellers the LRC was representing had been on site since 2019, she said.

The Abahlali group in Durban was being represented by Nomzamo Zondo of the Socio-economic Rights Institute (SERI), who told Daily Maverick the lockdown had made it “near to impossible” to service her client.

“We have been unable to get on the ground. We had to get information over the phone, and we struggled to get evidence. It took a day just to print our correspondence and it took 24 hours to get our documents commissioned,” said Zondo.

An additional problem, she said, was serving papers on the municipality.

“Our emails kept on being bounced out. When (Abahlali leader and president) S’bu Zikode went to get the documents — such as affidavits — commissioned, the police told him they were not doing commissions [as their focus was on Covid-19]. I too went to get documents stamped and only managed to get it done because I knew a person of a higher rank that I could call.”

“Much of what we did was over the phone and WhatsApp messages”.

The lockdown being eased on 1 May would provide some respite, said Zondo, but until there was “complete freedom of movement”, access to justice would remain “near impossible” for poor communities.

According to an affidavit filed with the Cape Town High Court last week by the Cape Town Attorneys Association chairperson, Clive Hendricks, the restrictions on movement placed on legal practitioners was compounded when dealing with the most vulnerable, who were without electronic forms of communication.

“It is simply impossible to render legal services to them, no matter how urgent their need may be, because one cannot obtain a permit until the matter is actually enrolled for hearing,” said Hendricks.

He said that in certain instances, often the most disadvantaged and vulnerable had been the victims of “unlawful and excessive enforcement of the lockdown by authorities”.

“In practice, they have no access to the law and cannot exercise their rights. They are helpless.” DM