AFTER THE VIRUS: OP-ED

Turning crisis into opportunity: Choices for a better South African future after Covid-19 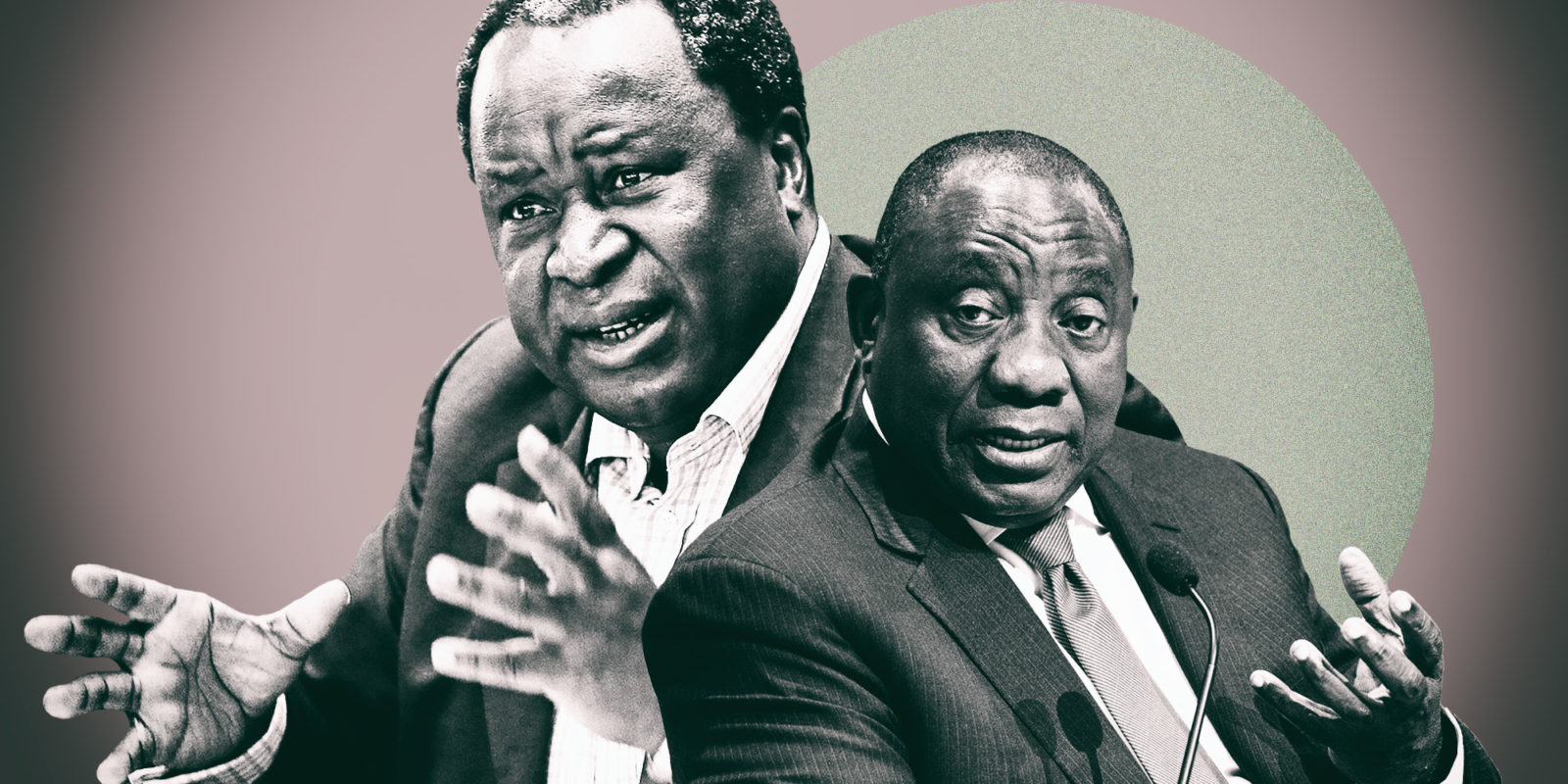 How should South Africa approach the array of crises it faces with a view to emerging in a stronger position to deal with its multiplying economic challenges?

On Tuesday 21 April, President Cyril Ramaphosa had this to say about South Africa’s fight against the Covid-19 pandemic:

We are resolved not merely to return our economy to where it was before the coronavirus,

but to forge a new economy in a new global reality…. Building on the cooperation that is being forged among all social partners during this crisis,

we will accelerate the structural reforms [emphasis added] required to reduce the cost of doing business, to promote localisation and industrialisation, to overhaul state-owned enterprises and to strengthen the informal sector.

The president was announcing the country’s largest-ever emergency spending plan to help South Africans cope with Covid-19 and its effects.

In our most recent discussion paper, we unravel South Africa’s realities and the imperative for much-needed reforms around building a capable, efficient, corruption-free state. To achieve the required efficiencies, the Presidency will have to lead an all-of-government approach.

South Africa’s economy was already in trouble pre-Covid-19. Its 2020 economic growth was forecast at 0.8%, on the back of 0.7% growth in 2019. Under- and unemployment was effectively at 40%, and over 50% of young South Africans were out of work. Business confidence at the start of 2020 was at its lowest level in two decades.

Many international financial institutions are offering finance on good terms to fight the pandemic. However, while it might be low-interest debt, it is still debt. South Africa will struggle to service it and its other obligations unless the economy is kicked into life to bolster declining government revenue.

The International Monetary Fund (IMF) predicts that South Africa’s economy will decline by as much as -5.8% during 2020, and rebound, all going to expectations, to 4% in 2021. This assumes that the government’s measures to manage the crisis and keep the economy ticking over are effective, and that the delivery of additional resources hits the intended mark. If not, and if revenue collapses along with GDP as spending ramps up, rather than the predicted V-recovery, South Africa might instead be looking at a deficit to GDP of as high as 20%.

The effect will be compounded by the recurrent nature of the increased grants and other pay-outs as announced by the President, which the government would find difficult to turn off in the midst of a recession. Fundamentally, without the right sets of policy measures to reset the economy, South Africa could simply create a big increase in public debt with a limited domestic surplus.

The Covid-19 crisis might be a distraction, but it would be a dangerous illusion to assume that it sweeps away the serious problems that existed prior to the pandemic. What is needed is a strategy that faces South Africa’s problems head-on and takes the country out of the low-growth, high-unemployment, high-crime, socially discordant dystopia that existed prior to Covid-19, and ensures the South African economy not only recovers, but is able to prosper.

Taking our cue from Ramaphosa’s observation about the imperative to forge a new economy, since 1994, South Africa’s share of global per capita GDP has fallen from 78% in 2008 to 68%, just as government consumption as a share of GDP has risen inexorably by 14% over the last ten years – growing at a rate equal to or greater than GDP growth for eight out of the last 10 years.

This, made worse by falling global ratings, an ever-ratcheting premium on borrowing, is a result of a failure of growth; and that is a result of a clear failure in governance, profligate spending, State Capture, looting and corruption which have particularly affected South Africa’s SOEs, and an inability to promote policies that could encourage investment and increase productivity.

That Covid-19 will push the economy firmly into recession is certain. It’s only the extent of the recession, which is arguable, for the moment most likely in the 5-7% margins, as per the IMF, in the process stressing the government’s revenue streams and thus ability to respond. This translates, according to some economists, to the loss of as many as 1.6 million formal sector jobs by the end of the second quarter following the extension of the lockdown.

The lockdown has highlighted differences in the vulnerability and resilience of poorer South African communities, and the opportunity for continued near-normality. While white-collar workers in the financial services sector have for instance been able to continue their jobs almost unhindered working from home, many low-wage workers and those in the SMME-sector have either lost their incomes, been forced to take leave, or face job cuts. The pandemic has also exposed the vulnerability of the small business sector, which depends on short-term cash-flows to fund operating expenses.

More importantly, the cost of fudging the choice between the state and the private sector has suddenly increased with Covid-19. The epidemic has offered the opportunity for the private sector to become a partner in economic development, as epitomised by the Solidarity Fund. How this relationship develops and whether both parties can see the growth opportunities present offers exciting possibilities.

How should South Africa approach the array of crises it faces with a view to emerging in a stronger position to deal with its multiplying economic challenges?

No silver bullets exist, however, and no easy, simplistic solutions exist either; rather the reform path, as ever, lies in between the radical offers, involving a series of difficult political trade-offs and tough resource choices.

These are the key choices that have to be made:

Muddle along or make the tough macro-economic choices:

It is vitally important that strong signals are sent to domestic and foreign audiences that the government understands the magnitude of the crisis it faces, and is taking strong, well-targeted steps to reverse the dire economic outlook and reduce risks to the sustainability of the balance sheet. A “credible medium-term fiscal adjustment strategy” is needed to prevent the government losing all credibility with the financial markets, leading, eventually to financial and fiscal collapse, especially in light of Moody’s investment status downgrade.

Rhetoric or action on small businesses:

Government has publicly supported small business growth, has a ministry dedicated to small enterprises and repeatedly says that small businesses are the engine of employment. But the reality does not match the rhetoric. Immediate actions to be taken should include: the exemption of small businesses from collective bargaining agreements driven by large trade unions and corporations; the swift implementation of subsidy schemes and incentives for start-ups, including tax holidays and labour-law exemption.

Bailouts or dividends from state-owned enterprises:

Plans need to be made with the 700-odd SOEs – whether to sell off, merge or continue operations. There is simply no new money available to bail out SOEs such as Eskom, SA Airways and Transnet, which bear a large responsibility for the depth of the hole the economy is in. The portfolio of SOEs must be urgently reviewed and non-core cost centres must be closed or sold off – if there are private buyers.

A moribund state or one that delivers growth:

The state is not fit-for-purpose and has become a supplier of patronage opportunities at the cost of efficiency and function. The first priority must be a radical overhaul of health provision systems, with a view to improving access by all to intensive care facilities and a boost to the country’s excellent laboratories, for instance. The need for a capable state is not, at its core, about spending more, but about spending better. Beyond this, the state needs to become a partner in developing private sector growth with an emphasis on job creation.

Open for business or cadres only:

South Africa must become an “open-for-business” economy, where it is easy to invest and achieve a return that competes with other investment destinations. This calls for a sea-change in how the government regulates the economy from an approach which seeks to extract rents for politically connected constituencies to one where obstacles to investment are actively minimised in partnership with the private sector. A permanent investment agency – privately-run but backed by government needs to be established to facilitate foreign capital inflows.

The costs and benefits of reform

South Africa’s choice is a simple one: Sort out its policy and financial mess on its own or erode the government’s ability to deliver social welfare, services and stability, and lose policy sovereignty.

The “failure” option, which has been pursued over the last two decades, has been to say the right things while ignoring the financial implications of insatiable borrowing and rampant spending to keep an oversized state and its enterprises afloat. Large and powerful constituencies hold on to the belief that the state ought to be the primary driver in the economy and are deeply suspicious of the private sector. As a result, the state and SOEs have become patronage dispensing machines that absorb labour without improving productivity.

The “success” option is to make the state and SOEs meritocracies, the kind that attract and reward highly skilled managers and workers who are able to more efficiently and effectively deliver on the state’s mandate. Such a state would develop policy based primarily on its impact on economic growth and job creation, and would view the private sector as a vital partner to advance the country.

The decision that must be taken now is one that will set this country’s trajectory for decades to come. Structural reforms that contain spending, uproot cronyism and tailor spending to the financial realities will produce a more effective, professional state that delivers – a sound financial platform to allocate resources to capital projects and investment, growth and jobs.

But there is no escape from the harsh realities that face Ramaphosa’s government. If anything, the crisis has shown exactly how stressed the contemporary circumstances of South Africa’s economy are. It does, however, also provide an opportunity to make far-reaching changes. To turn this crisis into an opportunity, South Africa’s leadership will have to act with decisiveness and implement much-needed economic policy reforms which put jobs and growth before ideology and vested interests.

This better future, one of progressive capitalism, is not about less state or more state, but about a capable, efficient, corruption-free state. DM

This article is an excerpt of a more detailed Brenthurst Foundation Discussion Paper. 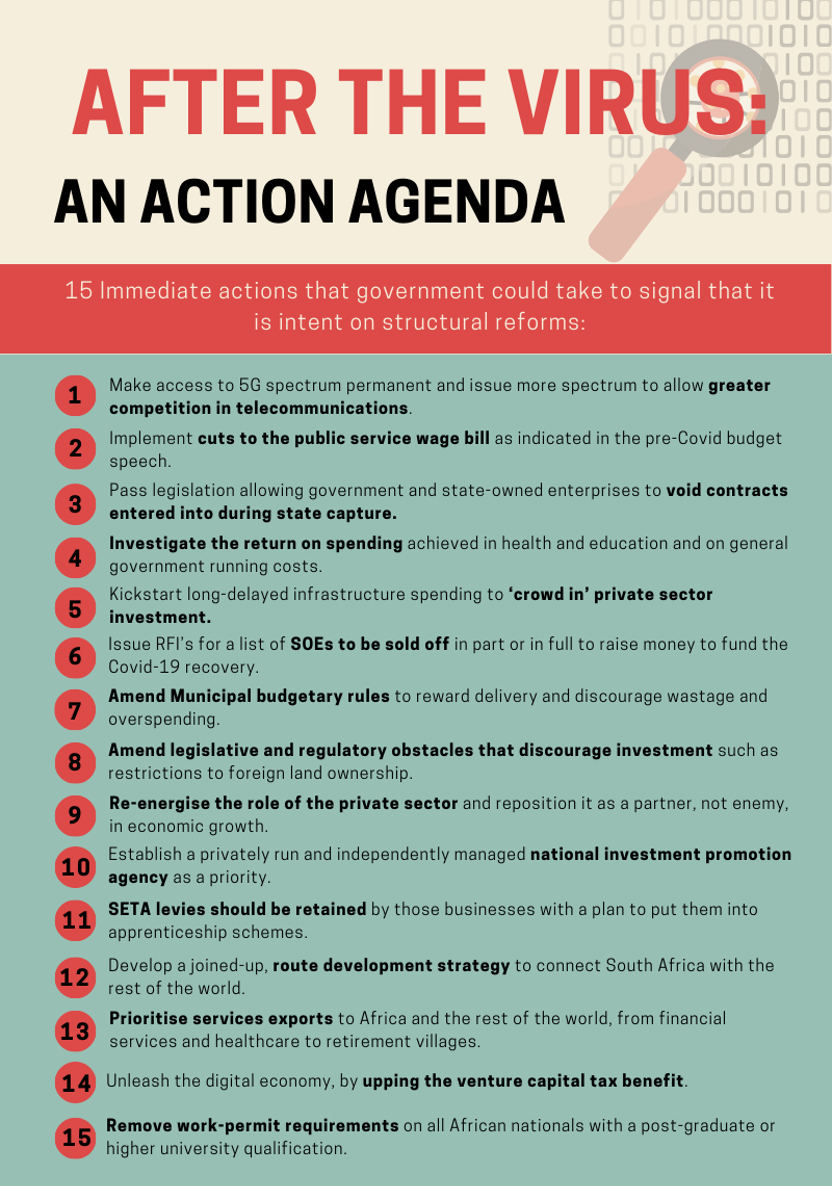