Sparks, flames and blazes: Epidemiological and social firefighting for Covid-19 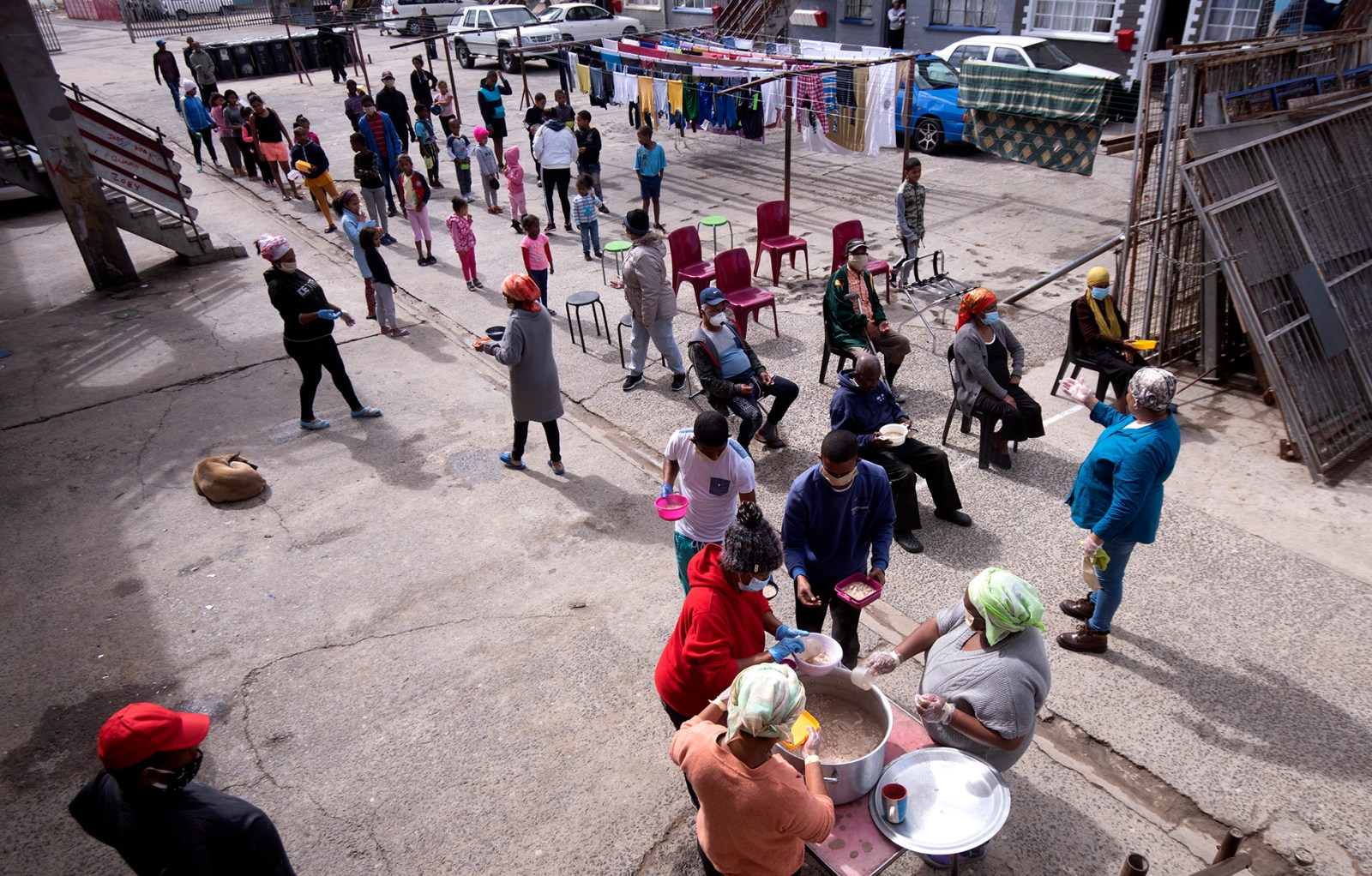 CAPE TOWN, SOUTH AFRICA - APRIL 16: Anwar de Vries and friends from Ashley Court feed the elderly and children in Lavender Hill on April 16, 2020 in Cape Town, South Africa. Hunger is a growing concern in Lavender Hill during the lockdown hence Anwar de Vries and friends have taken it upon themselves to feed the hungry. They rely on donations from friends and family so they can make one big pot of food a day. (Photo: Gallo Images/Brenton Geach)

At last week’s public presentation on South Africa’s strategy for tackling the spread of Covid-19 virus, Professor Salim Abdool Karim made a persuasive argument about the need to identify and stamp out epidemic hotspots.

Demonstrating an admirable ability to communicate epidemiological and clinical information to a lay audience, Professor Salim Abdool Karim used the compelling metaphor of small flames to describe in his public presentation on 13 April how one or two cases in a particular community can quickly grow into large fires of uncontrolled community spread. Our testing and tracing strategy is aimed at putting out these small flames, before they engulf our health system and communities.

However, as has become heartbreakingly clear in the past three weeks, the consequences of this epidemic are not simply epidemiological. The people of South Africa are suffering not only symptoms of Covid-19, but also, and arguably to an even greater extent, from the symptoms of hunger, joblessness, stigma and xenophobia. And just like the coronavirus, these pathologies are at risk of spreading through our communities like wildfire.

At the moment one of our most valuable sources of epidemiological information is the contact tracing pods that have been set up across the country. These are dedicated teams tasked with following each and every positive case reported to the Department of Health.

Information is collected about the person who has tested positive, who they live with and who they have had contact with since becoming infectious. Importantly, this process is also used to inform the department of the challenges that people might face in self-isolating or preventing the spread of the virus while they are sick. In some cases it also alerts us to the dangers and threats that Covid-19-positive people might face — such as stigma or xenophobia. Through the efforts of the contact-tracing teams, a number of Covid-19-positive people facing stigma and discrimination at home, have been moved, along with their families, to safe isolation facilities.

However, even these teams of highly trained, well-equipped professionals can only respond to the needs of confirmed cases and their known contacts. Community-based screening and testing might help us find the epidemiological flames before they spread, but it cannot identify the sparks of unrest and injustice, of fear and anxiety, and poverty and despair, that turn neighbours into strangers and communities into bubbling cauldrons waiting to boil over.

Finding and extinguishing the sparks of stigma, xenophobia, hunger and poverty cannot be achieved through the collection of epidemiological data at all. Rather this requires social data, collected and reported by professors of the street, based on real-world experience.

Community Action Networks (CANs) like Cape Town Together, Eastern Cape Together, and more recently Gauteng Together are some of the community-based groups organising at the local neighbourhood level, and are generating this much-needed social data or community-level intelligence.

Pamela Lindelwa Silwana, a member of the Gugulethu CAN, started cooking for her community two weeks into lockdown because people in Gugulethu were hungry. Soon she and her mother were providing food to an orphanage and an old-age home. The Gugulethu CAN was established to respond to Covid-19, but Pamela says they knew right from the beginning that food was going to be a major problem.

“People would be going home to empty cupboards, and would literally die of hunger, before they got sick from Covid-19,” she says. The need for food far exceeded their capacity to produce it, so Pamela and her mom supported a neighbour to reopen a restaurant that had closed due to lockdown as a community kitchen.

“Nobody can stay home to #stopthespread, if they have no food.” If government officials were listening to voices like Pamela’s, they would know that behaviours will not change until bellies are full — “if people know they are getting help from the government, they will stay home and not panic.”

In other contexts, at different times, it is fear and stigma that are the most urgent issues. Late on Saturday night, a frantic phone call from a member of the Phillipi East CAN, Siyasanga Vilakati, raised the alarm about a quickly unfolding crisis in her neighbourhood. Siyasanga relayed the story of a woman suspected of having Covid-19, who had been heard shouting, “I don’t want to die alone” and reportedly running away from an ambulance. The woman ran to her sister’s house, “but her sister’s neighbours threatened to burn down the house if she stayed,” says Siyasanga, “because they believe she was going to spread the virus.”

The woman ran nearly 10km over two days, across three different informal settlements in Philippi, fleeing out of fear of being taken away to die. But everywhere she went, she was not welcomed, partly because she was potentially infectious and partly because she is not South African. Siyasanga says that most people in Phillipi don’t have a good understanding of how Covid-19 is spread, or how to prevent it, and that this fear breeds discrimination.

“Covid-19 could easily lead to xenophobic attacks if we don’t make sure people are well informed,” she adds. The woman turned out not to have Covid-19, but the sobering events of that night demonstrate that fear and stigma are as big a threat to people’s lives as the virus itself. “Fear is dangerous,” says Siyasanga.

The 13 April press conference focused predominantly on the epidemic trajectory – plotting curves on graphs and talking about how to squash those curves into the ground (or the x-axis). Professor Karim explained that the curve represents cases, or the rise in the number of infections. The truth is though, that those curves represent people – human beings whose lives are closely intertwined with the lives of others, and will invariably be affected by this virus and the country’s response to it.

Right now, it is the job of every single government official, politician and bureaucrat to be responsive to the unintended or unexpected consequences of the lockdown, and minimise its impacts as far as possible. This can only be achieved if we listen to, and take seriously, stories like Pamela’s and Siyasanga’s.

We can learn so much just by listening to people’s experiences. For example, that right now hunger is a much bigger problem than Covid-19 for most people. Or that stigma is bubbling beneath the surface and is about to boil over. The government could address these issues if it just paid a bit more attention to the community-level intelligence being generated by those organising at the neighbourhood level.

While Professor Karim’s presentation should be commended for its transparency and lucidity, there was an important voice missing from the panel of clinicians and academics. Where were the professors and epidemiologists of the street, who can speak to the crucial truths of hunger, homelessness and precarity that this pandemic has laid bare? It is imperative that we make space for bottom-up intelligence to inform our response to this pandemic. DM/MC

Eleanor Whyle is a PhD candidate in the Health Policy and Systems Division, University of Cape Town and a member of the Collaboration for Health Systems Analysis and Innovation (CHESAI) and the Public Health Association of South Africa (PHASA).

Manya van Ryneveld is a researcher at the School of Public Health, University of the Western Cape and a member of CHESAI and PHASA.

Dr Leanne Brady is a health activist and public sector doctor working in Emergency Medical Services, Western Cape Department of Health, and a member of CHESAI and PHASA.

Kentse Radebe is based at the Bertha Centre for Social Innovation and Entrepreneurship and her work focuses on processes and levers that lead to social innovation with a focus on health and mental health.

All authors are active in the Cape Town Together Community Action Network, a rapid community-led response to Covid-19.