By Centre for Analytics and Behavioural Change• 23 April 2020 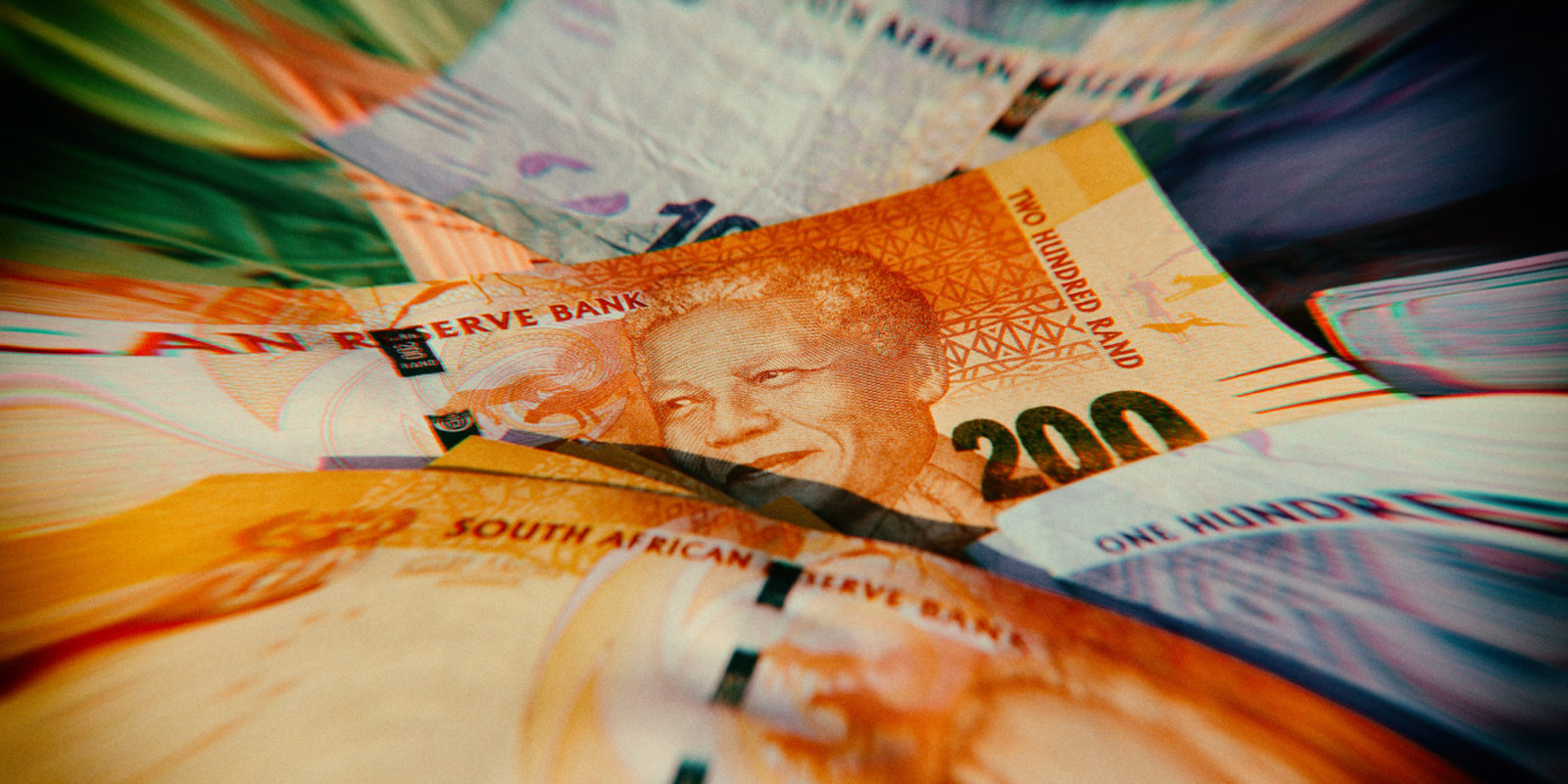 The R500bn South African relief effort – as a ratio of GDP – ranks among those of developed nations such as the US. (Photo: Adobestock)

This is a summary of the trending, highest impact, and most active themes and narratives related to social cohesion in South African public-domain social media conversations on 22 April 2020.

Social grants was the top trending topic on 22 April by volume, with a 75% burst by the end of the day. Conversation about the IMF contributed the highest volume of posts. The term “extraordinary times” was the third biggest topic of conversation, with a burst of 73%.

A tweet by “Man’s NOT Barry Roux” at 11.18am led to many people airing their opinions. @Ray49579273 was adamant that the R500-billion package spells greater financial burden for SA in the years to come. The tweet gained over 5,900 likes – the profile has nearly one million followers.

At 10.49pm a tweet explained why Brian Kantor of Investec feels the printing of extra money was required to deal with the impact of the pandemic in these extraordinary times. It was retweeted 123 times through the night, and this conversation is likely to grow.

A thread tweeted by @iamkoshiek (“your-go-to-finance-bro”) at 8.43pm explains the impact of the IMF loan and printing money on the economy. The thread has been retweeted over 1,000 times.

Social grants was the top trending topic, with many sharing details on how to apply for the unemployment grant.

A statement from the Department of Social Development and Sassa explained how people should apply.

The EFF praised the introduction of a basic income grant for the unemployed. They, and others, are calling for the grant to be extended beyond the six month crisis period.

SAFTU suggested that a better solution would have been a Universal Basic Income Grant, echoing the hopes and disappointment of many.

Lynette Maart posted a call for a new mechanism to deliver the basic income grant that will not reduce the cash value of the grant, or risk it being seized to pay off debt, as is being done in the US.

The IMF was mentioned by 1,340 unique authors in the context of the Covid-19 lockdown.

Sentiment toward the IMF loan was rather negative as many focused on the debt burden that the loan would place on future generations of South Africans.

As many as 318 people were talking about @PearlPillay’s tweet that while we want the President to succeed, we can also oppose the IMF loan: “Taking money from the IMF is like trying to keep warm by setting yourself on fire.”

Some, like @Guund00 reached for conspiracies, saying Covid-19 was created to drive more countries into debt.

@IsaahMhlanga, a chief economist at Alexander Forbes, pointed out that there seems to be very little understanding of IMF loans.

The word “corruption” spiked throughout the day – indicating a primary concern among many South Africans around the management of funds to be made available to stimulate the economy.

@MawandySompisi tweeted that they hope there will be less corruption in the R500-billion allocation.

@Cheeky_White commented that Covid-19 was a catalyst for the inevitable in SA, as rampant corruption has prevailed for a long time.

Many responses to corruption followed Dr Nkosazana Dlamini Zuma’s post that “corruption during this time and in any other time, must be condemned with the contempt it deserves”.

Conversation about the additional SANDF deployment was the second largest by volume for the day.

The suspension of a BrandSA Board Member was sixth largest by reach, trending with a 70% burst.

Communications Minister Stella Ndabeni’s admission of guilt was the third biggest story by reach, driving the 11am to noon spike, and ending the day with a 70% burst . The topic was also the third largest by reach on social media and created a stir on Twitter.

On 22 April Minister Ndabeni-Abrahams was charged with contravening Section 11B of the Disaster Management Act. She had violated lockdown rules on 5 April by having lunch with ANC NEC member Mduduzi Manana. She accepted the charges against her and paid a R1,000 admission of guilt fine.

Many called for her resignation on Twitter, while others labelled the punishment as preferential treatment which showed that Ministers were above the law.

After the President’s address on 21 April, DA leader John Steenhuisen posted a letter from the President informing Parliament of the deployment of the entire SANDF to enforce the lockdown.

The deployment was confirmed by the government on 22 April.  The deployment of 73,000 more SANDF members is estimated to cost R4.6-billion.

South Africans tweeted their approval and concerns around the decision: some said that South Africa would be spared the R4.6-billion burden if the lockdown rules were taken seriously, while others highlighted recent incidents of apparent abuse of power by the SANDF, and how this would play out with 73,000 deployed.

Police Minister Bheki Cele released crime statistics for March-April compared to the same period in 2019. Murder rates were down by 72%, rape down by 87%, attempted murder down by 66% and domestic violence down by 69.4%. Cele attributed the decreases to the ban on alcohol sales and commended police officers for a job well done.

While the news was welcomed by South Africans, Twitter user @VanniePlaas pointed out: “It’s actually common sense and logic. The only way to fight crime is by visible policing, not banning alcohol or cigarettes. Currently, our streets are full of SAPS and army members – visible policing. ”

Tebogo Mamorobela was suspended from the Board of Trustees of Brand South Africa pending an investigation after a video of her partying with friends and popping champagne on 12 April in violation of lockdown regulations surfaced on social media. She will face an enquiry into misconduct and bringing the organisation into disrepute.

The announcement came from the Presidency’s official Twitter account and took Twitter by storm: it was the sixth-largest topic by volume and the seventh biggest by reach.

Many questioned the harsh treatment compared to Ndabeni-Abrahams, who only received a slap on the wrist.

The #CovidNurseStayAway conversation attracted over 3,000 unique authors on 22 April. It drove the 6pm to 7pm spike in volume, and trended with a 73% burst.#covidnursestayaway was one of the day’s top topics by volume.

#covidednursestayaway grew from the frustration of medical staff at the front line of the pandemic after the President announced financial relief measures for South Africans on 21 April. Healthcare workers are protesting against the lack of Personal Protective Equipment and financial incentives to do the high risk job. Nurses are asking for a danger allowance and tax-free salary or tax relief.

Twitter was divided on the topic. While many agreed that healthcare workers should get financial incentives for fighting the pandemic, many others likened their action to extortion, like soldiers asking to be paid extra for going to war.

The start of human vaccine trials in the UK was the fifth biggest trending topic for the day.

@eNCA reported “The UK will begin human trials on a possible #Covid19 vaccine on Thursday. Over 500 healthy people between the ages of 18 and 55 will take part in the first phase of the trial. It’s hoped the vaccine will be ready by September”. Germany has also received the green light to test vaccines on humans.

Many lauded the speedy effort on the UK’s behalf but were concerned about the efficacy and safety of a vaccine being developed so quickly.

The launch of a Covid-19 herbal “remedy”, claimed to prevent and cure Covid-19, by Madagascar’s President, Andry Rajoelina, drove a spike in volume between 7am and 8am, with over 3,000 posts on the topic.

Many lauded the remedy as proudly African grown and not associated with large corporations, and cited Madagascar’s low infection rate (121 infected with 0 deaths) as proof that they were doing something right.

The EFF’s Floyd Shivambu asked “what are we waiting for?” but his party colleague Dali Mpofu warned “I hope this guy is not planning to visit South Africa soon… After the 21-gun salute those skip en donner SANDF guys will make him roll & do push-ups on the grass outside the Union Buildings for having broken the lockdown regulations on fake news!”

The news story about the efforts of the Stellenbosch community was the second biggest social media story of the day by impact.

Confirmation that DJ Zinhle will host another  PJ Party was the top topic by impact.

Following the success of her first online party which amassed over 200,000 views last week, DJ Zinhle has announced another online stay at home pyjama party to be streamed on Facebook, Twitter, Instagram and YouTube live.

The planned pyjama party was the top news story for the day and her 3.1 million followers on Instagram responded well to the announcement, with over 8,211 likes.

#CastleLightUnlocks drove the 6pm to 7pm spike in volume.

@castlelitesa tweeted about episode 2 of their stay home music sessions. Featuring Bas, Rouge Rapper and Tumi, it streamed on YouTube at 7.31pm with over 3 000 viewers.

Stellenbosch FC and Cape Town City FC chipping in to help fight the pandemic was among the top three stories.

Conversation peaked between 1oam and noon as news about the support efforts spread.

@lasizwe, known on twitter for their witty banter around uniquely South African topics, tweeted their frustrations with the lockdown. About 4,300 people showed their support by liking the post and encouraging them, saying they were  not alone.

@RosebellK posted a video of her making a basket, and asked others what they were doing to beat the lockdown blues. So far, the video has been viewed over 21,000 times.

@Boity said that “they miss being tired of going out every weekend”. This got many people talking and sharing the things that they miss most about life before the lockdown. DM