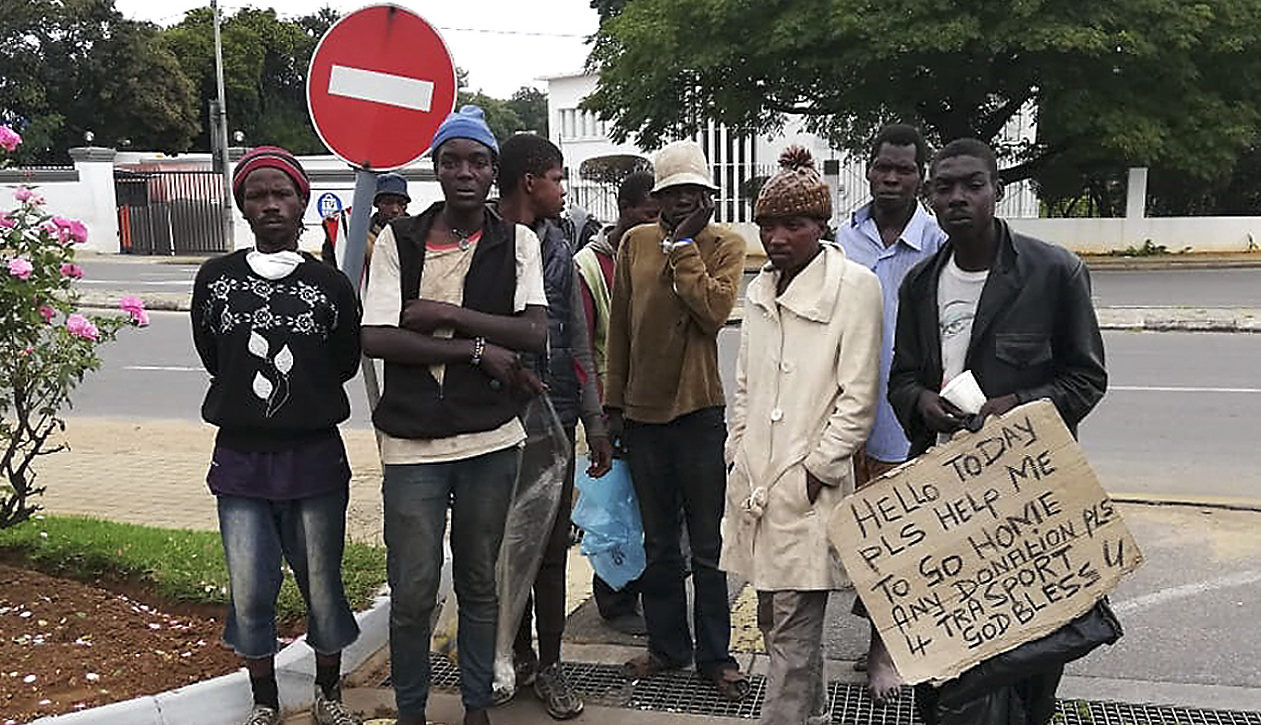 A group of homeless people say they will rather try and survive on the streets than shelters provided by government. (Photo: Amy Green/Spotlight)

As most people in South Africa prepare for another week in their homes under South Africa’s national Covid-19 lockdown, Amy Green spoke to some of Johannesburg’s many homeless persons about why they choose life on the street over government shelters.

As South Africa moves toward what is expected to be the last week of a five-week Covid-19 national lockdown, and most residents gear up for a further week in their homes, Spotlight spoke to some of Johannesburg’s many homeless persons about life on the street. The individuals we spoke to continue to choose the streets over shelters despite allegedly experiencing police brutality and increasingly colder weather as we head into winter.

On Monday, 30 March, 28-year-old Lindokuhle Buthelezi says he was woken up by the sun from his makeshift bed near the highway onramp on Glenhove Road in Oaklands, Johannesburg. Between 7am and 8am he took up his usual position at the intersection of Glenhove Road and Central Street, standing next to the robot to plead with the drivers of passing vehicles to spare some change.

Buthelezi was well aware that his presence was even less desirable than usual, considering that under the national lockdown, instituted only a few days previously to reduce the spread of Covid-19, living on the streets was effectively banned. He, and many of his friends, had been taken to a shelter near Hillbrow on the day the national lockdown was instituted, however, after only a day, he decided that those living circumstances were even worse than the streets and he returned to the space he calls home.

But this Monday, as the robot turned green, he noticed that the only vehicle on the road remained stationary. Its only occupant, an off-duty police officer still in his uniform, paused for a few seconds while Buthelezi crossed the road to stand at the perpendicular robot. Buthelezi says he did not hear the officer get out of his car and run up behind him. He only realised this when he felt a blow to the side of his head.

“He hit me and hit me and I fell down. He pressed me with his foot on my neck and I could not breathe. He kicked me and kicked me. He tell me he don’t want me in the streets. He tell me Ramaphosa said he must do that to me,” (sic) Buthelezi told Spotlight.  The alleged incident shook Buthelezi enough for him to move to another intersection further along Glenhove Road, but not enough for him to return to a shelter.

Cornell Hennessy, 38, moved to Johannesburg from Durban only a few days before the beginning of the national shutdown. He showed Spotlight a swollen bump on his right arm, an injury he said was caused by police with rubber bullets in town at the beginning of the shutdown.  Spokesperson for the South African Police Service (SAPS), Brigadier Vishnu Naidoo told Spotlight that he could not comment on the above incidents as neither of them had been officially reported to SAPS.

Despite this, Hennessy is on the streets begging for money. He said the risk was worth it considering how desperately his family needed the money. “I have a three-month-old daughter and my wife is dry, she doesn’t have milk. The shelter doesn’t provide milk so I need to make money so my baby doesn’t starve. This is the most stressful time for us because formula is so expensive,” Hennessy told Spotlight from his place at the intersection of Glenhove and Oxford road.

Hennessy’s task has been made that much more difficult as fewer cars on the road during the lockdown means less money for him and his peers.  Twenty-eight-year-old Fanwele Shiba, also stationed at the intersection of Glenhove and Oxford roads, told Spotlight that daily earnings, which usually total about R80 have dropped by more than half. He said he would be “lucky” to get R30 in a day under the lockdown.  Both Shiba and Hennessy were taken to a shelter in Hillbrow called 3 Kotze when the lockdown began. “They didn’t feed us there,” said Shiba. “They gave us three slices of bread. That’s it, the whole day.”

He also said that 100 men were crammed into a room meant for 30 people and that they weren’t given blankets.  “I know this virus is dangerous and can affect us anytime, anywhere. I also know we shouldn’t be so many people in such a small space, and that there should be masks, gloves and sanitising – there wasn’t anything like that there,” said Shiba.

City of Johannesburg spokesperson Nthatisi Modingoane told Spotlight that he has not “received any reports of police brutality and we have worked tirelessly to get people off the streets”.  He did however admit that the city experienced overcrowding problems in shelters at the beginning of the lockdown period.  Since then we have allocated more spaces for homeless people, largely in recreation centres across the city,” he said.

According to Modingoane 175 such centres have since been allocated as temporary shelters for homeless individuals. He said the city has also partnered with a number of non-governmental organisations to resolve the food shortages at such facilities.  “The problem is that people want to go back to the street, and we have deployed social workers to try to convince people to heed the calls for a lockdown. But when people are used to being free in the streets, it is very difficult for them to change their ways,” he said.

‘They don’t understand our lives’

Johannes Khumalo, who lives and asks for money at the intersection of Glenhove Road and Central Street, told Spotlight that “those shelters are not for me”. “I wasn’t fed for three days, only some bread. I will not go back,” he said.  The 11 friends surrounding him nodded their heads in agreement.

Khumalo was one of the witnesses to the incident between the police officer and his friend Buthelezi. “I will continue to sleep in the streets, I just hope the cops can respect us and leave us alone. They don’t understand our lives,” he said.  Khumalo and many of his friends are addicted to drugs and for them this issue supercedes the need for isolation under the national lockdown. In the shelter they can neither get drugs nor the money needed to purchase drugs.

‘This is my home now’

Tsepho Msibi, 32, said he is not using drugs, but he will not return to one of the city’s shelters based on his first experience there at the beginning of the lockdown.  “There was not enough food and no blankets,” he told Spotlight from his station at the intersection of Glenhove road and Oxford road.

“I know about corona and that we should wear gloves and masks,” he said. He wears one blue glove over his right hand. Although it is past noon, he has only made R8.50.  “I’ve spent seven years on the streets and this is my home now,” he said. “I just pray I can make enough money for pap today.” As the robot turns green, he walks to the opposite intersection to ask the driver of the single car stationed at the red robot if he can spare some change.

On Tuesday this week, President Cyril Ramaphosa addressed the nation on measures government is taking to mitigate the impact of the Covid-19 pandemic that “has resulted in the sudden loss of income for businesses and individuals alike”. The second phase of the government’s economic response to the outbreak includes a “massive social relief and economic support package of R500-billion”.

This package will be directed to supporting health initiatives, combating hunger and protecting wages. The government will also be introducing a six-month coronavirus grant to reach the most “vulnerable families”. Existing social grants will be increased for this period and unemployed persons will also be able to access a R350 Social Relief of Distress grant over the next six months. At this stage, it is still unclear how individuals and also the homeless like Msibi, Hennessy and Khumalo, will be able to access this grant and what the specific eligibility criteria will be.

This article was produced by Spotlight – health journalism in the public interest. Like what you’re reading? Sign up for our newsletter and stay informed.