Gauteng demolitions: Red Ants in all-out war on the poor 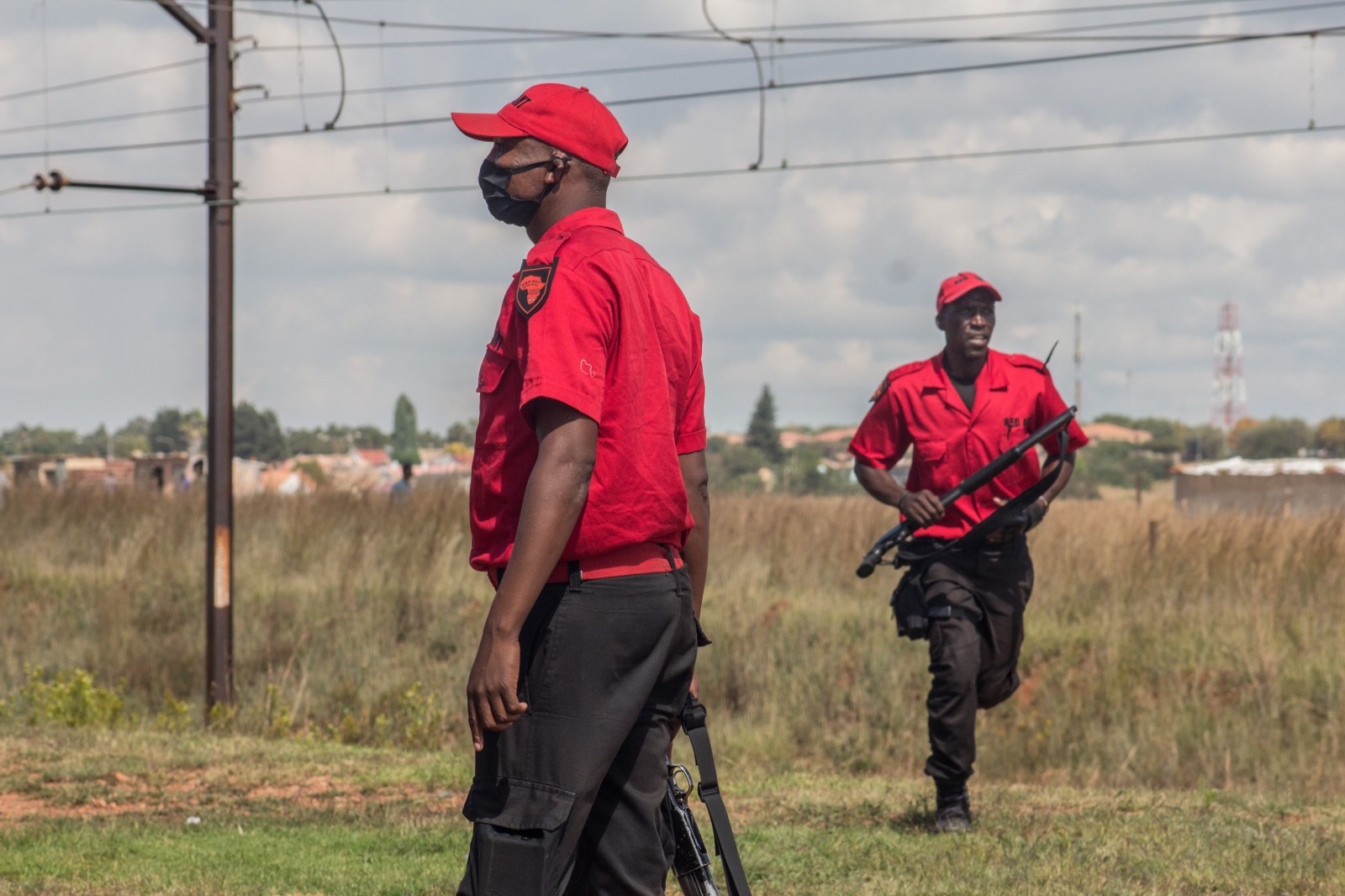 Red Ant personnel keep residents of Lakeview informal settlement in south Johannesburg at bay as their colleagues leave en masse, after demolishing homes and shacks in the area on 21 April 2020. (Photo: Diana Neille)

Almost 575 shacks and at least a dozen brick and mortar structures housing an estimated 1,000 men, women and children in settlements south of Johannesburg have been violently demolished and allegedly looted over two days by the Red Ants.

The Johannesburg Metro Police Department (JMPD), aided by the notorious Red Ant Security, Eviction and Relocation Services, appears to be using the lockdown period to demolish and clear hundreds of what they say are illegal and unoccupied structures on contested government land in Lawley, south of Johannesburg, where Lakeside, Kokotela and several other large informal settlements have developed.

The demolitions are unlawful, however, and photographs and accounts from residents of the community of Lakeview tell a much more malevolent story: that of an all-out war on the poorest of the poor, at a time when they are at their most vulnerable.

The young man stood motionless, gaping, rooted to a plank of wood that, 30 minutes before, had held up the small zinc shack he called his home. From there he had sold fruit and vegetables, gum, snacks and airtime to his neighbours to make a living. Red Ants personnel with weapons took it all, he said, along with the R1,800 in cash for new stock he had in his pocket, his phone, furniture, stove and even bits of the structure. What was left lay at his feet.

“They didn’t show any papers,” Rodgers Mathebulo said, dazed and quaking from shock. “They said they wanted to see what was inside. Then they took everything.”

As he relayed his story over the incessant sound of rubber bullets being fired, 20m away a dozen or more Red Ants pulled two brothers out of their shack and beat them with a crowbar until the JMPD intervened. Up until the Covid-19 lockdown was enforced by President Cyril Ramaphosa on March 26, the brothers, who identified themselves as Doccie and Mvelasi, had been building a brick and mortar house on an empty plot, but had only got as far as putting up the walls. The windows they’d stored for installation lay smashed inside the shack, the cash in their pockets and their mattress spirited away.

Almost 575 shacks and at least a dozen brick and mortar structures housing an estimated 1,000 men, women and children, have been violently demolished and allegedly looted over two days by the Red Ants, under the watchful eye of a heavily armed JMPD.

During a three-hour barrage, officers fired hundreds of rounds of rubber bullets at residents trying to protect their homes, sometimes at close range. Residents reported at least three people injured by the projectiles, including a man who was shot in the neck. He was reportedly admitted to Chris Hani Baragwanath Hospital in Soweto.

At least 16 people were arrested, and witnesses also reported seeing JMPD officers refuse to help an elderly woman seek medical assistance after she had what appeared to be a shock-induced seizure on the floor of her shack.

“Our community doesn’t fight, so why are they shooting people?” asked Patrick Matome, who has been saving up to build a house in the settlement for over three years. He said his neighbour’s half-built structure only avoided demolition because the Red Ants could not get their bulldozer across the railway line. “They told me they are coming back for this house,” he said.

“Many people are left homeless now, because they stay in those shacks with their kids and there was no alternative accommodation provided. So I really don’t know what’s going to happen.”

Residents of Lakeview, a sprawling informal settlement 15km outside of Lenasia in the south of Johannesburg, say they have been doing their best to adhere to the lockdown regulations, despite the lack of food, water and appropriate shelter. Many live in precarious structures that appear to have been built recently, but there are many more formal shacks and even brick and mortar homes scattered across the hillsides. All of them are illegal: this land belongs to the Department of Human Settlements, which has been fighting these communities in court alongside the City of Johannesburg since the settlements were established in July 2018.

“A few days after we erected the first structures here, they came and demolished them, because people in the formal areas were complaining” said Farouk Jardine, the spokesperson for a local community forum that has been advocating and facilitating land occupation. Jardine admits to selling two-bedroom shack structures to would-be residents for as much as R3,500, allegedly to help pay for the ongoing legal battle with the government.

“We immediately took the municipal government to court and won a spoliation order,” said Jardine. (A spoliation refers to the wrongful deprivation of another person’s right of possession).

But then the provincial government got involved and a number of court hearings followed. The last one was scheduled for February 10, but representatives from Human Settlements didn’t show up to court, he said.

The Gauteng provincial head of the Human Rights Commision, Buang Jones, confirmed that the Department of Human Settlements and the City of Johannesburg had approached the High Court to interdict and restrain occupiers from erecting structures in the area. The matter was postponed to March 27 and then removed from the roll entirely, making the current demolitions and evictions unlawful.

“There is no new court order which permits the City to enlist the services of the Red Ants to demolish or evict at this time,” said Jones.

“The government is within its rights [to carry out this action], but they must have a court order. That’s why the demolitions were halted today, because they couldn’t produce one. They have been relying on court orders obtained in 2019, some of which have lapsed,” he said.

The action is also unlawful according to the National Disaster Management Plan, enacted by Ramaphosa in late March. According to section 11CA of the regulations: “No person may be evicted from their place of residence, regardless of whether it is a formal or informal residence or farm dwelling, for the duration of the lockdown.”

Unlawful land occupations have become increasingly common and hard to control, as the poor and working-class flock to the outskirts of Johannesburg in search of jobs, and the government falls further and further behind in providing promised housing.

“There are opportunistic elements in the sale of these illegal structures and land,” said Buang. “Syndicates, some of which are affiliated with the different political organisations, are making money out of this.”

“We cannot condone this unlawful conduct: occupiers should stop erecting structures and should work with the city to ensure housing is done in a fair manner,” he said.

“[At the same time], we are concerned about the heavy handedness and the brute force used in evictions, particularly on the part of the Red Ants. We really need to find a human-rights based approach to housing development,” Buang said.

While this years-long battle plays out, with government laying the blame at the feet of land syndicates while turning a blind eye to the abuses of power at the hands of its law enforcement agencies, hundreds of the country’s most vulnerable citizens are left homeless and traumatised.

“Everyone was in their shacks for the lockdown,” said Matome. “Where must we run to now? We didn’t even know what coronavirus was, but we respected the voice of government and stayed in our shacks. Where must we go now?” DM