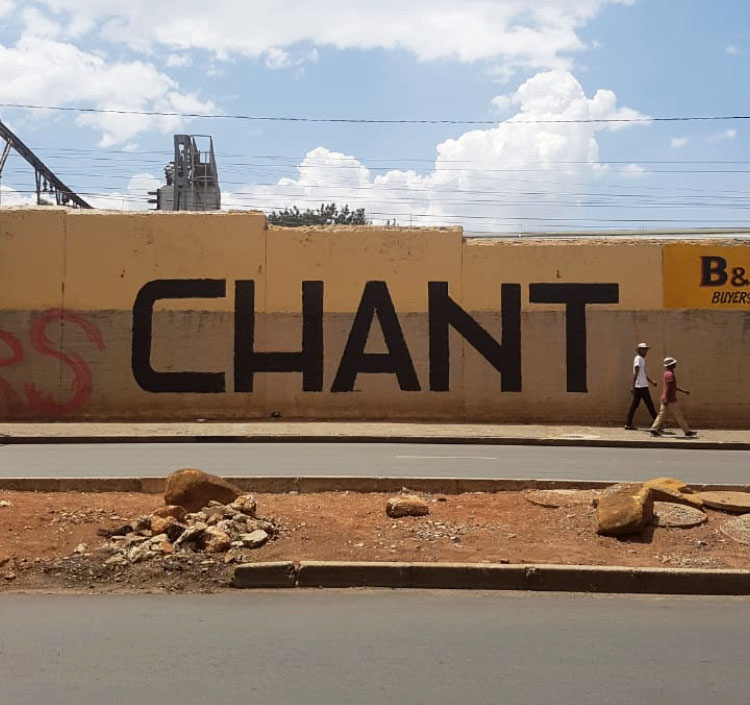 If you have passed through some of Johannesburg’s more bustling reaches recently, you may have spotted a statement, or an invitation, written on the walls in tall, block letters: ‘CHANT. CHANT. CHANT’.

The words were painted by interdisciplinary artist Faith XLVII on one of her recent trips to the city, and form part of a broader body of work the artist is moving towards – one that seeks to both highlight the daily din of the contemporary world, and carve out pockets of quiet reflexivity among it all.

Faith XLVII, also known as Faith 47 or simply “Faith”, produces her work in the studio and the streets. A Cape Town-born artist, she’s been based in Los Angeles for the past three years, but travels constantly. To date, Faith’s travelled to, and exhibited work in, cities such as Hong Kong, Miami, New York, London, Johannesburg and more.

We’ve been emailing back and forth for the past month, each of us navigating our respective cities and working lives under the growing pandemic of Covid-19. When I first reached out, Faith was set to host her solo exhibition CHANT at Cape Town’s Everard Read Gallery in April 2020. Since then, both the US and South Africa have gone into states of lockdown, CHANT has been postponed to a post-Covid-19 period. Still, we continued to email back and forth, and I continued to do my research on Faith, a name I recall seeing on walls all over Cape Town in my younger years.

While Faith’s career traces an adventurous and far-reaching global network, Cape Town bore witness to the origins of her love affair with language and mark-making. It was at the old, seaside Clovelly train station where she first practised the art of spray paint on a wall, the graffiti writer Wealz130 standing beside her as she learned.

The late ‘90s and early 2000s saw Faith becoming a prolific name on the South African graffiti scene, steadily expanding her practice into street art and studio-based work as she went along. The 2011 book Faith 47, published as part of the From Here to Fame/On the Run series of graffiti and urban art books, brilliantly chronicles this phase of Faith’s work and serves as a repository of much of her significant pre-2010 work. It is in this book that you come to understand the profound impact that South Africa, and Faith’s determined and curious navigations of it, had on her work. Ex Animo: Faith XLVII, published in 2019 by Drago, subsequently documents the artist’s later career, following her international large-scale mural work and studio-based works from 2012 to late 2018.

The two books show that while much has changed for the artist, old passions, concerns, joys, and heartaches endure. Animality, spirituality, human rights, and the politics of power all remain central themes running through Faith’s work. And while a love for flexed letters and abandoned spaces has never left her, Faith’s work has grown to inhabit gallery spaces, universities, multi-story buildings, and more. Crucially, city spaces have remained central to her practice, both as a site and a source of inspiration.

“As much as I mourn for humanity I am also enthralled and obsessed with the cathedrals and temples that we create. Be it to religious ideologies or economic systems,” she reflects. “These beasts, their infrastructure and history. The lives they have seen, fashions, market crashes, technological inventions. These monsters. So glorious in their enormous power. The network of friendships, the fragile economy that holds it all together. The alienation and solidarity you can feel when you are living inside such a structure.”

Language, lettering, and all manner of text remain a core component of Faith’s practice. Phrases, slogans, found texts, and the artist’s own writings all serve to inspire, inform, and frame much of her visual work. For Faith, text and language have always been a vital and cathartic part of her work. “Fonts, alphabets, this is the stuff of human evolution, of consciousness and articulation. I adore lettering and the craftsmanship of letter design. I also adore the political slogans and banners and grim markings on walls that we try to ignore. I find writing and text to be a pure direct form of expression,” she explains.

Animals have become an enduring metaphor in Faith’s city-based works, both occupying city spaces and animating them. Representing or documenting animals in public space also serves to “remind people of their grandeur,” Faith explains. Whether it’s a herd of zebra kicking up dust and jostling up against one another in the restless reaches of the Joburg CBD, a band of horses galloping across the concrete façade of a multi-story LA building, or a pair of swans wrapping around one another’s necks on a Brooklyn rooftop, Faith’s gentle, yet formidable depictions of animals in urban spaces have come to characterise so much of her work. They are as much a mirror of our human lives in the urban sprawl as they are urgent commentaries on the way nature, and our relationship with it, is in a tragic state of disrepair.

Similarly, one of Faith’s later bodies of work, The Unbound, makes use of white flags – the universal symbol of surrender, peace, and a call to end violence. This finds resonance in Entanglement, a work that makes use of various national flags from across the world in an attempt at highlighting the interconnectedness of the world’s countries and peoples. Hand-drawn, deconstructed and overlaid with a simple circular symbol, the work calls into question the many connections and borders – intrinsic and psychological – that we maintain between countries and continents. With the sweeping ramifications of the Covid-19 pandemic, Faith explains how the work takes on a more urgent meaning.

“Once the Covid-19 crisis hit, the meaning echoed far louder. It’s the amalgamation of the countries of the world, they all have their identity and independence but at the core they are essentially interconnected,” she says of Entanglement. “Our economic reliance on each other, trade structures, global travel and its implications, one can see this so clearly with the virus and how it’s stripped the entire world bare of any semblance of autonomy. We are not islands.”

So, where to go from here? How do we begin to make sense of these isolated, yet curiously interconnected times? It is during this moment of global crisis and national disaster that socio-economic fault lines are made more visible, and for Faith, inequality, hope, despair, and power dynamics the world over are recurring points of inquiry. The works in CHANT, on canvas and on the walls of Joburg’s inner city, serve as a pressing reminder to seek out respite, restoration, and centredness in the face of social and economic upheaval.

“It’s a thread that is underlying in a lot of my work, even when it’s not visible it’s still there in the ethos of everything I create,” says Faith. “For the CHANT exhibition I wanted to make it louder. Clearer. These are not works made to be pretty or decorative; these are works made to consider, to dismantle, to question. To be angry. Realistic. Sad. Hopeful.” DM/ML