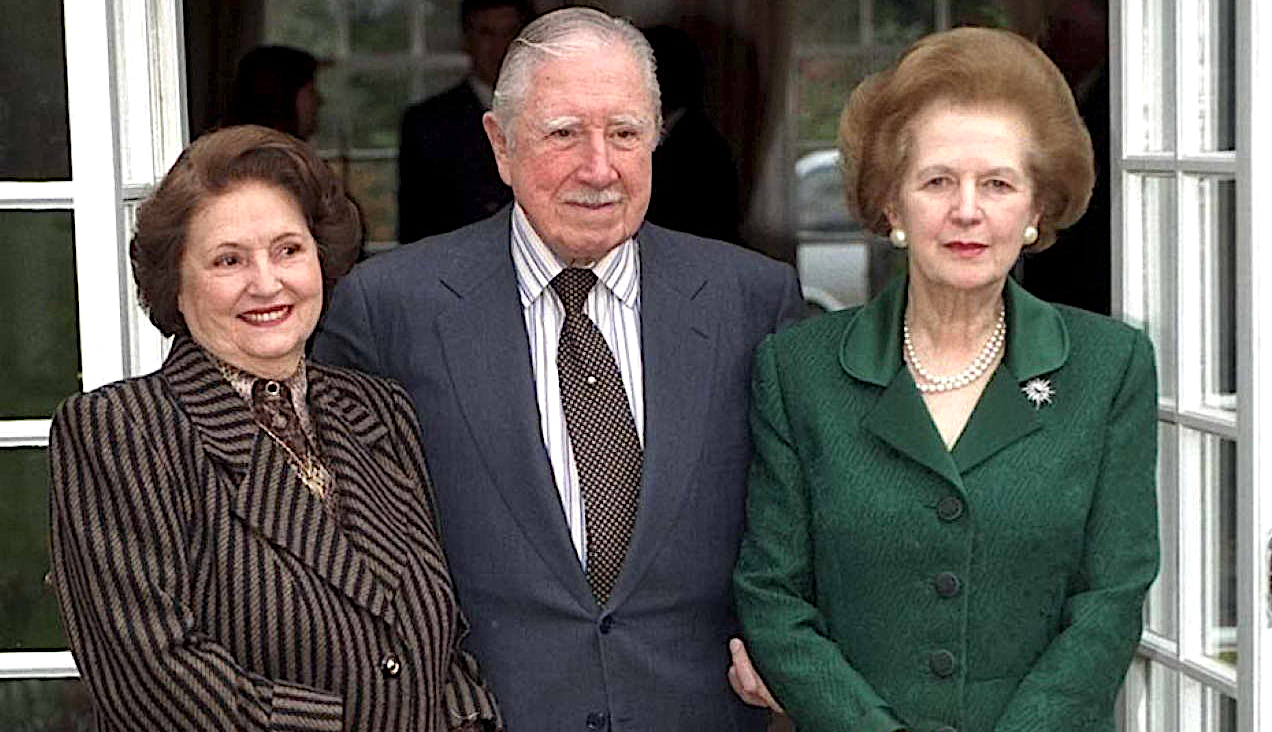 Margaret Thatcher (R) visits ex-Chilean dictator General Augusto Pinochet (C) and his wife Lucia (L) at their temporary residence where he was under house arrest, in Wentworth in Surrey, Britain, on 26 March 1999. (Photo: EPA / Ian Jones)

The British government under Margaret Thatcher misled the public and MPs about its dealings with the Pinochet regime in Chile while it tortured and killed thousands of people, declassified British documents show.

When the Chilean dictator Augusto Pinochet was arrested in London in 1998, Margaret Thatcher became his most high-profile defender. But when she was prime minister, her government was reluctant to reveal the true extent of its links with a regime responsible for the “disappearance” of thousands of people.

Thatcher’s government, which lasted from 1979 to 1990, not only lifted a British embargo on the sale of weapons to Chile imposed by the previous Labour government, it also sold arms that could be used for internal repression while training hundreds of Chilean soldiers.

Thatcher also ended the regime’s diplomatic isolation by restoring a British ambassador to Santiago and authorising the first visits by British ministers to Chile since Pinochet’s coup in 1973.

UK diplomats worked behind the scenes at the United Nations to water down international condemnation of Pinochet. When faced with an outcry in the UK about the torture and disappearance of a British-Chilean citizen, the Foreign and Commonwealth Office (FCO) knowingly withheld information from parliamentarians who enquired about his fate.

General Pinochet overthrew Salvador Allende — the socialist president who was democratically elected in 1970 — on 11 September 1973, to widespread international condemnation. His regime became one of Latin America’s most repressive and bloody in modern history.

Thousands of citizens were herded into Chile’s national football stadium or secret detention centres. After the fall of the dictatorship, a truth commission confirmed that more than 40,000 people were tortured, 3,200 were killed or “disappeared” and over 200,000 fled into exile.

The Labour governments (1974-79) that preceded Margaret Thatcher had cut off economic aid, withdrawn Britain’s ambassador from Santiago and welcomed thousands of Chilean refugees to Britain, in addition to denying arms exports.

Reinstating a British ambassador to Chile was controversial. He had been withdrawn in 1975 in protest at the torture of British doctor Sheila Cassidy, who had been tied to a metal bed frame and given electric shocks.

In January 1980, the Thatcher government agreed to return an ambassador to Santiago even though the Chilean government refused to accept that Cassidy had been tortured. The government accepted a statement from the regime apologising for any treatment she “may have” received, but this form of words meant no investigation or prosecution would take place.

An FCO cable in December 1979 makes clear that the Chilean statement was purely for presentational purposes. It read: “Whereas the Chileans seem to think an agreement to the exchange of ambassadors is contingent on their giving us public satisfaction on these… cases… our real concern is to be able to use these apologies in our presentation ex post facto of an announcement that we have agreed to the exchange of ambassadors.”

Watch: A speech given by Margaret Thatcher calling for the release of General Pinochet after he was indicted for human rights abuses and put under house arrest during a visit to Britain in 1998.

The fate of another British passport-holder also caused public concern in Britain. William Beausire, a 26-year-old born in Chile to a British father and Chilean mother, was not involved in politics, but his sister was married to a leading opposition activist. After leaving Chile to seek work in Europe on a flight via Argentina in November 1974, a tannoy announcement in Buenos Aires airport called him to the information desk. He never arrived in Europe.

Over the next seven months, several witnesses saw Beausire in Chilean prisons, but the authorities refused to admit he was even in the country. Piecing together the story from witnesses, his family discovered that armed men in Buenos Aires airport had put him on a plane back to Chile, where he was held in several secret interrogation centres.

During his detention, Beausire had electric shocks applied to his body, sticks thrust up his rectum and was left hanging from the ceiling for long periods of time. After July 1975, he was never seen again.

In 1981, the BBC broadcast a documentary about Beausire, containing graphic reconstructed torture scenes and interviews with the missing man’s family. Letters of protest poured into the Foreign Office.

Forwarding one of these to the British embassy in Santiago, an FCO official wrote: “We have just received the first letter on the TV programme. Copy enclosed for your amusement.”

The FCO knew that the Chileans had shelved the Beausire investigation but omitted to tell this fact to the 128 MPs and 185 members of the public who had written to them. Only David Owen, as a former foreign secretary in the previous Labour government, was told that the case was closed.

Assistant Under-Secretary of State John Ure queried why facts were being withheld from Conservative MP Timothy Renton. He was satisfied with the response from the FCO’s South America Department, concluding: “Mr Renton… is writing on behalf of a constituent and our reply… will inevitably be passed back to the Chile [solidarity] lobby. It seems unnecessary to give them further fuel for agitation at this juncture.”

William Beausire’s body was never found and no one was ever prosecuted.

The Thatcher government lifted the full arms embargo on Chile in July 1980 and a year later loosened its own restrictions on arms exports, assessing applications on the “likelihood” rather than the “capability” of equipment being used for internal repression.

Thatcher was fully behind the drive to sell weapons, telling Cabinet colleagues in July 1981:

“The present regime in Chile had been a particular target for left-wing propaganda in this country and it was unfortunate that the hollowness of much of the left-wing case had not been exposed, as Chile represented a good potential market for British military and civil goods.”

Less than a month after the arms embargo had been lifted, Cecil Parkinson visited Pinochet in Chile and extolled the economic success of the regime. The British ambassador, John Heath, reported that “Mr Parkinson said that he had also been impressed by the skill and intelligence of the economic team which was directing the Chilean economy and by the high growth rate”.

The ambassador added that Parkinson “commented that some of the businessmen in his party had begun to have feelings that they would like to operate within the Chilean system of free enterprise, despite what Mrs Thatcher was doing in Britain.”

But it was the military links between Britain and the Pinochet regime that were closest. Air force commander General Fernando Matthei, army commander Cesar Benavides and navy chief Jose Toribio Merino all made secret, “private” visits to Britain in 1983 where they met “senior MOD [Ministry of Defence] staff”, according to declassified documents.

Junta member General Matthei returned to Britain several times during the Thatcher years. In May 1986, he met the FCO minister of state, Baroness Young, and dined at the home of Britain’s Chief of the Air Staff, Sir David Craig.

Numerous high-ranking British officers went to Chile, including two visits by Britain’s Assistant Chief of the Air Staff in 1984 and 1986. The British government spent more than £1.1-million on training 255 members of the Chilean armed forces in the UK between 1981 and 1984.

Support at the United Nations

As Pinochet’s military regime became increasingly isolated, Thatcher’s government helped to neuter international criticism of it. General Pinochet met Trade Minister Peter Rees in September 1982 and made a “specific request” that Britain “modify” its position on human rights at the UN.

The UK government then withdrew its support from a December 1982 UN General Assembly resolution condemning Pinochet’s human rights abuses. It also worked behind the scenes to persuade other countries to water down the criticisms in the resolution.

British ambassador John Hickman noted that Chile’s air force commander had expressed his gratitude to the British delegation: “Matthei went out of his way to say that he and other members of the junta were very grateful to us,” he wrote.

Every year throughout the 1980s, Britain continued to lobby other countries at the UN to tone down an annual resolution condemning Pinochet’s military regime. DM

Grace Livingstone is a journalist and an affiliated lecturer at the Centre of Latin American Studies, University of Cambridge, UK. She is the author of Britain and the Dictatorships of Argentina and Chile, 1973-82 (Palgrave Macmillan, 2018), which has just been published in paperback. https://grace-livingstone.com/