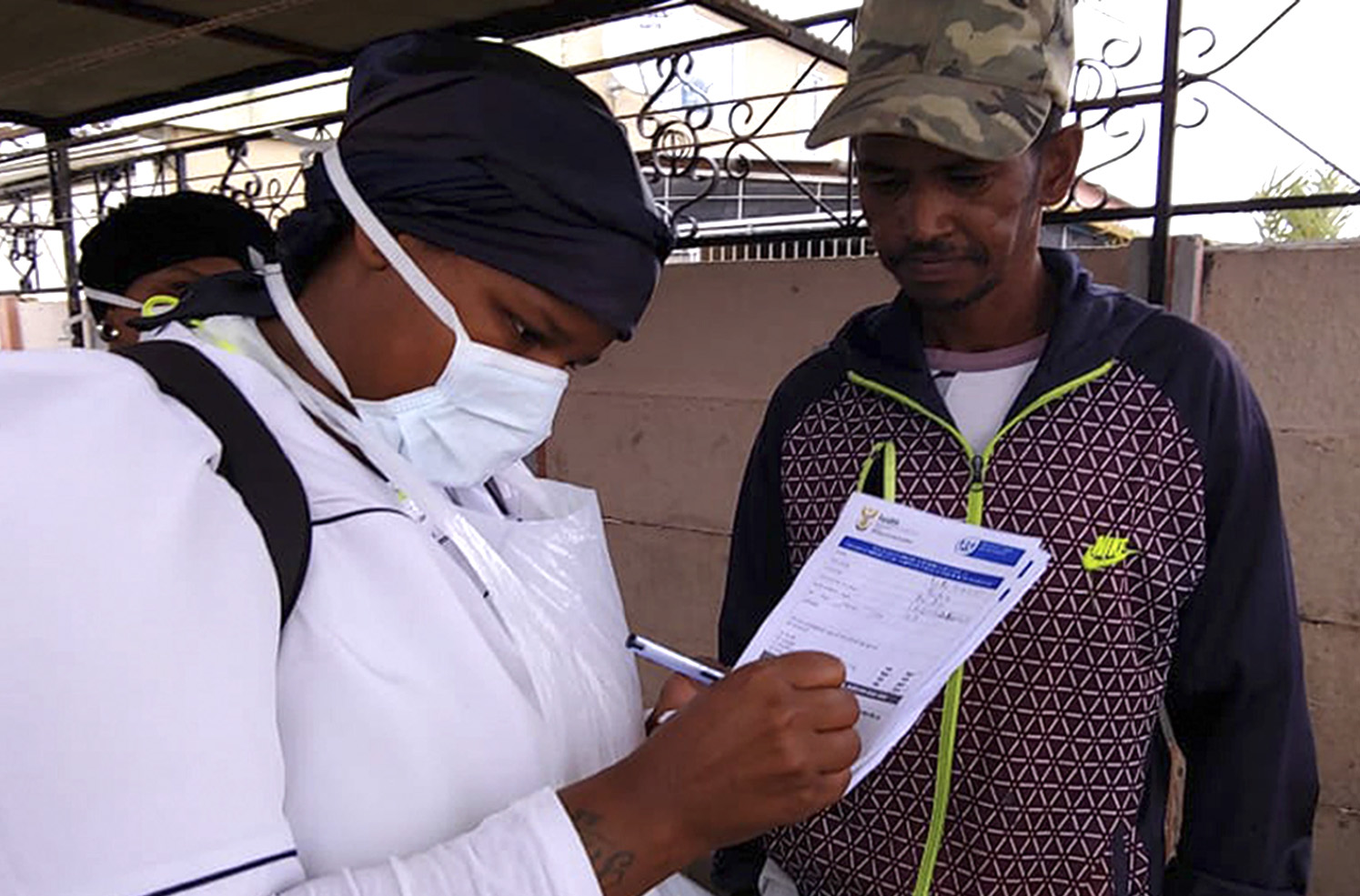 The Department of Health has announced that it will rely on community healthcare workers to assist with tracking and tracing potential Covid-19 cases – but has not provided assurances on how it will protect these workers during the process.

On Monday 13 April, Professor Salim Abdool Karim, chair of the ministerial advisory committee on Covid-19 outlined the government’s plans to increase tracing and testing in communities as part of an aggressive strategy to curb the spread of the virus in the country.

Karim and Minister of Health Dr Zweli Mkhize have acknowledged the importance of expanding screening and testing where people live, focusing first on high density and high-risk areas. To this end, there will be more than 28,000 community healthcare workers (CHWs) going from house to house in vulnerable communities to screen and test people.

Reliance on CHWs to provide healthcare services is not new. In much the same way that their interventions are central to the tuberculosis and HIV responses, so too are CHWs going to be critical to South Africa’s response to Covid-19. This partly because they are already embedded in communities and are able to assist in tracing those who are at risk of contracting the virus. They will also continue to be instrumental in tracing and monitoring even after the lockdown has ended.

While this bold and decisive action is timely and necessary, it is unclear how the government intends to protect CHWs amidst reported shortages of personal protective equipment (PPE).

CHWs across the country stand ready to assist with efforts to ensure that the virus is contained, but they are deeply concerned about their safety. A telephonic survey of CHWs in Gauteng, KwaZulu-Natal and the Western Cape, in the week in which President Ramaphosa announced the lockdown, revealed worrying inconsistencies in information regarding training, the availability of PPE for CHWs and standard operating procedures across and between provinces.

The provision of personal protective equipment

CHWs are expected to conduct house-to-house visits to assist with tracing and are therefore at high risk of exposure as they are likely to encounter infectious individuals (some of whom may be asymptomatic). If they are exposed, there is also a risk of cross-contamination across the households that they visit.

Ensuring that CHWs are equipped with the appropriate PPE and carefully trained on its optimal use is therefore critical. To date, the department of health, as far as we are aware, has issued no guidance specifically to CHWs regarding the kinds of protective equipment with which they will be provided.

When the health minister briefed the public – and more recently MPs during a parliamentary briefing – he referred to “healthcare workers” who will be provided with PPEs. In his assurances, he has not publicly referred to CHWs as a distinct group. Mkhize has encouraged the use of masks for the public – even if they are made from cloth – but CHWs will require proper medical masks, according to advice from the World Health Organisation.

The case for the provinces

The responsibility of mobilising and training CHWs has been left to the individual provinces. Yet, the South African Constitution emphasises cooperative governance. While provinces are responsible for their own health services, there are also critical and related national and local government responsibilities. There is an urgent need for national coordination to ensure consistent information and application of protocols and operations.

It is not clear if the 28,000 CHWs who will be doing the testing and screening are being drawn from the existing cohort of CHWs who form part of the Ward Based Primary Healthcare Outreach Teams (WBPHCOT), or whether a new team is being recruited specifically for this purpose. This is important for two reasons:

To date, there is no standardised protocol for the mobilising and training of CHWs in relation to the tasks allocated to them in terms of the Covid-19 response. In one province, CHWs have been told to remain at home and not conduct their ordinary work, while in another, they are expected to report to the facility and take direction from facility managers who have not been briefed. In other instances, CHWs are expected to assist with tracing people who may have been exposed to the virus, without training or protective gear.

The health minister must issue directives to provincial health departments providing standardised protocols for operations in relation to CHWs. These should include CHWs not entering homes without the appropriate protective gear. CHWs should not be required to perform tasks that will expose them to danger.

While some provinces have taken steps to absorb CHWs into provincial departments of health, this is not the case for all provinces. In the Western Cape, for example, CHWs continue to be employed through non-governmental organisations (NGOs). It is not clear what the procedures are for such CHWs to be mobilised for the Covid-19 response and what the role of the NGOs will be.

Urgent steps must be taken to ensure that CHWs employed through registered NGOs are afforded the same protection as that given to state-employed CHWs. This should include the assurance that, should they contract the virus, they will be able to receive compensation through the Compensation for Occupational Injuries and Diseases Act (COIDA). The minister must issue a directive to all health departments regarding the registration of CHWs for COIDA.

The protection of CHWs against criminal elements

The majority of CHWs are women. They face significant danger in the course of their work and the government must prioritise their safety. The army has been deployed to assist the police in maintaining law and order during this period. In some instances, CHWs may need security support when they venture into particularly densely populated areas and in areas where they will potentially be vulnerable to sexual violence and other criminal behaviour.

In addition, CHWs are at risk of being stigmatised by community members who are hostile towards people with Covid-19 infection. In the past week, CHWs deployed to conduct screenings in Nkomazi in Mpumalanga were attacked and harassed by distrustful community members. In response, the municipality had to “[s]wiftly intervene with police and reiterated our message through the community radio. There’s no such thing as health workers will infect people when they conduct screenings. These people are trained to assist the community. There’s only a questionnaire that will determine that one should go for testing”.

This shows that an extensive and ongoing education campaign in communities will be crucial to protect CHWs so that they are able to perform their duties.

The work of CHWs is stressful under normal circumstances. In light of the heightened risks the pandemic poses, they will be under even more emotional and physical stress. It is thus imperative that CHWs are provided with psycho-social support during this period and beyond.

As a crucial component of the healthcare system, and indeed to the Covid-19 response, CHWs must have access to the same support and protection that’s given to other healthcare providers. While this demand for the protection, training and equipping of CHWs is being made within the context of the pandemic, it also highlights pre-existing issues with the conditions under which CHWs work. These include not having security of employment, as they are continuously hired on fixed-term contracts and receive a meagre stipend (recently increased to R3,500 month through a bargaining council agreement, after years of fighting for standardised remuneration).

The ball is in the government’s court – what is going to be done about improving CHWs conditions of employment? DM/MC

Nontsikelelo Mpulo is the Head of Communications at SECTION27. Tendai Mafuma is a legal researcher in SECTION27’s Health Rights Programme.

*This article was produced for Spotlight – health journalism in the public interest. Like what you are reading? Sign up for our newsletter and stay informed.