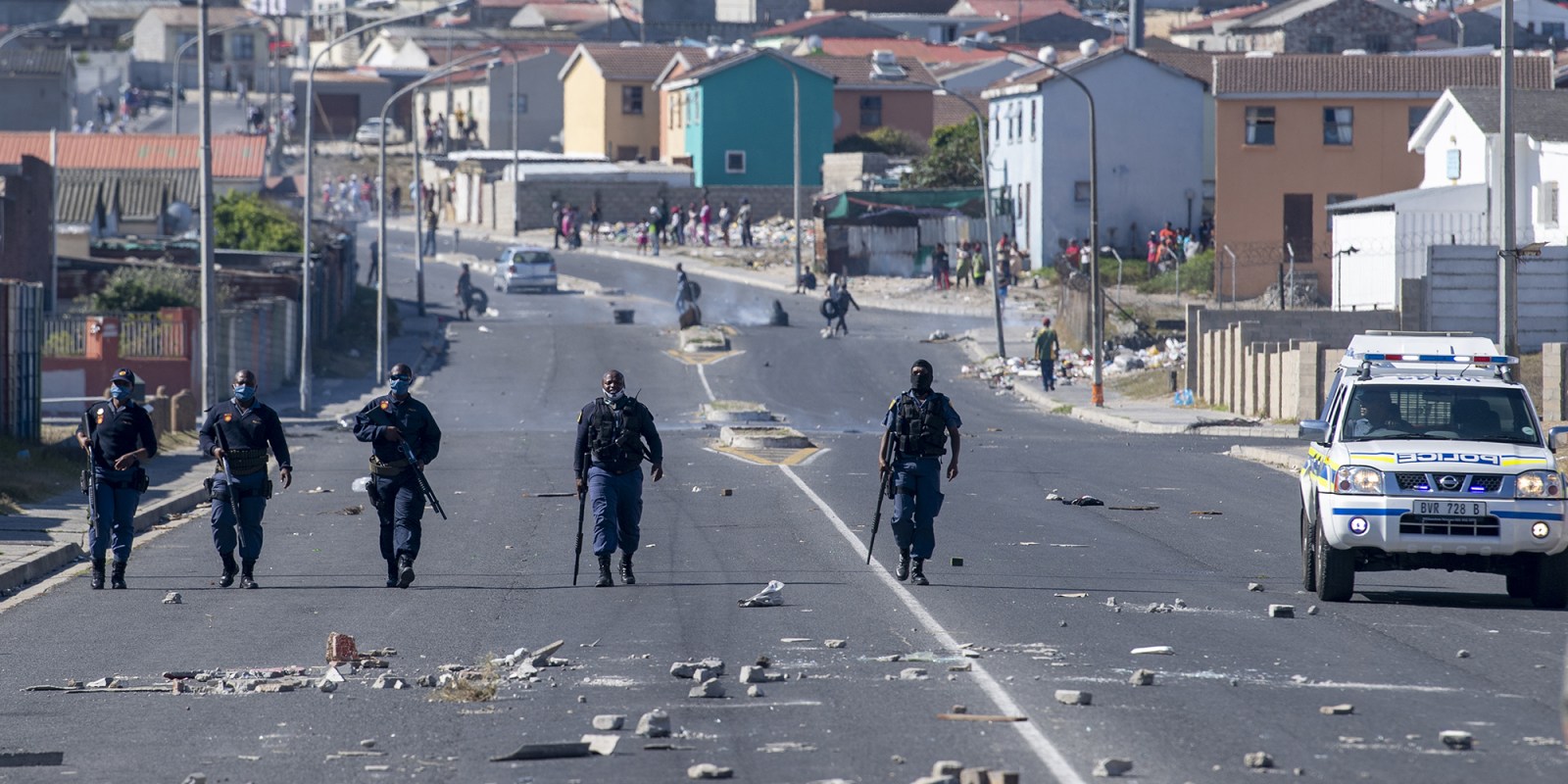 Residents in Mitchells Plain clash with police over food parcels on Day Nineteen of National Lockdown on April 14, 2020 in Cape Town, South Africa. According to media reports, police are on high alert after Mitchells Plain residents took to the streets and clashed with police over food parcels. Residents are furious with the social development department for not fulfilling its promise of delivering food parcels to them. (Photo: Gallo Images/Die Burger/Jaco Marais)

The party has also forbidden any food relief and other Covid-19 protection measures being branded in party colours and warned against the looting of food parcels.

Ahead of a Cabinet decision on a Marshall Plan to address mass hunger and the loss of a possible one million more jobs, the ANC has called for a minimum income grant for unemployed and informal sector workers as the Covid-19 economic pandemic begins to bite.

There is now mass hunger across the country as informal sector and other unpaid wage labourers have lost incomes for part of March and probably all of April.

For the first time, the ANC has supported a long-standing civil society call for a minimum income grant for the unemployed and for informal sector workers.

“…[T]he government must look at a minimum income support grant that covers those falling outside of social grants, particularly informal workers and the unemployed,” the party said in a statement after a National Working Committee meeting on Monday, April 20.

President Cyril Ramaphosa is also president of the governing party so an extended grant system could form part of a Cabinet plan to address an imploding economy and social distress.

The ANC met in a first-ever video conference National Working Committee meeting and while the party commended its government on how it has managed the Covid-19 outbreak thus far, it called for more muscular economic measures.

“Since the first confirmed case on 5 March, we have succeeded in restraining the rate of infection to about 4% a day, down from a daily doubling in March,” said the party.

For the first time, the party warned that South Africa is likely to experience a depression (a downturn much more serious than a recession), “with dire consequences for jobs, businesses and workers”.

The party said that existing proposals were too small – the first stimulus package announced was costed at R13-billion, when what is needed is likely to be R1-trillion.

“…[T]he meeting shared the concern expressed by President Cyril Ramaphosa that although these are measures in the right direction, constituting less than 0.1% of GDP, [it] is insufficient given the magnitude and intensity of the crisis we face.”

A civil society coalition on child grants has collected half a million signatures to support the increase of the child support grant by R500 a month, but sources told the Daily Maverick that the National Treasury was allegedly worried about how to make sure a temporary relief measure did not become a permanent cost. (See here.)

The call for a basic income grant has long been punted by civil society as a key method to bring relief to the poor who face unemployment that is likely to now afflict one in two working South Africans as well as inequality so grotesque it is the highest in the world.  But the ANC has, until now, resisted a national income grant for the unemployed.

How a minimum income grant will be funded is unclear as debt-to-GDP levels are at unprecedented peaks, with Eskom’s debt of R430-billion also sitting on the national balance sheet.

In an interview on Bruce Whitfield’s The Money Show on Radio 702 on Monday evening (April 20), the ANC’s Economic Transformation Committee chairperson said the party would not stand in the way of a loan or multiple loans from the IMF and the World Bank on condition that it did not infringe on South Africa’s sovereignty.

Weekend reports in City Press and this report in the Daily Maverick alleged that local councillors and other party apparatchiks have hoarded or cornered the food relief market for their own supporters. The party’s NWC said it “abhorred” these actions. It instructed its branches to investigate its members who had defied lockdown regulations, looted food and supplies and subverted procurement processes through corrupt practices.

“The ANC headquarters will monitor and provide weekly reports to the officials on immediate actions taken against these transgressors.”

The party also instructed that no protective clothing, masks and food parcels should be branded or distributed with ANC symbols. There is a cottage industry of the ANC using food parcels as tools of patronage, especially ahead of elections, and the party’s slick marketing machine brands anything that moves, but the party said: “The NWC condemns the partisan use of food parcels”. DM