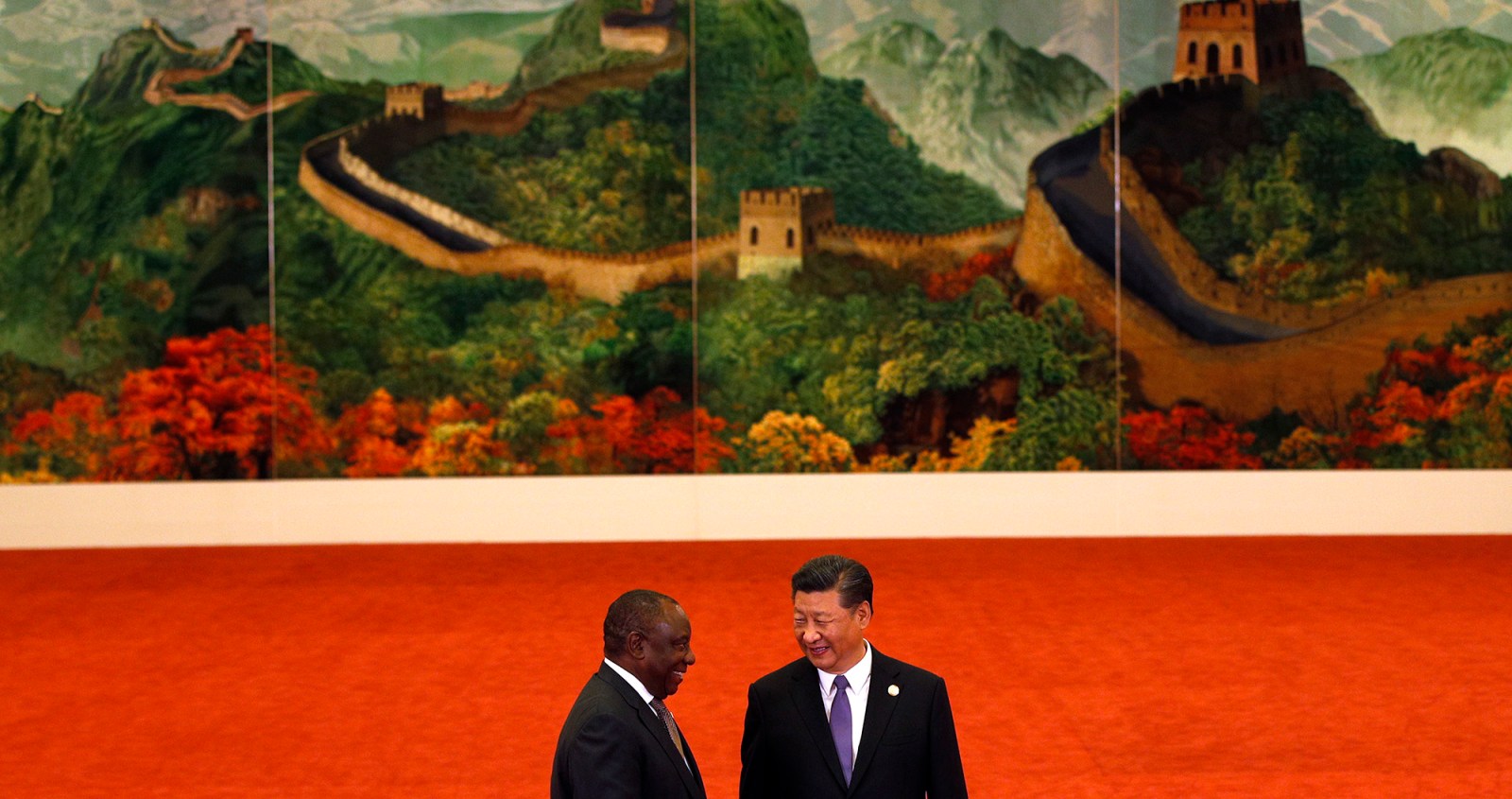 Chinese President Xi Jinping, right, chats with South African President Cyril Ramaphosa as they pose for photographers during the Forum on China-Africa Co-operation at the Great Hall of the People in Beijing in 2018. (Photo: EPA-EFE / Andy Wong / Pool)

South Africa, China’s leading trading partner and arguably closest ally in Africa, has been counting the economic impact of the coronavirus as experts warn that the outbreak will take a heavy toll on its economy. Perhaps this is an opportune time to rethink South Africa’s relationship with China more closely.

The ongoing racism against Africans in China’s southern city of Guangzhou is destroying the superficially successful Sino-African relations. The expulsion of Africans from hotels and their homes has caused a diplomatic storm. Trade relations between Africa and China have over the past two decades been marked by tremendous advancements in both trade and cultural exchanges. Conversely, the location of the city at the centre of Covid-19 in China and the emergency measures adopted in this country as well as travel restrictions across the world have affected global trade greatly.

China’s economy has been steadily slowing for years, but Covid-19 might just be the end of the country’s decade-long growth streak. Due to Africa’s close trade and economies with China, concerns have therefore been raised about African countries having to brace for the economic impact of a China slump as a result of Covid-19. Questions such as “how will African economies weather the impact of the coronavirus” have been raised. In typical Chinese fashion, as the Covid-19 crisis recedes at home, China is promising new support for African countries.

South Africa, China’s leading trading partner and arguably closest ally in Africa, has been counting the economic impact of coronavirus as experts warn that the outbreak will take a heavy toll on its economy. Perhaps this is an opportune time to rethink South Africa’s relationship with China more closely.

Since its Open-Door Policy in 1978, China has gone to great lengths through both investment and diplomacy, to partner with countries around the world, including African countries. The Chinese engagement in Africa has culminated in the much-talked-about Forum on China-Africa Co-operation (Focac) which began in 2000. Following its democratic dispensation in 1994, South Africa has forged partnerships as well as asserted itself on the global stage in order to deepen regional and international economic co-operation. In the past 25 years, China has emerged as one of the major and closest economic partners of South Africa. For instance, both countries are key members of  BRICS (Brazil, Russia, India, China, South Africa). South Africa joined this important bloc of emerging economies in December 2010, in line with the country’s foreign policy to strengthen South-South relations.

This year, 2020, marks 22 years of diplomatic and economic ties between South Africa and its Asian ally. The benefits of relations with China are noticeable in South Africa. Exports and imports between the two countries have soared to unprecedented levels over the years, earning China the position of South Africa’s largest trading partner for 10 consecutive years. By the same token, South Africa is now China’s largest trading partner in Africa. The economic co-operation between the two countries is multifaceted, ranging from trade to investment in infrastructure and loans.

With the Fourth Industrial Revolution unfolding, South Africa has to make intentional efforts to level the playing field with its Asian ally.

Investment from China had skyrocketed to about $25-billion in cumulative terms in 2018. Among the largest investors were Chinese automobile companies FAW and BAIC, tech giant Hisense and wind-power developer Longyuan Power Group Corp, and major commercial banks such as Construction Bank of China, Bank of China and Industrial and Commercial Bank of China, with the latter even becoming Standard Bank’s major stakeholder.

Private firms in China are also investing in different sectors in South Africa. For instance, Hisense has invested at least $32.5-million in South Africa, creating more than 650 jobs in the process. The company has also expressed interest in expanding production to cellphone manufacturing in 2020. Similarly, Beijing Automotive Industry Holding Co (BAIC), one of China’s largest automakers in terms of sales, has invested $773-million in a joint venture with the Industrial Development Corporation at its new manufacturing base in South Africa. Through a joint effort, the companies plan to invest $316-million and $457-million in phase I and phase II respectively. Since its establishment in 2018, the company has estimated a production of 100,000 cars a year and has created 10,600 job opportunities.

In 2013, Beijing announced its ambitious Belt and Road Initiative (BRI) aiming infrastructural development and promoting connectivity between countries around the globe. South Africa like other countries has signed on to this ambitious initiative and hopes to enjoy its ripple effects. The general perception is that many industries and physical infrastructure will be built along the BRI route and may potentially help the African continent realise Agenda 2063 as well as the efficient implementation of the newly signed African Continental Free Trade Agreement (AfCFTA).

Agenda 2063 and the AfCFTA have a great potential of accelerating intra-African trade and boosting Africa’s trading position in the international market by strengthening Africa’s common voice and policy space in global trade negotiations. South Africa, as the most industrialised and advanced economy in Africa, stands to benefit greatly if it is able to leverage its strategic position in Africa as well as its external relations with China.

Since joining BRICS in 2010, a collaboration between five emerging economies with combined GDP value of $15-trillion, South Africa has been perceived as a game-changer in Africa’s economic engagement with China. China has lent large sums of money to both government and parastatals. For instance, Eskom and Transnet have secured state-guaranteed loans to the tune of R7-billion ($481-million) and R4-billion ($300-million) respectively. The first $2.5-billion tranche to Eskom was, however, subsequently withheld due to looming worries about the completion of the Medupi and Kusile power plants.

Another concern relates to the government falling victim to liquidity traps. China has lent around R1.081-billion ($67-million) to South Africa. A “growth stimulus” of R370-billion with unknown terms has also raised controversy from opposition parties. South Africa’s reliance on Chinese automobile, electronic and other technological industries may hinder the establishment and growth of similar industries and innovation locally. With China’s large footprint within the country and little industry protection from the state. South Africa may miss out on an opportunity to industrialise locally, boost economic growth and create jobs for the youth and graduates.

The current power imbalance between South Africa and China thus poses a principal-agent dilemma, where the former is an agent and the latter a principal. Fears of China deliberately giving out loans in the hope of countries defaulting in order to seize assets has however been disproved by its withholding of funds from Eskom, upon fears the money would be used for daily operations instead of infrastructure development. While China may seem to be acting in good faith, this does not mean our relationship with China poses no long-term bearing on South Africa.

With the Fourth Industrial Revolution unfolding, South Africa has to make intentional efforts to level the playing field with its Asian ally. With both countries being part of BRICS, South Africa can use its closeness to China to ensure equal benefits. This can happen by easing travel restrictions between the two countries, which will bolster tourism and hospitality, establishing refinement industries to help add value to the raw resources it exports, intensifying skills-transfer agreements to ensure South Africa can establish its own self-sustainable industries in future, investing in robotics and technical skills, and developing a stronger manufacturing sector.

Since 2013, when Agenda 2063 was adopted, African elite businesses and political leaders have revived debates on how to solve the continent’s many challenges — such as poverty and inequality. Thus, against the backdrop of the revived interest in the continent’s resources by the superpowers, African countries, particularly South Africa, must direct the new scramble for their resources with both African leaders and citizens playing their cards right. In order to boost investment and create jobs through its relationship with China, the government of South Africa must be creatively assertive while negotiating a careful balancing act, dodging the manoeuvres of a rapidly rising global superpower as the balance of power tips in favour of China.

South Africa could equally leverage the AfCFTA as a key strategy to make the most of Africa’s moment through influencing a combined bloc of 54 nations, 1.2-billion people and a $3-trillion market to its favour. How this plays out on the continent domestically will be equally interesting as South Africa’s pole, and often pompous economic and political position on the continent, is no longer guaranteed.

The government will have to aim to be more collaborative and less exceptional in its relations with other African countries, especially as the Covid-19 pandemic has shown that African countries have to trade more among themselves as they ultimately pursue self-reliance. DM

Molebogeng Meela Monyamane is a South African professional teacher based in Beijing, China. She holds a BA (Hons) degree in Economics from the University of Witwatersrand in Johannesburg, South Africa. Mickey Adney, a scholar at the Research Institute of Law at Wuhan University, contributed to the writing of this article.