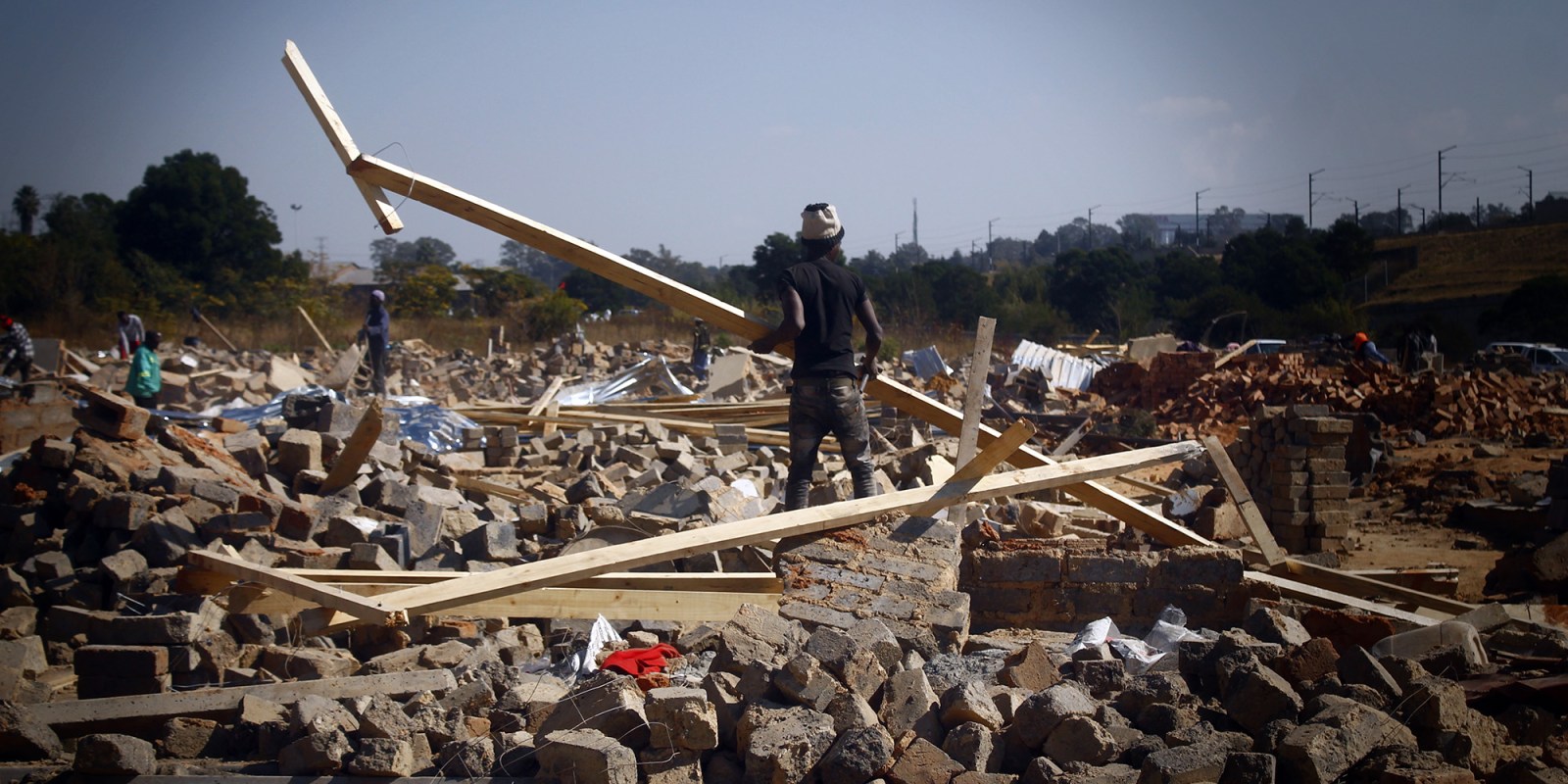 This is a summary of the trending, highest impact, and most active themes and narratives related to social cohesion in South African public-domain social media conversations on 19 April 2020.

This theme of conversation has grown in size and depth since the first forced removals last week and was now being fuelled by reports of new evictions in other provinces.

Lockdown regulations state: “no person may be evicted from their place of residence, regardless of whether it is informal, for the duration of the lockdown”.

On 16 April, the Red Ants demolished about 20 shacks in Kokotela, near Ennerdale in Gauteng, in apparent contravention of Section 11 CA of the regulations.

On 18 April Gauteng MEC Lebogang Maile said no further evictions would take place and the shacks demolished by the Red Ants in Kokotela would be rebuilt. He warned that criminals who took advantage of the lockdown to occupy land would be dealt with.

He commended authorities who carried out the demolitions, saying quick action was needed against criminals invading land illegally:  “As we speak now, that illegal activity is taking place. We can’t say, because it is a lockdown and we are dealing with Covid-19, we are going to allow people to do that”.

Maile applauded the City of Johannesburg’s disaster management teams and NGOs for assisting the displaced families by providing food and mattresses.

The widely shared visuals of Kokotela residents protesting against the demolitions has sparked shock, dismay and outrage on social media.

Many highlighted Section 11CA of the lockdown regulations being blatantly violated by the government. Others questioned how the Red Ants were allowed to operate during this time and whether social distancing rules did not apply to them.

People shared highly emotional, heart-breaking footage of residents who had lost everything in the demolitions and were now taking to the streets to protest.

“Red Ants”  was the top trending topic for 19 April.

Widespread sharing of official testing and infection statistics ensured the continuation of this theme of conversation.

Reports and anecdotes of specific incidents are fuelling engagement from new authors and growing the conversation.

Chriselda Lewis from SABC news tweeted the government’s press release at 7.19 pm indicating that South Africa’s death toll had increased to 54, the number of infections to 3158 and the number of tests conducted to 114,711.

Minister of Health, @DrZweliMkhize posted the release at 7.36 pm and the post received over 1700 retweets, with more than 2000 people involved in the conversation about these numbers.

Rapport editor, Waldimar Pelser, says Prof Salim Abdool Karim admitted that some testing data got mixed up, casting doubt on how many people who had been screened were eventually tested positive. This was according to a tweet that @waldimar posted at 8.41a m. The link to the full article is for subscribers only, raising the question of whether responders had read the full article or not. One called on Rapport to place the article “in front of the paywall”.

At 9.30 am @ludidiVelani tweeted that he had spoken to supermarket cashiers from townships in Cape Town who had tested positive for coronavirus, but were sent back to work as they received no support from their companies or the Department of Health.

His post was retweeted over 1000 times. Responses showed photos of Shoprite employees not wearing masks or gloves, but the dates on which the pictures were taken cannot be viewed.

This raised the topic of how businesses should be safeguarding their employees. Some felt that the focus was to ensure that healthcare workers were safe and protected, but people working in other essential services like grocery shops were at the mercy of unscrupulous business owners.

SAFM news generated some conversation with an updated tweet at 6 pm that 66 patients and healthcare workers at St Augustine’s Hospital in Durban have tested positive for the virus, with four fatalities.

Influential business person @Magda_Wierzycka called on MPs to focus on boosting healthcare and testing capacity, instead of wasting time on pointless infringements. This was in response to a Woolworths letter advising that the sale of cooked food will be stopped.

Conversation in this theme is being strengthened by remarks from world leaders and fuelled by the sharing of inflammatory video content.

An article by News24 on Afrophobia in China was the 6th biggest post by reach.

A news 24 article posted to Twitter at 7.47 pm gained a lot of attention, with 299 retweets, sparking conversation around racism and xenophobia facing Africans living abroad, particularly in China.

A tweet by former DA leader Mmusi Maimane on 18 April continued to resurface throughout the day as twitter followers retweeted his call to President Cyril Ramaphosa to take action with a “continental level response to Afrophobia”.

#Chinamustfall trended throughout the day, and use of the hashtag peaked at midnight.

A video posted by @PanAfricology shows a Chinese woman outside a hospital who is unable to communicate in English. She is advising Africans who are waiting outside. This was posted as an example of the poor treatment of Africans in China because, from the voice on the video, it sounds like the Chinese woman is turning the Africans away. But @yoosufaa explained that the Chinese woman was actually saying that she did not understand the Africans, and she would go and look for her phone to translate.

There was a spike in conversation on China between 9 am, and 10 am as @ewnupdates tweeted that “Trump warns that China could face consequences over pandemic”. What US President Trump actually said was: “If they were knowingly responsible, certainly. If it was a mistake, a mistake is a mistake.”

In response to the Eyewitness News tweet, many conspiracy theories were posted, some claiming that US Presidential adviser Dr Anthony Fauci and Bill Gates were behind the whole disaster, others saying that they supported America, especially since news broke that Africans were poorly treated in China.

A tweet by @BryanDeanWright, who identifies himself as a former CIA Ops officer, was a big driver of conversation around how the US should investigate the origins of the virus and hold China accountable.

A video posted by @DJFReshSA of a police officer praying before heading out for duty is taking twitter by storm. The video has been viewed 150,000 times and retweeted over 4000 times. The video was the top post by both impact and reach.

Twitterati were thoroughly impressed with the officer’s dedication to his job and God. Many called for a promotion. Others joked insensitively about how criminals would be long gone by the time SAPS were done praying.

The story of a newlywed South African couple stranded in the Maldives for 21 days was the top news story of the day and the second largest post by impact.

The couple arrived in the Maldives on 22 March and found themselves stranded when SA closed its borders as part of the lockdown. The Maldives then went into lockdown, turning the couple’s one week honeymoon into a 21-day financial burden that has cost $750 a night.

The couple returned to SA on a privately chartered flight arranged by about 40 stranded South African and Mauritian residents at the cost of about $104,000.

The honeymooners are now in quarantine in South Africa.

On Sunday a news story gained traction that Afrikaans singer Steve Hofmeyr had requested a relief package offered to artists during the lockdown.

Social media quickly latched onto the issue as Hofmeyr is a vehement critic of the ANC. The EFF’s Mbuyiseni Ndlozi stated that funding Hofmeyr would be like “funding an anti-black project”  and suggested Hofmeyr get funding from De Klerk and Zille.

The story featured as the 3rd biggest news story of the day on 19 April. DM