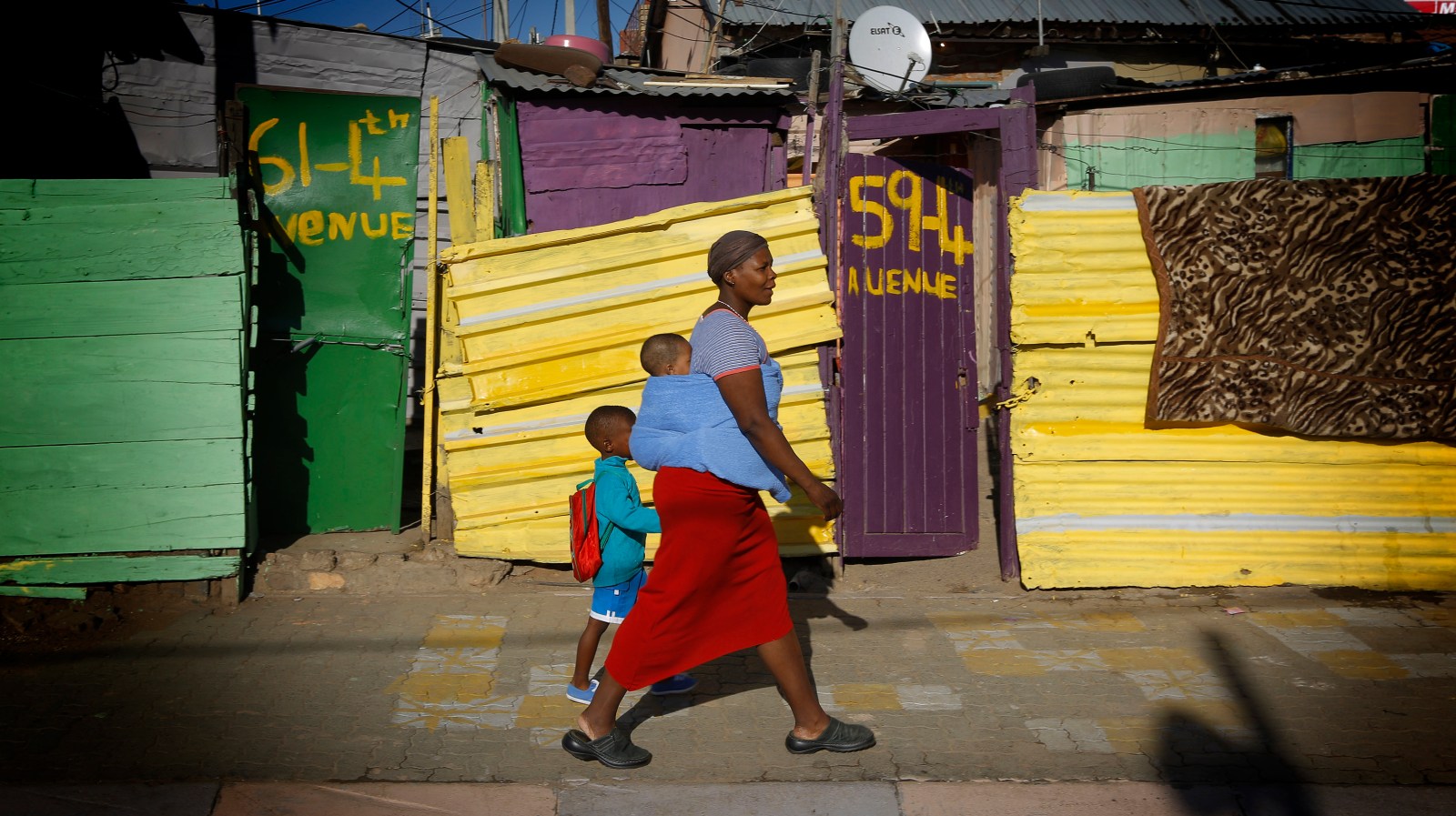 With the duration of the lockdown, pandemic and recovery unclear, it is essential for the government to support the call for an increase of R500 in the child support grant, say the writers. (Photo: EPA-EFE / Kim Ludbrook)

The Covid-19 pandemic will deepen existing glaring racial disparities among children. We know already that children’s access to resources varies dramatically by race.

More than a half a million people have supported the call to increase child support grants by R500 for a period of six months, made earlier in April by a group of concerned academics, civil society leaders and development partners. Child support grants (CSG) have been widely lauded for their effects in reducing poverty.

A range of studies attests to the educational and nutritional benefits. While applauding the critical role of CSGs in alleviating poverty in many households in South Africa, the modest benefits are insufficient to adequately meet the basic needs of the child even before the pandemic. Moreover, CSGs are often the only source of income in households as economic dependency is widespread in South Africa as a result of the persistence of unemployment and poverty. Covid-19 will worsen the existing vulnerable position of many children and households and the government needs to quickly increase the child support grant to prevent widespread hunger and despair.

In supporting the call made by others, this article illustrates who the beneficiaries of the increase will be and how it will help not only children, but the inevitable gendered and racialised care burden that will be carried by specific individuals and households.

Compared to other grants, the child support grant pays out a more modest R415 per month for 12.8 million children (almost two thirds of all children) until the age of 18. Almost all CSGs are paid to women, as women tend to be the primary caregivers of children.  To be eligible one has to be a primary caregiver of a child and earn not more than R4,000 a month if you are single or R8,000 a month if you are married. Since the lockdown there has been very little emergency relief to vulnerable households.

Recently economists highlighted that in the poorest half of the population, the CSG reaches 80% of individuals who are in informal worker households. Research carried out in 2017 examined the ways in which low-income working mothers (earning less than R4,000 a month) with young children (non-school going children, aged five or younger) in KwaZulu Natal use the CSG. Most of the mothers in the sample were working in the informal economy. The study found that while the CSG was helpful, it was insufficient to cover the most basic costs of children (including food, transport, creche, medicine, nappies).

Nokubonga, who is a single, 27-year-old mother living in Umlazi in a one-room shack with her one-year-old and five-year-old, four siblings and her parents described how she struggled to meet the costs of her children and often had to rely on support from her parents. She is a hairdresser and earns R2,500-R3,000 a month. She works informally to accommodate the caring needs of her children. She described how she used the CSG (in 2017):

For my little child I just make sure I buy good milk, cerelac porridge and fruit so that he is healthy. He eats solids now, so we include him in the household when we cook and stuff. I try stretch the money for much as I can. Yes, the money is a little, I mean what is R350 when a child has so many needs, but it is extremely useful in my situation where my income is little and I receive no support from the fathers or paternal kin. The grant money goes a long way indeed for me.

Despite the success of the CSG, the situation for children in the country is still dire. About one in two children (about 10 million) are poor and one in three children is below the food poverty line which means that they don’t get enough nutrition. The Covid-19 pandemic will deepen the existing glaring racial disparities among children. We know already that children’s access to resources varies dramatically by race.

There are far more black and coloured children living in poverty, compared with white children.  But the research also shows that children’s access to resources also varies widely by location. Research has shown that more than three quarters of children in Limpopo, Eastern Cape and KwaZulu-Natal are poor. Therefore, the impact of the pandemic will be felt most widely in the rural areas of the former homelands, where about 86% of children are below the poverty line by contrast with the urban child poverty rate at 51%.

These findings tell us that without any household relief, such as an increase in CSG, existing inequalities will be deepened by the impact of the coronavirus. Given the level of interdependency within and across poorer households, and in the absence of any other social grant (without the presence of an old-age or disability grant recipient in the household) in the household, the CSG may represent the only reliable income coming into many households.

The economists predict that for the bottom six deciles of household income, a 33% loss in per-person household income will be experienced as informal incomes collapse. The study on low-income working mothers’ experience of the CSG recently examined the changes in household income since the lockdown. Nokubonga explained that she has been battling financially — in fact, her whole family is struggling to meet basic needs. Her father, (a mechanic), her mother (cleaner) and herself (a hairstylist) all work in the informal economy and they all have no income.

The lockdown has put an end to everyone’s work. The CSG is the only state support in the household and the only source of income since the lockdown. They are struggling to buy food for three adults, two young children and four others including a 21-year-old male cousin who attends a TVET college and his 16-year-old sister and 14-year-old twins.

With almost one in three children (5.9 million children) living in households where no adults were working before the lockdown, it is unlikely that the situation will improve for the foreseeable future for many children.

Since the lockdown, almost all participants in the sample are struggling with the cost of food and most will run out long before the CSG payment next month. The sentiments expressed before the lockdown was that the CSG was helpful, but it had to be supplemented with an income to cover the costs of feeding children.

In the follow-up study in recent days, CSG beneficiaries were struggling to cover the cost of basic food. With the duration of the lockdown, pandemic and recovery unclear, it is essential for the government to support the call for an increase of R500 in the child support grant. DM

Nonzuzo Mbokazi is a PhD candidate and Elena Moore is an associate professor at the UCT Department of Sociology.