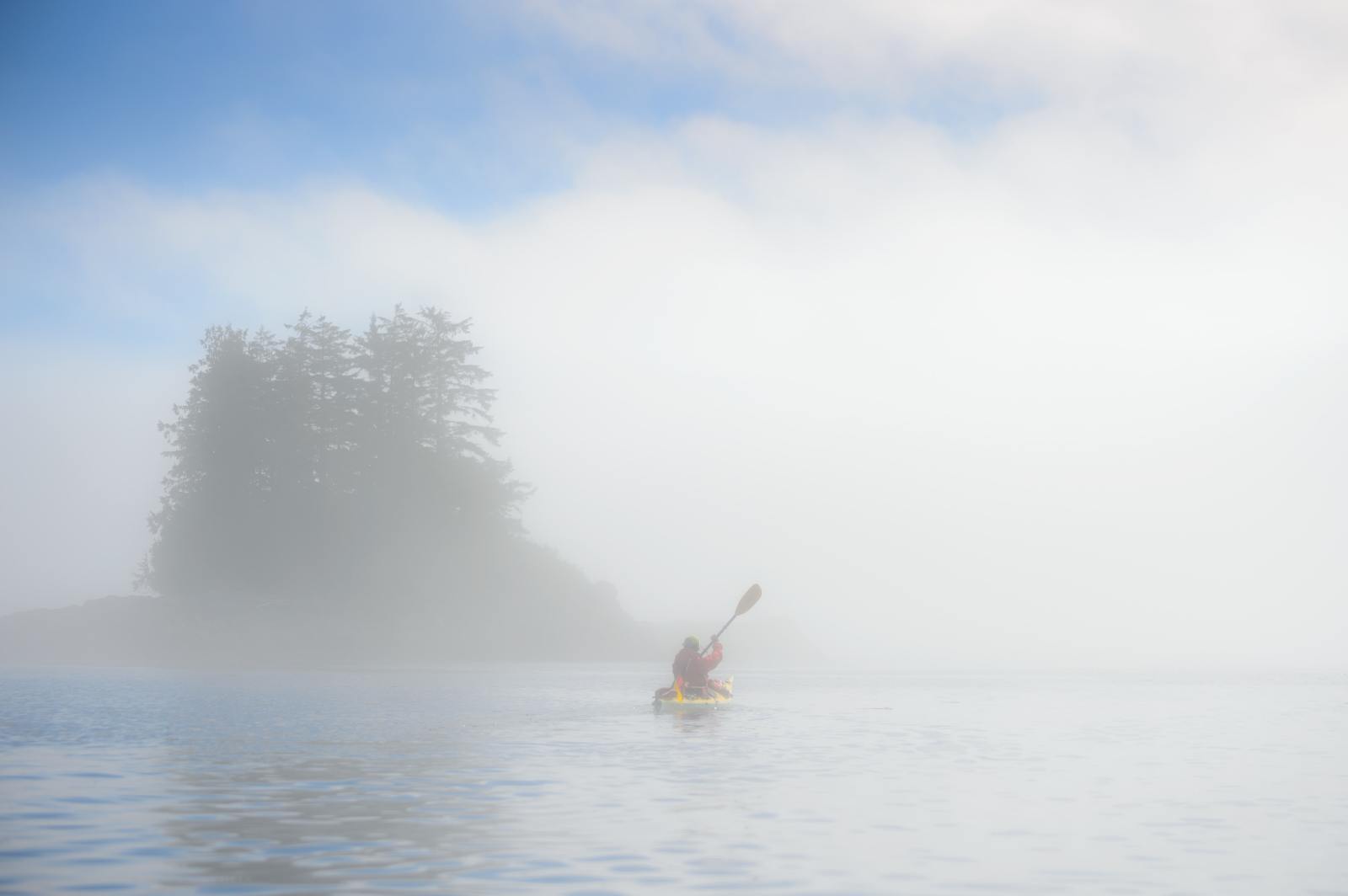 The Kowie River at Port Alfred has a mouth full of many smart houses, wrecked ships and some wistful dreams. But, as Don Pinnock discovered, there are older and wilder things up around the bend.

For some reason the word DANGER surrounded by a red triangle seemed to mark the boundary between the bonhomie of the boets and swaers of Port Alfred and the heart of darkness. The rain-bruised clouds added to the impression.

Maybe the mid-river sign was merely marking a hidden reef. But its presence had the same unsettling effect that “Here There Be Monsters” must have had on ancient mariners studying their hard-won maps. Some 180 years ago, when an ancestor of mine set sail for these shores, there were still maps carrying that warning. I eyed the danger sign, wondering about its portent, and paddled on.

Until that morning there had been others happy to kayak up the Kowie River with me. But the day had dawned wet and blustery. They quickly reversed their offers: “No way! Not in this weather…”, and went back to bed. So my trip up the river and into my own history would be alone.

There’s a backstory here which begins in Wiltshire, an English county. Probably in just such a drizzle, a man with my surname sat in a village in the English county and decided he’d had enough of the gloom, lousy pay and a declining demand for swineherds. He packed his family into a crowded immigrant ship in 1820 and headed for Africa.

Maybe he didn’t read the small print – maybe there wasn’t any – but conditions in the Eastern Cape where they landed were less than hospitable. The veld was bitter, there were animals which ate you and the Xhosa were understandably angry at the sudden invasion of pale, plough-toting abelungus.

It didn’t rain for two years. Then a flood took out the crops. My forebear gave up farming and moved to Grahamstown, where he bought an ox wagon and did transport riding. Every year, for generations – right up until my father’s childhood – the family would trundle down to the Kowie in the wagon and outspan along the river banks. From time to time the men would brave the monsters upriver at Waters Meeting where they’d hunt for the pot.

These days Waters Meeting is a nature reserve and the best way to get there is by kayak. Conditions there are still, well, Settler simple. There’s a hut, a water tank and some bunk beds. All about are wild hills where Afromontane forest meets subtropical valley bushveld amid symphonies of birdsong. Going there would have all the elements of pilgrimage.

The upriver reaches, when I went, were compelling, even though the weather map showed a 40% chance of rain with snow on the mountains. Anyway, venturing out in lousy weather ensures you have the world mostly to yourself. As long as you stay warm and dry, it’s a traveller’s bonus. Rivers Meeting – where I’d spend the night – and the spirit of my ancestors were calling.

Spirits of another sort had called a man named Derek who I met on the way back into town. He was pushing a huge, box-like contraption on bicycle wheels. It had a propeller on front and messages from Jesus all over it. He’d just bullied it all the way from East London a few hundred kilometres away.

I hired a kayak from Hutch’s Boats and a food basket from Butlers Riverside Restaurant. It looked way over the top, but I was in a hurry and stashed the boxes into the kayak’s storage compartments.

I paddled past the wreck of an old paddle steamer and through the Bay of Biscay (so named because the wind howls across it). Soon there was nothing but the lapping of water and the liquid piping of a black-headed oriole.

With some help from the paddles, the kayak rode the tidal surge past Cob Hole and I was soon at the ruin of an old mill.

“Would you like some frogs?” asked a man who was standing near it with a face to match the crumbling stonework.

“But you need frogs,” he insisted.

“Because fish love to eat them…”

“Well you should,” he threw back, then disappeared into the forest.

Soon after that rather surreal exchange a red danger triangle came into view. At a place named Fairy Glen the river turned westwards, narrowed suddenly and became more confidential. Riverine forest dominated by tree euphorbias covered the enclosing hills and, as I turned the bend, a pied kingfisher hovered invitingly. “Kwik kwik,” it insisted.

Beyond a sharp northward bend the river straightened. Several kilometres ahead was a towering wall of forested hillside. The valley rang with the cry of fish eagles.

At a spectacular 360-degree oxbow named Horseshoe Bend was a jetty and a sign which read “Waters Meeting Overnight Hut.” Joseph Conrad would have loved its mysterious invitation into the looming forest. There be dragons. Soon after hauling my gear and food boxes inside, the rest of the predicted 40% of rain descended. I dragged a rough table onto the stoep and unpacked the food.

The contents were so outrageous it was comical: lobster, prawns, meatballs, samoosas, Portuguese rolls with sausages buried inside, fish fingers, cheese, biscuits, apples, bananas, a chocolate cake, a flask of carrot soup, another of hot chocolate, and a bottle of Guardian Peak Cabernet Sauvignon with corkscrew, wine glass and checked tablecloth.

Among the goodies was a note which read: “Learn to pause or nothing worthwhile will catch up to you.” I spread the packages on the cloth, uncorked the wine and tucked in.

A jackal nickered then yipped, fireflies sparkled in the bush and the silence was made somehow deeper by the admonitions of a purple-crested lourie. A small, brown form glided down the path: could it have been the rare barred owl?

Raising my glass, I peered through the ruby wine at the gathering dusk. Just what was the spirit of my ancestors? Would I feel it? Would it manifest? Should I invoke it? It seemed a bit childish to call out: “Hey, spirits of my ancestors, I’m here.” But there was nobody around so I did it anyway.

Moments later a strange moaning began and I felt the hairs on the back of my neck bristling. What happened next nearly undid me. Round the corner, at speed, came a large male Chacma baboon. On seeing me a few metres away he let loose a deafening “baa-hooo” and skidded to a halt. At that moment, all the hadidas roosting around about went “haa-dee-da” together and I found myself standing on the table with the only weapon available – the corkscrew.

The baboon bounded off, the birds quietened down and in the absolute silence that followed I could hear my heart thumping like a tom-tom.

The rest of the night was quiet and the only visitor was a wily, larger-spotted civet, which arrived to polish off the rest of my prawns. Dawn was glorious, with rays of golden sunlight levering the remains of yesterday’s clouds out of the way. I packed up and set off downriver on a falling tide.

With three hours of paddling ahead, I had time for reflection. It struck me that I should, at least, consign to print this message to my descendants and anyone else who may be interested: Beware of invoking the spirit of your ancestors. You never know how far back they’ll appear from. DM/ML