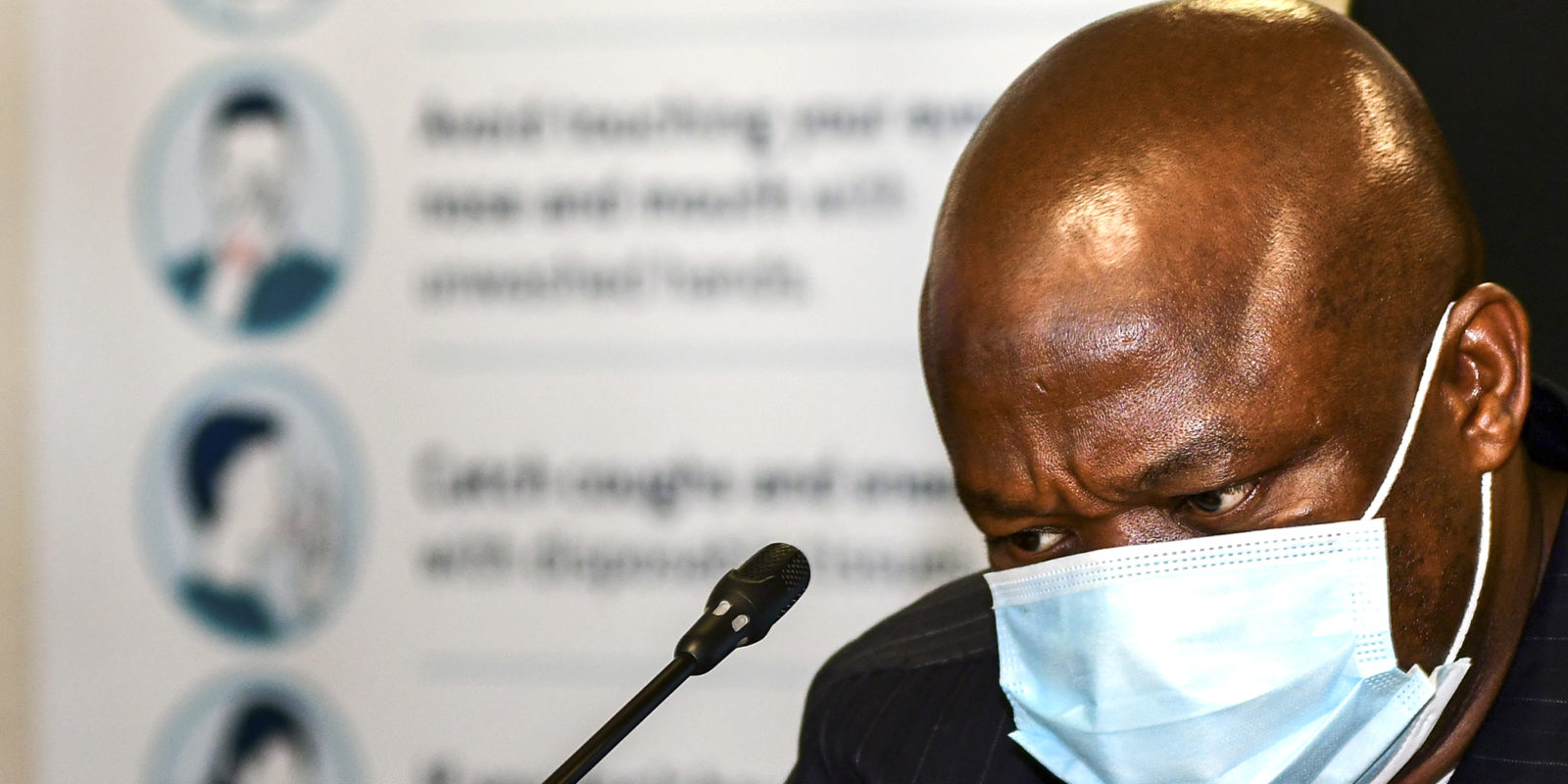 KwaZulu-Natal, provincial premier Sihle Zikalala, like political leaders across the world, is evidently hoping to find himself on what he believes will be the right side of history once the coronavirus pandemic subsides.

Premier of KwaZulu-Natal Sihle Zikalala has ordered greater enforcement of lockdown regulations, maximum penalties for transgressors, is halting Covid-19 positive individuals from self-isolating, and has asked the national government to provide the province with more security.

The provincial health department teams will now be provided with security details as they conduct large-scale door-to-door screening and testing operations in eThekwini. Residents found to be positive will be removed immediately from the community and returned once they test negative for the virus.

Zikalala told a media briefing in Durban on Sunday afternoon that the provincial government would be coming down hard on those contravening the country’s lockdown, now into its extended phase.

Covid-19 “hotspots” in the province would also be “locked down” to ensure screening and testing, and those not adhering to regulations would be subjected to “concomitant punishment”, he said.

According to figures released by Zikalala, 54% of the province’s current Covid-19 patients are self-isolating, but, he said, the practice would be halted.

Instead, as of Monday, newly diagnosed Covid-19 patients would be “taken” to government approved isolation sites for treatment because “there’s a leakage in the system in so far as self-isolation is concerned, in that those who are self-isolating, far from strict supervision, may interact with others and infect them”.

While responding to questions after the briefing, the province’s Health MEC, Nomagugu Simelane-Zulu, said patients who tested positive for the virus on Sunday had already started being moved to the government-approved facilities.

“The issue with self-isolation – we are saying it is coming to an end. Once we have discovered that you have tested, we take you, and that is the end. Up and until you recover, we [will then] release you back into the community,” Zikalala told the briefing.

“The infection is caused by those self-isolating, claiming to be self-isolating, roaming around interacting with families, which is why we are saying we are now targeting straight into ward [level], starting from the district and focusing on the individual.”

The target of the intensified lockdown would be in the “big townships as well as suburbs” of eThekwini District, he said, where violations would be met with “concomitant punishment”.

The eThekwini District accounted for 383 of all provincial cases by Sunday, while KZN itself had 587 positive cases of the virus as of Sunday afternoon.  Of this number, 61 were being treated in private facilities and 22 in public ones.

Fifty provincial patients had been discharged since the start of the pandemic, he said.

The worrying number for the Zikalala is the provincial death toll, which was sitting at 21 on Sunday afternoon. By Sunday night, another death had been recorded in the province, according to figures released by the National Institute of Communicable Diseases.

The majority of the deaths in KwaZulu-Natal, said Zikalala during the question and answer session after the briefing, emerged “from one centre – one institution. Painful as such, it means there was just irresponsibility…some level of negligence at some level of those at the centre. And that is why we have said an investigation must be conducted to deal with that centre”.

Zikalala was referring to the St Augustine’s private hospital, currently closed and undergoing intensive cleaning after dozens of staff and patients tested positive for the virus earlier this month.

The hospital’s dialysis centre – situated on the hospital campus but apart from the main building – had to continue operating because of a shortage of dialysis facilities in the province.

However, seven people tested positive for the virus at the centre on Wednesday last week, said Simelane-Zulu, and the hospital had subsequently been “given a week to say what they are going to do with these patients and [where they will take them]. They need to test all of them at this point and indicate how many [other cases there are], other than the seven that we know are already positive”.

She said government had been assured by the Netcare group, which owns St Augustine’s, that “cross-contamination” from the main hospital building to the dialysis centre would not take place.

All of the above had obviously led the province’s leaders to decide there was a need for “stricter intervention”, according to Zikalala.

Identified hotspots, such as eThekwini, would be the focus of screening, testing and harsher enforcement, said the premier. Zikalala would not name other hotspots, instead saying every township and suburb was needing attention.

The young appeared to be particularly nonchalant about the virus, he said.

Enforcing the lockdown would be SAPS, Metro Police, the SANDF and the provincial departments of transport and health.

To “vigorously ensure compliance” with the Disaster Management Act, the following would be intensified and enforced: Roadblocks, vehicle checkpoints and checking the movement of those at “high commuter areas”.

Intensified door-to-door screening would also take place, he said, as would screening at areas of high density, such as taxi ranks and malls.

Sanitation programmes would start at informal settlements from Tuesday.

Intent on adding just the right amount of gravitas as he continued his briefing,  Zikalala peppered his statements with ANC and battle rhetoric.

There was an “army” of 565 community screening and testing teams, amounting to 1130 “cadres” on the ground throughout the province.  The “army” would be increased as more citizens were enrolled and trained, he said.

“Besides the volunteers, the 10 488 community caregivers are going to be part of the teams as they go through different parts of the province.

“We are confident that through our deployment of these battle-ready troops, we will ultimately make a significant dent in our quest to flatten the curve of new infections.”

The province was at risk of losing the “battle” against the virus should the “urgent and decisive actions” not be taken, he said.

“Serious action” would be instituted against those contravening the intensified lockdown.

Simelane-Zulu said that once the newly positive Covid-19 patients had been moved to the approved facilities, her department would “look at those who have been self-isolating”, and those not adhering to isolation would be “taken to facilities”.

“We have very serious and unexpected experiences in various areas where those self-isolating are being seen moving around and going to the malls and having some engagement,” she said.

Those who were able to self isolate or quarantine had at first been encouraged to do so, she said, however: “Our lived experience, especially in eThekwini, [is that] we have found that the majority of them will defy these protocols and not adhere to them.

“That is why we are saying because these are guidelines it is not actually the law, they guide us to act in a particular fashion, and we are saying lived experience speaks against self-isolation. That is why we have decided to isolate everyone who has tested positive.

“The reason why we think we need to do that is because when you look at eThekwini as a metro, this is the economic hub of the province of KZN, and unless we deal with the provinces in eThekwini, it means the whole province will continue to have infections.”

KZN health department spokesman Agiza Hlongwane on Monday told Daily Maverick that halting self-isolation was a “principled decision” with the intention being to “err on the side of caution”. He said the increasing spread of the virus in eThekwini would have been pivotal to guiding the decision.

On analysing the data presented at the Sunday briefing, it is clear that eThekwini is the provincial hotspot for Covid-19, as Zikalala stated.

But in isolation, eThekwini has a reading 10.4 – more than two times higher than any other district in the province.

The nearest two districts were uMgungundlovu, where the provincial capital of Pietermaritzburg is situated, and Ilembe, home to the holiday town of Ballito, at 4.2 and 3.9 respectively.

Simelane-Zulu said investigations into the outbreaks at St Augustine’s and Kingsway hospital, in Amanzimtoti, where staff had also been infected, were continuing. Kingsway was temporarily closed last week; it too is owned by the Netcare group.

“Is not necessary for us to rush this particular investigation. For us to get a credible outcome, we need to give the process an opportunity to run itself properly. At this point, there is no report as yet. But as soon as we do get it, we will indicate so, and it will also need to go to [health minister Zweli Mkhize].

Zikalala said a provincial health department team was established last week to “visit all private hospitals that we have in the province” to conduct testing and “look at whether they are adhering to protocols, where they need support and where must we put our foot down as a department”.

The team had started its monitoring in eThekwini, iLembe, uMgungundlovu and Ugu. Once those districts had been completed, the team would move to other areas.

“We decided to not to wait for cases to pile up and [instead to]actually go to these facilities and investigate. The majority of the hospitals we have visited are cooperating and working well together, but that doesn’t mean where action must be taken, we won’t take action,” he said. DM