The questions, published under the ATM’s official letterhead and widely shared on social media by party officials, spread the conspiracy theories far beyond the reach of the original rumours.

Several media houses reported uncritically on what was being claimed.

When politicians and online publications disseminate rumours they take them beyond the confines of the small social media ecosystems in which they originate.

Earlier in April, a false report claiming Bill Gates intended to test a coronavirus vaccine in Africa was amplified by News24, South Africa’s largest online publication. News24 was later forced to retract the piece and apologise to the Bill and Melinda Gates Foundation.

The ATM, a conservative Christian-based party founded in 2018, won two seats in South Africa’s 400-member Parliament after securing 0.44% of the national vote at the 2019 elections. It also has two provincial legislature seats in Eastern Cape and KwaZulu-Natal.

On 5 April, the party published a letter it had sent to the President urging him to convene a special meeting with party leaders to discuss several conspiracy theories. These included a claim that a well-publicised friendly tennis match involving Gates, comedian Trevor Noah and tennis pros Rafael Nadal and Roger Federer had been a “smokescreen event” to discuss the testing of Covid-19 vaccines in South Africa. 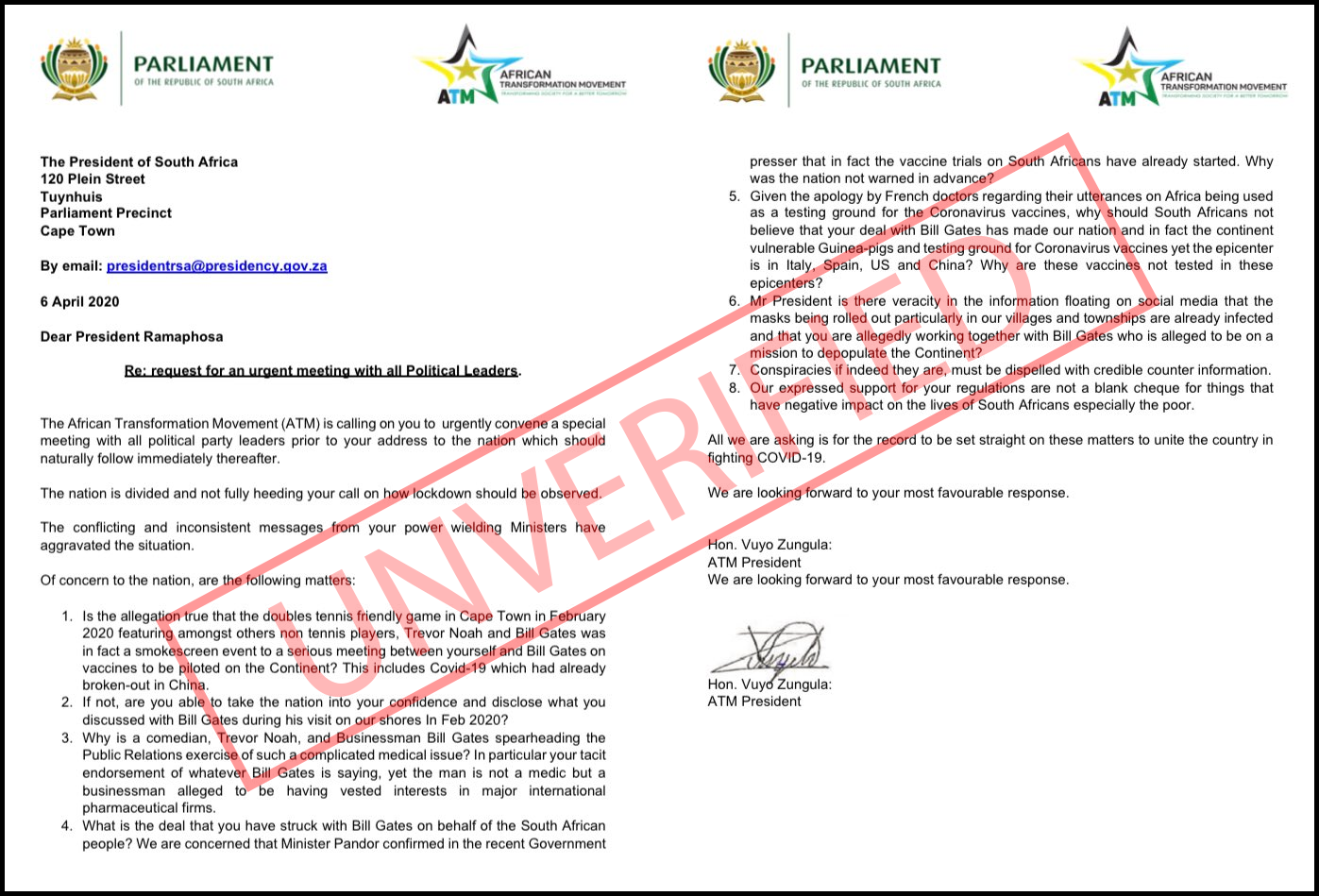 A screengrab of the letter containing the conspiracies as published by ATM. (Source:@ATMovement_SA/archive)

That rumour was particularly far-fetched: the exhibition match between Federer and Nadal took place on 7 February 2020 and was the sixth in a series of matches intended to raise funds for rural education programmes in South Africa. Gates and Noah were announced as guest participants on 4 July 2019, many months before the first case of coronavirus was reported.

The ATM letter also rehashed a ludicrous claim that Gates provided face masks to villages and townships infected with the new coronavirus in “a mission to depopulate the [African] continent”.

The ATM called on Ramaphosa to dispel these stories with “credible counter information” — despite not providing any evidence to support them in the first place.

Prior to the ATM’s posts, public discussion about the alleged tennis match conspiracy was extremely limited. Mentions in newspapers and blogs were largely confined to the sporting context.

On Twitter, the situation was slightly different. The DFRLab’s investigation identified 134 mentions relating to the alleged conspiracy between 1 April and 12 April 12 2020. These mentions coincided with an interview between Noah and Gates on 4 April.

A screengrab from a Meltwater Explore query looking at social media references of the Bill Gates tennis match conspiracy theory. Mentions of the topic, mostly on Twitter, peaked at 100 mentions on April 5, 2020. (Source: @jean_leroux/DFRLab via Explore)

The bulk of mentions was on 5 April and made the first connection between the exhibition tennis match and Noah’s interview with Gates. Several Twitter users “connected the dots” between Noah, Gates and the match in February. 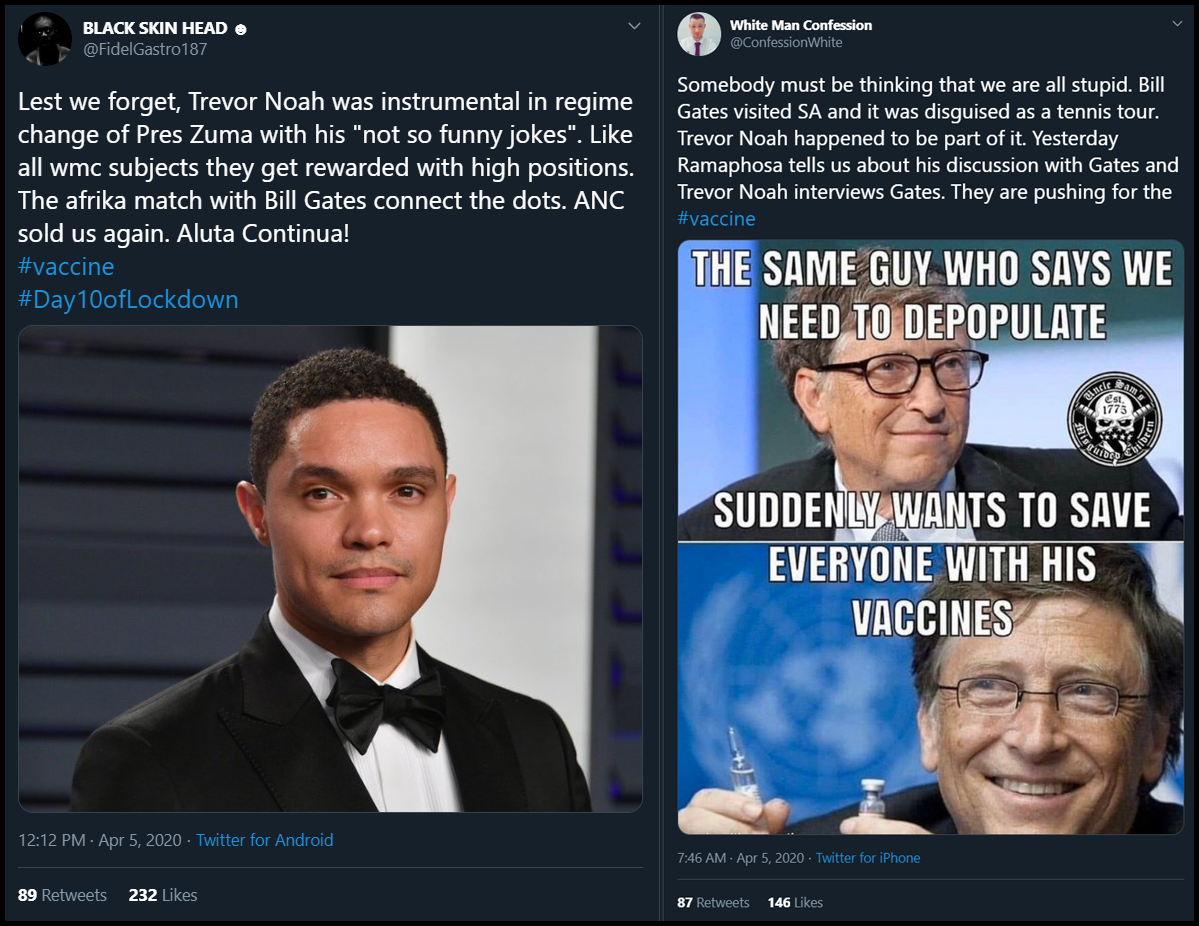 Screengrabs from the most popular tweets in the list of mentions of the topic on the day. Both of these tweets relied on a connection between the charity tennis match held in February and the distribution of a non-existent vaccine. (Source: @FidelGastro187/archive, left; @ConfessionWhite/archive, right)

Overall, organic discussion on this topic was limited and tapered off after 5 April.

The ATM published its letter to Ramaphosa on its Twitter and Facebook channels on 5 April at 7.03pm and 7.05pm local time. The letter was created using the ATM’s official stationery and featured a prominent logo of the South African Parliament.

The letter bore hallmarks of a publicity stunt: a formal process for submitting questions to the Presidency exists in Parliament but the ATM opted to forego this and make a public splash on social media. Manyi and party leader Vuyo Zungula retweeted and amplified the letter over the course of the next day.

Although direct mentions of the tennis match conspiracy were on the decline on social media at this stage, publication of the ATM letter and its amplification resulted in a large number of new mentions of it. These peaked at 952 mentions on 6 April and dropped off quickly afterwards.

A screengrab from a Meltwater Explore query looking at social media references of the questions directed to Ramaphosa by the ATM conspiracy theory.  Mentions of the topic, mostly on Twitter, peaked at 952 mentions on April 6th 2020. (Source: @jean_leroux/DFRLab via Explore)

The SABC, South Africa’s state broadcaster, was the first to run a story on the ATM’s request for an official rebuttal. The news item did not interrogate the content of the letter in any way and embedded a link to the ATM’s tweet.

Articles published by The Citizen and Briefly.co.za also failed to critically assess the claims or the embedded links. Only TheSouthAfrican.com made an effort to review what was being said.

Social media engagements for these articles — likes, shares, retweets and similar ways of interacting with a post — indicate that they received significantly high interaction across social platforms. These figures, however, underestimate the articles’ reach as they do not take into account readers that arrive at the article directly or via private messaging platforms such as WhatsApp. 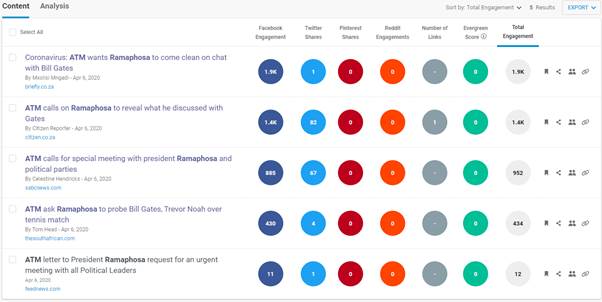 A Buzzsumo analysis indicating the engagement figures for the various articles referencing the ATM letter containing the conspiracy theories. The engagement values on these articles were significantly higher than the original tweets by the ATM. (Source: @jean_leroux/DFRLab via BuzzSumo)

What is clear is that publication of these articles resulted in a significantly wider audience being reached than that of the Twitter ecosystem in which the tennis-match conspiracy theory was hatched.

By publishing its letter and insisting on counter information being provided, the ATM gave a certain legitimacy to the false news that it would otherwise have lacked. And, by reporting uncritically on the political posturing, news platforms gave it an even greater audience. DM

Jean le Roux is a research associate with the Digital Forensic Research Lab and is based in South Africa.

This article was first published here