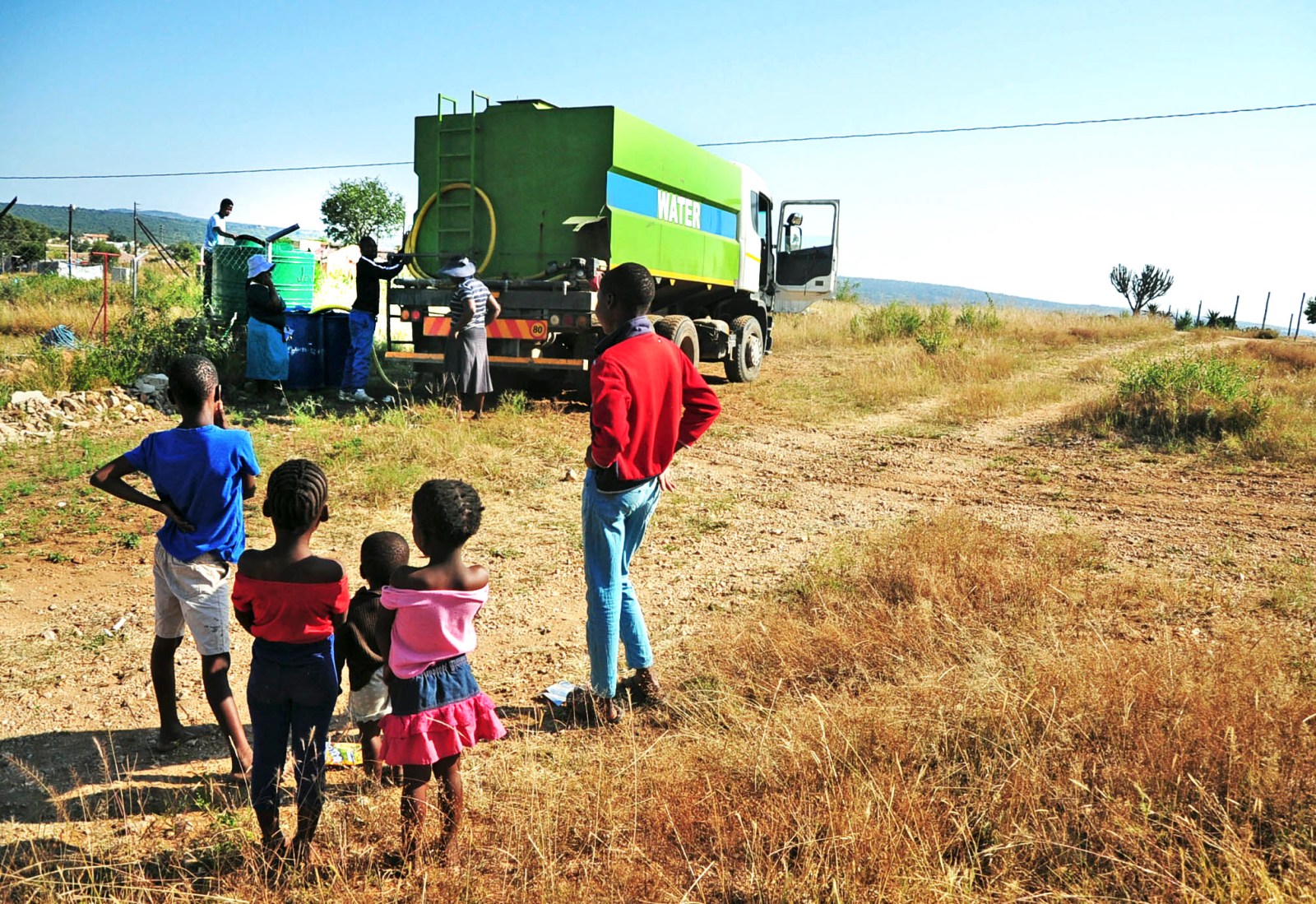 Children watch as a truck delivers water in Koppermyn section, GaMaja in Limpopo province. Government has announced plans to deliver water to communities which don't have access to running water during the Covid-19 lockdown. (Photo: Lucas Ledwaba / Mukurukuru Media)

This is a summary of the trending, highest impact, and most active themes and narratives related to social cohesion in South African public-domain social media conversations.

“Red ants” and “squatter camp outside Ennerdale” were the top trending topics on 16 April, with 100% burst.

This theme drove the spike in volume of conversation between 20:00 and 21:00.

News24 reported the anguish of Ennerdale residents who were forcefully removed by the Red Ants in Gauteng. The Johannesburg Metro Police maintained order while the demolitions took place.

Mentions on Ennerdale began from 16:00 and peaked at 17:00 following a video tweeted by @ntwaagae, which has been retweeted over 400 times.

The brick house demolished in one of the videos on news and social media belonged to France Botlhokwane. He had been renting a shack in Lawley until he was persuaded to buy the land for R3,000. He built the house for R150,000. His neighbour’s two-bedroom house was also demolished.

The City of Johannesburg ordered the Red Ants to demolish illegally constructed houses in Ennerdale, where residents are accused of invading the land.

This raised questions around whether the Red Ants were considered an essential service and should be allowed to operate during the lockdown.

The lockdown regulations prohibiting evictions are also being questioned. Many  saw the deployment of the Red Ants to demolish homes as hypocrisy, as government had given an assurance that there would be no evictions during the lockdown.

The topic peaked at 17:00  as several news sites began covering the story.

Many were in disbelief that the Red Ants were tearing down shelters at such a chaotic time for the country.

Some Twitter responses were aimed at the EFF, saying residents made bad decisions to build in the area based on empty promises by politicians. A debate between @Suenmoloi258  and @mothibisi expresses the opposing opinions on land grabbing.

Sentiment toward the topic “red ant” was neutral in 654 mentions, while the 4,197 mentions on the topic of “Minister” showed a “rather negative” sentiment.

The main question people raised was: where does an entire displaced community go to during a lockdown?

This has been a growing theme of conversation since the announcement of the lockdown extension and the slow roll-out of government assistance.

Reports and photos of the desperation of Ximausa residents in Limpopo drove the spike in  volume between 20:00 and 21:00 and was the top story of the day by Reach.

Conversation around the plight of residents in this area outside Giyani in Limpopo began just after 10:00, in response to a tweet posted by  @HitekaniMag. The tweet showed residents trying to dig for water in a dry river bed. More than 2,000 people engaged in the conversation.

@Machavojoni1 said the situation has prevailed for over 10 years and residents have been buying water from people with boreholes.

The conversation continued throughout the day, peaking at 18:00. The individual reach on this topic was far higher than organisational reach, implying that while citizens felt that their plight was important, news agencies did not give it as much attention as other news.

Reports of the new regulations giving control of water supplies to a National Disaster Water Command Center surfaced. The Command Centre will set up a  monitoring system to track the procurement and distribution of emergency water and sanitation to over 2,000 communities.

Quoting Mikhail Gorbachev, Minister of Water and Sanitation Lindiwe Sisulu tweeted that people needed to be economical with water and not waste it. Frustrated responders posted links to @HitekaniMag’s Ximausa photos and commented that some people don’t even have water, so how can they waste it?

Minister Sisulu’s tweets triggered a barrage of social media responses to highlight the plight of people without water.

@Fanie0404 highlighted a small town in North West, Jericho, which had not received running water since 1998. Despite all the infrastructure in place, the taps were dry.

Musina municipality in Limpopo has been promised water, and has been waiting since last year.

Many people called on government to provide water for hygiene and cooking during the lockdown.

In a widely shared tweet by @MissNthabeleng, Ms Likotsi called on the people of South Africa to unite like they did during Apartheid, “I hope this pandemic brings us together again, during Apartheid Black people shared their homes and food, no child went to bed hungry.”

Commentators are calling for people to support each other through these difficult times, instead of alienating from each other.

As the lockdown enters the extension period of two weeks, many will need to rely on the spirit of Ubuntu for survival.

Several corporations and celebrities are continuing to make donations and lend a hand.

Bonang Matheba, Somizi Mhlongo, Mohale Motaung, Black Coffee, Boity and more are rolling up their sleeves to help South Africans in need during the lockdown. Some are helping with donations to organisations and others are helping individual families.

Other Trends of the Day: 16 April

The Minister of Cooperative Governance and Traditional Affairs, Dr Nkosazana Dlamini-Zuma held a briefing to explain amendments to lockdown regulations. This drove a spike in volume of conversation between 11:00 and 12:00 and was the third most trending topic of the day, with a 94% burst.

Health Minister Dr Zweli Mkhize announced that infections had risen to 2,605 with 48 fatalities. Limpopo and Eastern Cape both recorded their first fatalities from Covid-19.

The minister said that the 903 recoveries so far were encouraging.

Former DA leader Mmusi Maimane tweeted, “Collectively we have contributed to a slower rate of infections. We must fight this fight till we have zero infections. That has to be our collective goal.”

People across social media noted the lockdown has slowed down infection rates. DM

All reports are available at www.cabc.org.za. The Centre for Analytics and Behavioural Change (CABC) is a non-profit organisation incubated at the Graduate School of Business at the University of Cape Town.