Hunger stalks virus-ridden streets from SA to the USA 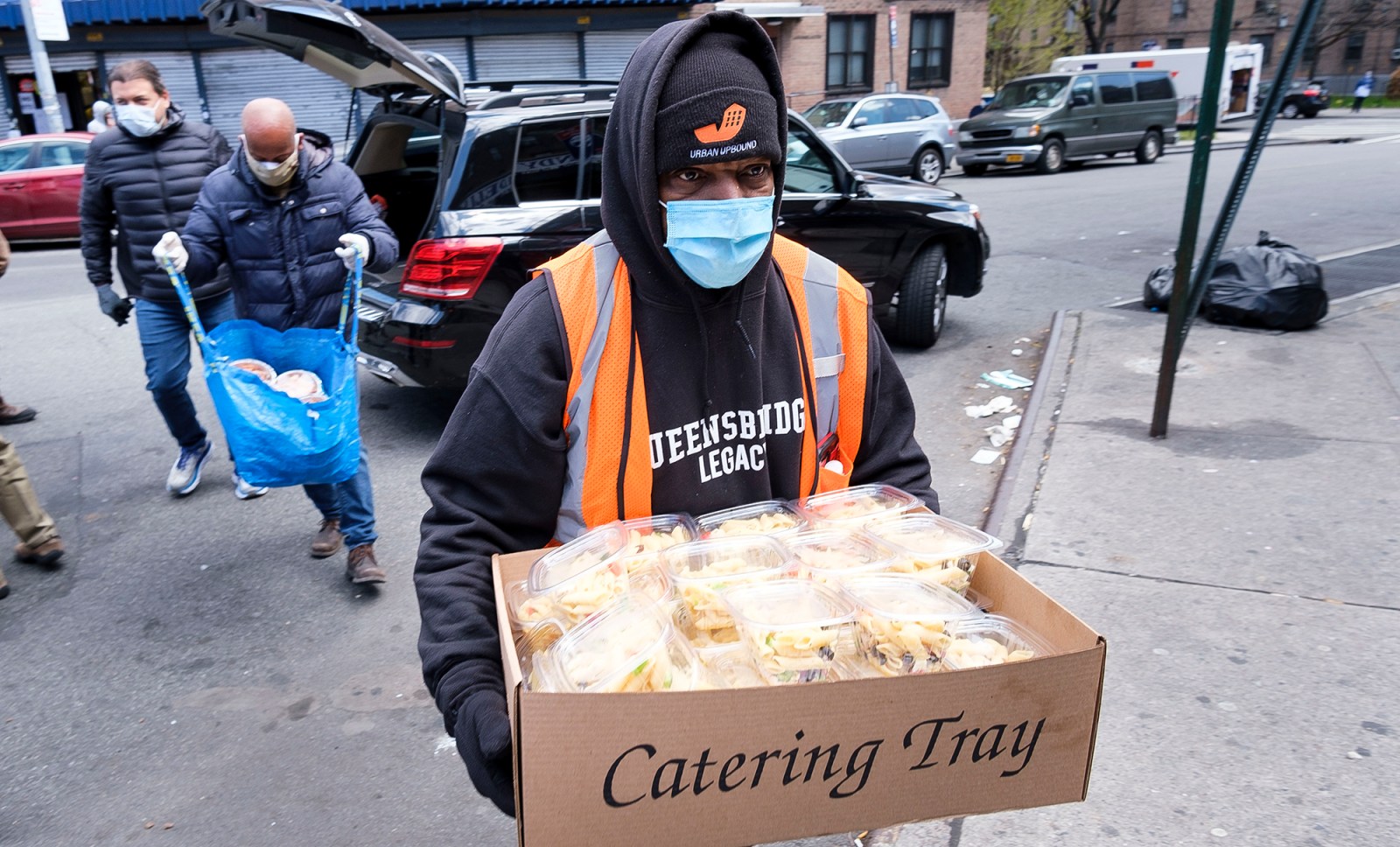 A volunteer carries meals into a food distribution location put together by the organization Urban Upbound for people in need at the Queensbridge Housing complex in Queens, New York, USA, on 16 April 2020. More and more people are feeling the economic effects of efforts to contain the coronavirus pandemic and the unemployment rate in the United States is rising by millions of people each week; aid organizations are bracing themselves for a spike in the number of people who will need assistance. (Photo: EPA-EFE/JUSTIN LANE)

Food banks around the US are reporting increases of up to 500% in the number of people being supplied with food since the first Covid-19 infections were reported in that country.

While South Africa increasingly seems on the verge of food riots, and is experiencing what could be just the first round of hunger-fueled looting as people are unable to work during the lockdown, one of the world’s superpowers is battling to distribute much-needed food. The US is facing severe supply chain disruptions with food industry workers contracting Covid-19 as the pandemic continues unchecked.

American labour unions and food industry experts are warning that the country may have to brace for food shortages as workers fall sick and bulk or panic buying by consumers continues. Globally, food industry experts and suppliers have been saying that there is enough food – but it is the hoarding of groceries that’s causing supply chain issues as people everywhere buy more food, as well as household and sanitary items, than they did in pre-pandemic times. Store shelves are often empty of flour, eggs and other staples as they get snatched faster than ever.

This means that normal supply and demand relationships have been thrown out of balance and suppliers are unable to replenish shelves fast enough, due to an often 100% increase in demand, especially for goods like toilet paper and dried foods like rice and beans. Consumer behaviour has been the main cause of strain on the supply chain until this weekend, when the virus started making its presence felt in the food industry itself.

On Sunday, Smithfield Foods shut down its processing plant in South Dakota after more than 200 of its 3,700 workers fell ill with coronavirus. Smithfield provides more than 5% of the pork consumed by Americans, and is the world’s largest pork processor.

Smithfield’s shutdown, along with other meat industry plants like the Tyson Foods plant in Iowa which closed on Wednesday after 189 workers tested positive for coronavirus, means the meat industry is on the brink of stalling in the US. Tyson and Smithfield are also among the largest poultry producers in the US.

The dairy industry is struggling and has already approached the US government for help. Demoralising pictures of milk dumping of possibly more than 12 million litres a day have emerged over the past few weeks. Dairy farmers cannot simply stop milking cows, but with the closure of schools, restaurants and coffee shops, there is no market.

This means that the industry, which was expecting an upswing in 2020 after four lean years, is on the brink of going bust. Some processing companies are giving milk away to food banks and charities, but these organisations, while grateful, have capacity issues with storage and refrigeration. Dairies have approached the US Department of Agriculture for assistance in the form of financial compensation, or even to buy their products and donate it to food banks around the country.

Florida farmers are destroying a glut of vegetables by either literally mowing them down or letting them rot in the fields. The shutdown of the hospitality industry means that tons of fresh produce have nowhere to go as restaurants and hotels are closed and cruise liners are docked. Some struggling farmers say they cannot afford to harvest, as it means paying workers to harvest crops they cannot sell.

At the other end of the scale are hungry Americans who cannot afford to buy groceries after having been out of work for three weeks, and even longer depending on which state they find themselves in. Some 300 million people are under stay at home orders.

In 2019, www.feedingamerica.org said more than 37 million Americans, 11 million of whom are children, struggled with hunger. The pandemic has grown this number with food banks around the country reporting increases of up to 500% in the number of those being supplied with food.

While much has been written about nurses, doctors and health care workers in the frontlines of the pandemic, there is a growing realisation that other essential workers, such as those in food and retail industries, are also facing considerable risk of contracting the virus. In the case of workers at the plants mentioned above, their working conditions mean they often work in close proximity to each other, which makes it easy for the virus to spread within the plants.

Also on the frontline are grocery store employees who come face to face with often contrarian and ignorant shoppers who either do not take the pandemic seriously or are simply insensitive. Unions say that many grocery store employees are afraid to go to work and either call in sick or simply stay away. Some employees have reported issues with masks and protective items like gloves, with stores being accused of either not providing PPE to their staff or ordering it, and then having the stocks diverted to hospitals and healthcare workers. ( Grocery stores struggle to equip workers with face masks.)

The United  Food and Commercial Workers International Union (www.ufcw.org), which represents over 900,000 grocery store workers, announced on Monday that 30 of its members had died from Covid-19. The union also said a survey of 5,000 of its members indicated that shoppers did not practice physcial distancing, thereby putting workers at risk. Store owners and management add to the problem by failing to ensure that customers practice physical distancing inside the stores.

At the end of March the United Nations warned of global food shortages based on logistics and issues around food production, transportation including movement across borders, and the availability of workers due to either ill-health or lockdown/stay-at-home orders.

There is enough food, but accessing it is potentially going to be as big a problem as containing the virus. The world is taking strain and the worst is still to come as food insecurity looks set to become a mounting crisis for everyone. DM