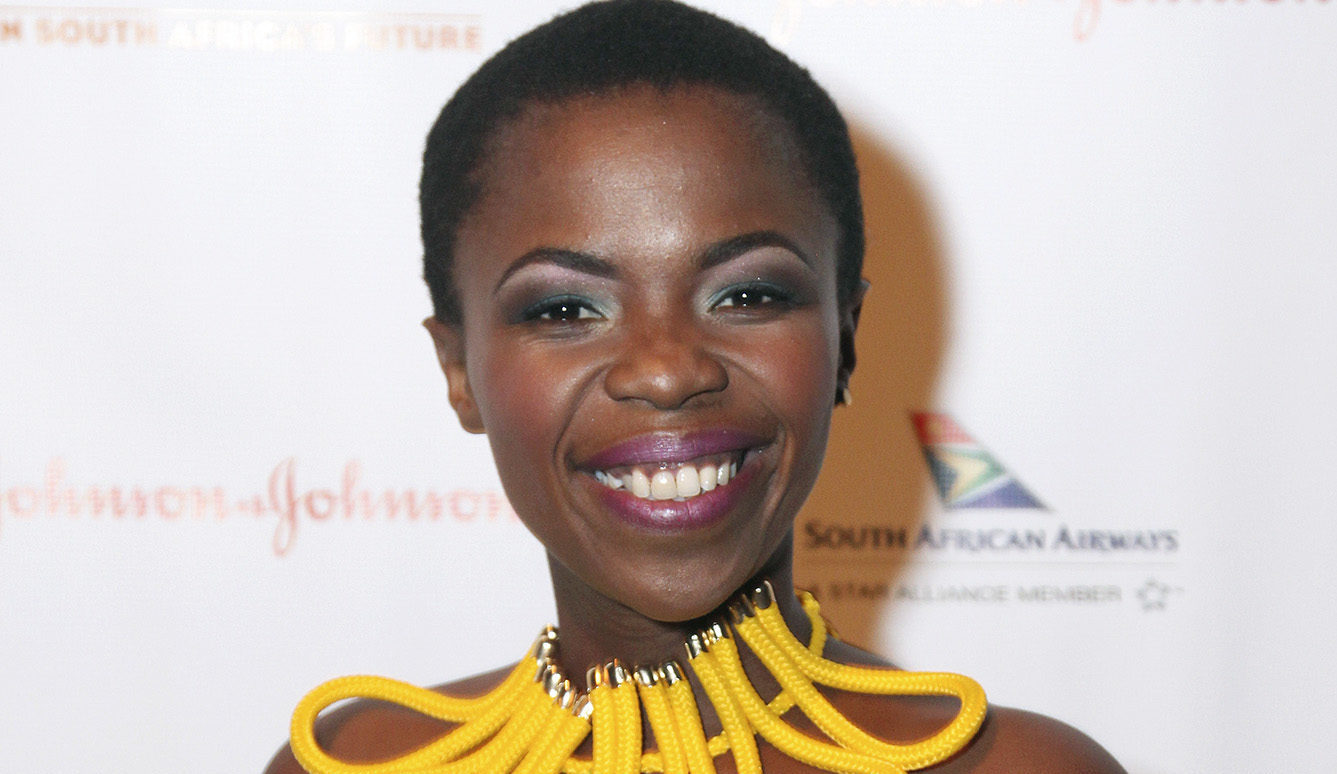 Singer and actress Zolani Mahola was catapulted to fame as the lead singer of pioneering South African band Freshlyground. At the 2010 Fifa World Cup, she shared a stage with Shakira as they performed the event’s theme-song Waka Waka.

At the height of Freshlyground’s fame, Zolani Mahola represented the sparks of hope of a young democracy, while inside her a deep darkness grew. Now, 10 years later, as Mahola lays down her Freshlyground mantle to focus on a solo career, she is finally ready to speak about the pain that shaped her journey – often threatening to derail it. The 38-year-old musician is hesitant to use the term “motivational speaker”. But a part of her focus now will be on telling stories, including her own.

“A big part of it is the external versus the internal story,” she says. “So I will talk about the success of the band. I will talk about singing with Stevie Wonder, singing with Shakira and opening for Robbie Williams, and all of these incredible highlights. But then, at this career pinnacle, I was starting to look at something dark, realising that my internal story was one of powerlessness, of not being able to deal with life on life’s terms. Of opting out by overeating and drinking.

“During the World Cup, I had a very interesting experience where I saw myself on the screen, as I was being seen by the whole world right then. I saw how physically big I was. And I’m short, I’m really short, you know, but I was heavy then. I hadn’t realised how my mindless eating to cope had manifested. There was a massive disconnect between how I felt inside and looked in reality. It was hectic, it was really bad. Like, I was drinking and eating, engaging in escapist behaviour that was really harming me. I realised how all my compulsive behaviours had started to put my life on hold, really.”

Mahola is speaking to Maverick Citizen via a Zoom video call. Along with her husband Nicolas Klemp, and their sons Zazi, 6, and Eli, 4, she is spending lockdown at a music colleague’s home in Tamboerskloof, Cape Town. For the interview, she is seated in an open-plan kitchen. To her left, a stuffed hippo toy sits on a shelf; children’s voices are seeping in from an adjoining room.

Shortly before the lockdown, on 15 March, Mahola emerged from a two-day ayahuasca retreat, hosted near Greyton in the Overberg. She says the brew – a spiritual Amazonian plant medicine, traditionally administered under guidance of a shaman – helped to clarify her goals.

“It was my first ayahuasca medicine journey,” says Mahola. “It was so powerful, it was amazing. There were these two Amazonian Indians who led the ceremony. They had a sort of a translator, he calls himself the bridge between the forest people and civilisation. He was from Brazil, the only one of them who could speak English.

“I went in there with maybe two solid intentions. The one was just to really gain clarity over the next part of my life’s work. And the other was to get the benefit of all the light; the enlightenment. And it was so fascinating, because I did, I got so much clarity around my intentions.”

And what are these intentions, for her foreseeable future?

“It’s threefold, really,” says Mahola. “One is that I want to include the natural world in my work going forward. So I want to include nature in my music videos. I want to be in nature. I’ve become a part of The Sea Change Project, as an ambassador of theirs. They do phenomenal work in terms of, not just conservation, but about highlighting the beauty of the sea and sea life. I started diving with them and learning about the sea.

“Then the other thing is working with children, and creating work for children. Elevating the sanctity of the time of childhood.

“And the third one is a story. I mean, the story that we live will determine the experiences that we have. And that’s such an important thing, having come out of the retreat space into a world completely changed. When I came out of there, well I was going to take my play The One Who Sings to the KKNK festival. I opened my phone and there were all these messages: like, ‘KKNK festival cancelled’. At this point, we can lean into the fear and uncertainty of this time, a lot of people are tapping into that. Or we can move into another reality, and sort of live in the positives; live in what this moment is actually bringing for us.”

In doing research for The One Who Sings, a one-woman play directed by award-winning Faniswa Yisa, Mahola confronted several ghosts of her past.

When she was six years old, her mother went into labour at a Port Elizabeth hospital, never to return home. After her mother’s death, her father married again. From the age of eight to 11 years old, Mahola was sexually abused by a member of her new extended family. After that, her relationships with men were murky.

“Soon after the World Cup, I had reached rock bottom,” she says. “I had to unpick, you know; I started going to AA and I started doing therapy, sort of attacking it in different ways. And all of those were taking me back to the roots where it all started. Looking back, I realised: ‘Oh shit, my mum died and then I essentially lost my dad for a number of years from his emotional disconnection. And then the stepmother and then the stepbrother and that abuse.’ And there were the ways that I had learned to deal with my emotions, to numb them. I started being able to look back and to see the patterns. I had a choice of whether I wanted to continue in the sort of mindless switching off; or if I wanted to change that trajectory and live my authentic life at the end of the day. So that is the basis of the talks that I would do. We all have a life story, and we can choose to take from that story the good and the lessons. We can choose to also change that story, you know?”

Repeatedly during the interview, she refers to the “gift of coronavirus”. It is affording her time to still the “hamster” in her head, and to connect with her family. She’s even baking bread.

Mahola’s love story with Nicolas started in 2000, when they met during her first year of drama school at the University of Cape Town.

“I had to go through a journey to even be ready to have a relationship with somebody,” she says. “To even be able to get to a point of being able to accept love. And that journey had to do with self love.

“What I learned from my sexual abuse experience is that, with men, I need their approval. Because he was also a bully; so I needed him to give me approval. These were some of the beliefs I had: that I couldn’t just be loved for myself, you know, that I had to chase it, I had to chase the love. And even if I got it, I wasn’t worthy of it, so I had to sabotage it. There were a lot of mini-relationships in my life that saw me being interested in people that couldn’t actually give me what I needed. Even with my relationship with Nicolas in the beginning, there was that dynamic at play where I was doing a lot of chasing, and I was doing a lot of, like, needing proof of his love. Even when he was like: ‘I love you,’ I needed validation.

“An interesting moment that happened for us in our relationship was I came to this point where I got really tired of doing that chasing like: ‘love me, love me, love me?’ And I said to him: ‘listen, I can’t chase any more.’ And once that happened, once I reached that point, I didn’t have to play that game any more. Our relationship changed, and went onto a deeper level actually. So all I’m trying to say is that, well, it’s a journey!” Mahola leans back, laughing loudly.

Repeatedly during the interview, she refers to the “gift of coronavirus”. It is affording her time to still the “hamster” in her head, and to connect with her family. She’s even baking bread.

“So I’m taking this time to daydream,” she says. “Maybe we will be in lockdown for a really long time. So maybe podcasting is a way, maybe recording audio books is a way. What I’m really loving right now is doing nearly daily live sessions, where I am playing my music on my Instagram profile and interacting with fans all over the world.

“This has been another gift of corona, that deepening of a connection with people all over the world. I mean it’s amazing that we are all having this same experience, around the world, at once. So there’s this commonality at this time and it’s extraordinary, actually. Finding out how people are doing, how they are keeping themselves sane, what new skills they are learning in this time, where are they drawing their strength from?”

On New Year’s Eve, there weren’t many dry eyes as Mahola’s voice soared over the Kirstenbosch Gardens at Freshlyground’s final gig. On taking a break from the band after 17 years, Mahola says:

“This was a result of all the inner work that I’ve been doing. I need to find my own voice – my voice alone, outside the collaborative space, a space I have loved so much. I really feel like I need to discover who I am when I am alone and when I’m creating alone now. What is purely authentically Zolani’s voice and music and aesthetic?

“And this is what the next is about, about playing and exploring and leaving the safety net of the collaborative space. And yes, I am taking a leap of faith.” DM/MC