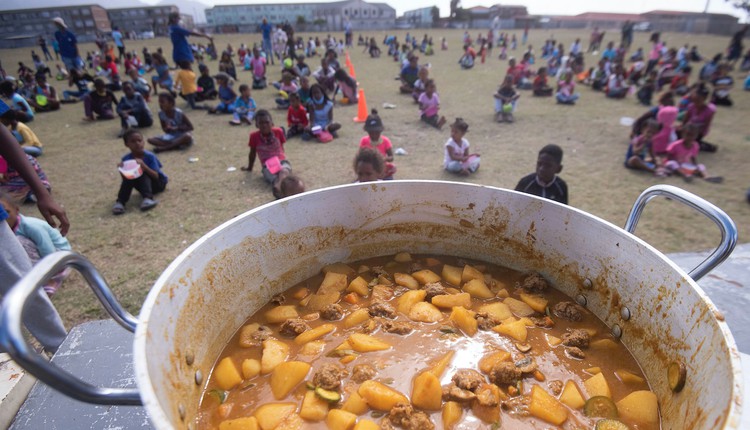 Children sit waiting to be fed on what is known as “the battlefield”, where rival gangs often clash in Lavender Hill. Gang violence in the area has subsided since a ceasefire was brokered following the shooting of five-year-old Valentino Grootetjie in December last year. Photo: BRENTON GEACH

Children sit waiting to be fed on what is known as “the battlefield”, where rival gangs often clash in Lavender Hill. Gang violence in the area has subsided since a ceasefire was brokered following the shooting of five-year-old Valentino Grootetjie in December last year.

On a large open field in Lavender Hill known as ‘the battlefield’, where clashes between rival gangs the Mongrels and Junky Funky Kids take place, over 300 children sit, spaced one-and-a-half-metres apart to reduce the possibility of Covid-19 transmission.

Ranging in age from three years to early teens, the children are waiting in the autumnal midday sun for food. As it is Easter Monday, they will also receive a chocolate egg. For most of them, it will be the only meal they will receive until they return tomorrow.

While the wait for the two 50-litre pots containing rice and stew that will be dished into the plastic containers all the children bring with them, a police van pulls up and the officer warns organiser Mark Nicholson that if the children are still there when police return, he will be given a R2,000 fine because his essential services permit has expired.

Fortunately, the food arrived in the back of a Hyundai van, having been cooked by Lavender Hill resident and activist Lucinda Evans, with a group of volunteers. The food is distributed and the children disperse before the police return to make good their threat. Only a score or so adults remain, having waited to see if there are any leftovers to sate their own hunger.

The feeding of hundreds of children has occurred daily since the start of the national lockdown, with the exception of Easter Sunday when the organisers, cooks, and volunteers took time off to relax with their own families.

Normally, the children would receive food at school. In an area with an employment rate of only about 40%, many parents are unable to afford food at the best of times, and under the extended lockdown, many households are becoming desperate. Households such as those of Kathleen Laurence, who has an 11-year-old and 20-year-old daughter living with her. Laurence says the only income is a child grant of R440 a month.

“There’s no money,” she says. “Normally I go to shops and I ask people. I walk to Grassy Park and ask around but I can’t do that now [under lockdown]. We often sleep without food.”

Veronica Fortune is also a single parent, looking after five children aged from six to 13. Fortune receives a child grant for three of her children but it is not enough to last through the month. Under normal circumstances she too would walk surrounding neighbourhoods looking for work or handouts. Out of desperation she even tried to do so under lockdown, but she said she was beaten by police. (“Die polisie het al vir my geslat omdat ek Grassy Park toe geloop.”)

“With lockdown, we don’t eat,” she says.

Which is why Nicholson, who is director of the Lavender Hill Football Club and overlooks the battleground from the municipal flat he lives in with his wife Shireen and their children, is willing to run the risk of a fine in order to continue feeding the children in his community.

Nicholson is part of a civil society network feeding more than 1,300 children who gather at sites such as the one he serves; in Which Court, Lavender Hill; St. Esther Street in Rondevlei; Magaliesburg Street in Hillview; 11A 12th Avenue in Cafda Village; and Elsie Manning Street in Cafda Village.

In the centre of this network, as yet receiving no support from local or provincial government, is Lucinda Evans, who has also been instrumental in liaison and setting up feeding sites in Delft, Kuils River, Mitchell’s Plain, and Caledon in the Overberg with other organisations.

Evans is director of Philisaa Abafazi Bethu, a non-profit organisation countering gender-based violence, but the prospect of children starving under lockdown prompted her to pivot funds and resources in order to meet the need state-sponsored school feeding schemes no longer meet.

The first, and only, official support received was a gas burner, gas, bags of meal and pulses, and two large pots, delivered with fanfare by Mayor Dan Plato on Tuesday.

Since the start of lockdown, Evans has been cooking in her garage from 7am every day in order to send the food out to the various sites by midday. Easter weekend was rough, she said, as a rumour had been doing the rounds that she and Nicholson were storing food parcels, and as a result there had been a stream of people coming to her house.

Scores of people had also gathered at the gates of nearby Levana Primary School, she said, due to a rumour that food parcels were to be dropped off there. She has had to put a sign on her front door explaining that there are no food parcels in the house.

Additionally, Easter Monday was not the first time Nicholson had been accosted by law enforcement while trying to feed desperately hungry children. She said on Wednesday, 8 April, the City Metro cops had arrived with the intention of breaking up what they had been told was a “holiday programme” for school children. She said they had been sent by a City official who had seen the children sitting on the field in their 1.5metre grid from the control centre where CCTV footage from the adjacent Hillwood Primary School is processed.

The situation was defused, she said, because it was clear children were being fed and necessary social distancing and hygiene precautions were being taken.

The organisational funds she’s directed to feeding children will run out by 19 April, she says. Thankfully Breadline Africa and Rotary Club Newlands are contributing, and the Cape Town Together Community Action Network (CAN) from Plumstead, spearheaded by Lutz Manzelmann, is providing food for the Lavender Hill initiative under Nicholson.

Although no assistance from the City or Province had yet been provided, Evans said she was due to have an urgent meeting with subcouncil 18 manager Fred Monk and chair Shanen Rossouw. Plato was also due to bring a three-ring gas burner and cooking set.

She said all she wanted from the subcouncil officials was for them to speak to churches and schools about running the feeding efforts from their facilities, and for access to the City database so old people could also be fed.

She said she thought the school lockdown might be extended to 23 June. “We need to be ready.”

In the absence of any plan from local ward councillors or other officials, she was developing one for her ward, said Evans.

This would include finding premises from which to operate, such as church halls or schools, particularly as the rainy season approaches, as well as secure storage should food parcels arrive. At the moment all the feeding sites are in the open air.

She was expecting a massive increase in the number of children, and adults, coming to get food. Already children were walking about a kilometre from Overcome informal settlement to get food at Nicholson’s site in Lavender Hill, swelling the numbers from about 250 a week ago to about 350 now.