Cape chefs don their whites to feed the hungry 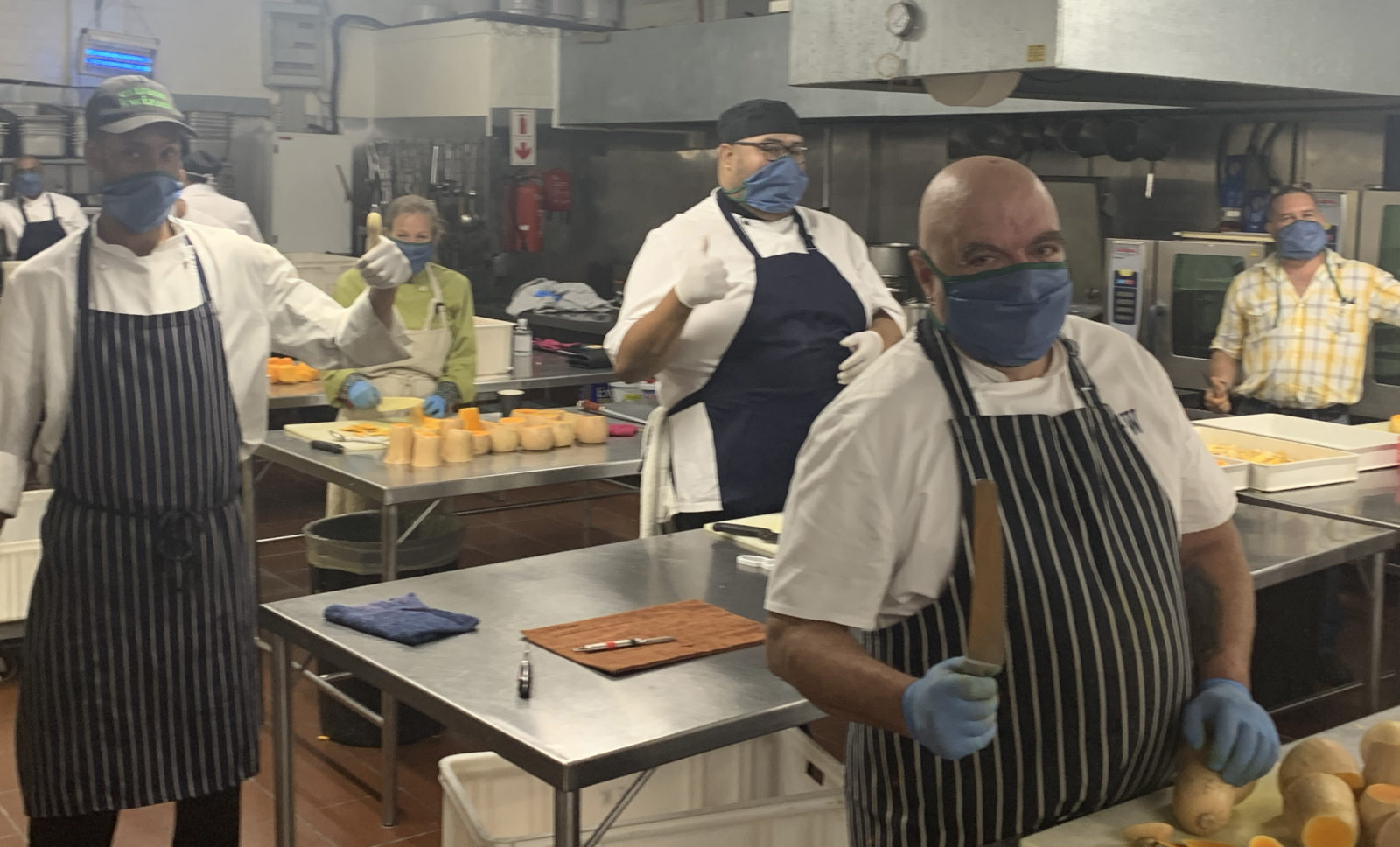 A Cape Town catering kitchen is creating smiles. Thanks to an energetic chef with a big heart, industry volunteers are making soup to feed the hungry masses.

“It’s very rarely a good career move to have a conscience.” In his book Medium Raw: a Bloody Valentine to the World of Food and the People who Cook, the witty American TV chef Anthony Bourdain summed up the dilemma facing many chefs with restaurants that cannot trade during the Covid-19 lockdown.

The show must go on. Most chefs wouldn’t have it any other way.

For chef Wynand du Plessis, owner of Extreem Kwizeen in Cape Town’s Mowbray, not being able to host private and corporate catering and events during lockdown left financial questions and too much time on his hands. His charitable nature and knack for inspiring others soon kicked in.

With 300 litres of spare soup in his freezer on day four of lockdown, Du Plessis decided to donate it to the needy. Driving past a camp in Observatory where homeless communities were being accommodated, he asked questions and was put in touch with the Observatory Improvement District (OBSID). A few referrals later, 45 cups of soup found willing recipients.

“That was where I saw the scale of the hunger problem,” says Du Plessis. “So I started making more soup myself.

Fast forward a couple of weeks and Du Plessis’s schedule involves long days that typically start at 5.30am with vegetable shopping at Cape Town Market in Epping. “I’m working nearly seven days a week but absolutely loving it. That’s what we do, we cook.

“The homeless and hungry in Observatory are now sorted. We live around the corner from Extreem Kwizeen so it’s easy. Every morning I get messaged to feed between 80 to 160 people. We warm up soup and hand out cups; a lady up the road makes sandwiches. I open our facility and they come to collect. Later they return the dirty pots.”

It’s a simple yet effective system. Du Plessis communicates with ward councillors, who in turn work with City Improvement Districts (CIDs) and community organisations, who direct the CID vans that deliver frozen soup.

“They’ll try to find freezer space in the community, with the assistance of SAPS,” he says. “They’re warming up the soup in their houses, and doing their outreach using the Muslim or Christian church ladies or sports clubs.”

“I call this my Soupathon 1,000. It’s where it all started,” says Du Plessis, brimming with enthusiasm. “We’re not doing lamb racks on plates, we’re cooking the simplest of simplest. Sweet potato soup, carrot soup, butternut soup … whatever is donated by sponsors or sold to us at a good price.” Fruit and vegetable agents at the Epping market are coming to the party too, offering Du Plessis bargain pricing for vegetarian ingredients.

The system is simple. One-litre recycled plastic tubs are frozen, then 10 blocks are vacuum-packed into a freezer bag and distributed as a 10-litre frozen soup bag. “Each 1 litre makes 1,5 litres of finished soup – we make it thick and pasty to extend its reach. For every 1 litre of frozen soup, we suggest they add 500ml water,” says Du Plessis. A 200ml cup of hot soup costs only 23 cents. So a R1 donation can feed a family of four.

This is where volunteer chefs come in. A week ago, Du Plessis called around to recruit chefs for a day of unpaid work. They pitched. And wanted to return. Since then the project has scaled up. A roster of weekly slots is now set up.

Dion Ventagass normally runs the main kitchen, restaurants and bar as Belmond Mount Nelson Hotel’s chef du cuisine. About 50 chefs prep in the hotel kitchen during peak season. From next week, Ventagass and Ginger Blossom consulting chef Evan Coosner will each pull together a chef crew of four volunteers. Together they will man two days of Soupathon 1,000.

“Wynand is good at this. He’s 100% in it for the cause, so as chefs it wasn’t hard. We’re doing nothing,” says Ventagass. “Every chef is itching to get off their arse and go and cut vegetables, to do something again.” Ventagass’s hotel banqueting chef colleague Sven Adams is also a volunteer.

Other chefs giving of their time include Jocelyn Myers-Adams of JMA Hospitality and Consulting, and head chef Leonard Loxton at L&T Caterers in Century City. Extreem Kwizeen head chef Neil Petersen rounded up some of Du Plessis’s own staff as volunteers, including chief dishwasher Andile Ndingane. Wynand’s wife Lizelle coordinates whatever else needs to be done. The core Soupathon team only has Sundays off.

Pete Goffe-Wood and wife Elize usually operate stalls at various Cape Town food markets. He is also chef at Paarl’s Viande restaurant at the Grande Roche hotel. Goffe-Wood didn’t hesitate when his old friend called him in. “Wynand’s got a large operation in Mowbray and they need extra chef hands,” says Goffe-Wood.

“We’re keeping the social distancing thing, so there are about 10 chefs and two or three cleaners max, at a time. One person is usually 2 metres away from the next chef prepping. It’s an entire day so it’s a full shift.”

Andrea Foulkes volunteered, and also recruited some of her Dish Food & Social catering team this past week. They include Hurter van Breda, Craig Backhouse and Chris Wynn. “Wynand’s done it entirely alone until we all joined in. Last Tuesday we all cooked there,” she says. “We’ll do it again from next week.”

The Soupathon is reliant on donations. So Du Plessis was delighted when FNB came to the party and helped set up a charge-free bank account and Snapscan function. “It means that every single cent donated is used to buy ingredients,” he says.

Kitchen volunteers have no contact with the food distribution side, and a health and safety officer is always on-site. “We run a very tight ship. As much as we’re trying to feel and do good, we need our chefs to be safe,” says Du Plessis.

The outpouring of humanity is what keeps Du Plessis motivated. “The generosity of complete strangers has just been astounding. The CID distribution vans are being stopped on their rounds, and people are giving them tins of baked beans and lentils and whatever,” he says. “I’ve had people knocking on my front door. Absolute strangers. Some guy knocked and said: I’ve also lost my job but here is 300 bucks.” Another stranger called to say he was sending two pallets of egg noodles. The next day they arrived.

By the end of Thursday 16 April, Soupathon cash donations for ingredients had exceeded R50,000. The project is about to increase exponentially. Local governmental organisations have taken an interest in this simple concept. The SA Chefs Association has now committed to putting its weight behind fundraising mechanisms for corporate and private ingredient donations.

Du Plessis is a bear of a man and he’s amped about continuing soup rollout for the hungry and homeless. He wants chefs to take their enthusiasm back to other kitchens to inspire their juniors.

“The soup is literally going anywhere and everywhere as long as it’s legit. And has funds coming in. My job is to make as much soup as I can. We’re not going to stop.” DM/TGIFood

To donate cash or ingredients to Soupathon 1,000, contact [email protected]