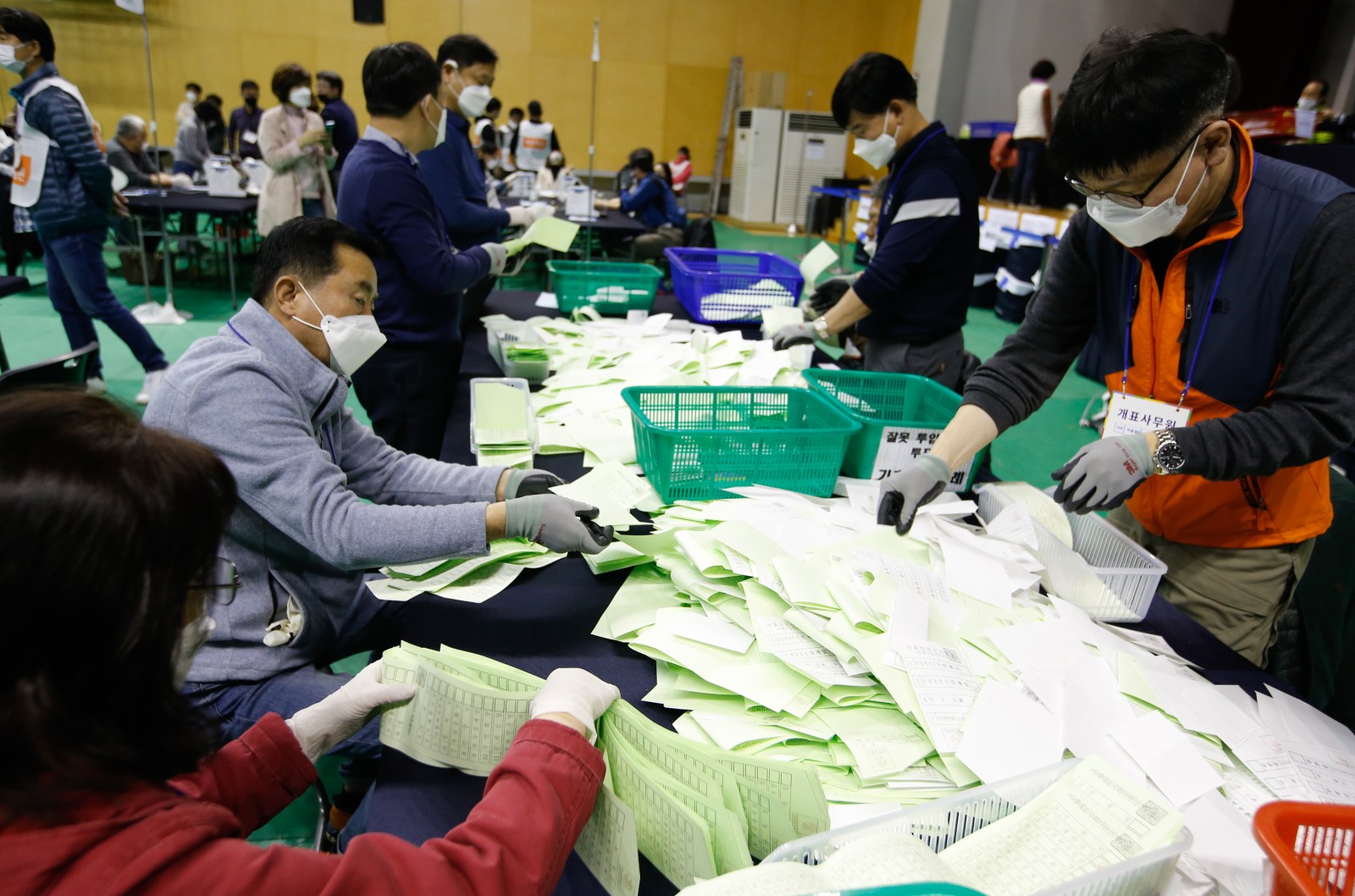 The election was watched around the world as one of the first nationwide votes since the pandemic began.

Authorities took stringent safety measures, disinfecting all 14,000 polling stations and requiring voters to wear masks, have their temperatures checked, use hand sanitizer and plastic gloves and maintain a safe distance from others.

Driven by record high participation in early voting over the weekend, turnout was 66.2%, higher than any parliamentary elections held since 1992, according to the National Election Commission.

About 2,800 coronavirus patients were allowed to vote by mail or in person, using special booths, while more than 13,000 in self-quarantine cast their ballots after polls closed.

Approval ratings for Moon and his Democratic Party took a serious blow in February when the first major outbreak outside of China hit South Korea, which was already reeling from a stagnant economy and a series of domestic political scandals.

But since then, the administration’s largely successful campaign against the virus provided a boon in popularity for Moon and his progressive party.

The ruling camp secured 180 seats in the 300-member, single-chamber parliament, up from the current 120. The main conservative opposition coalition won 103 seats, according to the National Election Commission.

“The people empowered our desperate efforts to overcome the national crisis through the election,” Moon said in a statement, thanking citizens for complying with safety guidance and the high voter turnout.

Former prime minister Lee Nak-yon, who ran the ruling party’s campaign, said in a televised speech the victory was a “strict command” from the voters to tackle the virus and minimise its economic impact.

A ruling party majority in parliament will help Moon to press ahead with his agenda in his final two years in office, including looser fiscal policies aimed at creating jobs, a higher minimum wage and engagement with North Korea.

The Democratic Party got a boost from the greater Seoul metropolitan area, where it seized more than 80% of seats up for grabs.

One setback was in the swanky Gangnam district, where a former North Korean diplomat defector standing for the main opposition conservative party beat out a four-term ruling party lawmaker by nearly a 20% margin.

The United Future Party also swept the region of Daegu and North Gyeongsang Province, which was hardest hit by the coronavirus outbreak.

The area is a longtime conservative stronghold and experts say voter sentiment against the government may have been further fuelled by the initial struggle with the surge in cases there, including controversy over whether a lockdown was necessary.

South Korea has largely managed to bring its epidemic under control without major disruption thanks to an extensive testing campaign and intensive contact tracing, earning praise from the World Health Organization and other nations.

The Korea Centers for Disease Control and Prevention reported 22 new coronavirus cases on Thursday, bringing the total number to 10,613.

The daily tally of new cases has hovered around 30 in the past week, mostly people arriving from abroad.

“Though the situation is still tough, I think the government’s response to the coronavirus, including its preparations for the vote, could have helped in the election,” said Han Ga-hae, a 28-year-old voter. (Reporting by Hyonhee Shin; Additional reporting by Sangmi Cha; Editing by Lincoln Feast.)