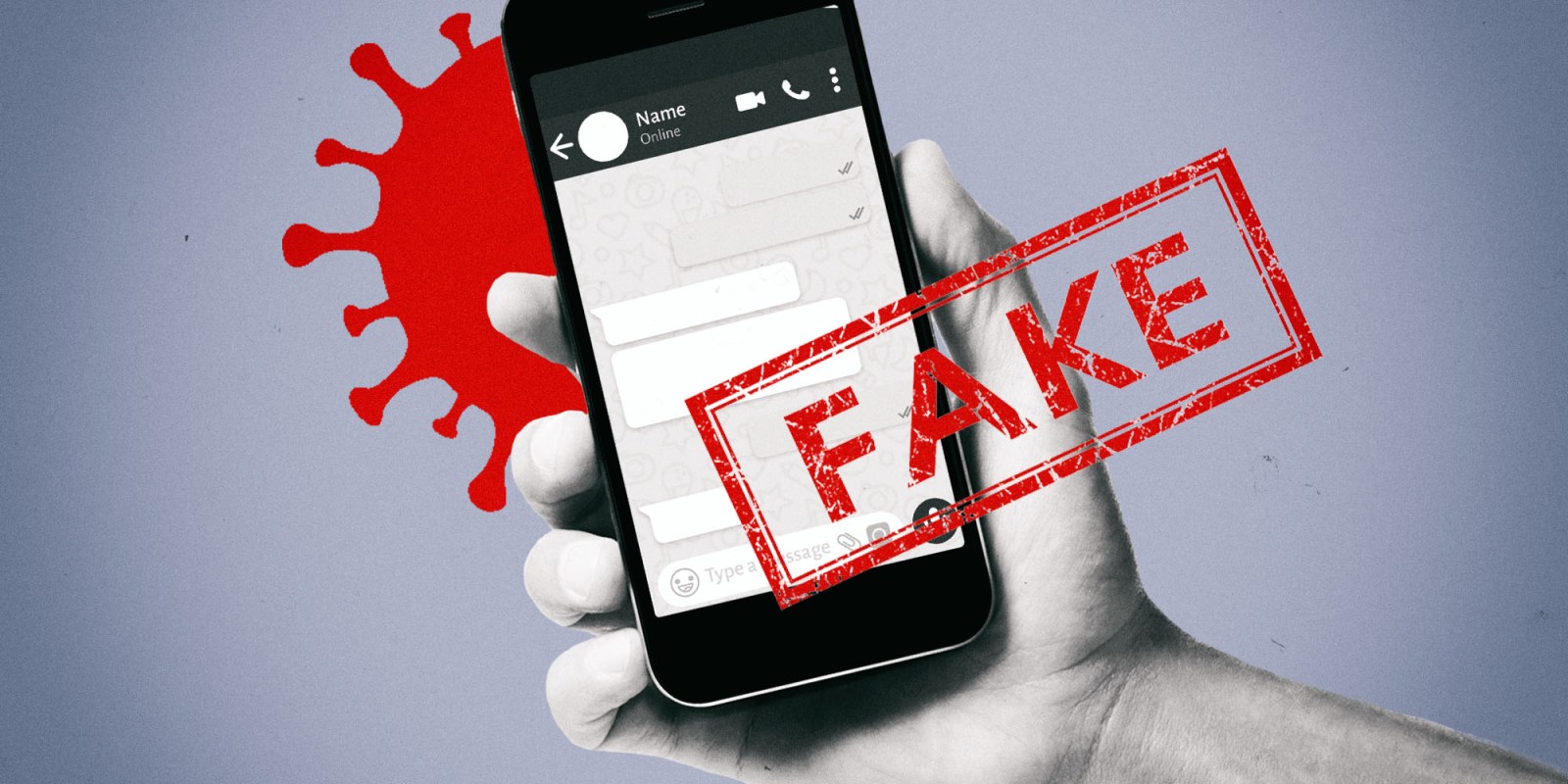 Three weeks into South Africa’s lockdown, fake news continues to spread along with growing concerns over Covid-19. Global institutions, governments and the media are struggling to combat the misinformation epidemic.

With much of the world in lockdown during the coronavirus pandemic, the UN has recently been posting recorded statements from Secretary-General António Guterres online. He’s called for a global ceasefire and for societies to protect women against gender-based violence during the pandemic.

This week Guterres called out another challenge, “a dangerous epidemic of misinformation”.

As Daily Maverick has pointed out, fake news proliferated as Covid-19 started to spread in South Africa. In the weeks since, there has been a concerted effort to understand and combat misinformation, which can undermine regulations to limit the spread of the virus and be harmful to individual and societal health.

“Around the world people are scared. They want to know what to do and where to turn for advice. This is a time for science and solidarity,” said Guterres in a video address on Tuesday 14 April.

“Harmful health advice and snake-oil solutions are proliferating. Falsehoods are filling the airwaves. Wild conspiracy theories are infecting the internet. Hatred is going viral, stigmatising and vilifying people and groups.”

Speaking during a webinar hosted by Wits University’s journalism department on Wednesday, Dr Claire Wardle, executive director of First Draft News, which was established to counter misinformation, said it’s the first time she has seen the whole world getting misinformation at the same time.

People often share dodgy information on WhatsApp groups, but it’s unlikely to be intentional or malicious. “As we know, when you’re frightened your brain stops being critical,” said Wardle.

Such messages or posts often contain kernels of truth that give a level of legitimacy to the falsehoods. They might take on the language or letterhead of a trusted authority, be tagged “breaking” as though they are from the media, or purport to come from an insider with exclusive information.

Wardle said people often doubt the authenticity of such messages but, just in case it’s true, decide to share it with those they care about out of concern.

Across the world, authorities have advised people to get information from official sources, but amidst confusion over the nature of the virus, panic and many people lacking the ability to spot or fact check questionable information, fake news flourishes.

It is sent from one WhatsApp group to another and then another.

“To me, it’s almost like gossip, it’s like a secret,” said Wardle. “As we know, secrets never stay with one person.”

The World Health Organisation’s myth busters page provides an overview of some of the most common falsehoods spread on causes and remedies for the virus, including that 5G networks spread Covid-19, that high or low temperatures limit its spread, and that spraying alcohol or chlorine over your body kills the virus.

There’s also disinformation being shared to cause deliberate harm for financial, political or social gain or for psychological reasons.

At least eight people have been arrested in South Africa, where it’s an offence to publish misinformation about the virus with the intent to deceive. That includes Western Cape resident Stephen Birch, who published a video discouraging people from getting tested because, he said, the test swabs were contaminated with the virus.

Many media organisations are having to play a more educational role, which has in the past often been left to government-funded organisations, to inform the public and combat misinformation, said SA National Editors Forum chairperson Mahlatse Mahlase.

That’s difficult, however, as resources at news outlets remain constrained. Another challenge is that information and advice on the pandemic from experts continues to change, such as the revised advice on whether the public should wear masks, making it difficult for the media to build and maintain trust with audiences.

“We’ve never had a story where the facts are changing so quickly,” said Wardle, suggesting the media be upfront about the rapid changes in advice information.

There’s also the challenge of which misinformation is worth debunking. Mahlase, who is also group editor-in-chief at Eyewitness News, said her newsroom bases its decision on whether to debunk certain information based on the spread and level of danger posed.

Wardle said the media must find innovative methods to spread factual information while the public relies heavily on peer-to-peer services rather than traditional media. Lee Mwiti from Africa Check said communicators must craft local solutions; what works in the United States may not necessarily work in South Africa.

“Social media companies must do more to root out hate and harmful assertions about Covid-19,” said Guterres.

Social media companies have taken steps during the Covid-19 outbreak to promote factual content and combat misinformation, but the moves are largely seen as insufficient.

WhatsApp has made it more difficult to forward messages to multiple groups while other platforms such as Twitter and Facebook have focused on increasing their capacity to process and act on posts that are seen as misleading. Such efforts are seen as an improvement, but largely ineffective given the spread of misinformation.

Guterres on Tuesday said the UN is establishing a new communications response initiative “to flood the internet with facts and science while countering the growing scourge of misinformation, a poison that is putting even more lives at risks”.

South Africa’s Department of Communications and Digital Technologies is working with Media Monitoring Africa and the CovidComms volunteer communication network to remove fake news from the internet and report cases to the SAPS.

“We are stepping up our campaign against digital misinformation, particularly in relation to Covid-19 and related actions such as the national lockdown,” said Acting Communications Minister Jackson Mthembu on Wednesday.

“We also need to remind South Africans that spreading fake news or disinformation about Covid-19 is a punishable offence. Arrests have already been made, and they will continue if people persist in spreading fake news,” Mthembu added.