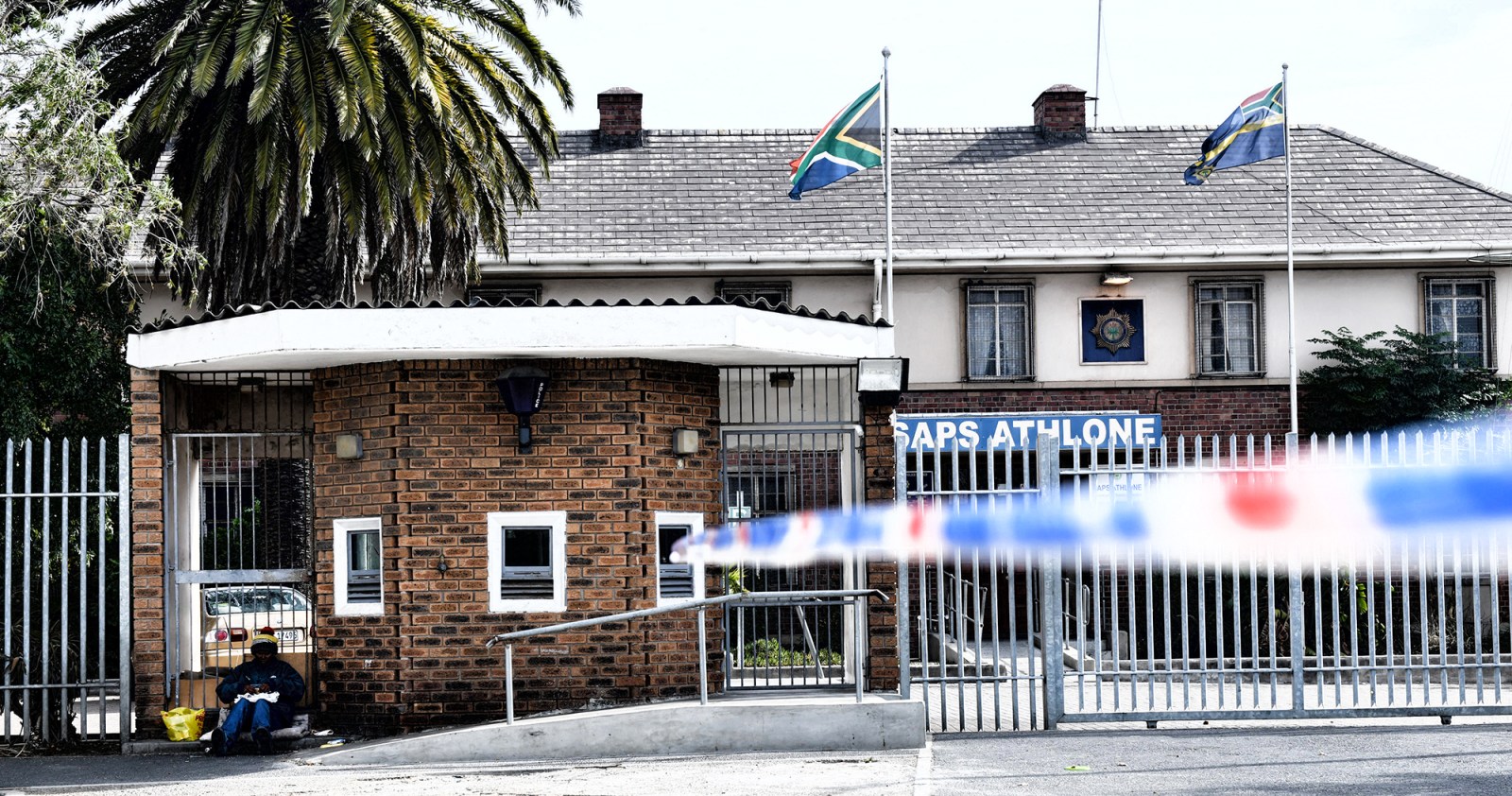 CAPE TOWN, SOUTH AFRICA - APRIL 11: A general view of Athlone Police Station on April 11, 2020 in Cape Town, South Africa. According to media reports, the Athlone police station has been closed after a warrant officer tested positive for Covid-19, the first confirmed case of a police officer in the Western Cape. (Photo by Gallo Images/Rapport/ Edrea du Toit)

The Athlone Police Station in Cape Town was forced to close its doors over the weekend after a warrant officer tested positive with the coronavirus. Meanwhile, shops in Nyanga and Mitchells Plain have been looted by desperate residents.

National police spokesperson Brigadier Vish Naidoo confirmed the Western Cape’s first case of a police officer testing positive with the coronavirus, which resulted in the temporary closure of the Athlone charge office.

About 20 shift members were placed in self-isolation pending test results. The station has since been decontaminated and police services were rendered from an adjacent community centre of the station. The station reopened its doors on Monday 13 April.

The SAPS was dealt another blow when a Hermanus police member also tested positive. Operations were moved to the pavement while the complex was sanitised. None of the officers who came into contact with the infected SAPS member has shown any symptoms of the virus, but they will remain in self-quarantine.

Meanwhile, while the SAPS battled to stop Covid-19 spreading among its members, residents in and around Nyanga Junction and Gatesvillle went on the rampage and looted shops.

Shoprite was stormed, with looters making off with cash registers. At Nyanga Junction, hundreds of people from Manenberg and Nyanga stormed Shoprite in the shopping complex.

Violent street protests also broke out in Mitchells Plain this week as frustrated and angry residents vented their anger at the failure to hand out food parcels which were due to be distributed.

Tension simmered when members of the Early Childhood Development, which has been making up food parcels out of its own resources, arrived in Mitchells Plain to distribute these.

However, residents were fed fake news that Sassa was handing out the parcels and when these dried up “all hell broke loose”. Residents barricaded roads with burning tyres and pelted motorists and SAPS members with stones. The situation was only defused when reinforcements and members of the South African National Defence Force arrived. Several roads were closed but later reopened when the situation calmed down.

Activist Yusuf Abramjee, condemning the wave of looting, said the demand for food required urgent government intervention and warned that the frustration of the hungry had the potential to become a national crisis.

“People are becoming desperate. They have been promised food parcels, but are still waiting. Scores of people are unemployed and with no money coming in we have found that people resort to looting because they are hungry.

“Food Operation and the Zakaad South African National Fund have partnered with Social Development in Gauteng and up until yesterday delivered R5-million of food relief,” he said.

Abramjee reiterated that government should ensure that the Solidarity Fund is used to make meaningful food relief contributions.

He said the spread of fake news had the potential to cause further chaos.

On Monday 13 March, a fake message informing Alexandria residents that food would be delivered at a school saw thousands waiting in vain. People eventually left empty-handed.

“I condemn in the strongest terms the numerous lootings of liquor stores which have been reported across the province during the lockdown. The Department of Community Safety is actively engaging with the Western Cape Liquor Authority and SAPS in the Western Cape to implement processes to prevent lootings,” said Fritz.

He added that the Department of Community Safety was “actively engaging” retail management, the Western Cape Liquor Authority and SAPS in the Western Cape to implement processes to prevent lootings.

Fritz added that South Africa was facing a humanitarian crisis because of the lockdown. DM