How do we explain the low Covid-19 caseload in Africa (so far)? 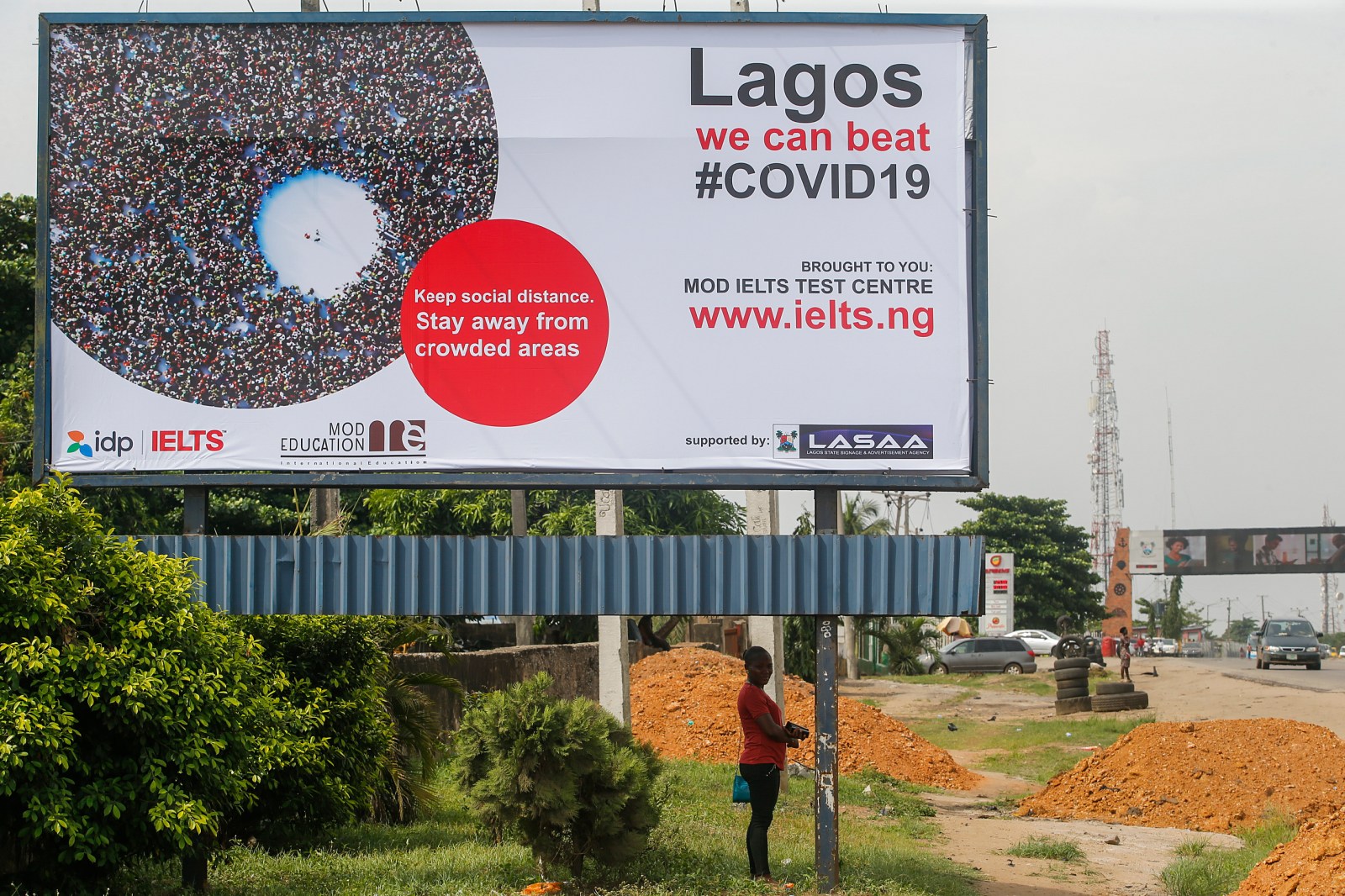 A billboard with a message on the prevention of the coronavirus along the Lagos-Ibadan expressway in Lagos, Nigeria. (Photo: EPA-EFE / Akintunde Akinleye)

While some of the most developed healthcare infrastructure in the world has faltered in tackling the Covid-19 pandemic, Africa, with its fragile healthcare systems, seems the least-affected continent so far. How do we understand this?

Why are there so few Covid-19 cases in Africa, a continent bigger than China, the US and Canada combined?

Many suggest the low caseload is because of inadequate testing facilities due to scarce resources and weak healthcare systems in Africa (see also here and here). However, we have made some other observations, related to demographics, behavioural patterns, age dynamics, climate and other factors, that could be keeping the overall caseload low in Africa. A study of these observations might catalyse some intriguing research as the world grapples to combat a common enemy that does not respect religious affiliation, economic status or geographic boundary.

A high population density implies people reside close to each other and chances of them interacting with each other are very high. Such interaction during a pandemic can accelerate spread of the disease.

This logic also applies to Africa, where some countries, for example, South Africa, Egypt, Morocco and Algeria, have crowded and highly urbanised settlements, unlike the pastoral situation in much of the rest of Africa. As of 12 April, these four countries had reported relatively high Covid-19 counts — 7,409 cases and 559 deaths — as compared to southern, eastern, and central Africa, which had reported only 35, 27 and 38 Covid-19 casualties, respectively.

While there are almost borderless, regional economic communities and political free-trade blocs (IGAD, SADC, AMU, ECOWAS, ECCAS, CEN-SAD), movement to and from the African continent is relatively limited compared to other continents. A careful look at flight data shows African airports experience the fewest number of intercontinental incoming flights.

Apart from OR Tambo International Airport in Johannesburg, no airport in Africa makes it onto the list of top 50 busiest airports in the world. The consequence is evident in South Africa’s Covid-19 cases topping 2,000, while cases in many other African countries have not reached 50.

Regional hubs Addis Ababa, Nairobi, Johannesburg, Abuja and Cairo, have imposed varying levels of international flight bans and the restricted movement has clearly kept down transmission into the continent.

Covid-19 is more dangerous for people aged above 65. In Italy, which has been hardest hit, the population ratio of 65 or above is 23.1%. In Africa it is below 5%. Africa’s youth, below 25 to be exact, is 60% of the population of the continent. This demographic appears to be a protection factor.

Africans have adopted good communal health-seeking behaviour over time, primarily due to the history, extent and nature of social development movements and awareness, both by NGOs (including UN bodies) and faith-based institutions. Also, following two recent deadly epidemics — Ebola virus and Congo virus — Africans have become more responsive to local government calls for caution during disease outbreaks. Such behaviour is less common in Europe. For instance, people in Italy and the UK initially ignored government appeals to maintain social distancing. The number of Covid-19 cases in those countries quickly multiplied.

Initial research indicates a negative correlation between the occurrence of malaria and Covid-19 in a region. Malaria-affected countries seem to be relatively safer from Covid-19, and vice versa. The figure below shows this correlation.

Africa is severely afflicted by malaria. According to the World Health Organization (WHO), in 2015 nine out of 10 patients with malaria were reported in Africa. More recently, in 2018, 93% of the total cases of malaria were found in Africa. As a result, African people, as compared to the people in other regions, have taken more anti-malarial drugs, which might have given them some additional level of protection from Covid-19. This phenomenon is catching the attention of researchers and scientists seeking Covid-19 cures and vaccines.

Similarly, research has confirmed a negative association between the incidence of tuberculosis (TB) and Covid-19. As opposed to low-burden TB countries, high-burden TB African countries have long had national Bacillus Calmette-Guerin (BCG) childhood vaccinations for everyone. Countries without universal policies of BCG vaccination (i.e., Italy and the US) have been affected hard by COVID-19 compared to countries with universal BCG policies.

On the other hand, as per a research article published by Nature magazine, the extent of possible genetic mutation of Covid-19 in different geographic populations can also be the reason for different transmission rates.

A further possibility is that Africa’s climate is not conducive for the spread of coronavirus. Some early research suggests higher temperatures and humidity correlates with a lower transmission of Covid-19. Places with the greatest number of Covid-19 patients are not as warm and dry as Africa.

Africa, by and large, is sunnier than Europe, most of the US, Canada and China. A research article in the British Medical Journal concludes that vitamin D supplementation reduces acute respiratory tract infection by almost half. Therefore, people in sunnier regions, receiving higher amounts of vitamin D, may be more immune towards respiratory tract infections in general.

The other side of the picture

The observations above remain speculation and subjects for debate as the research is preliminary and not yet peer-reviewed.

Lower incidence of Covid-19 in Africa might well relate back to a paucity of the necessary testing facilities for identifying the virus in the local communities.

Also, other infectious diseases with apparently similar symptoms, such as flu and pneumonia, might be masking the actual number of Covid-19 cases in Africa.

Various factors could make Africa particularly vulnerable once Covid-19 becomes entrenched. For instance, the narrative of overcrowding in cities, poor sanitation and an existing high burden of diseases that predispose people to Covid-19 in Africa is well-known. These factors, accompanied by weak public health systems and governance mechanisms, suggest that Africa will be more prone to the transmission of Covid-19.

Covid-19 could end up spreading like wildfire in the region. Impoverished masses in the slums of Addis Ababa, Mogadishu and Nairobi might bear the brunt. If the pandemic goes on for weeks and months it will compromise existing and ongoing health initiatives in the region, such as against polio and Ebola, thus making matters worse.

A WHO official said recently: “We are all in this together and we can only succeed together.” Therefore, world leaders must step up and devise both localised and globalised strategies. Such strategies should put an end not only to the prevailing crisis but also to their boomerang effects, which may result from overlooking a continent with 1.2 billion people. As long as there is no viable treatment or vaccine, there is no place for complacency in the fight against Covid-19.

Africa should prepare for the worst by quickly mobilising local resources, rapidly ramping up capabilities and thoroughly implementing the proposed guidelines.

Similarly, the international community must increase its technical assistance and provide added funding to mitigate the threats of pandemic already damaging the global North and swiftly marching towards Africa. DM/MC

Nasir Javaid is enrolled in Massachusetts Institute of Technology’s MicroMasters Program in Data, Economics and Development Policy. He tweets at @Nasir_Minhas.