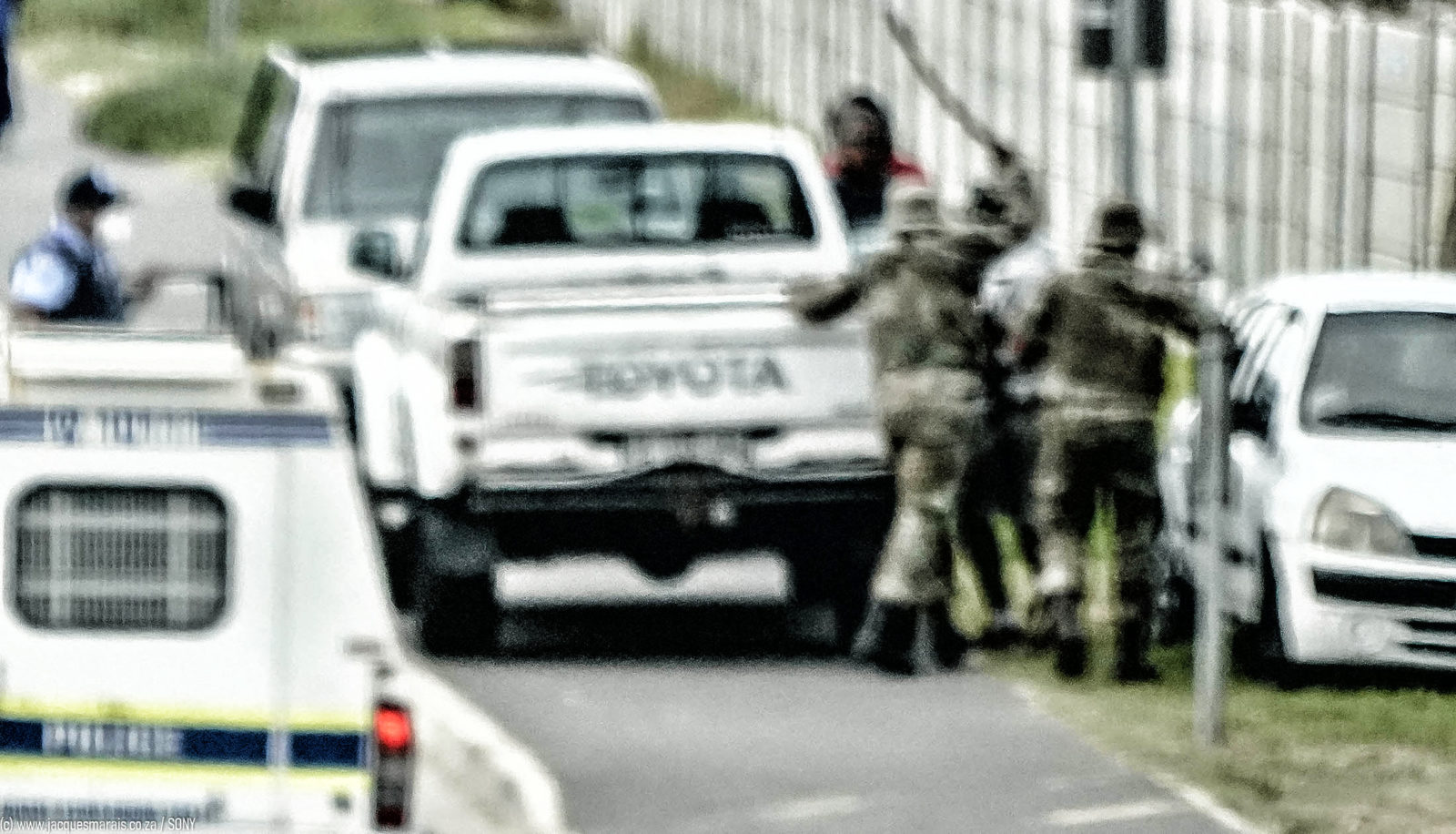 Guardians of the law leave no love in the time warp of Corona.

“Wisdom comes to us when it can no longer do any good.”  ― Gabriel García Márquez, Love in the Time of Cholera

I spent Thursday in Masiphumelele, a relatively okay township mushrooming in Cape Town’s Deep South. When I say it is relatively okay, I mean it is not a total slum. And even though I still kak myself a little bit when I walk in there on my own as a whitey from way back, I know some of the people who work for me live there. And they all have good hearts, and if you extrapolate this, there should be more good than bad amidst the chaotic corrugated-iron confusion tetrissing along the narrow roads.

My mission was to try to capture a few personal stories from the #COVID19 coal-face: vox pop kinda fluffy stuff about how Corona has changed lives; how it is affecting financial futures; whether there’s less crime; what people really believe about the virus and what they’re doing to counter it …

And, of course, whether the concept of lockdown is actually working beyond the middle-class scope of Netflix viewing schedules and that backyard picket fence where you – yes, you – hang about with binocs so you can moan online about the absurdity of some geriatric gentleman taking his dog for a walk. I mean, the horror, the horror!!

The bottom line is a resounding NO. People in a township cannot physically self-isolate: it is virtually impossible, no matter how scared they may be of this virus (and a lot of them are). Life has no choice but to spill over into the dusty yards and littered streets, because there are four, or six, or maybe more, people to a room. And somehow, someone needs to put the next meal on the table (and yes, your corny beans-on-toast meme would rate as a heaven-sent meal here).

Phindi Ndlati and her husband Thembelani Mfunda – who lost his job due to Covid-19 – spent their last cash on a meagre plastic bag of provisions from Foodzone:

“Now we do not have money to buy any more food, so I don’t know what we will do now,” Phindi says, with pride battling uncertainty as she gazes beyond the lens.

Mister Khosa, a handyman from Zimbabwe, explains: “There is a whole lot of mischievousness here with people not keeping their 1m distance”. He points across to a small square where a soccer match ebbs and flows and shakes his head, smiling apologetically. Luyanda Lendile and his pavement hawker mate have had no customers, because no-one has cash: they want me to throw them some money “so we do not have to go and steal all the time”. 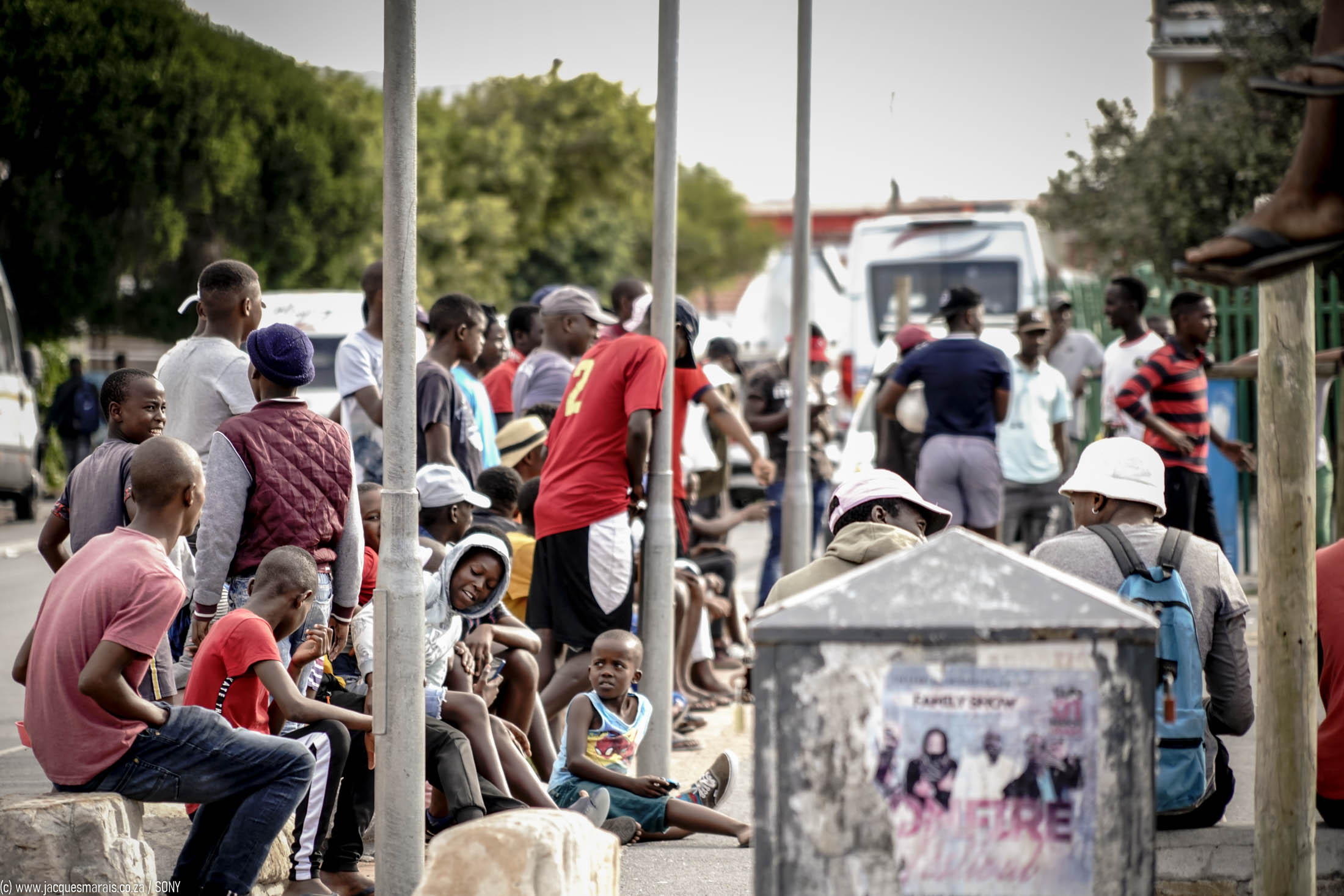 Banele Nondlala, who works at the animal rescue society TEARS is one of the lucky ones. Out of all the people in Masiphumelele that I interview, he is the only one with a job. He is one of the animal handlers: even though most of the dogs have been ‘adopted’ for lockdown, he still comes in to help the vets with emergency cases.

“It is difficult to keep our distance with six people in the house,” he explains softly.

I leave Masi, kindling a tiny spark of hope, and drive to Ocean View. And then, in seconds, everything changes. A convoy of a dozen police vehicles and one of those menacing Caspirs come speeding past. On the spur of the moment, I decide to follow them back into the warren of Masi alleys and shacks and dirt that shift-shape upon the border of the industrial sprawl of Fish Eagle Park.

As I turn off the main road, the convoy judders to a standstill, with police and soldiers spilling from vehicles and descending in droves upon the pedestrians jostling on the pavements. Things become a bit of a blur here: the aggression is unchecked, and as far as I can see, completely without reason. I surreptitiously shoot through the car window, trying to take photos without attracting attention.

As a policeman starts walking towards me, I see men with sticks viciously beating a man next to a silver Toyota bakkie. The sticks rise and fall, then he is grabbed and forced into the vehicle. (I’ll later notice this as a blur of brutality in the background of the sequence of photos, but miss a clear shot.) The convoy starts moving again and the cop turns around to hop into his vehicle as they continue further into the township proper.

I’ve got my accreditation, travel permit and press card, so I keep going: this feels like ‘real journalism’ as opposed to my adventure sport missions over the past couple of decades. We grind to a halt again 500m down the road, where a police vehicle blocks my way, forcing me to continue on foot.

“I’m a journalist,” I identify myself to the officer in the vehicle, and he waves me on to where four burly officers preside over a not-so-thin blue line. As I walk up to them, one of the men – with a buff mask and dark glasses covering his face – shouts: “What the fuck do you think you’re doing here.” I notice their hands hovering over their pistols.

I’m wearing a neon ‘official’ bib, so I hold up my camera and explain that I’m a journalist, and that I’m happy to fetch my media card from the vehicle to prove this.

“Just fuck off,” is his response, so I turn around to fetch my documentation, trying to rationalise that this is a tense situation, but pretty confident that it can be resolved.

It gets uglier though: as I’m leaning into the vehicle to get my media card, the door bangs into my back. I turn around and two men in plainclothes – who are clearly visible in my photos as part of the police operation – barge up against me, shouting and brandishing massive sticks at me. I’m not talking batons, but 4ft-long wooden clubs, easily as thick as your upper arm.

Both men’s faces are covered in Buffs, and I’m sworn at and abused and threatened for the next couple of minutes. My proffered media accreditation is ignored and hurled back into the vehicle. When I dare to ask one of them for his name, he draws himself up to his full burly height, lifts his club and says, “Fuck of. Or you will die here today.”

I think about Standing Order 156, but I’m not brave enough to voice my rights.

I left then, and I am both glad and ashamed that I did … Glad, because I have never felt quite as threatened in my whole life. And ashamed, because the thousands of people who live in Masi – and the millions in other townships – have no place else to go when shit like this goes down. And I shudder to think what happened once I had turned my back and walked away.

So fuck that. Cyril may be a good guy and I really think he is doing his best, but he remains surrounded by a crew of corrupt, incompetent and despicable people (excluding Minister Zweli Mkhize and a scattering of good guys). The masses have been hanging on for a meaningful economic change, but there is no real sign of this. And it seems no thought is given by our power-mongering parliament to the havoc this extended lockdown will wreak in the many townships across South Africa.

I did not see any humanity in the masked faces of those thugs who confronted me, only irrational anger driven by unchecked aggression. I did not see any warning being given before the beating I witnessed. And I did not see even a smidgen of economic assistance applied anywhere in that township. What I did see is a system that seems irreparably broken.

So, when next you raise your gin and tonic while gazing out across your now slightly unkempt lawns, please understand that your ex-gardener or domestic servant or nanny is pretty much fighting for their life out there (despite your posts loudly proclaiming that you will so generously ‘pay their full salaries until this all ends’). I’m sure it makes you sleep well at night under your high thread-count duvet.

Loads of employers won’t live up to this easy social media patter, while many others will be forced to tighten their own belts just in order to survive. Understand that the people of Masi have no outside to go to when they leave their ‘inside’; there is no water in many of their homes, no iPad with unlimited WiFi, or Cable TV to entertain their kids.

So what would you do in their place as a mother or a father or gogo or brother? You eventually do go outside, and there you are forced to share a narrow alleyway with dozens of other people. And you dream of the fresh air back home in Cofimvaba while the township din reverberates all around.

And then, without warning, you are surrounded and abused and beaten by police (who are understandably stressed out by their own fears and insecurity, I fucking get it, but there is still no excuse). And when you have no inside or outside left to flee to? That is the crux right there; because now there is no other place for these people to go but to rise up.

This is not my government anymore. But then, with the exception of a short period of halcyon hope post-1994, I’ve not felt much beholden to any government. So you guys can have them, and féte them, and toast them with your chilled chardonnay, and fiddle the fuck away while what little is left of the economy burns to dust.

I won’t be joining you. DM

PS: I swore a lot. I’m sorry, but I’m pretty pissed off. And yes, I know I’ve generalised, but most of you do it on a daily basis, anyway. So sue me. Or avert your eyes as you sit in your houses with extended backyards, and fully stocked pantries (or larders, or whatever you call them) all while bitching about your evaporating wine cellar stock and how ‘the people’ out there just do not understand the importance of social distancing. Boo-fucking-hoo.