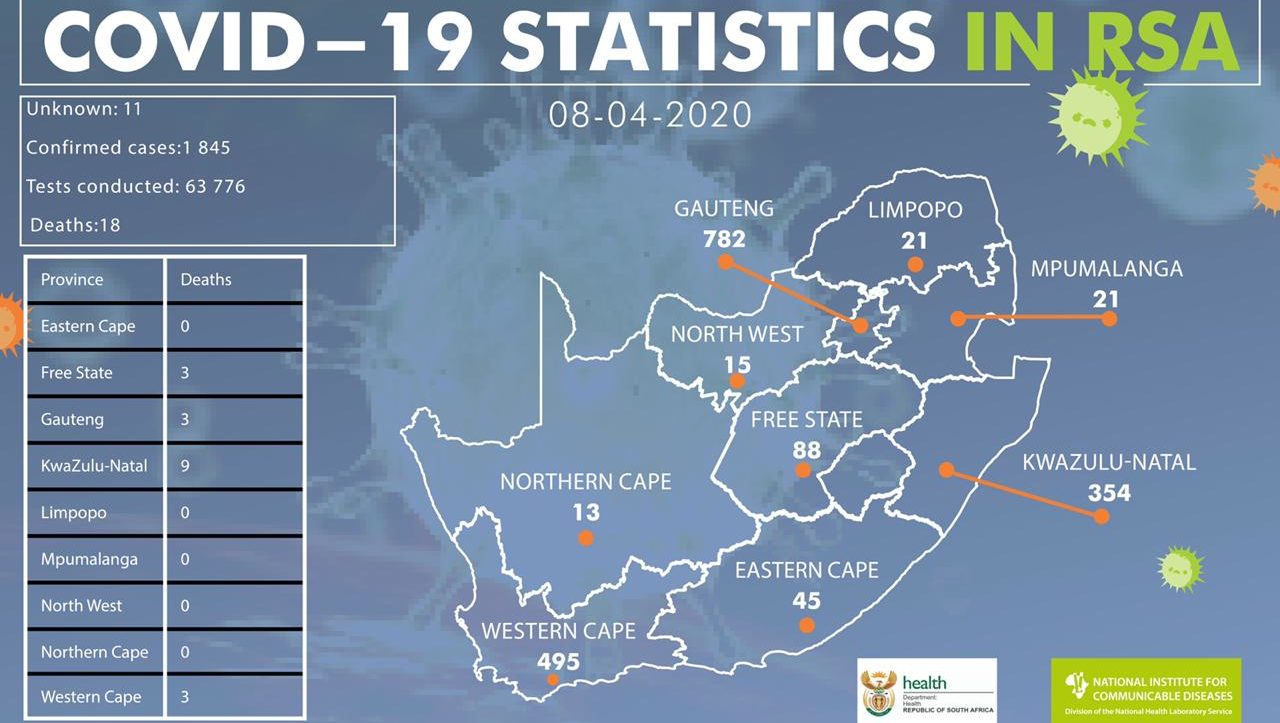 Most of the Covid-19 numbers we have paint only part of the picture and can easily be misinterpreted. Here are some tips on understanding the numbers.

Every day, Minister of Health Dr Zweli Mkhize provides the total confirmed cases and the increase in confirmed cases since the previous day. But how much can we really tell from these numbers?

Confirmed cases are only a fraction of the total cases in the country. Maybe the real number of cases is twice or maybe it is 10 times the reported cases; we simply don’t know. As testing scales up, the picture may become a bit clearer. Unfortunately, in the past 10 days or so the number of tests has declined from a peak of 8,066 on 27 March to 1,225 on 6 April. (Hopefully this will improve in the next few days if the government successfully rolls out the 45-minute GeneXpert testing machines.)

Similarly, it can become easier or harder over time to know who to test. Most of South Africa’s early Covid-19 cases were people travelling back from overseas, where they probably contracted the virus. It made sense to focus testing on people with Covid-19 symptoms and who had travelled to affected countries. South Africa’s travel ban came into effect on 18 March – effectively turning off this source of new infections. Now, as recent overseas travel has become a less important indicator of possible infection, it is becoming harder to know who to test.

All this probably explains why the daily increases haven’t been that high in recent days. Every day from 23 to 27 March over a hundred new cases were reported in South Africa – from 28 March to 6 April the daily increases were under a hundred. Apart from all this, there will also be random fluctuations in the data. By chance you may find 80 confirmed cases one day and 60 the next. In itself a decrease in confirmed cases like this means nothing. For all these reasons it’s best to be cautious about how you interpret day-to-day changes in confirmed cases.

Calculating the death rate is not as simple as dividing the number of deaths by the number of cases. For example, as of 7 April, 13 deaths in 1,749 cases were reported in South Africa – giving a death rate of 0.74%. But it is much more complicated than that. For one thing, most of the 1,749 people confirmed to have Covid-19 on 7 April were still infected and some of them may still die.

The death rates usually quoted in the media, and those above, are case fatality rates (CFRs): the number of deaths divided by the number of cases (multiply by 100 to convert to a percentage). Since the CFR only uses known cases and known deaths, it is heavily influenced by how well our Covid-19 testing and cause of death systems work.

The UK CFR rate is extraordinarily high, over 10% at the time of writing. Germany is only at 2%. This tells us more about how widely each country has tested for the virus than about the deadliness of the virus in the two countries. The UK has left wide-scale testing very late.

Testing differences between countries have been well reported, but accurately tracking Covid-19 deaths (the other part of calculating CFR) is also not straightforward. The Economist reports that in parts of Europe the number of expected deaths over the past few weeks has increased dramatically, and not all of these deaths have been attributed to Covid-19. This could suggest people are dying of Covid-19 without being diagnosed with it (perhaps even at home), or that Covid-19 is putting so much pressure on health systems that people with other health problems who would normally be saved by the system are dying. It will be a while before we understand this properly.

While some differences in CFR are about how well cases and deaths are being measured, there are also real differences between how deadly Covid-19 is in different settings. Countries with older populations are likely to have more Covid-19 deaths. But so might countries with younger populations but poorer health systems or less healthy populations. Treatment capacity also matters because people who may otherwise be saved might not be saved if the capacity to provide intensive care is not available.

How infectious is the coronavirus that causes Covid-19?

We don’t know. But the available data suggests this is a very infectious virus. At the beginning of the epidemics in China and Europe the average infected person was infecting at least two, maybe even three or four other people before recovering or dying. And they in turn were infecting two, three or four people. This resulted in the epidemic growing very quickly.

What we need to do to wipe out the epidemic is reduce the average number of times an infected person infects another person to below one. Then the epidemic will fade away.

The rate of new infections depends on three things: how many people the average person comes into contact with daily, how long people remain infectious, and how easily the virus transmits between two people in contact.

Let’s say you are infected and you come into contact with 10 uninfected people daily and the risk of infecting any one of them is 5% (these numbers are completely made up; we have no idea what they really are). Multiply these two numbers together and you get the risk that you infect any one person a day is 50%. If you are infected for four days, you will infect two people (it’s more complicated than that in reality but this is close enough).

The point of the lockdown is to reduce the average number of people we come into contact with. If the same person, instead of being in contact with 10 people a day is in contact with only two per day, then over four days that person might not infect anyone.

The point of getting people to wash their hands often and reducing how often they touch their faces is to reduce the risk of infection per contact.

If we reduce both the number of contacts and the risk per contact enough, we may bring the epidemic under control. DM/MC

Low is pursuing a PhD in infectious disease modelling at the University of Cape Town. Geffen is the director of the Centre for Science and Technology Mass Communication at Stellenbosch University. This article is co-published by Spotlight and GroundUp.