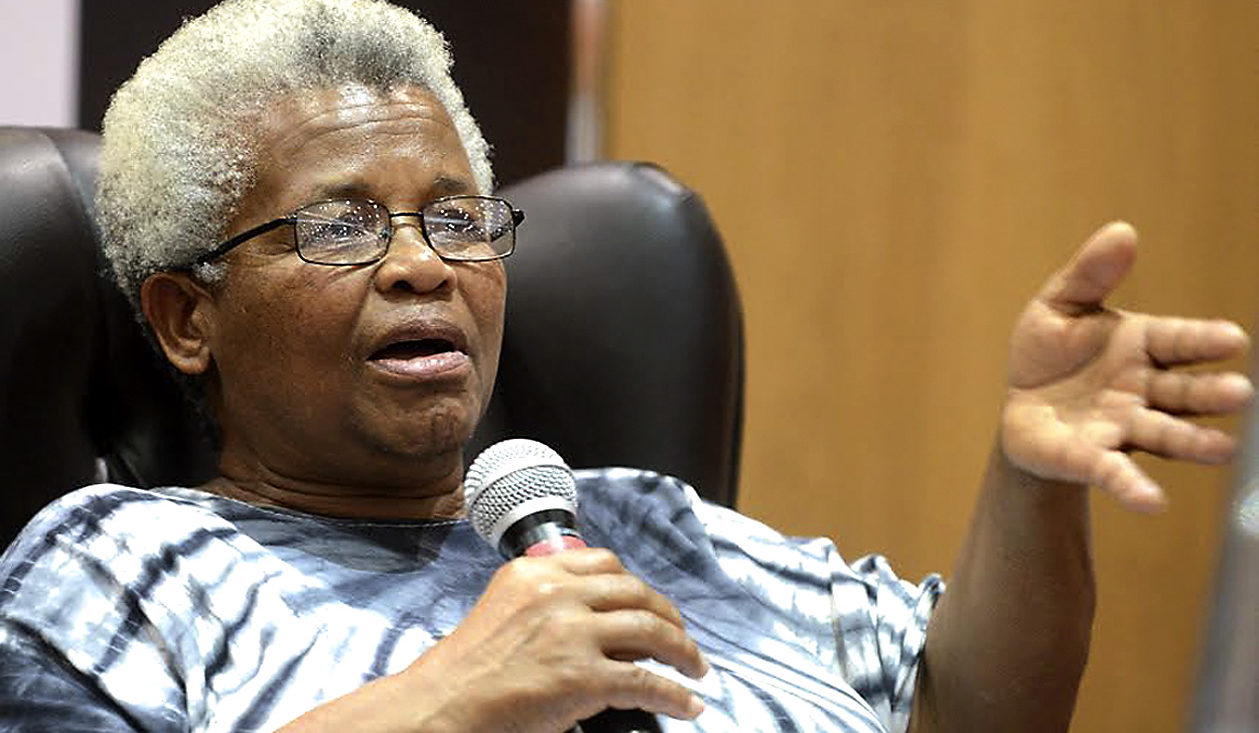 On video, the founder of the Rural Women’s Movement, Sizani Ngubane, talks about her passion for human rights with a twinkle in her eye. Due to the Covid-19 lockdown, this Maverick Citizen interview takes place virtually. Her voice is comforting. Which is probably not how KwaZulu-Natal traditional leaders would describe her as she has been a thorn in their side for the better part of her life.

When it comes to human rights, specifically women’s rights pertaining to land, Sizani Ngubane is a formidable force and has been fighting for their recognition for more than five decades.

Ngubane was born in 1946 in the KwaZulu-Natal village of KwaMpumuza in the uMgungundlovu District. She was raised by her mother, a domestic worker who earned R8 a month while her father worked in Johannesburg as a migrant worker.

“I got drawn into the world of women/girls’ land, property and inheritance rights after witnessing my mother’s forced eviction from her marital home by her brother in-law. My father was away working in Johannesburg. After being forcibly evicted from her marital home she was not able to take her own household goods – because our lives were at high risk of being assaulted.”

She says they were forced to live with an aunt and to get some land to build a home of their own, her mother had to ask a male family member to apply on her behalf. “He came home all the way from Johannesburg and the traditional leader allocated/registered a piece in his name. I knew this was unfair and promised myself that when I grow up, I would do something to help stop this harmful cultural practice.” she recalls.

Growing up in apartheid South Africa, she says the activist fire within her was further stoked by hearing about the exploits of liberation fighters in exile, as well as the horrific daily butchering of black people at the hands of the then Rhodesian leader Ian Smith. “Those are the kind of violations of human rights that motivated me to join the struggle of Human Rights defenders” she says.

On asking her about the challenges she has experienced she says:

“My biggest challenges started in 1980 when we had to run away from KwaMpumuza where our lives were at high risk of being attacked for being suspected of being members of the ANC: the whole family moved to Ngwelezane Township in Empangeni in northern Natal.

She says she has endured intimidation by the police, politically motivated burglaries at her home and physical assault by armed gunmen.

Asked about the Rural Women’s Movement (RWM), she says:

“The Rural Women’s Movement was initiated in 1990 and officially launched in November 1998 by 250 women and some girls. The Commission on Gender Equality, Commission on Human Rights and the Centre for Applied Legal Studies based within the Wits University were represented.

“RWM is made up of a coalition of 501 community-based organisations and some groups of orphaned and vulnerable girls and some boys – with a membership of approximately 50,000. RWM demonstrates integrity and commitment in defence of Human Rights enshrined in International Human Rights Law.”

Ngubane says: “The RWM envisions a democratic country where all indigenous women/girls become self-sustaining and remain well-recognised in their respective communities, well respected and truly empowered… The main girls and women’s rights issues that RWM works on are Gender-Based Violence, climate change/environmental justice, women/girls land, property/inheritance rights and influencing and effectively participating in the country’s policy-making processes both at provincial and at national levels.

“The domestic legislations and laws passed at provincial and national levels are, at best, not implemented, when not openly discriminatory towards women and girls’ independent rights.”

A very bold position to hold in the rural areas, but what do the men in her community think about the movement?

Recently RWM was embroiled in the very high-profile Ngonyama Trust (under the sole trusteeship of Zulu King Goodwill Zwelithini) case. The matter first went to court on 6 November, 2018, when the Legal Resources Centre filed a case at the Pietermaritzburg High Court against the trust on behalf of the RWM/CASAC and seven informal land rights holders for coercing and forcing people to convert their Permission to Occupy certificates into 40-year leases.

The High Court hearing was scheduled for the 22 November 2019, but was postponed at the 11th hour when KZN Judge President Achmat Jappie decided that the matter should be heard by a full bench of three judges over a period of two days because of the seriousness of the issues.

It was subsequently rescheduled for 25-26 March 2020, but because of the Covid-19 Lockdown a decision was taken to postpone.

You cannot speak of the rural women’s land rights without invoking the recently passed Traditional and Khoi-San Leadership Act (TKLA) and Traditional Courts Bill (TCB), which I asked her to share her thoughts on.

“Taking into consideration the heart of the RWM human rights work, RWM sees both these pieces of legislation as repressive and that it will give the traditional leaders more power to discriminate against women/girls and treat the rural communities and individual families with an iron fist. RWM finds it hard to figure out the difference between these two pieces of legislation and the apartheid laws – both will affect the lives of millions of people residing in the marginalised and isolated rural areas”. On the TKLA she said it “allows traditional leaders to make decisions about the land without having even consulted people residing on the land”.

She stated that the likely impact of this is that “vast pieces of land will be leased to mining companies, polluting our environment and not benefiting the communities”.

“The communities of uMkhanyakude district between Mtubatuba and Hluhluwe are saying about 85% of the people who are bedridden or attending clinics/hospitals or passing – they pass away as a direct result of respiratory or lung-related diseases. Women have dumped the old culture of rain-water catchment because their roofs are always covered with thick black dust from the coal-mine.

“The livestock is dying because its grazing land is always covered with thick black dust. The communities have run out of water because the mine diverted the Umfolozi River into the mine and when the women followed Umfolozi into the mine – the authorities locked them out.

“Their houses are cracking when the mines are blasting the rocks and the members of the communities are not compensated and are not employed by these mines. I know of a community which was promised that if they relocate, they will be compensated but they were only given R7,500 after they had relocated. According to the Ingonyama Trust Act of 1994 these mining companies are supposed to be benefiting their communities – but even the royalties are not benefiting the communities.”

Asked about winning the Martin Ennals Awards at the beginning of 2020, Ngubane says:

“It created space for RWM work to be promoted not only at national level but also at global level.”

On her challenges as an activist:

“I have been defamed… arrested for allegedly breaking into my own house… I have been beaten up and nearly lost my life after a group of men broke the door on a farm and left me thinking I was dead. I hear some white people saying they are attacked on farms because they are white – I was nearly killed on the farm but I’m black.”

Yet she keeps going:

“I get motivated by seeing the smiling faces of women who have lost hope that we will ever win our struggles”.

I ask how Covid-19 has impacted on her community.

“The RWM’s biggest challenge is that in most communities in districts like uThukela, uMkhanyakude and uGu – just to mention a few – women do not have access to clean water. In areas like uThukela District we are working with women who get up at 12-midnight to go to what used to be a stream – dig holes in the sand and wait for the water to come up.”

With the lockdown, she is concerned that it is going to be very tough for women to protect themselves from the virus and get enough food for their families.

Sizane Ngubane may be 74 years old, but the flame of activism still burns undeterred within her. The rural women of South Africa are indeed fortunate to have her on their side. MC