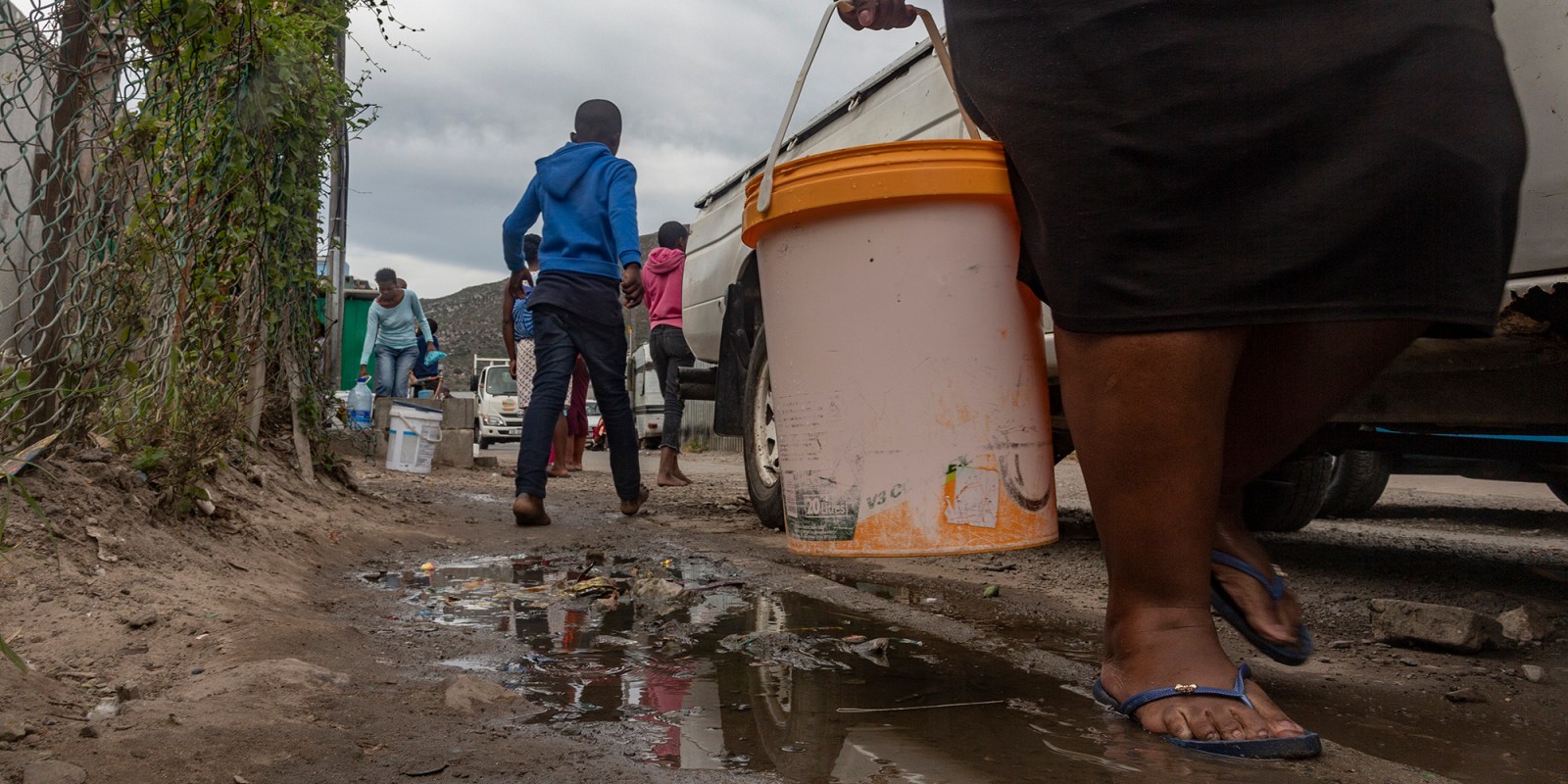 A woman takes a bucket of water to her shack after filling it at a public freshwater supply adjacent to a polluted canal in Masiphumelele, Cape Town. (Photo: EPA-EFE / Nic Bothma)

Yesterday morning I did my first stint as a volunteer driver in Masiphumelele near my home on the Cape Peninsula. My job is to drive a carer from Living Hope, a local NGO, as she delivers monthly chronic medication to outpatients in the township. This is so these people, especially vulnerable to Covid-19, don’t need to go to False Bay Hospital during the lockdown.

We threaded through the teeming – yes, teeming, I’ll get to that later – streets of this settlement of around 40,000 people squeezed into forty hectares, and while the carer did the deliveries I sat in my car and waited, keeping a watchful eye over the meds. This gave me a lot of time to observe the goings-on, this 12th day of lockdown, in a dense urban setting.

Consider those numbers: they mean that in Masi there are one thousand people per hectare, or four hundred per acre. What I saw, first of all, is that it is simply impossible to practise physical distancing amid such density. This is particularly true for the 10,000 or so residents of Masi who live in the Wetlands informal settlement, where in some sections there are two hundred people per tap and five toilets shared between six hundred people.

But everywhere in Masi people live on top of each other. Householders generate much-needed extra income by renting out sections of their property to tenants desperate for an urban foothold, no matter how small, drafty or tenuous.

“Is this quiet, or busy, for Masi?” I asked my companion, a local, sitting in the back with the meds, as we edged along a street. All around us were groups of young women walking arm in arm, groups of men smoking together on corners, schoolboys kicking a ball about, people clustered outside spazas; everyone, seemingly, on the move.

“Not quiet,” she said, drily, and we spoke about how lockdown meant that everyone was at home: kids from school, working people from their jobs. Masi was as busy as ever – not least because people felt they needed to stock up before the Easter weekend, and sign up for Covid-19 relief initiatives.

In two places, crowds gathered in unusually large numbers, clustered together in ways which defied the point of physical distancing. Both gatherings were, I discovered, a consequence of the lockdown.

Outside the clinic, a group of about thirty people pressed tightly around a man who seemed to have something they needed. That something, I was to discover, was access to the clinic itself, which had implemented a policy of allowing only two in at a time. Here was an example, then, of how through attempting to increase physical distancing inside the clinic, officials were actually decreasing it outside. There was no attempt, by anyone I could see, to organise the waiting people into a well-spaced line.

I watched a patrolling police van crawl by and do nothing about it.  It was the second time I saw a van (maybe it was the same one) during my four hours in Masi. The first time, it was parked while an officer – his mask hanging, as so many do, around his neck – was writing something out, a fine perhaps, while people milled around the stationary vehicle. When one passer-by muttered something in contempt, I thought of Jonny Steinberg’s insight in his book Thin Blue: policing is a contract between the law and the people; both have to believe in its worth.

Somewhere else in Masi, something more disturbing was going on. Two lines of close to a hundred people had materialised, on both sides of a narrow street, to register or apply for what I was told by a passer-by was some kind of Sassa relief. Because I did not have my journalist hat on, and the carer (correctly) did not want me to linger, I could not find out more, but perhaps it was linked to Sassa’s announcement that it would be giving food parcels to those whose grants had lapsed due to the lockdown.

The passer-by was distressed: he was Zimbabwean, but the lady with the notebook – I spotted her in the crowd, struggling to keep order – would not take down his details as he did not have a South African ID. He too had a child at home who was no longer getting school lunches; he too wasn’t working; he would go home to Zimbabwe, he said, if only he could. What was he to do, he asked me, a white man in a car?

I had no answer for him. All I knew, for certain, is that the lockdown was generating crowds and there were no attempts by anyone to regulate them.

We drove to our next drop-off, around a pile of uncollected garbage (was it always there?) and past a shiny white Mercedes, a gleaming statue in a shabby town square, being buffed by a group of young men listening to kwaito. I wondered at the contradictions of our country.

Here I was, delivering free medication from the state to poor people in an initiative between a diligent government hospital and an excellent NGO, one designed to keep people at home. It told me what South Africa was capable of; what works in this country. It reminded me that, in the best ways, we are a welfare state, and that in the best ways too, we work together. And yet in the same ecosystem, at the same time, there was chaos, an epidemic’s best friend.

Where were the street committees, I wondered, and why weren’t they taking matters into their own hands? I knew some of the answers, of course: vigilantism has a bad track record in South Africa, and who wants to risk a fight to get people to do something that is not manifestly in their own interest? But why no marshalls at those clusters of people? And where were the trucks with megaphones blaring social distancing messages?

“Wamkelekile!,” one man shouted enthusiastically, to me, from a particularly overcrowded yard, as my companion handed over a parcel of medicine to an elderly relative. “I had a dream about you last night. I knew you were coming today.”

At the next stop, I had a chat with a couple of men at a street corner while the carer went in search of a parcel’s recipient. The men initiated the conversation by complimenting me on my mask – and noting, probably correctly, that I was the only person in Masi wearing one. Where did I get it, they wanted to know. And should they be wearing one too?

We had a chat about it, which confirmed that they were well informed. They had no masks, they told me, but an organisation had handed out small bottles of sanitiser earlier in the week.

Did any of them have the bottles on them, I asked? They shook their heads.

I felt the unnerving echo of the Aids epidemic, in one crucial regard, confirming something I have written before. As with Aids, public health messaging around behaviour change – even when stipulated in lockdown regulations – is hard to absorb or act upon when you are poor or disempowered; harder, still, when you don’t see the effects of illness all around you. And by the time you do see these effects, it’s too late.

The men and I had a good chat. We laughed a little, as one does, and they spoke of their fears: financial, not medical.  But the feeling I got from them was clear. It was as if I was from another planet.

If this was their impression they were not wrong, I thought, as I drove home to Kalk Bay through the silent and empty suburban streets of Fish Hoek. Never have I felt, so acutely, the truth of South African society. We are indeed two worlds. DM/MC

Living Hope is an NGO which has been working in the disadvantaged communities of the south of Cape Town for the past 20 years. In addition to its normal work, it has also taken on the distribution of chronic medication to around 120 a day in Masi, Ocean View and Redhill. Its farm is planting over an acre of vegetables to be given away when the hunger crisis hits, and it is also co-ordinating NGO food relief efforts in Masi. For more information, go to www.livinghope.co.za, or contact [email protected]

Mark Gevisser’s next book, The Pink Line: The World’s Queer Frontiers, will be published later this year. His other books include Thabo Mbeki: The Dream Deferred and Lost and Found in Johannesburg: A Memoir.