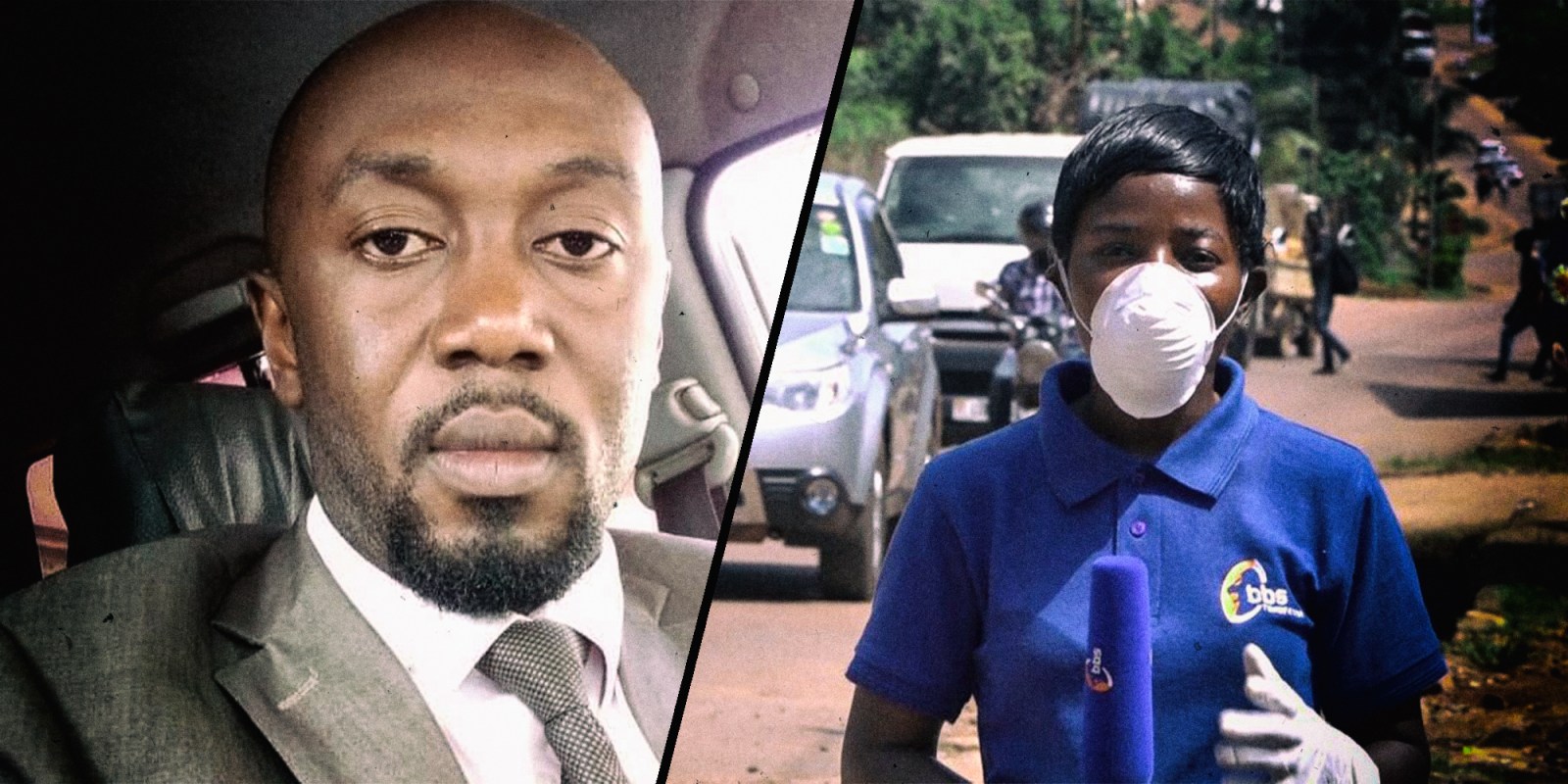 The global number of cases of Covid-19 is rapidly approaching 1,3-million. By the end of the first week of April, more than nine thousand deaths had been reported on the African continent. With many countries in lockdown, journalists are finding new challenges in keeping people informed about the spread of the pandemic.

Five African journalists spoke to Daily Maverick about their experiences and observations during these trying times. In part one of the series, we look at how the coronavirus has forced journalists to adapt to unprecedented circumstances.

The coronavirus began its deadly spread across the continent on 14 February when Egypt recorded its first case – a traveller who had entered the country from abroad. Just over two weeks later, South Africa recorded its first case. However, it wasn’t long before the country reported having the leading number of confirmed cases on the continent. To date, South Africa has completed 63,776 tests, of which 1,845 people tested positive for Covid-19. There have been 18 deaths and 95 recoveries.

Uganda is among the countries with the fewest confirmed cases of Covid-19 in the world –  just 53 so far. The country has completed 3,310 tests and has not recorded any deaths related to the virus, according to the Uganda Virus Research Institute.

Wycliffe Sebunya is a Ugandan journalist at one of the country’s premium FM radio stations, Radio One.

“Uganda registered her first coronavirus case on 21 March and this was a Ugandan trader returning from the United Arab Emirates where he had travelled for a business trip,” says Sebunya.

Sebunya says most of the cases in his country have been imported from countries such as the United Arab Emirates (UAE), the United States (USA), the United Kingdom (UK) and Afghanistan.

“Uganda was among the last countries in the East African region to record a Covid-19 case,” he says.

“So before registering the first case, the government had kickstarted a sensitisation campaign spearheaded by President Yoweri Museveni.”

According to fellow Ugandan journalist, Culton Skovia Nakamya, the local government had, before the first case was even reported, begun classifying countries by the number of cases recorded, with Category 1 being the high-risk countries.

Nakamya, who has worked in the media since 2013, is a broadcast journalist at BBS Television. There, she keeps the nation informed in the local language, Luganda. She says part of the government’s interventions that preceded the nation’s first case included individual and institutional quarantine of those who had travelled to high-risk countries.

The Ugandan government was proactive in taking stringent measures to reduce the risk of citizens spreading the virus unknowingly.

“As the cases increased, government took more drastic measures including banning all flights and travel by road in and from the country, with the exception cargo,” says Sebunya.

“Government banned public transportation which includes taxis and boda bodas (motorcycles that ferry people) [and] upon reaching 33 cases, government announced a total lockdown for 14 days to stop the spread of the disease,” adds Sebunya.

For BBS television journalist, Culton Nakamya, the new regulations have posed some challenges in her ability to fulfil her occupational duties.

Addressing the nation of more than 45-million people on 30 March, President Museveni said, “It is better not to take any risks by being complacent and assuming that everybody took heed when many may have not taken heed.”

Museveni announced that only essential services would be allowed to operate during this time. For Nakamya, whose profession is considered essential, the lockdown and curfew presented new difficulties in performing her duties.

“I work for television. We have two news bulletins that run in the evening, one at 7pm and one at 10pm. But according to the regulations, the curfew starts at 7pm,” she says.

“The security officers disturb us when we’re going back home. They say you guys are supposed to close at 7pm or else sleep at your workplaces. As much as we really need to abide by the regulations, we also need to disseminate information … some regulations are really not favourable to us.”

For many like Nakamya, who work in the media industry, working from home is not a viable option.

“I should say working from home hasn’t been easier given that some people lack what is required,” says Sebunya.

“For example, access to the internet is costly given that one has to pay OTT – a form of taxation to access the internet – and this has made work pretty hard.”

Others, he says, do not have the necessary equipment to work from home and have to rely on office-based resources such as computers and other electronic devices. Unreliable electricity supply also poses a challenge for those who are work from home.

Both journalists confirmed that their workplaces had provided them with the necessary gear to protect them on the job.

“Many media houses have adhered to the guidelines put in place, like providing sanitisers and limiting the number of visitors who access the offices or studios,” says Sebunya.

“At my workplace, every employee was given a face mask, sanitisers and windshield for whoever goes on air as part of the precautionary measures.”

On the other hand, Nakamya’s work requires her to come face to face with people every day. She is provided with a mask and gloves to use when interviewing people in the field.

“I take the necessary measures to protect myself. For instance, before I go into the field I make sure I sanitise, I make sure I wash my hands and then I put on my gloves. I make sure I have a mask,” she says.

“I know that if I, the health reporter, gets infected, the whole TV station will get infected. And not only whoever works at the TV station, but their families and all their relatives might also get infected,” she adds.

On 31 March, Ugandan news site, Daily Monitor, reported that the family of a man who tested positive for Covid-19 has been living in fear after receiving numerous threats from residents. After his test results were confirmed, the 55-year-old resident of Kibugubya village in Western Uganda was transferred from the regional hospital to Mulago referral hospital for further treatment. However, this did not quell the fears of residents who responded to the news by threatening the man’s relatives.

According to Nakamya, incidents such as these have resulted in a newfound difficulty in accessing information. He says the department of health has since begun taking extra precautions when it comes to information concerning the coronavirus.

“Every channel where you could find some or other information has been locked. We access information only through [the Minister of Health] right now,” says the television news anchor.

“We know sometimes the government might not be telling the gospel truth. For example, the number of Intensive Care Units available in the country. I know very well that we have very, very few ICU beds.”

A February 2020 academic paper reported that of the 55 beds in Uganda’s 14 ICUs, only 12 were deemed functional. However, on 18 March, senior public relations officer at the health ministry, Emmanuel Ainebyoona, told All Africa that the country has “slightly above 90 ICU beds”.

It is of paramount importance that journalists are able to keep citizens informed without finding themselves at the mercy of the country’s under-equipped health system.

“At the end of the day, it’s the ‘Haves’ and the politicians who have the privilege of getting proper treatment, mainly from abroad. Now, with borders closed, they have to bear the situation with the rest of us,” he adds.

Nakamya echoes this saying the coronavirus has presented an opportunity for the government to upgrade the country’s healthcare system.

“Our health system was not functioning very well because the high-end class of people could simply fly out and get VIP medical treatment. But now you have to go to a government health facility, which you were not funding very well.”

Uganda has not yet reported any infections among its ruling elite. Should this ever happen, it might provide the government with fresh impetus to improve the country’s health services. DM