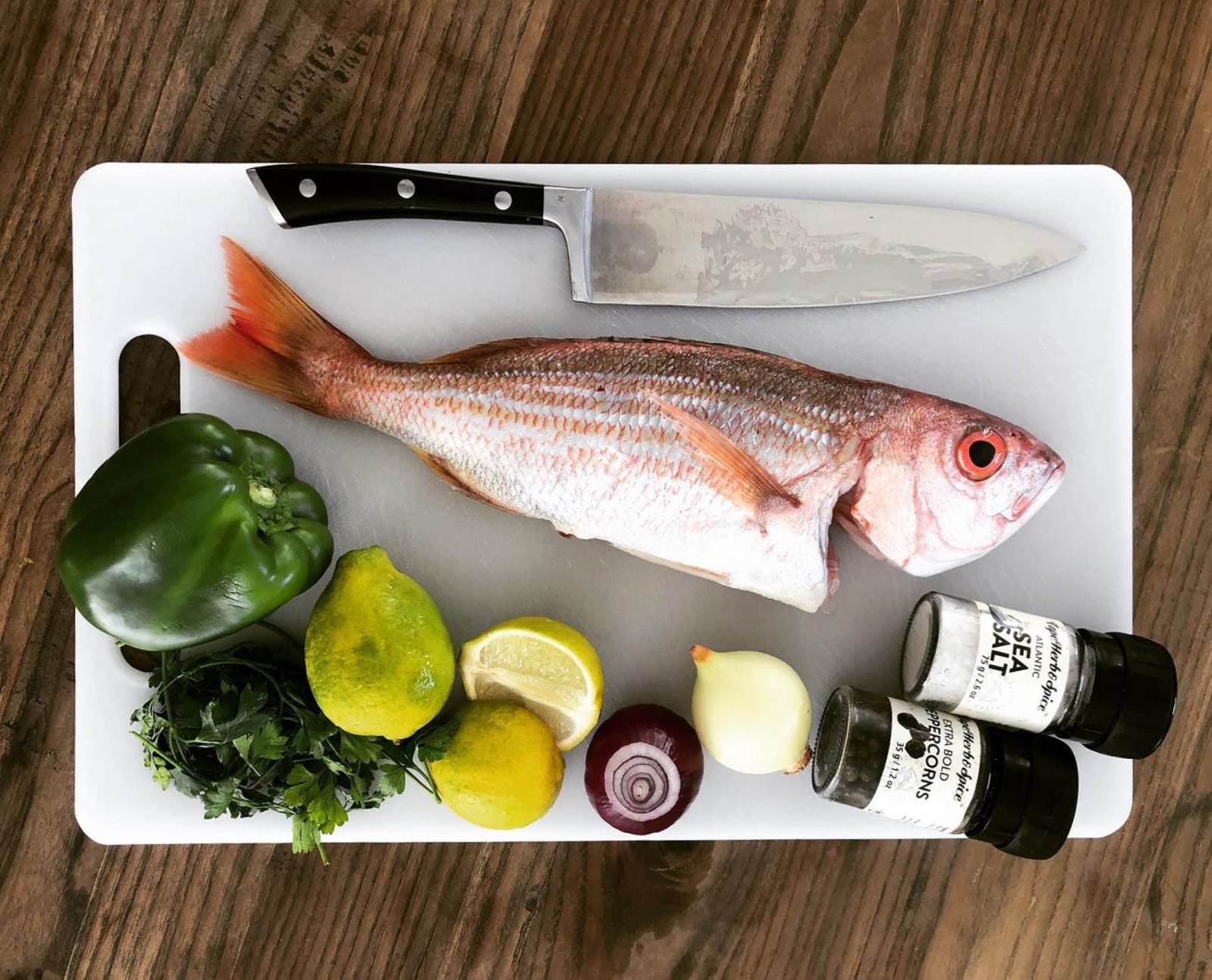 Until the restaurant trade came to a brutal halt in late March, small-scale fishing initiative Abalobi was facilitating the supply of traceable responsibly caught fish from traditional fishers to chefs at more than 350 Cape Town restaurants. The impact of Covid-19 has meant a quick pivot to home delivery to maintain a basic income and stimulate food security initiatives for traditional fishing families.

“For us as fishers, it was a big moment when Covid-19 arrived,” says Nico Waldeck, Abalobi’s Community Engagement officer for Lamberts Bay. “If you’re not allowed to fish, it means you’ve suddenly cut off your income, and it is not only you; it’s your household.”

Lamberts Bay is one of a few coastal communities in which Abalobi has become a lifeline for fishing families. Through Abalobi’s accessible suite of apps developed cooperatively with community members, fishers can better check weather conditions and more accurately plan their trips, log catch, make financial reports and, since the introduction of Abalobi Marketplace two years ago, sell their catch to restaurants, without the drain of middlemen.

In 2019, Abalobi Marketplace made sales of R4,5-million in fish to restaurants, while more than 350 fisher families reaped the benefits, earning up to four times more than they had prior to the initiative – a real living wage, for the first time in their lives. It’s a remarkably successful programme, with chefs only too happy to pay a fair and transparent price with a logistics fee in order to get the freshest catch available with 100% traceability.

When restaurants began closing their doors in mid-March, Abalobi continued working with its few restaurant customers who had pivoted to home delivery. But after President Cyril Ramaphosa’s national lockdown speech, Abalobi founder Serge Raemaekers and his team had to move quickly. “We went back to the financial models. We had to make sure home delivery would be realistic, would cover our costs and, most importantly, give us a little extra leverage to subsidise a similar model operating simultaneously in a fishing community.”

That model is the Community Supported Fishery (CSF). Fishers fishing for the urban home delivery model can now afford to keep some of their catch for local deliveries within their own communities, offering fish locally at what could be regarded as a heavily subsidised affordable price. The idea is that ultimately there will also be some interconnectivity between communities: for example, an overabundance of snoek from Lamberts Bay can make its way to fishing families in Struisbaai, while yellowtail can be trucked back to Lamberts Bay using the Abalobi logistics system.

At the end of March, Abalobi introduced its home delivery service to Cape Town and its Southern Suburbs, and within several days, it had expanded the delivery area to include most suburban areas.

Online ordering is simple with great communication at every step of the process, through the Abalobi Marketplace app and a parallel WhatsApp group. After downloading the app on my phone and checking out the available catch of the day the morning of the first day of deliveries, I ordered some Cape bream, an underappreciated and underfished species that has been inspiring local chefs like Kobus van der Merwe of Wolfgat, Kerry Kilpin of Bistro 1682 and Bertus Basson of Overture Restaurant: all passionate supporters of Abalobi.

A couple of hours later, after an online confirmation of my order was processed and I paid via the app, an emailed receipt arrived with a QR code, which informed me that my bream, now in transit, had been caught by fourth generation fisher Wilfred John “Wilow” Poggenpoel from Lamberts Bay, who has been fishing for nearly 40 years. I learnt that Wilfred owns and skippers a traditional wooden two-person “bakkie” boat called Nadine, named after his youngest daughter, from which my bream was hand-line caught the previous afternoon. And that Cape bream (Pachymetopon blochii) is an important species in a variety of smaller-scale fisheries along the western and northern Cape coasts. It is traditionally caught by line fishers as part of a basket of species they rely on for their livelihoods.

Soon after, driver Justin van Belkum arrived, suited up like he was about to enter a medical facility… except for the shorts and white plastic boots. Maintaining a safe distance outside my front gate, the fish, in an icy slurry, was transferred from his cooler box to mine. The bream was clear-eyed and beautiful and the whiff of fresh sea that splashed my face reminded me that there was still an ocean out there beyond my gate. All Abalobi fish for home delivery are scaled and gutted, but left whole, in part for hygiene reasons (to minimise handling) as well as to save time. To help filleting novices, Abalobi’s champion chefs have been posting popular videos on social media about how to fillet a fish. Or you could just cook them whole, like I did.

That night, I stuffed the four Cape bream with leeks, lemon and fresh herbs and roasted them. The leftover fish was flaked and turned into fish cakes the next evening. Two meals for a family of four for R300.

While the fresh fish delivered to your door is a wonderful bright spot, our dining pleasure is not the only motivator behind home delivery. “We are doing this pivot because there are no social protection mechanisms in fishing communities,” Raemaekers adamantly states.

“These fishers cannot access UIF or other government support programmes. They need to fish to survive. But fuel is expensive making it impossible to just go fish for food security.” Before a fisher catches any fish, he needs to spend between R600 to R1,000 on petrol, bait and other necessities, Waldeck explains, making it impossible for them to feed their own families without a marketplace.

Adherence to strict hygiene and sanitation standards has been in place since Abalobi Marketplace launched in 2018. The presence of Covid-19 has ramped that up further. Fish is caught, cleaned and placed in cooler boxes with ice, on the boat. The boxes then get delivered to the community quality control centres: fishers (for now) do not enter these areas and the box handles are disinfected. Weighing and quality control takes place and fish is placed in crates on the Abalobi truck.

Abalobi’s QC team wears all the necessary PPE and has added security protocols on hand washing, gloves and masks. Some deliveries may be done along the way to Cape Town, but most end up at Abalobi’s Cape Town facility. There, the orders are organised by delivery area. All drivers at every stage are provided with a Lever Arch file of documents and permits. Cooler box handles are disinfected before and after every handover. Drivers arrive at the door, deliver the fish and take a photo as proof of delivery rather than asking for an electronic signature on the app.

As access to healthcare in fishing communities is minimal, it’s imperative that fishing families be protected, says Raemakers adamantly. “We have taken every precaution not to bring our Cape Town staff in contact with the fisher communities, to minimise the risk of potential contamination,” he says. “While this is hard in a programme where we have very close relations with the fishermen and women we work with and have to wave through a window or chat on WhatsApp, it’s absolutely critical.”

Since I ordered, Abalobi has added a host of pantry items to its home delivery Marketplace, like bokkoms, pickled fish and even sour fig jam, which are mostly produced by women in fishing families; another way to inject income into these struggling communities. After the lockdown, Abalobi may revert to a system it piloted earlier in 2020 of pick-up points, which allowed customers to collect their pre-ordered fish from Frankie Fenner Butchery shops in several Cape Town locations. Consumers can also buy Abalobi traceable fish at a few selected Woolworths stores; it is distributed through fish and seafood supplier Grey’s Marine.

While lost income is an obvious major concern in fishing communities, the impact of Covid-19 is deeply distressing on cultural and social levels as well; so much so that Waldeck references the inherent loss of physical connection through social distancing, before he begins to touch on the economic ramifications of lost income. “We as human beings depend so much on each other,” he says. “We want to embrace each other, but we are not allowed to. We’ve touched our food with our hands; suddenly you are scared to do it.

“In smaller communities, you see each other all the time,” he adds. “Especially fishers, we normally come together and talk about the fish, where they are biting… but we see the bigger picture. We want to support our president, our country. It’s a small step that fishers are taking, and it will support the bigger call.”

This is local, this is harrowing and an absolute necessity for our future. Says Raemaekers: “In times of Climate Change and a Covid-19 pandemic, we need to revert to hyper local marketplaces. In lockdown, a digital marketplace with home deliveries can save people and livelihoods…at least that is what we have set out to prove.” DM/TGIFood