Fighting dual infections of Covid-19 and corruption (Part One) 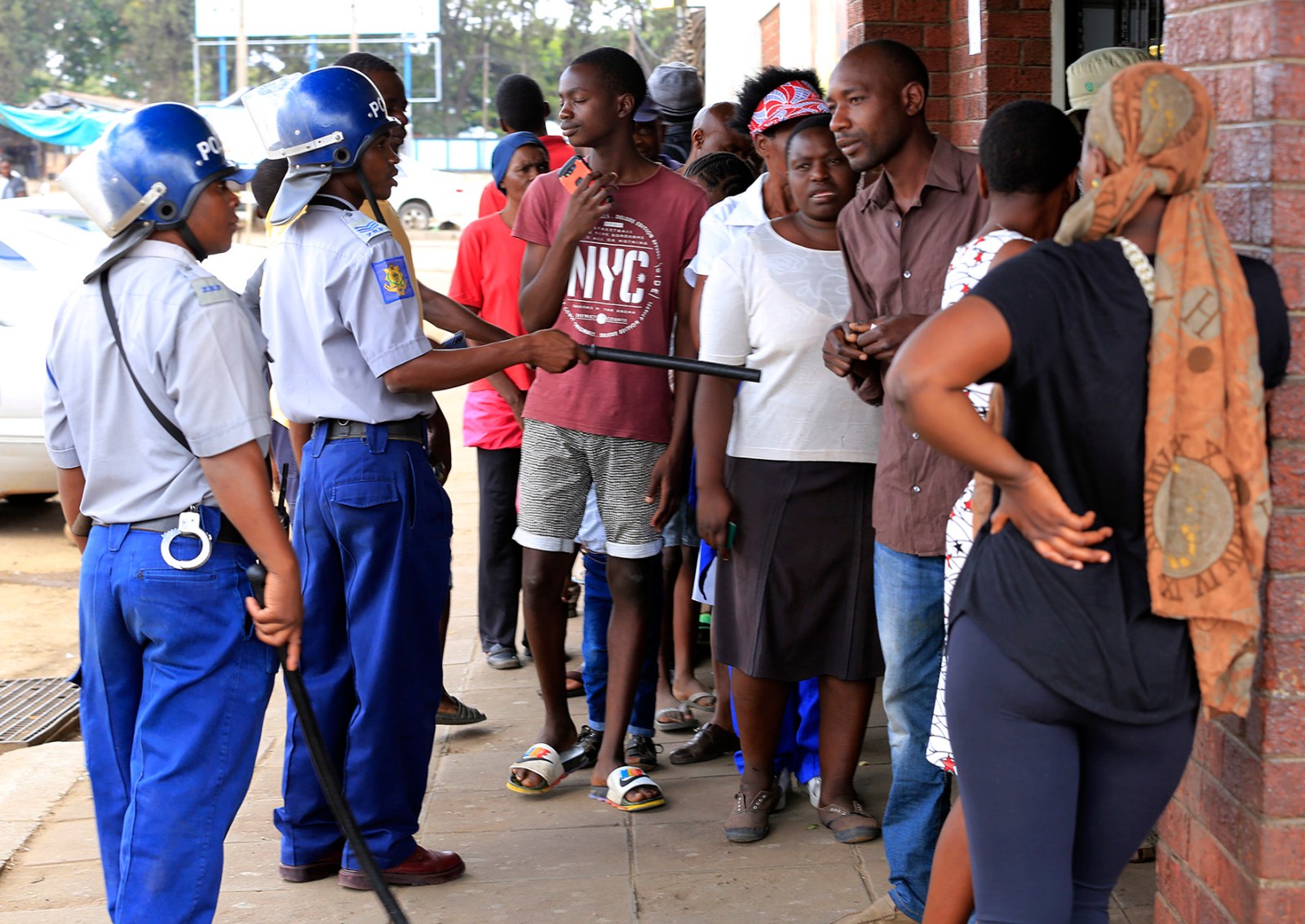 A police officer orders shoppers to maintain physical distancing as they wait to buy essentials outside a shop in Harare, Zimbabwe. (Photo: EPA-EFE / Aaron Ufumeli)

“When I heard the words ‘lockdown’ and ‘deployment of security forces’ in the same sentence, I wondered if the action was being taken to curb the spread of the virus or curb the spread of dissent,” writes Zimbabwean activist Thandekile Moyo.

When it became clear that Covid-19 would not spare Zimbabwe, attention turned to the country’s readiness to combat the deadly virus. Many feared that after years of neglect and decay, the health system was simply unprepared to deal with a pandemic of this magnitude.

Encouraged by the response of the South African government to Covid-19 – it had become clear that President Emmerson Mnangagwa was taking notes from President Ramaphosa– some believed that the crisis presented the ZANU-PF government with an opportunity to redeem itself by mounting an equally serious response.

So when Ramaphosa announced a limit on gatherings of more than 100 people, Mnangwagwa followed suit. When South Africa decided to lockdown, many hoped that Zimbabwe would do the same, despite the complications that would come with such a drastic move.

Many feared that ZANU-PF, long accused of running the county into the ground, would see this as an opportunity to steal whatever aid came their way. They also anticipated that the government would take advantage of the state of disaster and devise ways to use it to strengthen ZANU-PF and weaken the opposition.

The main reason for this mistrust and fear is that there is a dangerous conflation of the ruling party and the state in the minds of Zimbabwe’s leaders and their followers. To them, support for them as individuals and for ZANU-PF is support for the state, for Zimbabwe, and thus, an act of patriotism.

Conversely, criticism and rejection of ZANU-PF and its members and leaders is viewed as hatred for the country and anyone who speaks against the government and its actions is labelled as unpatriotic. It is for this reason that any talk of ‘regime change’ has been criminalised. Anyone who openly advocates for a change of government is branded an enemy of the state. This conflation is so deeply entrenched that arms of the state, whose mandate is to protect the state, are now used to protect ZANU-PF, which, in their minds, is the state.

Tools to prop up the state

These arms of the state have been used as personal ZANU-PF tools since independence. It was the national army’s 5th brigade that was used to kill ZANU’s opposition in Matebeleland (Gukurahundi).

It was the national army that terrorised villagers in the Midlands and Mashonaland provinces after ZANU-PF lost the 2008 elections.

It was the national army that organised the 2017 coup to solve ZANU-PF’s factional battles.

And most recently it was the army that was deployed to shoot anti-ZANU-PF protestors on 1 August 1, 2018, and in January 2019.

The fact is that Zimbabwe’s national army is unapologetically the military wing of the ruling party.

Now that Zimbabwe is grappling with a Covid-19 scare (‘scare’ because, according to our ministry of health, we still have only 11 positive cases), will this conflation of state and ruling party work for or against citizens?

Here is how the Covid-19 situation is progressing in Zimbabwe:

On the 23 March there was a press statement announcing the “establishment of the ad hoc inter-ministerial taskforce on the Covid-19 outbreak” by the president. Among the 12 ministers appointed to the taskforce was Zimbabwe’s Minister of Defence, who said at a rally that Covid-19 was a punishment from God for nations that had imposed sanctions on Zimbabwe. Seeing the minister’s name on that list had me wondering exactly how seriously the president and his government are taking this pandemic.

Add the fact that there is not a single scientist, doctor or medical professional – save for the health minister who lied about having a degree in medicine – and one can’t help but wonder exactly what this taskforce hopes to achieve.

Of note also is the fact that everyone in the task force is undoubtedly a ZANU-PF member or supporter. The president clearly believes that anyone who isn’t with the party cannot serve the state.

On 25 March the health ministry tweeted that they had received donations from Chinese business magnate Jack Ma. They said they had received 1,000 protective suits. People began querying this after reports emerged that the figure was actually 10,000 suits.

A few hours later, the ministry came back with a tweet saying: “Please note there was a typo. There’s a total of 10,000 protective suits and not 1,000.”

Muddying the waters even further, the Chinese embassy in Harare sent out their own tweet saying: “Correction: number of protective suits and face shields from Jack Ma to Zim is 1,000 not 10,000 …”

To this day, nobody knows for sure how many protective suits the government received from Jack Ma or from other sources.

On 26 March Reserve Bank Governor John Mangudya put out a press statement announcing that due to the Covid-19 outbreak, Zimbabweans were now allowed to trade in foreign exchange. This came as a surprise to many, because in 2019 the use of forex was banned in the country.

The Reserve Bank of Zimbabwe (RBZ) went on to fix the exchange rate at USD$1: ZW$25, a rate many feel is daylight robbery. Prior to the 26 March announcement, the rate was UDS$1: ZW42. The move was seen as an attempt to mop up forex from the public at a giveaway rate.

Many will be forced to exchange their money at that rate since there are no forex dealers on the streets as a result of the lockdown. The government is taking full advantage, knowing that many people are dependent on relatives in the diaspora and therefore have foreign currencies that they use to survive.

On 27 March, President Mnangagwa announced that Zimbabwe would begin a 21-day lockdown as from 30 March. In spite of concerns over food supplies and other services, many accepted that a lockdown was the best solution and it was broadly welcomed.

As part of his announcement, Mnangagwa said: “Some of the measures will be drastic and are sure to upset the daily routines of our lives. Should it become necessary, security forces will be deployed to assist in the enforcement of these measures.”

On 1 August, his administration gunned down unarmed fleeing protestors and spent the rest of the day patrolling the streets forcing people to stay at home until the election results were announced.

In January 2019, the Zimbabwe Congress of Trade Unions (ZCTU) called for a national shutdown and many people heeded the call. Some joined public protests against a shocking fuel price increase that had been announced by the president himself. The president responded by again sending the army into our neighbourhoods where they went from door to door, beating, raping, torturing and shooting Zimbabweans.

People were forced to stay at home. Not only were they physically locked down, but the internet was shut down completely during this period, allowing the army to commit unspeakable atrocities with impunity.

I found myself on a list of “troublesome internet activists” and had to flee the country to avoid whatever the army or ruling party had in store for me.

So when I heard “lockdown” and “deployment of security forces” in the same sentence, I wondered if truly the lockdown was meant to curb the spread of the virus or the spread of dissent.

It has been common practice the world over to deploy the military to help with enforcing lockdown laws, but I know from bitter experience that our army always puts the interests of ZANU-PF before the people. DM/MC

This is part one of a two-part series on Covid-19 in Zimbabwe by activist Thandekile Moyo. It will continue tomorrow in Part Two.