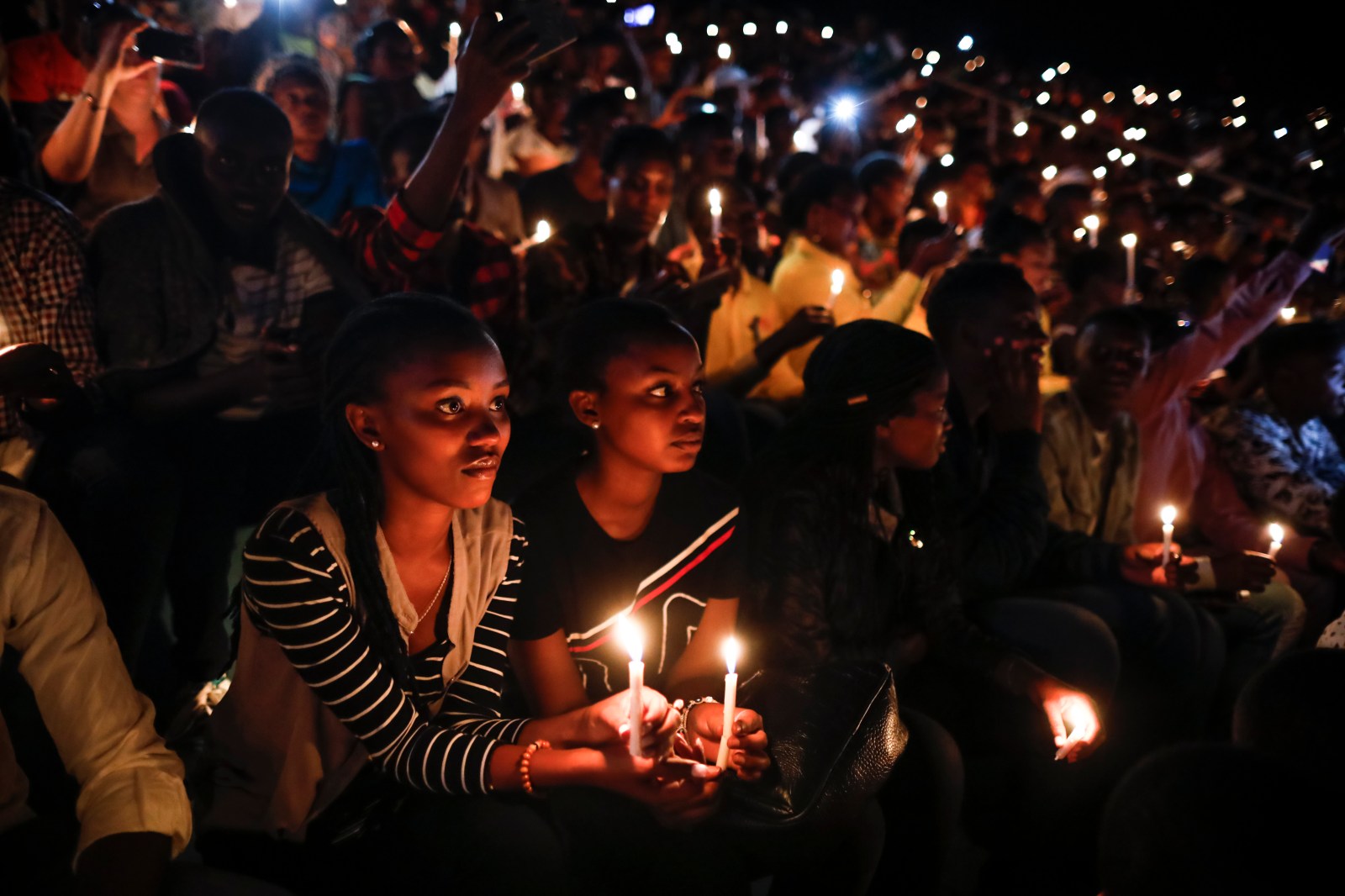 epa07490897 People hold candles during a candle light vigil for those who were killed in the 1994 genocide, during a commemoration event at Amahoro stadium in the capital Kigali, Rwanda, 07 April 2019. Tens of thousands of Rwandans gathered at the stadium to mark the 25th anniversary of the country's 1994 genocide in which ethnic Hutu extremists killed ethnic Tutsis and moderate Hutus during a three-month killing spree that resulted in, according to Rwanda, the death of more than one million people. EPA-EFE/DAI KUROKAWA

KIGALI, April 7 (Reuters) - Valerie Mukabayire lost her husband in Rwanda's genocide. Now she and her family know they need to stay strong to honour his memory as they join the country's fight against the coronavirus.

Government orders to stay indoors to curb the spread of the disease have prevented them holding a family gathering to remember Sylivestre Shumbusho, who was a teacher in Kigali, one of the 800,000 people killed in 1994.

The 64-year-old and her three children – who were aged 12, 10 and nine when their father was killed – would usually visit a memorial site. This year they will watch on television as the country marks the 100 days of slaughter.

“Even this morning my children sent me messages, told me on a WhatsApp group that we must remain strong despite tough times in a bid to honour their dad,” she told Reuters by phone about the conversation between her, her two daughters and her son.

“We survived the genocide and now we must ensure that COVID-19 does not kill us,” said Mukabayire, a former teacher who heads AVEGA Agahozo, an association of widows that supports 19,000 women countrywide.

Rwanda has 105 confirmed cases of COVID-19, the disease caused by the coronavirus. Last month it closed its borders as a part of a broader lockdown designed to curb its spread.

It has ordered its citizens to stay indoors and only go out for essential activities, and restricted movement between towns and other regions. Neighbouring Uganda has imposed curfews and suspended international passenger travel. Kenya has done likewise.

President Paul Kagame said in a recorded speech carried on the state-run broadcaster that Rwanda had to remember the genocide despite the coronavirus outbreak.

Some 800,000 ethnic Tutsis and politically moderate ethnic Hutus were killed in the violence that began on April 6, 1994, after President Juvenal Habyarimana and his counterpart Cyprien Ntaryamira of Burundi – both Hutus – died when their plane was shot down over the Rwandan capital. The attackers have never been identified.

For last year’s 25th anniversary, thousands of people marched from parliament to the national soccer stadium. After they entered, the lights were extinguished and the darkness was broken by a sea of flickering candles as survivors spoke.

This year, Rwanda started the week-long commemorations with families under lockdown and radio stations and television channels airing programmes and songs to remember the victims.

“This year’s commemoration is therefore especially challenging for survivors and families and for the country, because we cannot be together physically to comfort one another. It is not an easy thing to do,” Kagame said.

He laid a wreath and lit the Flame of Hope at the Gisozi memorial site, where more than a quarter a million of people were buried.

Authorities are still exhuming the bodies of those killed.

“We will keep searching for more bodies as people tell us that they are sure the bodies were dumped there during the genocide,” Fred Mufuluke, the governor of Kayonza province, told Reuters by phone after finding 15 buried in a dam. (Reporting by Clement Uwiringiyimana; Editing by George Obulutsa and Alison Williams)