China’s Wuhan ends its coronavirus lockdown but elsewhere one begins 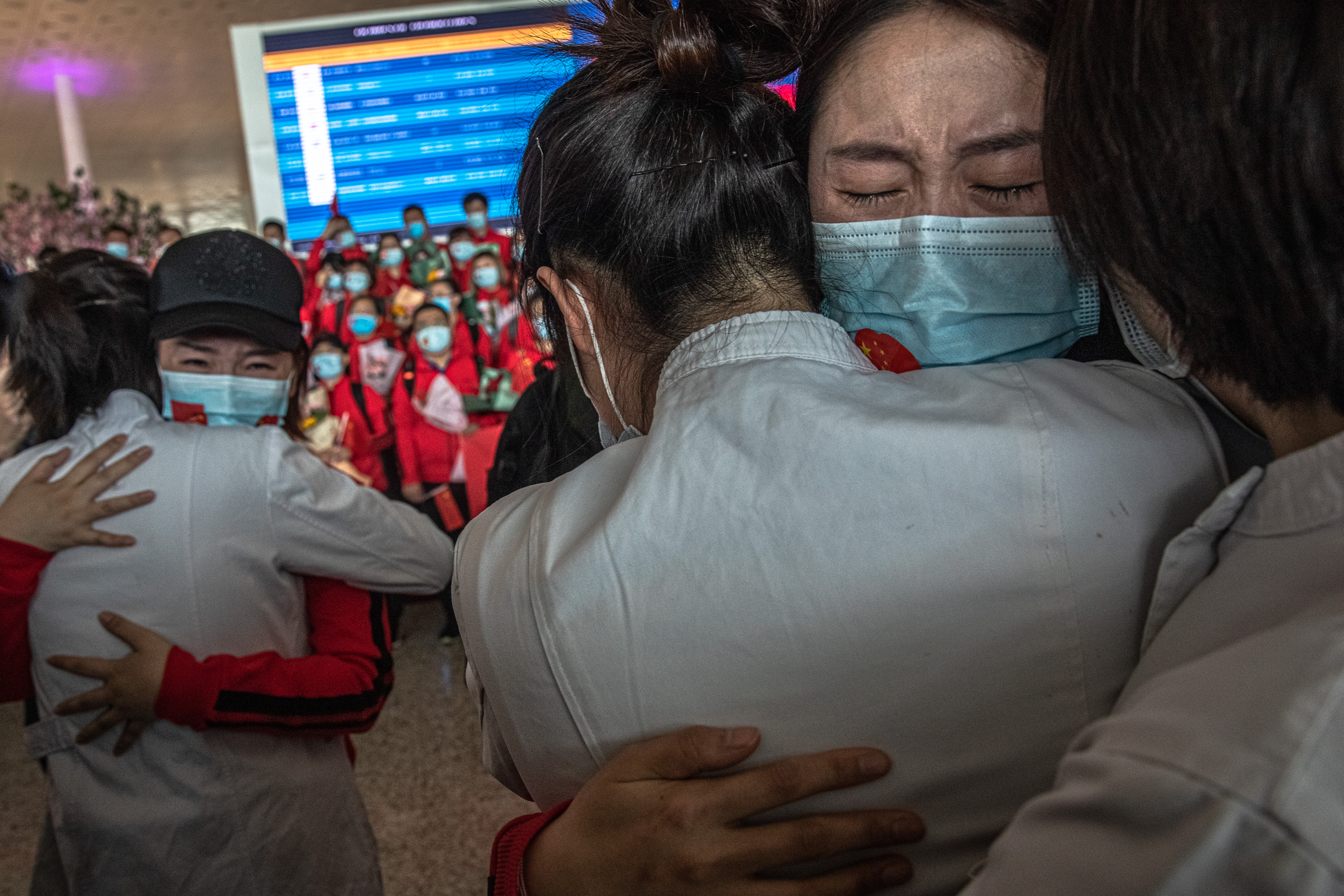 epa08349966 Medical workers from The First Bethune Hospital of Jilin University hug their Wuhan colleagues at the airport as they prepare to leave after the lockdown was lifted in Wuhan, China, 08 April 2020. Wuhan, the epicenter of the coronavirus outbreak, lifted the lockdown on 08 April 2020, allowing people to leave the city after more than two months. According to Chinese government figures, over 2,500 people have died of Covid-19 in Wuhan since the outbreak began. EPA-EFE/ROMAN PILIPEY

WUHAN, China, April 8 (Reuters) - The Chinese city where the new coronavirus emerged ended its more-than two-month lockdown on Wednesday, even as a small northern city ordered restrictions on its residents amid concern about a second wave of infections.

China sealed off Wuhan, a central city of 11 million people, on Jan. 23, a drastic step that came to symbolise its aggressive management of the virus.

More than 50,000 people in Wuhan were infected, and more than 2,500 of them died, about 80% of all deaths in China, according to official figures.

The virus has since spread around the world infecting more than 1.4 million people, killing 82,000 of them and wreaking havoc on the global economy as governments imposed lockdowns to rein in its spread.

While China has managed to curb its coronavirus epidemic the measures to contain it have exacted a heavy economic and social toll, with many residents in recent days expressing relief as well as uncertainty and worry over lingering danger of infection.

“I’m going to see my parents,” Wang Wenshu told Reuters as she waited to check in at Wuhan’s Tianhe airport, which reopened on Wednesday.

“Of course I miss them. Stop asking me about it or I’m going to cry.”

Wuhan has slowly been returning towards normal, with people officially allowed to enter the city from March 28, although restrictions remain. Residents have been urged not to leave Wuhan or Hubei province, or even their neighbourhood, unless absolutely necessary.

Shopping malls and the city’s biggest shopping belt, the Chu River and Han street, reopened on March 30. Long queues, thanks to requirements that customers stand a metre apart, have formed at supermarkets while some residents have taken advantage of the warmer weather to resume their outdoor badminton games and dancing.

Wuhan has reported just three new confirmed infections in the past 21 days and only two in the past two weeks.

But even as Wuhan came back to life, new imported cases in the far northern province of Heilongjiang surged to a daily high of 25, fuelled by an influx of infected travellers crossing the border from Russia.

On Wednesday, Suifenhe city announced restrictions on the movement of citizens similar to the ones Wuhan has endured.

People must stay in their residential compounds and only one person per family can leave once every three days to buy necessities, and must return on the same day, state-run CCTV reported.

“While the whole country is celebrating the unlocking of Wuhan, few noticed that Heilongjiang is under enormous pressure of dealing with infections coming over the border,” one person wrote on the Weibo social media platform.

“Suifenhe is a small city without any high-level hospitals, how can it handle the huge influx of patients?”

Some 55,000 people were expected to leave Wuhan by train on Wednesday. By early morning, more than 10,000 had left by plane, an airport official said. Flights to Beijing and international locations have not resumed.

People from Wuhan arriving in Beijing must undergo two rounds of testing for the virus.

China is maintaining strict screening protocols, concerned about any resurgence in infections by virus carriers who exhibit no symptoms and infected travellers arriving from abroad.

China’s new coronavirus cases doubled on Tuesday as the number of infected travellers from overseas surged, while new asymptomatic infections more than quadrupled.

New confirmed cases rose to 62 on Tuesday from 32 a day earlier, the National Health Commission said, the most since March 25. New imported infections accounted for 59 of the cases.

The number of new asymptomatic cases rose to 137 from 30 a day earlier, the health authority said on Wednesday, with incoming travellers accounting for 102 of the latest batch.

Authorities do not count asymptomatic cases in their tally of confirmed infections until patients show symptoms such as a fever or a cough. As of Tuesday, 1,095 asymptomatic patients were under medical observation, with 358 of them travellers arriving from abroad.

To stem infections from outside its borders, China has slashed the number of international flights and denied entry to virtually all foreigners. It also started testing all international arrivals for the virus this month.

As of Tuesday, the total number of confirmed cases in mainland China stood at 81,802, including 3,333 fatalities, the National Health Commission said. (Reporting by Brenda Goh in Wuhan and Ryan Woo, Lusha Zhang, Liangping Gao and Se Young Lee in Beijing; Writing by Engen Tham; Editing by Michael Perry and Richard Pullin)