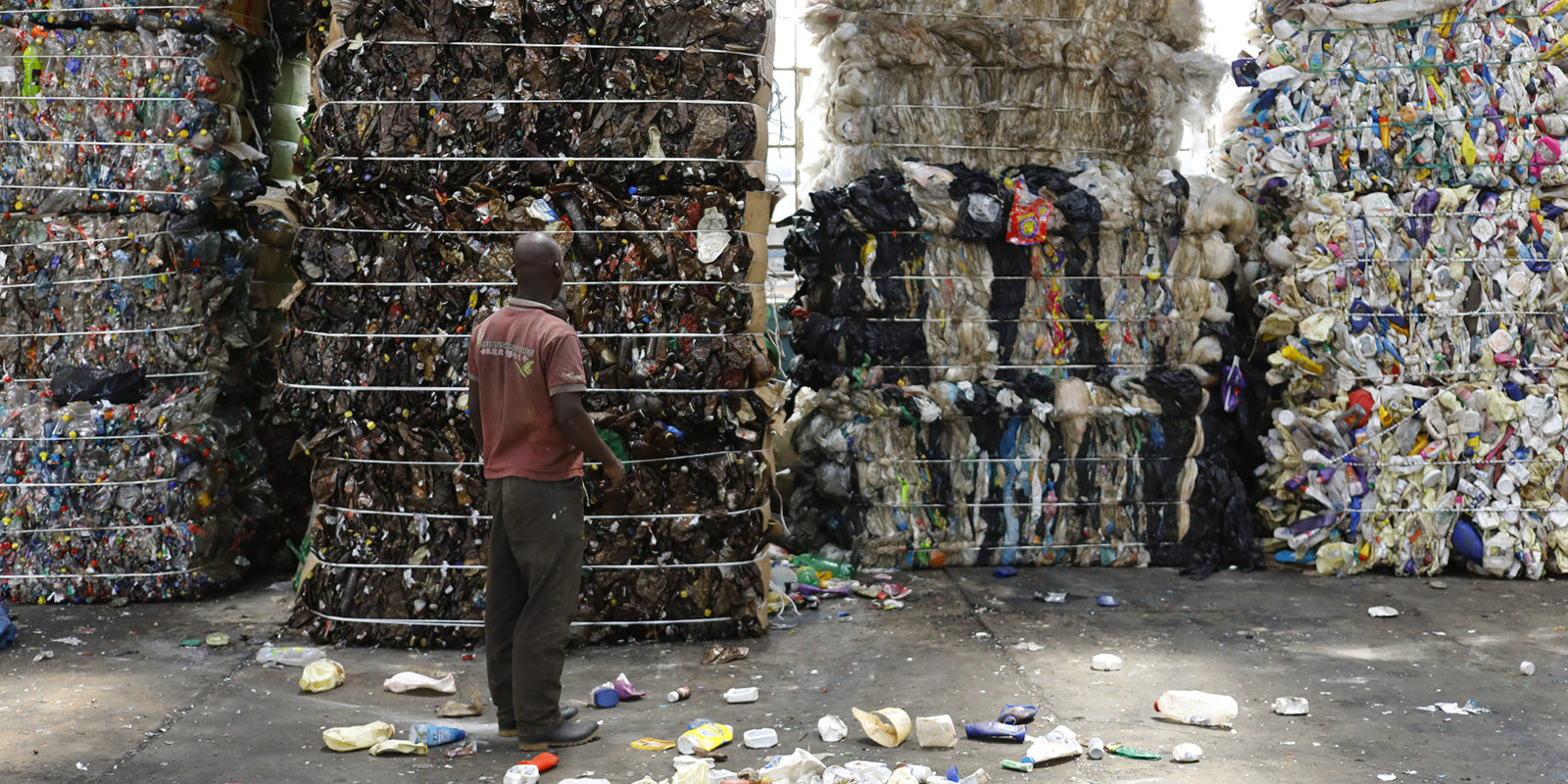 A worker in a recycling plant stands in front of the huge plastic bails that are the end product of the efforts of the plastic collectors on the streets of Johannesburg, South Africa, 19 February 2019. (Photo: EPA-EFE/KIM LUDBROOK)

Recycling reclaimers are now to be included in SA’s Solidarity Response Fund to be provided with emergency food parcels during the lockdown, but they are still not permitted to work. Covid-19 has highlighted the urgency of rapidly moving forward with the integration of reclaimers who form an integral part of our municipal waste management systems.

In the past several days, the government has added street traders and several other categories of workers to the list of people who provide essential services and can continue to work during the lockdown.

Waste pickers who reclaim recyclables thrown away as trash were not included.

But, there is no doubt that reclaimers provide an essential service. This is because they are already an integral part of our essential municipal waste management systems.

As Steven Leeu, a street reclaimer and activist in Johannesburg’s African Reclaimers Organisation (ARO) explained, “We are part of Pikitup. When we can’t work, Pikitup needs to spend more money on trucks to get all of the waste, and with all of the recyclables going to the landfills they will fill up more quickly, which nobody wants.”

Research by the CSIR backs up this point –  it found that reclaimers save municipalities across the country up to R750-million each year in avoided landfill costs.

On the Tuesday before the lockdown, 30 reclaimers in an ARO pilot project collected 4.4 tonnes of recyclables from two Johannesburg suburbs.  Estimates of the number of reclaimers in Johannesburg vary between 6,000 to 10,000. If 8,000 street reclaimers collect similar amounts to those in the pilot, they reduce Pikitup’s collections by 5,866 tonnes every week.

As Pikitup has never officially recognised reclaimers’ contributions in its business plans or included them into its planning, it is unlikely that the company factored in the additional staff and vehicles required for collection given the inability of reclaimers to assist them during the lockdown period.

Government’s failure to recognise that reclaimers are part of essential waste management services is placing additional strain on waste management at a time when we need waste removed as efficiently as possible.

It is also having devastating consequences for reclaimers.

Days after being locked out of the landfill where she has worked for 24 years, Justina Khoele shared that, “Even now, I don’t have money to buy bread. I have nothing, nothing. We are phoning and asking each other where we can find money to buy bread. Nothing.”

Eva Mokoena, ARO chairperson, added that the number of reclaimers without food was “stressing more than this deadly virus that we are so afraid of”.

Until now, it has been left up to ARO to raise funds to buy food and distribute it to reclaimers in areas stretching from Soweto to Midrand. Many of these reclaimers had not had anything to eat for days.

It is therefore significant that on April 3, the Minister of Environment, Forestry and Fisheries, Barbara Creecy, announced that the department was applying to include reclaimers in the Solidarity Response Fund and would provide emergency food parcels in the meantime. This shift in the government’s approach is important both because reclaimers are in dire need and because it is a clear expression of the government’s growing commitment to the sector.

However, reclaimers are still not permitted to work. Many remain desperate to do so, as food does not replace their income. Perhaps the majority of reclaimers in Johannesburg are migrants from other parts of South Africa and the region.

Leeu said that when the ARO crew delivered food last week, “some reclaimers were crying, saying it’s difficult for them to accept food when it is month’s end and they are supposed to send money home. People at home are also hungry.” As it is unclear when food packages from the government will be distributed and if they will be sufficient, support from the public remains crucial.

Others have noted that if the government had built houses and provided all households with access to running water, sanitation and electricity, then there would not be a crisis related to the impossibility of self-isolating or physical distancing in the informal settlements where millions, including reclaimers, live.

Similarly, if reclaimers had been integrated into existing policies, their status as essential workers would not have been in question, and all of the requisite health and safety protections and support would have been in place for them to work safely during the pandemic.

Since assuming office, Creecy has expressed firm support for the integration of reclaimers and the need to ensure that they remain part of our recycling system as it is developed. The pandemic interrupted work on reclaimer integration and struck before this could be given effect.

There are several crucial steps that must be taken to move forward. The first is that a universal basic income grant must be put in place with immediate effect, and all reclaimers who work in South Africa must be eligible to receive it. To work, the grant must be set at a level that enables reclaimers and other recipients to provide for themselves and all those whom they live with and support elsewhere. If this is done, reclaimers will not feel pressured to continue working.

The second is that reclaimers’ status as essential workers must be recognised and formalised, because they are essential to the effective running of the waste management system. Granting reclaimers this official status would not, however, mean simply lifting the ban and allowing them to work. As with all other essential waste management workers, reclaimers who choose to work would need to be provided with protective clothing and equipment, hand sanitisers, hand-washing stations, training on how to work safely in the context of Covid-19, rapid testing, and healthcare. Reclaimers would also require places to sort and store the materials they collect so that they would not take them to the crowded areas where they live, as well as trucks so that they do not need to walk such long distances.

South Africa is in the process of implementing Extended Producer Responsibility (EPR), an approach which will make companies responsible for the waste remaining at the end of their products’ lives.  Currently, reclaimers are only paid a fraction of the value of the recyclables they collect. They are not paid by industry for the labour required to salvage, sort, clean and transport the materials to be sold.

Reclaimers have subsidised the industry’s profits for many years, and now they will be assisting it to meet its targets for removing recyclables from the waste stream. The industry must partner with the government to pay for and provide all of the necessities outlined above. The industry must also provide reclaimers with fair payment for the service of diverting their materials from landfills, fair prices for their recyclables, and emergency income support.

It is crucial that government and industry roll-out an extensive public awareness campaign calling on the public to clean recyclables and place them in separate bags for reclaimers. As Covid-19 can live for eight hours on aluminium and up to four to five days on paper and plastic, people should store these bags for this period (or as long as possible)  before they are put out for reclaimers. The same practice of separation, storage, and disposal in distinct bags must be followed for any medical, hazardous and potentially contaminated materials.  Residents could mark these bags to indicate that they include hazardous waste.

All of these measures (other than those that are Covid-specific, such as rapid testing), should have been in place before the pandemic and will be required when it is over. The pandemic has highlighted the urgency of rapidly moving forward with reclaimer integration.

Regardless of what the government declares, it is likely that many reclaimers will continue to work out of sheer necessity. Reclaimers have long supported the rest of us by separating our recyclables when we have been too lazy to do so. Now it is our turn to support them.

Lockdown is an excellent time to get into the habit of putting clean recyclables into separate bags for reclaimers. ARO has already created recycling programmes in partnership with residents in a number of Johannesburg suburbs. When the lockdown is over, even more communities will be in a position to work in solidarity with reclaimers, integrate them into their neighbourhoods, and establish recycling processes appropriate for the South African context. DM

Melanie Samson is a senior lecturer in Human Geography at the University of the Witwatersrand. She led the Department of Environment, Forestry and Fisheries stakeholder process to develop a national guideline on waste picker integration. She accompanies and provides support to the African Reclaimers Organisation. She writes in her personal capacity.

Liezelle Kumalo and Denys Reva for ISS Today • 3 hours ago