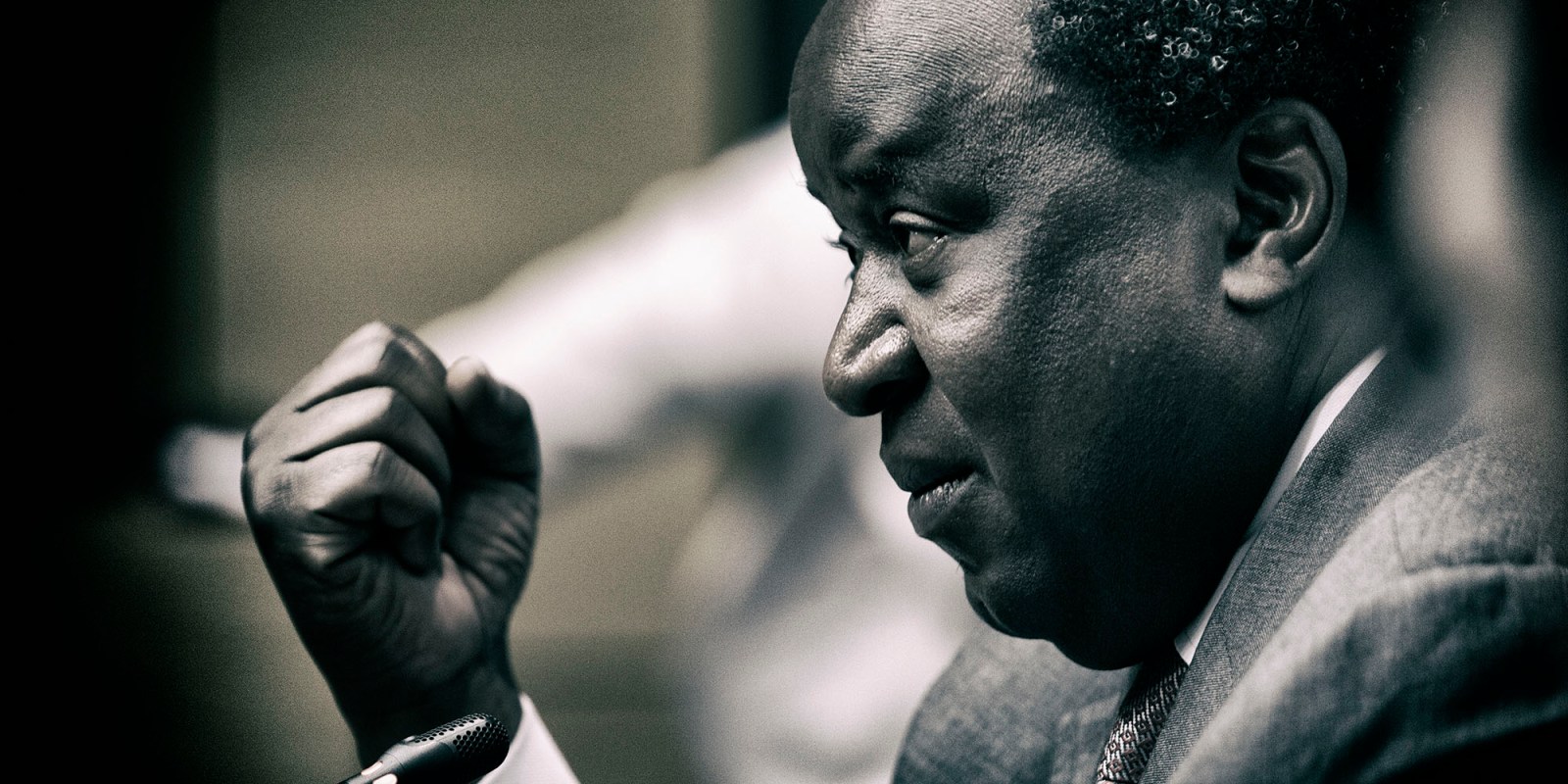 Leaders are having to make it up as they go along in this giant economic experiment called Covid-19. So, best the leadership be up for the job because it is going to require taking well-considered short-term actions that may have huge long-term consequences for the economy. Fortunately, South Africa has a strong trio at the helm.

South Africa had a torrid first week in April, as a flurry of news came in that brought closer the prospect of the government having to seek financial help outside its borders.

But we are not alone and there is a general concern that emerging markets may need to rack up debt to fight the coronavirus pandemic at a time when they can ill afford to do so.

At home, a “triple sudden stop” is how the Bureau of Economic Research described last week’s plethora of bad news. It included a “massive” decline in global demand for our exports, “a lockdown-induced plunge in domestic production (and demand) and a significant contraction in foreign capital inflows on the back of a Fitch sovereign rating downgrade further into junk territory.

“One of these sudden stops at a time would be bad enough,” the bureau commented, “three at the same time are both rare and particularly damaging.”

The succession of lousy news saw the rand race up to just short of R20 to the dollar before coming back to below R19 at the start of this week. The graph below shows the extent of the currency’s depreciation against the dollar this year. 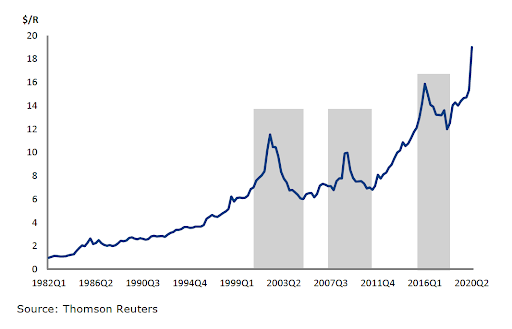 South Africa is not alone in having to brace itself for the economic costs of a lockdown. While lockdowns are likely to be temporary measures, followed by a range of possible recoveries, anything longer than a couple of months of an economic shutdown is likely to impose long-lasting structural damage to the economic fabric of countries. Based on the Chinese experience, a multi-month lockdown seems a distinct possibility and, after that, the jury is still out on how to get the economy up and running again without allowing the coronavirus to send the economy back into lockdown again.

Our ability to ride through the storm and come out on the other side will depend upon the decisions taken by our leadership. Short-term decisions could prove exceptionally costly in the long run. Thus, we need leaders who are strong, calm, level-headed and forward-thinking in how to tackle the short-term challenges without putting the long-term economic outlook at grave risk.

We are fortunate in that President Cyril Ramaphosa, Finance Minister Tito Mboweni and Reserve Bank Governor Lesetja Kganyago have exhibited many of these much-needed leadership skills. Ramaphosa acted quickly to follow in the steps of countries that have shown initial signs of success in flattening the curve, as well as attempting to avoid the catastrophes we are witnessing in Italy and Spain. Under his leadership, the government is looking at alternative ways to address the most significant risks to the trajectory of infections: the homeless and people in the informal settlements.

He has also engaged with other leaders throughout Africa to find a way of working together.

In his weekly note, he says: “There is a common appreciation that this virus, if not contained, could present a very real and serious setback to all our countries as we strive to eradicate poverty, inequality and underdevelopment in already constrained circumstances.”

He admits that the substantial toll the pandemic is inflicting on African economies may result in the continent needing financial assistance that “could run into billions of dollars”.

He adds: “This global pandemic has exposed the fragility of inward-looking and insular political, economic and social systems. It is leading some to call for ‘a new moral economy’ that has people and their welfare at its centre.”

Then there’s Mboweni, who in addition to having experience in managing the finances of the government in the pre-Zuma era, is attempting to be as financially prudent as possible and has faced the steep economic challenges that lie ahead head-on. So, as a country, we go into this crisis having a clear and accurate picture of the state of government finances.

While both Ramaphosa and Mboweni have admitted that South Africa may need to seek financial support, it is encouraging to hear that they are reticent about taking on loans that will put undue pressure on the overly indebted fiscus once the crisis has passed.

Mboweni responded cautiously to a BRICS bank offer to extend a $1-billion loan to put towards the health initiatives in managing and eliminating Covid-19 and a $1-billion loan later this year to get the economy going again. Although Mboweni did leave the door open, he did reiterate he doesn’t like to borrow.

At the helm of the central bank, Kganyago was careful not to evoke panic when introducing the extraordinary monetary stimulus measures to provide liquidity to struggling capital markets in late March.

He tried to keep the announcements under the radar by excluding them from the official quarterly Monetary Policy Statement and introducing them shortly after that. The muted reactions to the news that the SA Reserve Bank would be engaging in quantitative easing by buying government bonds kept panic and the resultant volatility to a minimum.

The real challenge confronting leaders around the world is devising economic exit plans from lockdowns. Economists are considering different scenarios that would get the economy up and running as soon as possible while averting the risk of the virus returning.

For now, China is leading the way on a possible way out, given that it is the only country in the world that, barring a second outbreak, has made it to the other side. It is vigilant in monitoring individuals. Initial indications are that its economy could bounce back quickly. As the graph below shows, Purchasing Managers’ Index manufacturing data has confirmed the classic V-shaped recovery that leaders aspire to achieve. However, it is still far too early to tell if this momentum can be sustained. 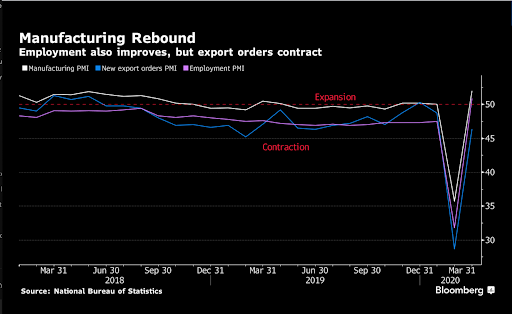 China is returning to work with an external market that is effectively shut down to all but medical equipment to treat infected patients and protect health workers and other frontline staff against further infections. So, unless it redirects significant production capacity into meeting that demand, it will be producing products for which there will be no external demand for the foreseeable future. In that event, it will need to rely on internal consumer demand to keep its economy moving.

For those countries, including South Africa, that are still in the early days of dealing with the pandemic, we have little option but to follow Winston Churchill’s advice when he was leading the UK through World War II:

“As long as we have faith in our own cause and an unconquerable will to win, victory will not be denied us.” DM