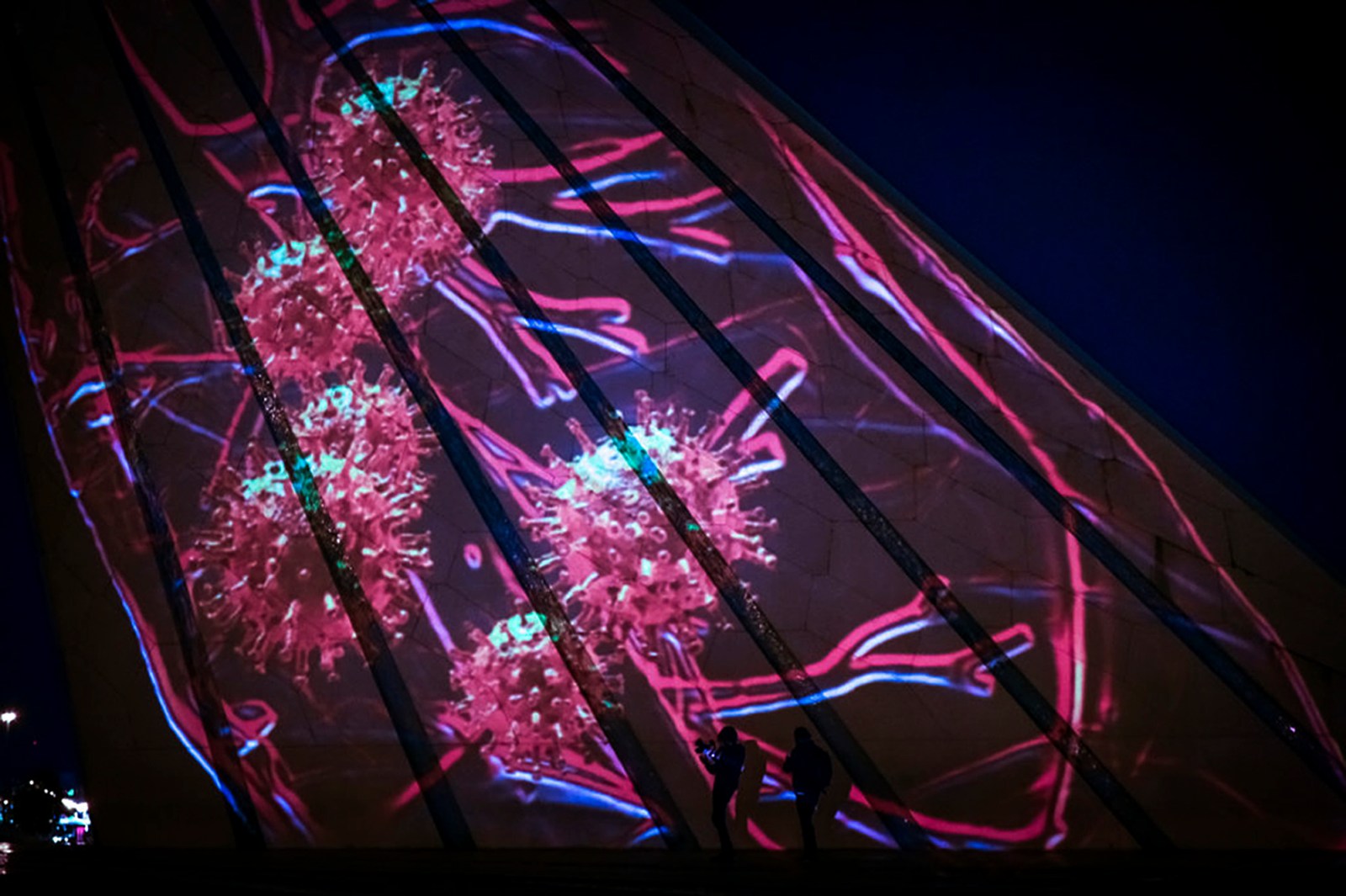 An illumination of the coronavirus on the Azadi tower in Tehran, Iran, designed to show solidarity with the global fight against coronavirus. (Photo: Ali Mohammadi / Bloomberg via Getty Images)

South Africa’s first successful genome sequencing of a locally collected sample of the SARS-CoV-2 virus is now being added to an international database to help better understand the disease.

Knowing the enemy of Covid-19 from a genetic perspective adds to understanding the puzzle of the virus that’s killed more than 70,600 people around the world.

Yesterday (Monday 6 April), South African researchers announced in a report the successful genome sequencing of a local sample of SARS-CoV-2, the virus that’s given rise to the Covid-19 pandemic.

Scientists at the NICD (National Institute of Communicable Diseases) together with colleagues at the South African National Bioinformatics Institute (Sanbi) at the University of the Western Cape were able to collect, analyse, and sequence the virus sample collected from the nose and throat of a patient in KwaZulu-Natal. The patient had returned to South Africa from a trip to Italy at the beginning of March.

This is South Africa’s first genetic fingerprint of a locally analysed virus sample to be added to the Global Initiative on Sharing All Influenza Data (GISAID) records. Currently, there are about 4,000 SARS-COV-2 genetically sequenced virus samples in the database. Each addition boosts this still relatively small number of samples, given that there are more than 1.3 million confirmed infections worldwide, according to yesterday’s data from the Johns Hopkins Coronavirus Resource Center.

Peter van Heusden, Sanbi researcher and co-author of the published report with Dr Arshad Ismail, says the next challenge is for the genome sequencing to be scaled up and speeded up in the country. Congolese and Senegalese scientists have already sequenced 20 and 25 samples respectively since Covid-19 was detected in those countries.

“When we started last month we had both a laboratory and a computer challenge,” Van Heusden says, explaining that they first had to isolate the genetic material of the virus, the RNA, from the patient’s genetic material, the DNA, as the virus was not grown from a lab culture.

“Humans have about three billion ‘letters’ [the nucleotide bases in our DNA, represented in letters of the alphabet] and we know the virus has about 29,000 of these bases or letters. But our second challenge was that our computers are only able to read chunks of this code of about 150 letters at a time. So it was like piecing together shredded bits of information to be able to see the whole picture.

“When we put it together we found that in this patient, the virus had six differences in its 29,000 RNA letters compared with virus samples recorded in China, where the virus was detected at the end of 2019. Six differences is a tiny number and don’t seem to affect how the virus is changing or in the way it produces protein. Proteins are the molecular machines that make cells work and the virus genome is like a recipe book of proteins that the virus needs to invade cells and to make copies of itself,” he says.

But Van Heusden says it’s in identifying these differences that scientists will be able to spot patterns and anomalies in how the virus is possibly mutating, adapting and replicating. It’s why he says there’s an urgency to have more samples sequenced.

“Genetic fingerprinting also means we can organise samples into clusters so we can understand how the disease is spreading,” he says

Van Heusden says accurate information gathering from patients is also critical so that this can be correlated with the genetic sequence results for a more comprehensive picture of the virus.

South Africa’s listeriosis outbreak in the first months of 2018 was one of the first times whole-genome sequencing was used to pinpoint the source of the disease outbreak. Ismail, the co-author of this newly-released report, was at the centre of the listeriosis genome sequencing initiative. The scientists’ efforts meant that the food product – polony – and the factories where the contaminated polony was manufactured could be quickly identified. It helped to contain the spread of the disease.

“Sadly, Covid-19 will not be the only disease that we will need to fight, so we need genome sequencing techniques to reconstruct a kind of family tree of viruses so we can better predict how and when an outbreak may happen in the future, so we can also be better prepared to fight what’s out there,” Van Heusden says.

Sanbi is working with the Africa Centre for Disease Control to train researchers on the continent to use their genome sequencing technique on Covid-19 cases in their countries. DM