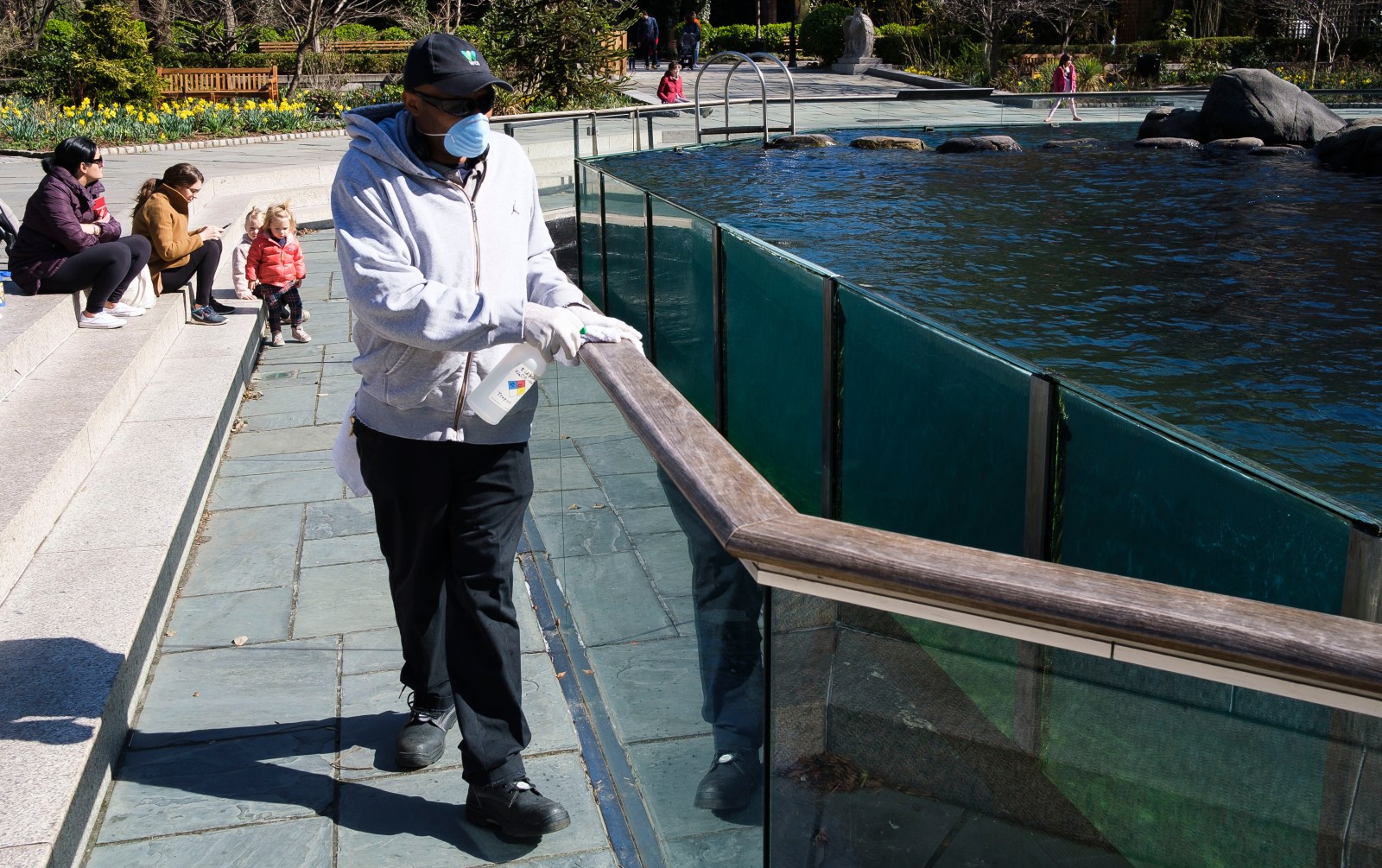 epa08294507 A worker cleans the handrails around the sea lion enclosure at the Bronx Zoo in response to the threat of the coronavirus in New York, New York, USA, on 14 March 2020. The United States declared a state of emergency on 13 March and most major events around the country have been cancelled or postponed to help slow the spread of the disease. EPA-EFE/JUSTIN LANE

April 5 (Reuters) - A tiger at the Bronx Zoo in New York City has tested positive for the respiratory disease caused by the novel coronavirus, in the first known case of a human infecting an animal and making it sick, the zoo's chief veterinarian said on Sunday.

Nadia, the 4-year-old Malayan tiger that tested positive, was screened for the COVID-19 disease after developing a dry cough along with three other tigers and three lions, the Wildlife Conservation Society, which manages the zoo, said in a statement. All of the cats are expected to recover, it said.

The virus that causes COVID-19 is believed to have spread from animals to humans, and a handful of animals have tested positive in Hong Kong.

But officials believe this is a unique case because Nadia became sick after exposure to an asymptomatic zoo employee, Paul Calle, chief veterinarian at the Bronx Zoo, told Reuters. Calle said they did not know which employee infected the tiger.

“This is the first time that any of us know of anywhere in the world that a person infected the animal and the animal got sick,” Calle said, adding that they planned to share the findings with other zoos and institutions. “Hopefully we will all have a better understanding as a result.”

While the other tigers and lions were also exhibiting symptoms, the zoo decided to test only Nadia because she was the sickest and had started to lose her appetite, and they did not want to subject all the cats to anesthesia, Calle said.

“The tigers and lions weren’t terribly sick,” he said.

Nadia underwent X-rays, an ultrasound and blood tests to try to figure out what was ailing her. They decided to test for COVID-19 given the surge in cases in New York City, the epicenter of the outbreak in the United States.

The first tiger at the zoo, which has been shut since mid-March, began showing signs of illness on March 27, according to the U.S. Department of Agriculture National Veterinary Services Laboratories, which performed the test. (Reporting by Nathan Layne in Wilton, Connecticut; Editing by Daniel Wallis)