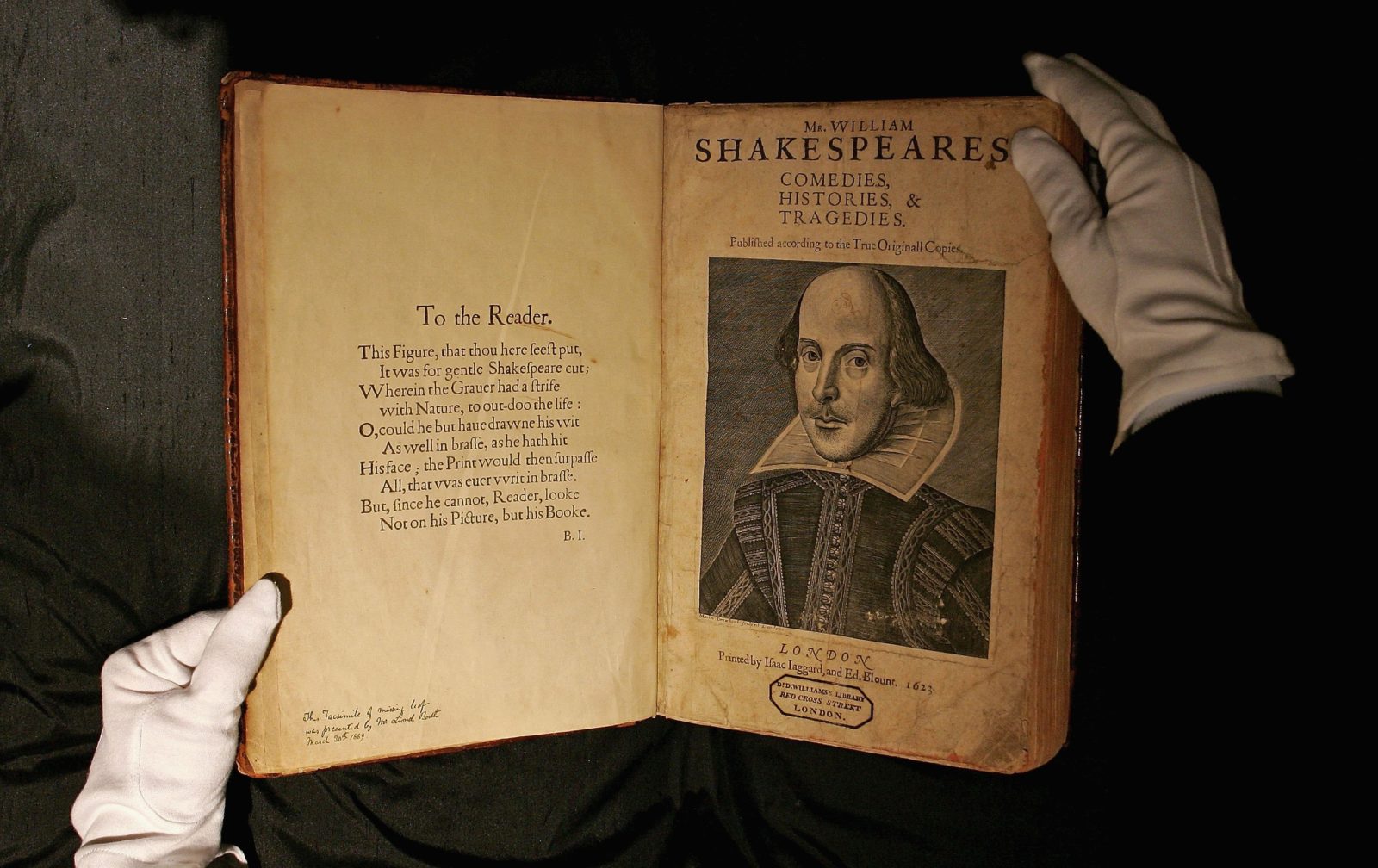 LONDON - JULY 07: A Sotheby's employee handles a copy of William Shakespeare, The First Folio 1623 on July 7, 2006 in London, England. The most important book in English Literature, the First Folio edition of Shakespeare?s plays (1623), will be offered in Sotheby's sale of English Literature & History on July 13th, and is estimated to fetch GBP 2.5-3.5 million. (Photo by Scott Barbour/Getty Images)

If you thought a global pandemic – resulting in many people dying, economic devastation and collective fear and uncertainty about the future – could save you from hustle culture, you are mistaken.

By now, many people are aware of Rosanne Cash’s tweet on 13 March – “Just a reminder that when Shakespeare was quarantined because of the plague, he wrote King Lear”. The writer and musician’s tweet was retweeted about 51,000 times, gained 250,000 likes and roughly 3,000 replies, and started an online conversation about work ethic during lockdown, shutdown, social distancing and quarantine.

Not long after Cash’s tweet, Tim O’Brien, a former senior campaign adviser to Michael Bloomberg, tweeted that, “If social distancing is getting you down, just remember that Shakespeare most likely wrote King Lear, Macbeth, and Anthony and Cleopatra during a plague-inspired quarantine between early 1605 and late 1606”.

There are numerous examples of online posts, articles, messages, and tweets about how one should be productive during shutdown or self-isolation. These messages are not confined to the US – the birthplace of hustle culture. Even here in South Africa, hustle culture persists, accompanied by its usual dose of billionaire worshipping and making a religion of positive thinking. In fact, several messages of  “inspiration” have reminded us that staying positive is what differentiates you from others and that there are always opportunities, even in crisis, as during the last global recession when some people became very, very wealthy.

In a piece titled “All the Ways the Internet is Pushing Hustle Culture during Quarantine”, Rachel Charlene Lewis demonstrates how doing nothing is not encouraged, even during an international pandemic. In the context of discussing Shakespeare’s “work ethic” and social media as ground zero for peddling hustle culture, she states:

“Beyond these needless comparisons to one of history’s most beloved playwrights, pushing hustle culture – offering tips for doing more work remotely and telling recently laid-off employees how to leverage their newfound time off – only serves to illustrate the bizarre ways those of us who are not millionaires and billionaires are encouraged to sacrifice our health for a dollar. We need sick time to truly recover from the physical, emotional, and mental toll that Covid-19 is wreaking on all of us, not to finally write that book proposal or kick off that side gig.”

If you are lucky enough to not know what hustle culture is or you simply need a reminder of its idiocy: hustle culture is the belief that you can only succeed by exerting yourself at a maximum capacity professionally. Everything you do must somehow be linked to, or in the service of, productivity.

As New York Times journalist Erin Griffith asserts, “it is obsessed with striving, relentlessly positive, devoid of humour, and once you notice it – impossible to escape”.

Hustle culture is results-orientated. It is ambition as lifestyle. It is about action, grit, and progress. It is about never stopping and never giving up on your goals. Every failure only makes you stronger and so on and so on. Having one job isn’t enough, you have to have multiple income streams, and passions and hobbies should be profitable. If it doesn’t serve a goal, it’s irrelevant. Even worse, it’s a waste of time.

Lewis’s sentiment is echoed by Jenny Odell in her 2019 book How To Do Nothing: Resisting the Attention Economy. Odell reminds, as many have before, that our attention has become a commodity. In order to make money, tech companies need to keep us online even longer through social media, an endless number of apps, and professional platforms.

Odell states that, “In a situation where every waking moment has become the time in which we make our living, and when we submit even our leisure for numerical evaluation via likes on Facebook and Instagram, constantly checking on its performance like one checks a stock, monitoring the ongoing development of our personal brand, time becomes an economic resource that we can no longer justify spending on ‘nothing’.”

In the same vein, in an influential New York Times article in 2019, Erin Griffith states that, “I saw the greatest minds of my generation log 18-hour days – and then boast about #hustle on Instagram”. In the context of the cultivation of hustle, she asks: “When did performative workaholism become a lifestyle?”

And it is performative indeed – it has become very difficult to escape hustle culture as every moment is photographed and shared online in an effort to show how virtuous one’s work ethic is. For Griffith, hustle culture is a swindle – “convincing a generation of workers to beaver away is convenient for those at the top”.

Further, although research has shown that long hours don’t improve productivity or creativity, “myths about overwork persist because they justify the extreme wealth created for a small group of techies”.

Some hustle influencers do advocate for self-care – of course, this is only to the extent that people need some sleep and exercise to stay healthy, so that they can hustle further and reach their life’s purpose: usually some commercially crafted goal.

What hustle culture is really about is the “surrender of everything to market forces and the sacrifice of all life to consumer culture,” writes David Masciotra in The Atlantic. He further asserts that even though hustle culture might at times be enriching and energising, it is ultimately empty, depressing and destructive.

Although routine, productivity and work may help some people alleviate their anxiety during the coronavirus crisis, feeling guilty because you are not designing an app, doing a course in digital marketing, starting a business, or writing some of the best plays ever written, will only be detrimental to your health and well-being. Many of us will oscillate between fear and anxiousness, optimism, sadness and searching for comfort. We will need to address our needs, whatever they may be and take care of ourselves, nothing more.

A few weeks after Cash’s tweet, some voices of reason have emerged. For example, Chris Bailey, a productivity consultant (yes, there is such a thing), and the author of Hyperfocus: How to Manage Your Attention in a World of Distraction, stated that, “The idea that we have so much time available during the day now is fantastic, but these days, it’s the opposite of luxury. We’re home because we have to be home, and we have much less attention because we’re living through so much.”

Several authors have suggested strategies to resist hustle culture and its effects, such as burnout and depression. Suggestions range from doing nothing, to finding more meaningful pursuits, and focusing on relationships, family and passions.

The US cultural historian and social critic Morris Berman suggests more detachment from materially measurable pursuits and to follow that which “enchants” – “what sings to you?” In an interview with Berman in 2013 he was asked why US culture seems to be so results-obsessed and addicted to movement, action, speed, and “progress”. Berman explained that:

“This is, in some ways, the subject of my book Why America Failed. America is essentially about hustling, and that goes back more than 400 years. It’s practically genetic, in the US, by now; the programming is so deep, and so much out of conscious awareness, that very few Americans can break free of it.”

He adds: “It’s also especially hard to break free of that mesmerisation when everyone else is similarly hypnotized. Groupthink is enormously powerful. Even if it occurs to you to stop following the herd, it seems crazy or terrifying to attempt it. This is Sartre’s ‘bad faith’, the phenomenon whereby a human being adopts false values because of social pressure, and is thus living a charade, an inauthentic life. It’s also what happens to Ivan Illych in the Tolstoy story, where Ivan is dying, and reviews his life during his last three days, and concludes that it was all a waste, because he lived only for social approval.”

For Berman, most of us don’t realise how the corporate-commercial-consumer-militarised-tech-surveillance life has wrapped its tentacles around our throats, and is squeezing the life out of us – “We merge with ‘our’ narrative so as to have some measure of safety in our lives; but what if it’s a death-oriented narrative?”

Further, hustle culture (and by implication the US self-help genre) seems intent on denying emotions, sadness included. For Berman, when we neglect to accept sadness, we miss out on “depth” and “to hide from sadness” is to live superficially. Resisting the culture of hustle requires cultivating the courage to live real, independent, and authentic lives, lives that include sadness, as the “bottom line is that life has a tragic dimension”.

This last point, specifically, is important in resisting a culture that glorifies wealth, that takes optimism and positive thinking to the point of irrationality, and that insists on life as performance; life lived for and to others on social media. For Berman, literature can help in cultivating an authentic life – but “not the lit of heroic stories of derring-do, but just the opposite: literature that depicts difficult decisions and quiet acts of integrity”.

Hustle culture, apart from ignoring vast systemic inequalities in part created by modern ideas of progress and individualism (some people have no option but to hustle and is it possible to hustle when your most basic human needs aren’t met?), it also reduces life to getting and spending. There is no time left for sadness, reflection, slowness, and activities imbued with love – values much needed in times of crisis.

Cash and O’ Brien and everyone else that reminds us to be productive during Covid-19 misses a crucial point: Shakespeare did not write to be productive. He wrote because it is what gave his life meaning. Writing was his way of living.

In writing a manifesto for “Slow Thought”, Vincenzo di Nicola writes that “We must challenge the notion of development at all stages of life, and imagine the course of life differently than through speed or milestones.” This requires practices that have no object, no measurable result “that allow us to live more fully in an atemporal present, freed from the burden of an imperfect past or the futile promise of a redemptive future”. In other words, do whatever sings to you. DM/ ML