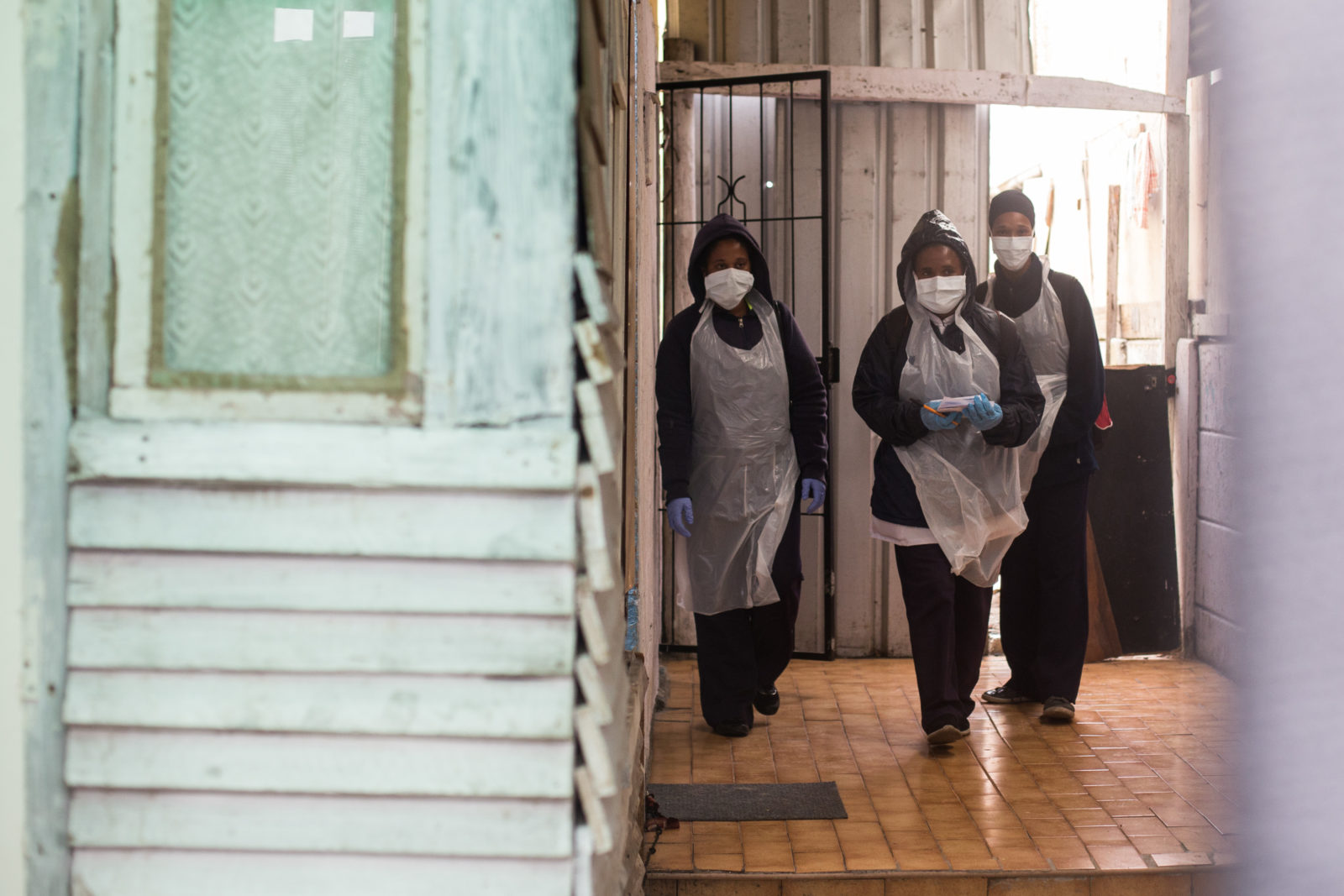 Volunteers from The Caring Network and The Tehillah Community Collaborative walk door-to-door in Valhalla Park, Cape Town, completing government health questionnaires with residents. If anyone has Covid-19 symptoms, they are directed to nearby testing centres. Photo: Ashraf Hendricks

Testing for Covid-19 in South Africa will hopefully be massively increased in the next few weeks. A machine called the GeneXpert, currently used to diagnose tuberculosis (TB), will be used by the state to test for coronavirus.

Minister of Health Zweli Mkhize has expressed concern that not enough testing is being done. “Our testing criteria are reactive and restrictive. This means we don’t have a true picture,” he has said in his daily briefing on the Covid-19 epidemic.

South Africa had conducted over 50,000 tests by 4 April. This compares well to, say, Brazil which has conducted about the same number of tests but has a much bigger population. But our capacity is far behind Australia (nearly 300,000 tests), South Korea (over 460,000 tests) and most European countries.

Also, in the early stages of the epidemic here it was clear who to target: people with symptoms of Covid-19 who were returning from overseas. Now it is much less obvious and we risk missing outbreaks unless we can do much more testing in many more communities.

The GeneXpert, developed by an American company called Cepheid, is key to this. The smallest version of the machine is the size of a desktop computer. It takes four cartridges, where each cartridge is loaded up with sputum from a patient and chemical reagents which allow the machine to detect genetic material of TB, or now coronavirus. It takes 45 minutes to give a result.

Prof Bavesh Kana, director of the Centre of Excellence in Biomedical Tuberculosis Research, said the GeneXpert is a safe, fast and easy to use system.

He explained that a health worker takes a sample from the patient and puts it into the cartridge. Within the cartridge the genetic material of the coronavirus is released, but it is safe because it is a closed system. “The RNA of the virus is converted into DNA. This needs to be done because it is a DNA test. Then certain regions of the genetic material are identified during the test. If the genetic identification is made, the test will be positive,” Kana explained.

The tests can be done in some of the mobile laboratories that the health department is rolling out, though electricity is needed.

The Covid-19 test chemical reagents are due to arrive in the country this month.

While this is all good news, Cepheid has come under US-based activist organisation Treatment Action Group (not to be confused with the local Treatment Action Campaign). It has demanded that Cepheid should immediately lower the cost of its cartridges to $5 each for developing countries. “By pricing its Covid-19 test at $20 for developing countries — twice the current price of the same cartridge when used to diagnose TB — Cepheid gives the appearance of profiteering at a time when the most widespread possible use of the test could help to slow the spread of the pandemic and reduce the number of deaths in these countries,” said Mark Harrington, the organisation’s Executive Director.

Another concern is that using the machines for Covid-19 will impede TB testing. Asked about this Kana said: “The GeneXperts are very effective and they can run for 24 hours, if needed. It is also very early in the pandemic, and it is hard to say now, how the system will respond.”

Beyond the GeneXpert, laboratory capacity is also being increased. Dr Kamy Chetty, Chief Executive Officer, of the National Health Laboratory Service (NHLS) said they currently have six laboratories where Covid-19 tests are done. By late April this will be increased to nine. The mobile laboratories will bring patient samples to these facilities. Most tests are still being done in the private sector.

Minister Mkhize is also hoping that antibody tests will be usable in South Africa soon. These can be done by nurses at a clinic or hospital, are usually much cheaper than lab tests and give results in less than 20 minutes. But they have a shortcoming. Because they test for antibodies, not the virus directly, a person who has been infected and recovered will test positive. A further lab test that checks directly for the virus would then need to be conducted to see if they are still infected (and infectious). Also it can take 10 to 14 days from infection for antibodies to develop. Nevertheless, antibody tests, when they eventually are used, will help surveillance of the epidemic and contribute to our understanding of it in South Africa. DM

Gary Lemke in Tokyo
Save 2 mins