SA’s 2021 local government elections are almost certain to be marred by political violence, assassinations and instability. Over the past decade, municipal elections have proven significantly more volatile than general elections, in part because local-level political offices present opportunities for unscrupulous officials to enrich themselves by controlling lucrative government contracts.

This article first appeared in the Global Initiative Against Transnational Organised Crime’s monthly Eastern and Southern Africa Risk Bulletin. The Global Initiative is a network of more than 500 experts on organised crime drawn from law enforcement, academia, conservation, technology, media, the private sector and development agencies. It publishes research and analysis on emerging criminal threats and works to develop innovative strategies to counter organised crime globally.

Amid South Africa’s imploding economy and rising unemployment, politics can offer a way out of poverty. This, in addition to factional infighting within the African National Congress (ANC) and lack of accountability throughout all levels of government, is likely to lead incumbents to fight with more desperation to retain their positions and therefore render the 2021 elections more violently contested than ever.

Despite President Cyril Ramaphosa’s commitment to cleaner governance, cadre deployment (the placement of unqualified but loyal cadres in public administration and state-owned enterprises by the political elite), corruption and political patronage networks – which often operate in the same manner as criminal syndicates – continue to divert funds away from much-needed basic services and infrastructure maintenance and development.

During the 2016 local government elections, at least 60 people were murdered across KwaZulu-Natal (KZN), and politically linked killings there have risen steadily. There are early signs of political turbulence as communities brace for branch and regional elections ahead of the ANC’s National General Council, to be held later this year, Covid-19 willing. 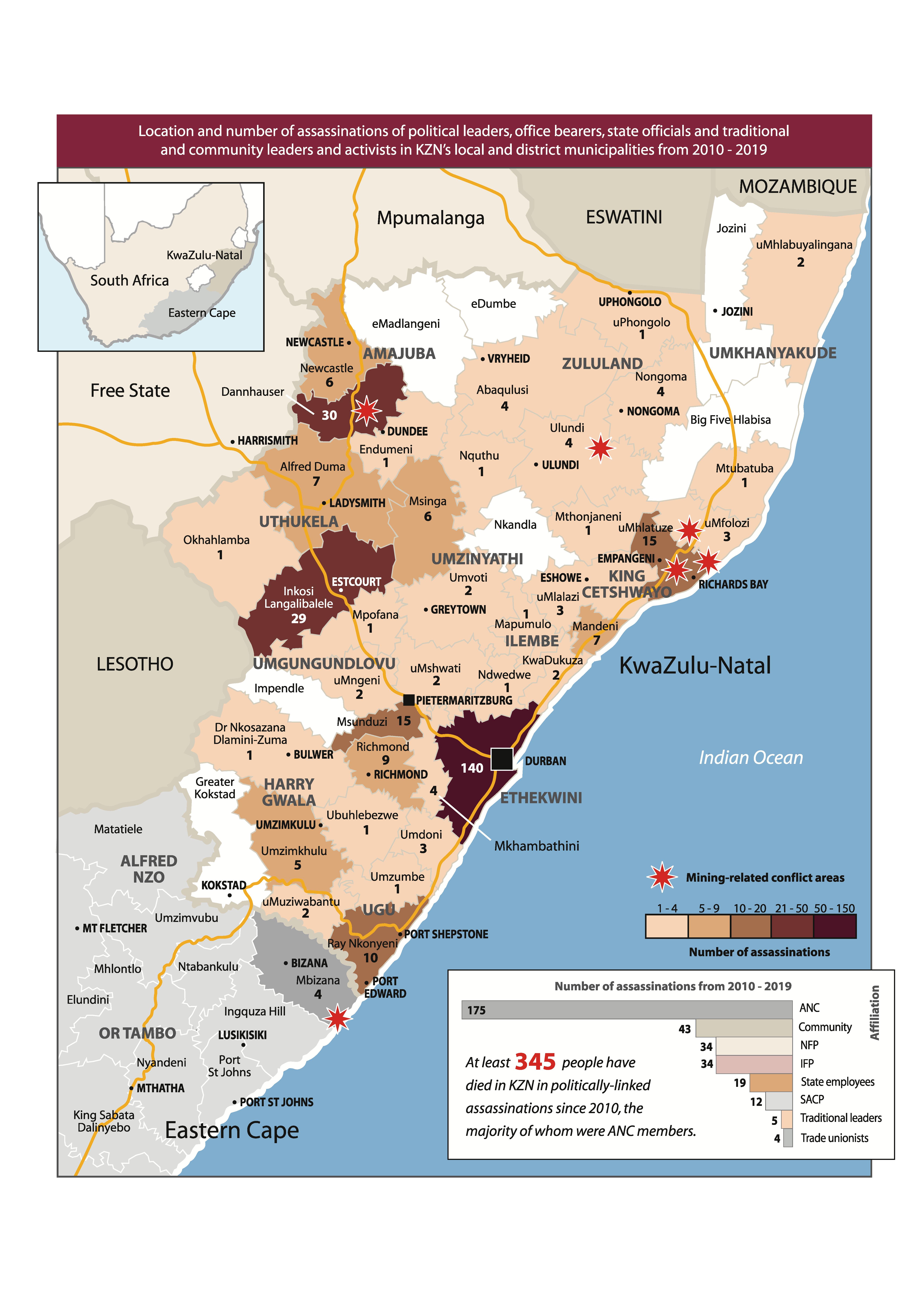 Power struggles within the governing party have had a knock-on effect at the local level. Respected local community leaders are becoming increasingly reluctant to stand as candidates in next year’s elections, especially if it means aligning themselves with the ANC. For many poor communities, the ruling party has become synonymous with violence and corruption.

When principled, committed individuals who could bring much-needed vitality and change to what has become a toxic political arena are deterred by the threat of violence from representing their communities, it poses a significant threat to political diversity, the representational system of governance, electoral credibility and the future of South Africa’s democracy.

Mkhokeli Ndamase is a community activist from the rural Eastern Cape who has fought since 2009 against corruption and for his people’s right to basic services, particularly water. Bhekizizwe Zungu is a senior South African Communist Party (SACP) leader at Glebelands hostel in Umlazi, south of Durban. Both names have been changed to protect their identities. A vast and squalid low-cost housing complex built to accommodate migrant labour during the apartheid era, Glebelands gained notoriety as a base for hitmen who operate across the province and beyond. Between 2015 and 2016, violence rooted in intra-party conflict flowed from the hostel across the province, leaving more than 130 people dead, some of them councillors from other parts of KZN.

Both Ndamase and Zungu are former ANC activists. Their communities remain loyal to the ANC – despite its many failed promises, corruption and scandals – not because they harbour lingering love for the party but in the absence of what they feel are viable political alternatives. Fear also plays a part. 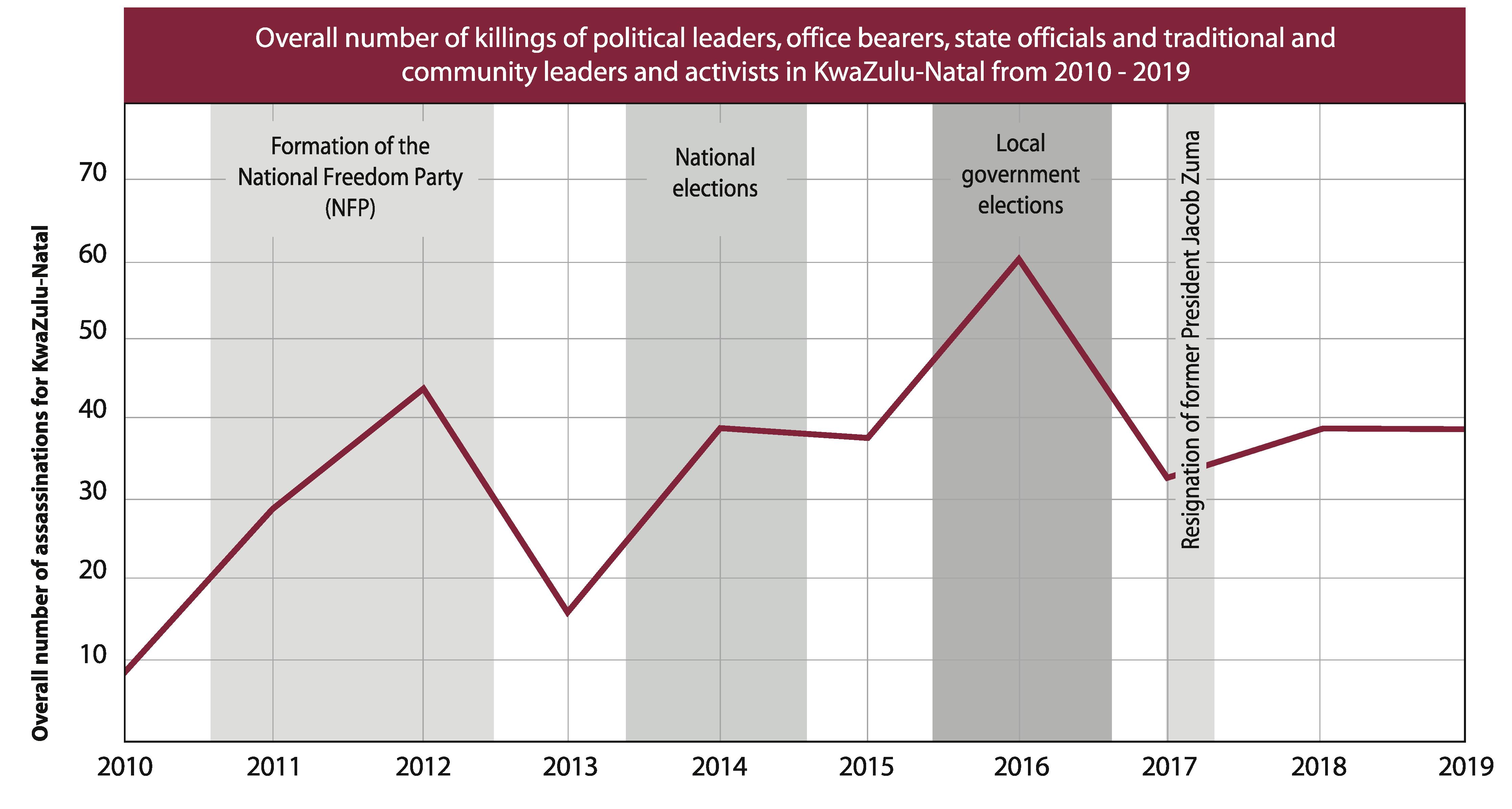 Both men are acutely aware that serving their communities could be fatal for them and their families. Whereas they would previously have leapt at political office, they now say they are worried that any official association with the ANC may damage their reputation and credibility among their constituents. They are also concerned that their attempts to improve their communities’ lives may become subject to the party’s factionalism.

Ndamase, who previously mobilised his community to oppose a local mining project, says he has received death threats (in the form of photos, sent via WhatsApp, that appeared to show suspects shot dead by police), and was assaulted by police members, allegedly at the behest of local politicians and the mine owner. Similar incidents have been widely reported by other communities who mobilise around housing issues or against mining.

When asked if he thought he would face much opposition from the incumbent ward councillor, Ndamase replied: “He’s vowed to fight to the end; he has nothing else. If he comes back to the community he will be a nobody. And remember, he has friends in high positions with all the resources who put him there. They want him to stay so they can still get tenders. This is what I am up against.”

Both men fear their nomination could be an attempt to co-opt them and neutralise their stance against corruption, especially relating to lucrative tenders. Zungu put it like this: “The SACP – although it is a member of the alliance – we can throw stones at the ANC. If I am inside the ANC, I can no longer throw stones.”

From 2015 to 2016 at least 12 SACP members were killed at Ntshanga, just outside Durban, in violence linked to the SACP-ANC leadership contest at the city and regional levels. Although some prominent SACP leaders have since been assimilated into President Cyril Ramaphosa’s Cabinet, others claim they were purged from local government positions by forces loyal to Ramaphosa’s predecessor, Jacob Zuma, who is due to stand trial on corruption charges. Communities continue to bear the brunt of the ANC’s obsessive factional battles, unceasingly subjected to divide-and-rule tactics, manipulation and misinformation while the bodies pile up.

Another worrying factor is the militarisation of democratic processes. In remote rural areas, far from media attention, electoral freedom is under fire.

For many years Ndamase’s community has agitated for improved access to basic services, especially clean water. His village relies on a filthy trickle it is forced to share with livestock. Even this meagre supply is now threatened by local quarry operations. His community believes money meant for water infrastructure development has been misappropriated. Hitmen, including those linked to the taxi industry, are used to silence witnesses in corruption investigations, undertaken, according to Ndamase and his community, by an increasingly complicit local police force.

After years of being ignored by government departments, Ndamase’s community declared they would not participate in the 2019 general elections. According to Ndamase, this elicited a heavy-handed response from the government. With photographs and real-time running commentary via WhatsApp, Ndamase described events at his village during a voter-registration weekend held in January 2019. His observations, including what appeared to be a clear case of political interference in Independent Electoral Committee (IEC) operations, are instructive in their portrayal of what democracy has come to mean for many poor communities:

“The ward councillor is driving around the village escorted with heavily armed police, the very same unit that beat me, and other unknown vehicles. They are putting up IEC banners. People heard him [the councillor] saying: ‘People will go to register whether they like it or not, [he] is going to make sure of that.’

“People are running for their lives or locking themselves in their yards, nobody knows what is going to happen. The police are supposed to protect us… It’s like they are forcing people to go and register.”

Ndamase confirmed there were no protests – the community had simply stayed away. His photographs showed roads empty of all but police vehicles, a deserted registration station and a community in lockdown.

At least three assassinations, as well as the disappearance of one of Ndamase’s associates ahead of the ANC’s 2017 elective conference, have left in him with little doubt as to the danger he faces, should he agree to represent his community in next year’s elections. He put it like this:

“They wanted to kill me when I was fighting the ANC for water for my people. Now they want me to fight to change the ANC from inside. They don’t know who to turn to anymore. What must I do? I can’t turn my back on them. But either way, the ANC will probably kill me.”

This does not bode well for the 2021 polls or the participation of principled individuals in the critically needed restoration of what has become a lethal political arena. The threat to democracy cannot be overstated.

Frequent elections – local, national and the ANC’s internal elective conferences – subject communities to high levels of tension and volatility that can be easily exploited and channelled by unscrupulous politicians against rivals. They also undermine municipal administration.

Data gathered by the Global Initiative Against Transnational Organised Crime suggests there is significant overlap between ANC-led municipalities that experience regular community protests, local councils that are financially distressed or have been placed under administration, and elevated assassination numbers. Analysis of circumstances around some of these killings suggests that protest leaders are systematically targeted to silence their usually justified demands for improved service delivery and an end to corruption, reinforcing perceptions of a predatory elite that is increasingly removed from and deaf to the needs of the poor majority.

The eThekwini municipality in KZN has seen at least 140 assassinations over the past 10 years. This shocking number reflects the deadly nexus between intra-party conflict, corruption, maladministration, the proliferation of Mafia-like business forums, the ANC’s unwillingness to take action against its own, an inadequate and sometimes partisan criminal justice system, and an administration weakened by politically compliant appointees who serve their own instead of citizens’ best interests.

In 2010, nine political assassinations were recorded in the province. Since then, figures have risen steadily each year, peaking immediately before, during and after municipal elections, with each peak bringing a progressively higher death toll. During the 2016 elections, this figure had reached 60. Although killings drop off slightly after election years, the consistently rising trajectory suggests 2021 could be the most bloody yet. 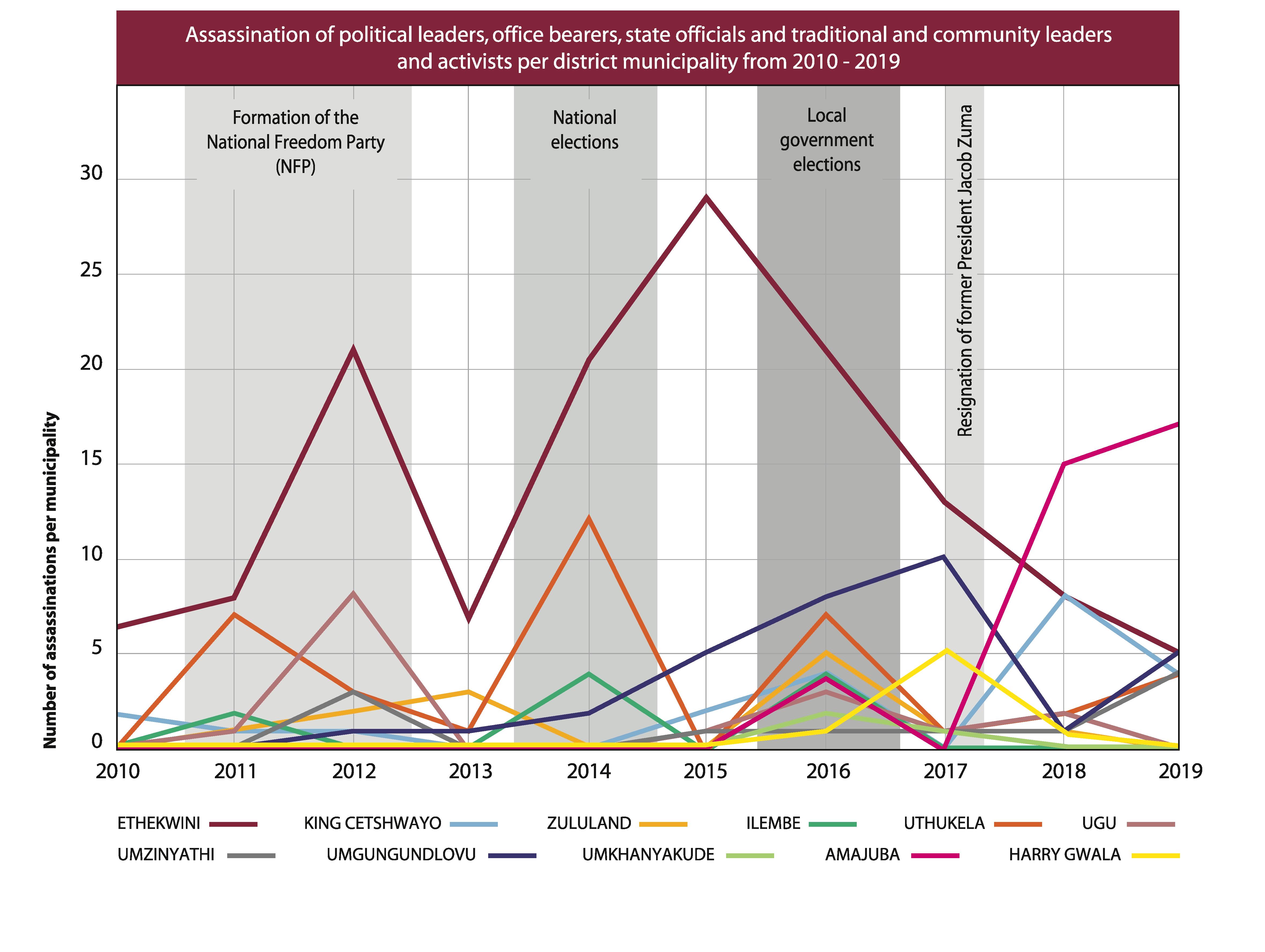 In the first three months of 2020, at least six people have already been killed, including councillors, hostel leaders and mining-affected community activists. This suggests that the government’s failure to arrest KZN’s deadly assassination trend has led to murder becoming the ANC’s preferred means of conflict resolution in the province. All these issues, together with easy access to illicit firearms (including state-issued guns), are conducive to the growth of South Africa’s killing economy.

Political responses to KZN’s killings have given rise to the perception that the government prioritises (or likes to be seen to prioritise) investigations into the murder of politicians, while ordinary people (who may be killed by or on the instruction of politicians) may be murdered with impunity. However, there is little to suggest any broader commitment by the government or the police to reversing the killing trajectory.

Last year the National Prosecuting Authority withdrew charges against senior politicians implicated in several high-profile hits, and the provincial government has done nothing to implement recommendations made by the Moerane Commission of Inquiry into KZN’s political killings. DM